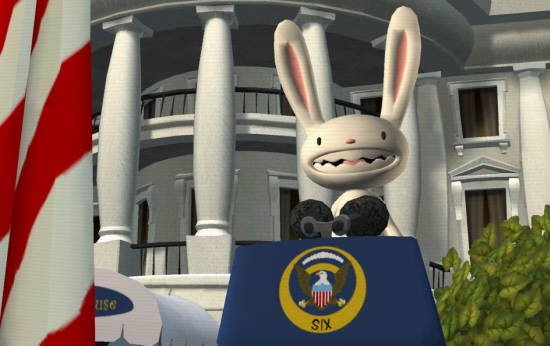 Holy jumping weasel fritters on a hot cross bun! Now all you people who have Macs don’t have to kill yourselves over your previous inability to play the Sam and Max episodes (they’re really good)!

Today, Telltale games officially confirmed a retail version of Sam and Max Season One will be made available to Wii owners come Fall 2008. Collecting the first six episodes of the episodic series in one singular package, Season One will be published by Dreamcatcher/The Adventure Company in North America, and by JoWooD in Europe.

I dunno what else to say, except that I’m incredibly happy that all the people (both of you) who asked me how to play the Sam and Max episodes without buying a PC finally have a way. The full press release, which you can check out after the jump, unfortunately doesn’t say anything about downloadable episodes on WiiWare, but hey — baby steps, baby steps.

, April 4, 2008 – As part of a continuing effort to extend episodic gaming to new audiences and platforms, Telltale is officially announcing that Sam & Max Season One will be coming to Nintendo’s Wii™ console. This collection of the first six Sam & Max episodes will introduce a brand new audience to the popular and critically-acclaimed game series. The Wii release is expected to ship to retail stores worldwide this fall, thanks to a partnership between Telltale and JoWooD/DreamCatcher.

Sam & Max’s journey to the Wii platform has been fueled by fan excitement. Just before the episodic series’ PC debut, fans launched an email campaign clamoring for a Wii version of the series. Continuous rumors and rampant speculation online led to developer and publisher enthusiasm for the title. With Telltale now focusing on console development in addition to PC, the company can finally bring Sam & Max to Wii in response to this overwhelming demand.

The Sam & Max episodes let players guide the Freelance Police through a series of bizarre—and often sidesplitting—mysteries. Sam & Max Season One has already experienced enormous success, both as an episodic series available for download through Telltale’s website and other services, and at retail. Honors include Adventure Game of the Year from GameSpy and IGN, and inclusion on Games for Windows’ list of Top 10 Games in 2007.

Nintendo’s Wii is a perfect fit for the Sam & Max games. The series’ story-driven gameplay and episodic structure has often been favorably compared to TV sitcoms. The new Wii version will present Sam & Max in a format that can be enjoyed from the comfort of the living room, either alone or with a group of friends—a setting perfectly suited for this kind of experience. The game’s easy-to-use interface has a low learning curve, making it ideal for the Wii’s broad consumer audience.

Sam & Max first hit the indie comic scene in 1987, courtesy of franchise creator Steve Purcell. In the twenty years since, they have appeared in an animated TV series, an Eisner-winning webcomic, and numerous video games. The success of the Sam & Max episodic series has fueled a renaissance for the franchise. Telltale recently released a special 20th Anniversary Edition of the complete Sam & Max comic collection, Surfin’ the Highway, after nearly a decade out of print, and a DVD box set of the 1997 animated series has just been published by Shout Factory. Both are available in Telltale’s online store (www.telltalegames.com/store), along with other Sam & Max merchandise.

Sam & Max Season One for Nintendo Wii will be published by Dreamcatcher/The Adventure Company in North America, and by JoWooD in . In addition to English language, the game will be fully localized in French and German, and subtitled in Italian and Spanish. All versions are expected to ship during the fall 2008 season.

Sam is a six-foot dog in a baggy suit sporting a trombone-sized .44 hand-cannon. Max is a three foot “rabbity thing” with a saw blade grin and the impulsive nature of the average piranha. Together they patrol the sticky streets of a fantastical , righting wrongs, pummeling perps, and ridding the urban landscape of the shifty legions of “self-propelled gutter trash” that litter their streets. Sam & Max have appeared in comics, video games, an animated TV series coming soon to DVD, and an Eisner award-winning webcomic.

Telltale is pioneering new forms of interactive entertainment, building upon strong foundations in both traditional and new media. Founded in 2004 by industry veterans with decades of experience, the company has quickly become the leading online episodic gaming publisher and developer, delivering award-winning interactive experiences that emphasize engaging stories, strong characters, and rich worlds. Telltale is establishing a regular, ongoing schedule of online episodic series, across all major gaming and entertainment platforms and channels. Telltale’s games include the Sam & Max game series, episodes adapted from Jeff Smith’s epic Bone graphic novels, and games based on television’s popular CSI program in partnership with Ubisoft. Telltale has built a robust digital distribution channel at www.telltalegames.com, and also publishes its games with select partners.

About JoWooD Productions Software AG
JoWooD Productions Software AG (ATXPrime: JWD) is listed in the Prime Market segment of the stock exchange. JoWooD is a leading publisher of computer and videogames, releasing international acclaimed, high-quality titles for all existing and future gaming systems. JoWooD games are distributed worldwide by an efficient net of distribution partners. Visit https://corporate.jowood.com for more information.

DreamCatcher Inc. is a leading publisher and distributor of interactive entertainment software. Established in 1996, the company markets its products under two popular labels: DreamCatcher Games, featuring the critically-acclaimed, bestselling game Painkiller; and The Adventure Company, the number one brand for PC adventure games worldwide, including award winning titles such as Syberia and Agatha Christie. DreamCatcher is located in . For more information visit www.dreamcatchergames.com.