Your fart attack is called the ‘Dragon Shout’

Me: “You can just hold [the button] and he farts forever?”

South Park: The Stick of Truth has been on my must-own list ever since the Xbox E3 press conference where Matt Stone and Trey Parker opened up by making fun of said conference. If they were going to make fun of Microsoft right on their own stage, then you just knew that the game wasn’t going to hold anything back.

The Stick of Truth focuses on players acquiring the all-powerful Stick, and the latest demo we saw during a Ubisoft pre-E3 show pitted us in the middle of a civil war at South Park elementary. The elves, lead by Stan and Kyle, are fighting against the humans, lead by Cartman, for control over the Stick. Players can pick which side they’ll fight for, and in this case the New Kid was on Cartman’s team.

Customization plays a huge part in the experience as you can pick between being male or female, and clothing, costumes, skills, abilities, weapons, and more can be changed to whatever you want as you progress through the game. Skills and abilities can be leveled up along with yourself, and stuff like costumes will give you different passive abilities that can be modified with patches. Weapons can also be modified with the different kinds of strap-ons you’ll come across.

The entire demo was set in the elementary, and you will have to navigate through the school to reach the Stick’s location. There’s an all-out war going on, with lots of obstacles that you’ll need to get through. A number of rooms for example have obstructions blocking your path; an easy challenge for the New Kid, renowned for his magical abilities. You can use your slingshot to shoot down lighting that will in turn knock out kids. Or you can shrink yourself down in size and make your way through ventilation shafts to get around blocked routes. An alien probe that bursts out of your ass can also teleport you up to specific hard-to-reach areas.

Your biggest magical ability is your farting skills. At any time, you can press and hold the appropriate button to fart into your cupped hands and toss out fart balls. Or you can just let out blasts of farts when the situation requires it. This particular attack is also called the “Dragon Shout” attack, and yes the New Kid is also called the Dragonborn. Yup, no shame. 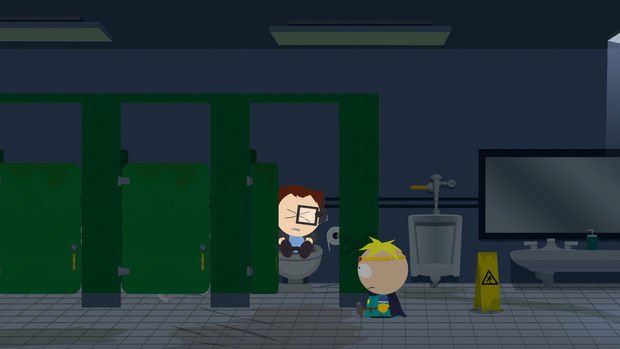 There’s quite a bit of adventuring going on, and lots to do in the world. Later we saw a girl getting ganged up on that you can save. Afterwards she’ll add you on Facebook (it’s straight up called Facebook in-game), and making more friends is key to your progress as it will get you powerful abilities, not to mention adding people to your party. Facebook is also where you’ll go to manage your party and customize your character. Oh, and at one point New Kid went into the boy’s bathroom, took a shit in the urinal, then grabbed his shit as it can be used as an attack in combat. Mmhmm.

Battles happen when you encounter an enemy, with the full transition to the battlefield and all. I’ve said it before, but I’ll say it again: The combat was very similar to titles like Super Mario RPG on the SNES (my favorite game of all time). Fights are turned-based, there’s timed attacks/defensive moves, you have a ton of different attacks ranging from physical, magical, and full-on summons.

Attacks are brutal once your remember these are kids fighting with real-world objects. Butters, who was the only person in my party during the demo, will straight up chuck a hammer at people’s heads. Then there’s the attack where you throw enough water at the enemy so there’s a puddle around them, pull out a car battery, and then toss in the other end of the cable clamps to shock the hell out of someone. Let me put it this way: this is the game where you can summon Mr. Slave and have him shove people up into his anus. If that doesn’t sell you on it then nothing will. 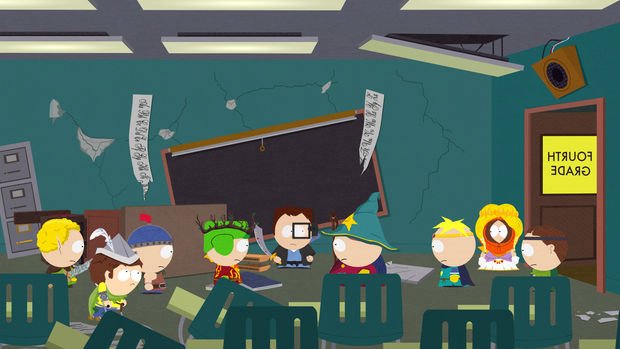 The final part of the demo has you enter the room with the Stick, where a showdown between Cartman and Kyle takes place. You’re given the option to pick a side again, and the player in this instance fights against Cartman.

The choices present different dialogue, but the final result here will be the same. The result being that everyone finds out that Clyde Donovan is in the possession of the Stick, and he’s declared war on both humans and elves with his Nazi-like army of the dead.

Matt and Trey stated that they’d only make a game where it felt like you are in an episode of South Park. The Stick of Truth is that and more. It’s like you’re playing a combination of the best/most-fucked-up episodes such as Passion of the Jew, Scott Tenorman Must Die, Go God Go XII, Good Times With Weapons, *insert your favorite episode here*. You can expect between 15 to 20 hours of good, deranged, and fucked up amounts of fun with this one for sure.