When the first screenshots for New Super Mario Bros. 2 were revealed last month, I had this crazy notion that Nintendo discovered a way to add DLC to NSMB on the DS. It wasn’t until I saw that big “2” that I realized it was a full-blown sequel.

A new Mario game — not some odd spinoff but a true Mario platformer — ought to be cause for celebration. Instead, I was deeply concerned that I had trouble distinguishing this sequel from its predecessor. Why should I be? Isn’t it typical for a new game in a series to look similar to the ones prior? Well, not when we’re talking about Mario.

For over 25 years, the mainline Mario series has remained so revered and influential because each new entry is a Madonna-like reinvention. The core gameplay remains the same, but there are so many tweaks that range from the subtle to the overt, not the least of which are the sweeping visual redesigns. Each game’s aesthetic is a unique signature, the mark of a self-contained adventure that feels familiar yet wholly unique, a testament on Nintendo’s behalf to never cut corners when it comes to its premier franchise.

However, if those New Super Mario Bros. 2 screens are anything to go by, Nintendo has gotten lazy. 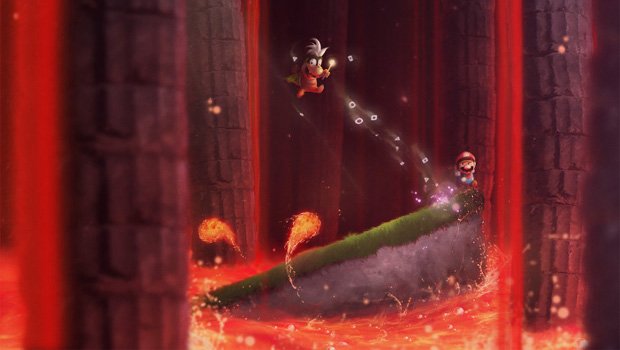 Three years ago, I wrote an article entitled “Inconstancy in the Mario universe,” in which I compared the various Mario platformers and analyzed the themes that I felt each best expressed. The environments have such a beautiful whimsy about them, and that essence trickles down and permeates every other aspect of the games.

The original Super Mario Bros. introduces us to the fantastic wonderland that is the Mushroom Kingdom. Super Mario Bros. 2 flips the script and sends us to Subcon, a dream world where all our preconceived notions are challenged. Super Mario Bros. 3, with its checkerboard and wavy line motif, is a stage production littered with props. Super Mario World takes us to Dinosaur Land, populated by tough reptilian baddies yet tempered by very colorful, geometric backgrounds.

The Game Boy games likewise stand out in their own way, as do the later 3D-roaming romps. Not even direct spin-offs like Wario Land and Yoshi’s Island are content to rehash. In terms of pure visual design, there is no consistent template. Each game features drastically altered sprites, worlds, music, enemies, and so forth, all while retaining that quintessential “Mario-ness.” Very few videogame franchises, especially ones that are over two decades old, have been able to embrace variety so effectively. 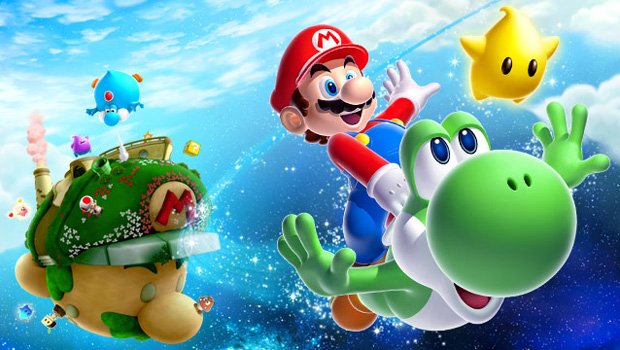 Not since The Lost Levels has there been a direct thematic Mario sequel — think along the lines of Final Fantasy X-2 or XIII-2. As amazing as the first Galaxy was, did we really need another one? I must admit, I was quite worried about how fresh Galaxy 2 would feel, considering that it was originally conceived as an expansion pack of sorts. My fears were allayed by the polish of the end product. Mario visited completely new planets, acquired imaginative new powers, and soared the stars to one of the greatest game soundtracks ever composed. This was no retread. Crisis averted.

But Galaxy 2 is a 3D game, and comparing 2D and 3D Marios is like comparing two completely different series. For the more classical sensibilities, New Super Mario Bros. Wii was also waiting in the pipeline. And just as Galaxy 2 gave me reason to pause, I wouldn’t blame anyone who saw the New Super Mario Bros. Wii reveal and thought it looked like a hi-res port of the DS game.

Remember how for months, many gamers, those who consider themselves on the pulse of the industry, honestly thought it was just a multiplayer version of NSMB? Is it really their fault for not paying close enough attention, or should Nintendo shoulder some of the blame for making a game that, at a casual glance, looks exactly like what folks thought it looked like? This was Mario’s grand side-scrolling return to a home console, yet it was hampered by its very deliberate association with an earlier handheld title. 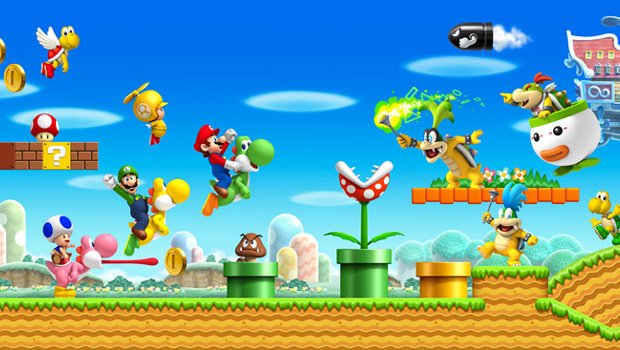 After playing through NSMB Wii, I was disappointed that, yes, the graphics are indeed higher-polygon, better-textured versions of the assets found in NSMB. There were no sweeping visual or thematic changes, as I’ve come to expect from a new Mario platformer. The worlds — Grass, Desert, Ice, Beach, Forest, Mountains, Sky, and Fire — are identical to those from the DS game and are even visited in nearly the same order. The backgrounds, colors, architecture, it’s all the same! Where are the bizarre locales, like Giant Land and Pipe Land from Super Mario Bros. 3, or Pumpkin Zone and Mario Zone from Super Mario Land 2? Where is the imagination?

Fast-forward to the present, is New Super Mario Bros. 2 the big update we’ve been waiting for? With a scant four screenshots to go by, the jury is still out until E3, but the present evidence doesn’t paint a rosy picture. I’m looking at the same Grass, Desert, Ice, and Forest environments from the last two games, only now Mario is rocking the Raccoon Tail, a reveal marred by the fact that it was already used as a hook for Super Mario 3D Land. Nintendo must have forgotten that it already played that trump card.

Three games in and this sub-series is failing to live up to the “New” in its moniker. I fondly recall the ever-more elaborate sprite work, rich colors, and inspired designs from one Mario to the next, yet modern Nintendo insists on sticking to a very safe, very clinical, 2.5D polygonal style that evokes none of the spirit of the old days. You don’t have to be a nostalgia junkie to notice the lack of effort. 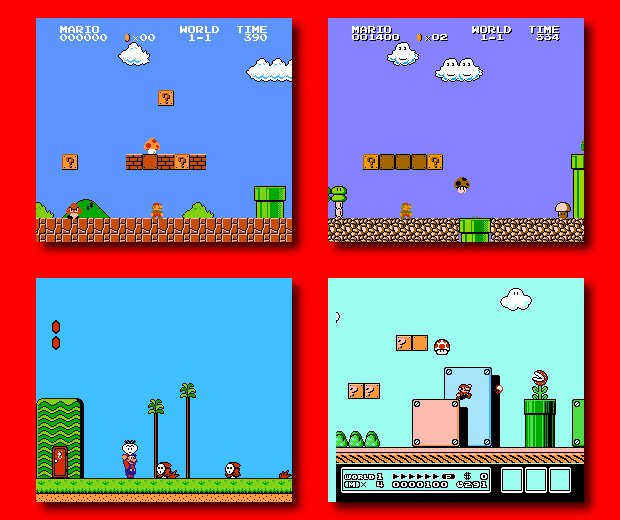 The above are the four NES-era Marios laid side by side. With the exception of The Lost Levels — it gets a pass for being the second Super Mario ever made — each is visually distinct from one another. In fact, if someone who had never played a Mario before looked at these screens, he or she would most likely infer that they are associated with different games.

The most remarkable thing about this comparison is the technical and artistic progression. The original may not be the most basic NES game in existence, but it ranks pretty low. In Japan, Super Mario Bros. 3 was released a mere three years later, yet the difference is staggering. It’s sometimes hard to believe they all ran on the same hardware. 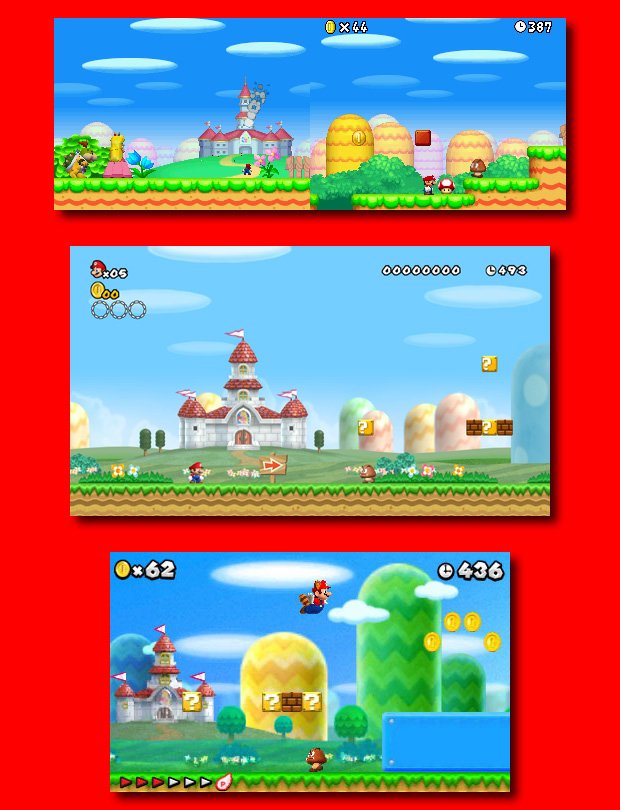 The above are the three “New” titles. Wouldn’t even a seasoned gamer have trouble telling the games apart from a quick glance? You’d have to know what to look for specifically, which requires a more careful observation. Oh sure, the original sports a much lower resolution, but the visual uniformity is readily apparent. And unlike the NES games, these all run on different hardware. You’d assume that Nintendo would feel some impetus to mitigate confusion.

There is one more “New” game I failed to mention: New Super Mario Bros. Mii. A remixed version of NSMB Wii with the ability to play as (duh!) Miis, it was among the Wii U “experiences” present at last year’s E3. How does it stack up visually? 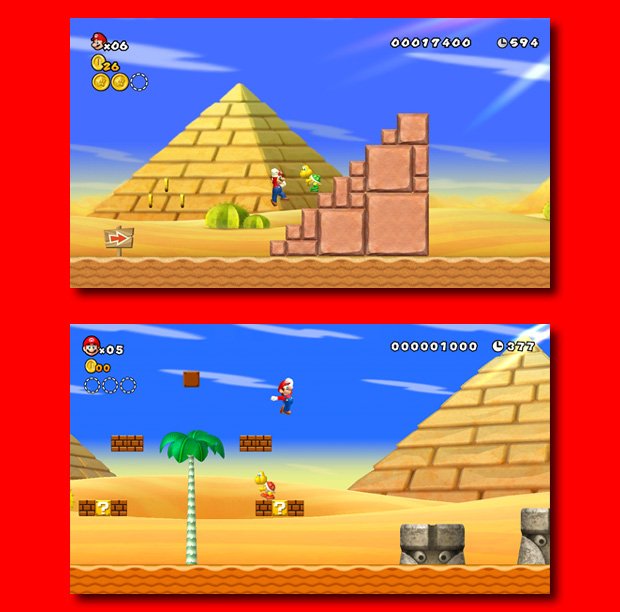 Take a guess! Which is Wii and which is Mii? Hard to tell without other Miis running around, huh?

To be fair, NSMB Mii wasn’t pitched as an actual Wii U title. However, there will be a Wii U Mario title, and it’s rumored to be based upon Mii. How different will it be? How much will remain the same? We won’t know until E3, but you’ll have to excuse me if I’m not brimming with confidence.

As much as I lament the visual conformity, I miss the attention to the finer details even more so. There are some elements you don’t notice until they are gone or altered, but once they are, you feel a slight disturbance. For example, you would be surprised at how something as simple as the end-of-level markers can have punctuate a game’s spirit and ideals. 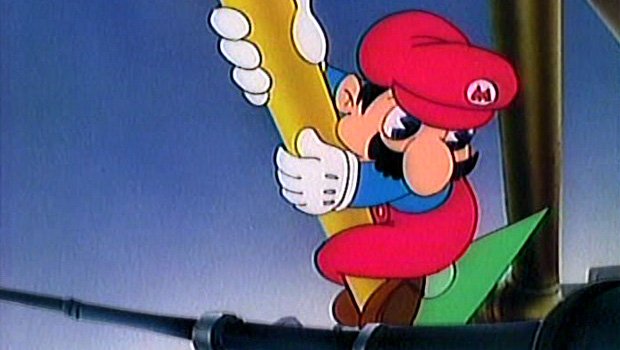 When it comes to Mario’s 2D adventures, Nintendo doesn’t want to push the envelope anymore. I do not deny that the newer games at their core still contain a few sparks of brilliance, but it’s almost as though the company is just running through the motions because it can score 20 million sales without a sweat.

This is a rant about visuals, but please spare me the “gameplay over graphics” rhetoric. I know, it’s odd to hear me say that. Nonetheless, when you are the leading name in a genre, the standard against which all others are measured, it’s all the more important to make a good first impression. It’s like how we’re told to “dress for success” when coming to work — if you don’t take care of your physical appearance, how can anyone be certain that you aren’t slacking in other areas? As I said in the beginning, it’s a trickle-down effect; it’ll eventually take its toll on other key areas, “gameplay” included.

In an age when 2D platformers are marginalized as cheaper, less-rewarding products, no one should be allowed to coast on past successes. You only have to see a game like Rayman Origins in motion to feel cheated that the venerable Mario is not being raised to that same standard. C’mon, Nintendo! Step up!