The NES library has north of 700 games on it. That’s a lot, but in terms of successful consoles, it’s kind of in the mid-range. It still makes it difficult to choose any number of the best games. That’s probably why no one has been brave enough to make a Top X NES games list. I’m not saying I’m the bravest person in the world, but I am saying I have no shame.

One thing to note is that while I’ve played a staggeringly wide range of the NES library, I haven’t played everything. For example, I haven’t played Bases Loaded 3, and I’m open to the possibility that it’s the apogee of the NES library. This also isn’t about which games were most popular or influential. That’s another topic. These ones are the best for a myriad of other reasons.

I’m also not including Famicom exclusives, though I’d love to. If I was, just know that Metal Max would be stomping all over these games. That and Kunio-Kun. But, alas, here are the top 10 NTSC NES games. This is going to be the top pick for a lot of people, and it’s here because I do love Super Mario Bros. 3; it just doesn’t get my thighs grinding. There’s a lot to love about it, though. For one thing, it plays like something that belongs to another console generation, effortlessly pulling off 4-way scrolling and fast movement. The level of variety on hand is insane, the level design is practically in a class of its own, and there’s a tonne of extras and secrets tucked away. Decades later, it still stands as one of the plumber’s best house calls. The fact that there’s such a night and day difference between Super Mario Bros. 3 and the first Super Mario Bros. while them both belonging to the same console is impressive. You can feel free to substitute your personal favorite Dragon Warrior (or Dragon Quest) game, but the original still feels the best to me. I prefer its simplicity and open design. Final Fantasy and the three subsequent games in the Dragon Warrior series take the formula in interesting directions, but if this list tells you anything, it’s that I value focus and polish over scale.

I love the twists Dragon Warrior throws at you, and I’m happy it can be completed in, like, ten hours. Its cheerful design makes it a bit more inviting than CRPGs at the time, and its simplicity makes it a great fit for consoles. Really, I love the complete NES run of Dragon Warrior games, but if I had to pick just one, it’s the original. In arcades, Contra was a merciless quarter-muncher. It was difficult to see even a fraction of it without giving up most of your allowance. In its home 8-bit form, it’s still extremely brutal, but at least it took all your money upfront. Contra on the NES is the seminal run-and-gun shooter, and it made a home for the series on console. It’s smooth, easily readable, varied, and nicely polished. Plus, its soundtrack is pretty kicking on top of it.

Contra would be followed up by Super C, which is fine but not quite as excellent as the first. This would lead to console-exclusive titles in the series, like Contra 3: The Alien Wars and Contra: Hard Corps. None of those are as good as Metal Slug, but we had to start somewhere. Batman: The Video Game has very little to do with Batman the 1989 movie. It has more to do with Ninja Gaiden and Castlevania, but you play as purple Batman and spend most of your time in sewers fighting robots.

The thing about Batman is that it’s like Ninja Gaiden if it was better designed. There’s wall jumping and gadget throwing, but it never resorts to simply spamming enemies at you and completely changing the rules just to screw you over. It’s one of the most difficult games I’ve completed, but I feel like I earned it. Learning to time those jumps in the clock tower, mastering everything on the utility belt, and somehow toppling Joker made for a satisfying conquest. The first Mega Man title sold in North America about as well as a box of live wasps. Thankfully, Capcom reluctantly green-lit a sequel, and even more thankfully, they tried it again over here. With an easier difficulty and uglier box art. Look, Mega Man 2 is already one of the breezier of the original 8-bit titles, but if you’re playing on “Normal” difficulty, it’s stripped of all challenge. The inappropriately named “difficult” is the way the Elder Gods intended, and I’m not just saying that as a flex. It’s actually equivalent to the Famicom version’s setup.

When you’re on the proper difficulty, Mega Man 2 has it all. Great soundtrack, solid level design, and memorable boss battles. A lot of people prefer Mega Man 3 to this title, but I think that’s bupkiss. Mega Man 3 is too long, and I find it has the visual flavor of wallpaper paste. Awesome opening song, though. I respect Punch-Out!! because I feel it’s a solid idea perfectly executed. Technically, it’s a port of a game that was released in arcades years earlier, but the mere fact that it was refocused to not just being a quarter-munching monster makes it a lot more enjoyable on console. As long as you’re on a setup without horrendous input lag, the visual cues and timing all make for a perfect challenge. Well, until you get into the top tier of boxers. I still can’t actually topple Mike Tyson, because when my attention span faces off against consistently getting my ass kicked, my attention span never makes it three rounds. 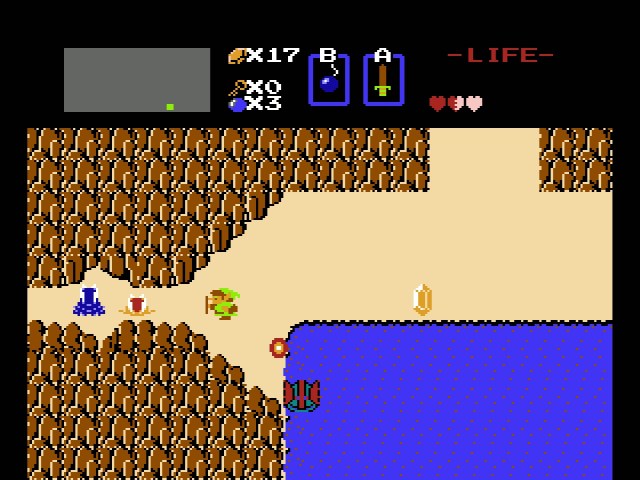 I often associate the original Legend of Zelda as the game that got me into gaming. I was extremely young at the time, but watching my father play through it gripped my mind. However, there are a lot of formative games from my youth that I rarely return to, and Legend of Zelda isn’t one of them. For whatever reason, I’ve developed a habit of returning to it almost annually for another playthrough.

Zelda had a massive impact on the direction of game development, but, as I’ve stated, this list isn’t about influence. Stripped of that, The Legend of Zelda is an open game that respects your abilities as an inquisitive human. Maybe a bit too much, but somehow I was able to figure out which bushes to burn, and that’s my mind isn’t letting that go. With the severe graphical memory limitations of the NES, beat-’em-ups were a tricky genre to pull off. However, we did get a few gems, including some of the most ubiquitous ports of the Double Dragon and Teenage Mutant Ninja Turtles games. Those are fine, but I think Technos’ weird experiment in the Kunio-Kun series stands as the best.

Upgrading your character through food and items, River City Ransom has as much to do with shopping as it does with fighting. When fists go up, it becomes a ridiculous brawl, taking full advantage of its expressive art style. It’s one of the few games I can name that allows you to use the second player as a weapon.

I would include more Nekketsu/Kunio-Kun games on this list if they weren’t Famicom exclusive. Check out the Double Dragon & Kunio-Kun: Retro Brawler Bundle if you’d like a taste of what we missed in the west. The NES had some great shoot-’em-ups in its library, though many of them were ports of arcade titles, and many more didn’t even make the journey to our front-loaders. Gun*Nac is a major exception, and it’s easily the best on the console.

Featuring amazingly fast scrolling and near-flicker-free graphics, it’s a technical masterpiece. To add to that is an unending variety of enemies and a slew of weapons and bombs to clear the screen. Gun*Nac is unbelievably robust, especially considering its 8-bit trappings. If you haven’t tried it or even heard of it, you’re missing out. There’s no question in my mind that Castlevania is the best game on the NES. From both an aesthetic and design standpoint, it’s flawless. Featuring tightly refined controls, perfect enemy placement and behavior, a stiff but fair challenge, and a surprising amount of variety, I still consider it to be the best in the series and on the system. Considering the Castlevania series already has enough banger titles to fill its own highly subjective top 10 list, I think that says it all.

Don’t think this is an off-the-cuff decision, either. When my NES library explorations finally reached Castlevania, I knew I had reached the peak. Now that I’ve dug even further, I’m even more certain of it. Castlevania is what 8-bit perfection looks like.