River City Ransom was an important game in the development of my retro appreciation. My early attempts at familiarizing myself with the NES included such titles as Kid Icarus, Friday the 13th, and — I swear this is true — Total Recall. It left me with the impression that I just didn’t like NES-era video games. River City Ransom and Punch-Out!! corrected that perspective and led me down the path of having difficulty conversing with normal people.

It would also lead me to explore the Kunio-Kun series. See, in Japan, River City Ransom was part of this staggeringly large series of games that had the absolute most inconsistent and complicated naming scheme imaginable. Alternating between Kunio-Kun, Nekketsu, Downtown, and even Dodgeball Club, their monikers were typically long and all over the place, but the titles were unified with a cartoonish appreciation for violence and a memorably weird art style.

We got a few over here in the West, such as Super Dodge Ball and Crash ‘N’ the Boys, but the majority stayed in their home country. The unfortunate truth is that the best games in the series never landed on the NES. Let us introduce you to one of them. 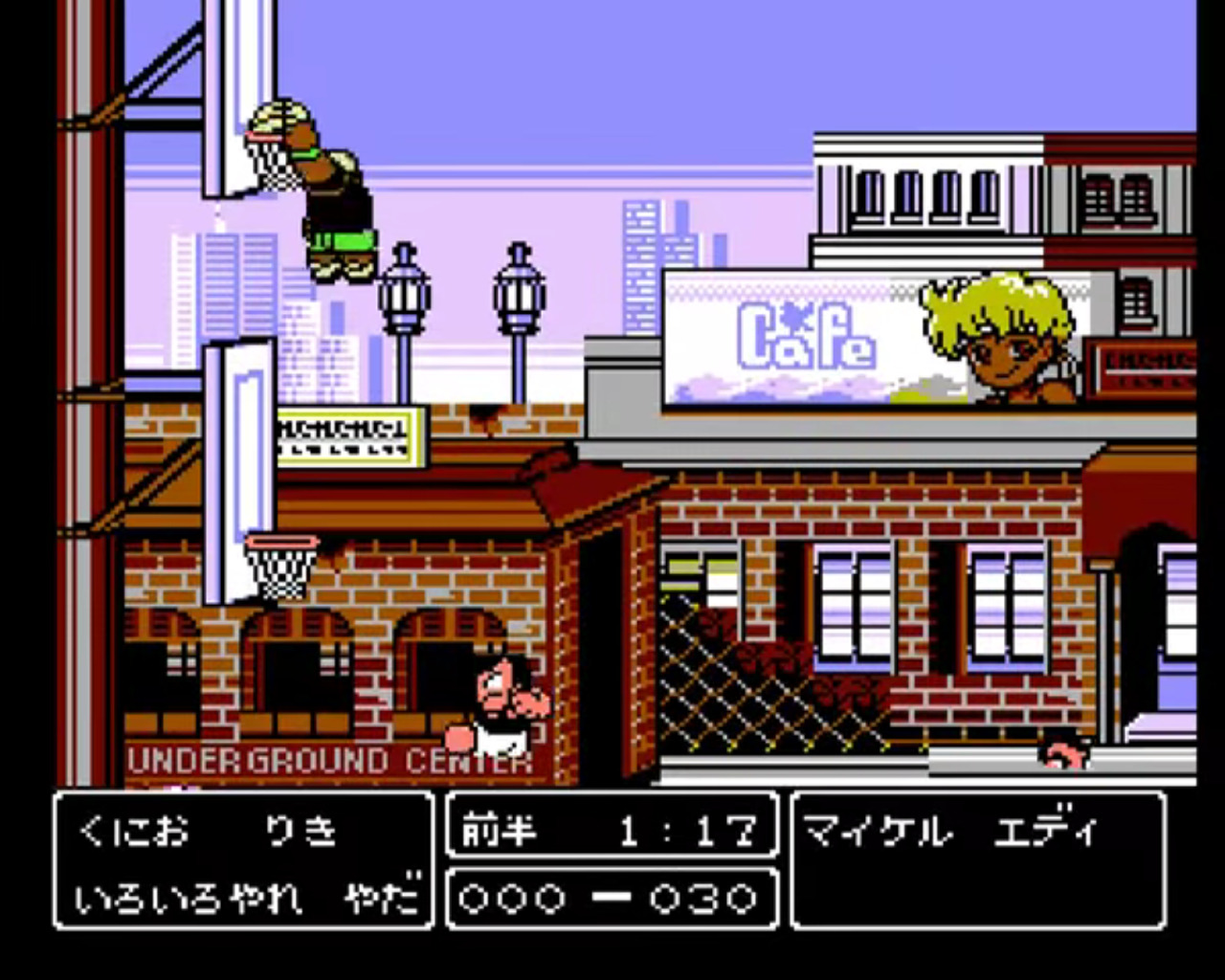 Kunio-Kun is no stranger to sports, with a good portion of the series invested in weird titles devoted to dodge ball, soccer, and track and field. Being Japanese, however, I certainly didn’t expect a hockey title, and further than that, I can’t believe there’s a basketball one. Nekketsu Street Basket: Ganbare Dunk Heroes is just the type of basketball game you’d expect to come from a Japanese developer; one that takes, ahem, liberties with the sport.

The story sees Kunio winning a trip to America on some sort of quiz show. His friends Riki and Godai decide to stowaway and join him. Suddenly basketball. Apparently, there’s some sort of street basket tournament going on and Riki is hellbent on winning it. I actually had to watch the opening cutscene again to see if I missed something. Nope. Go to America. Win basketball. 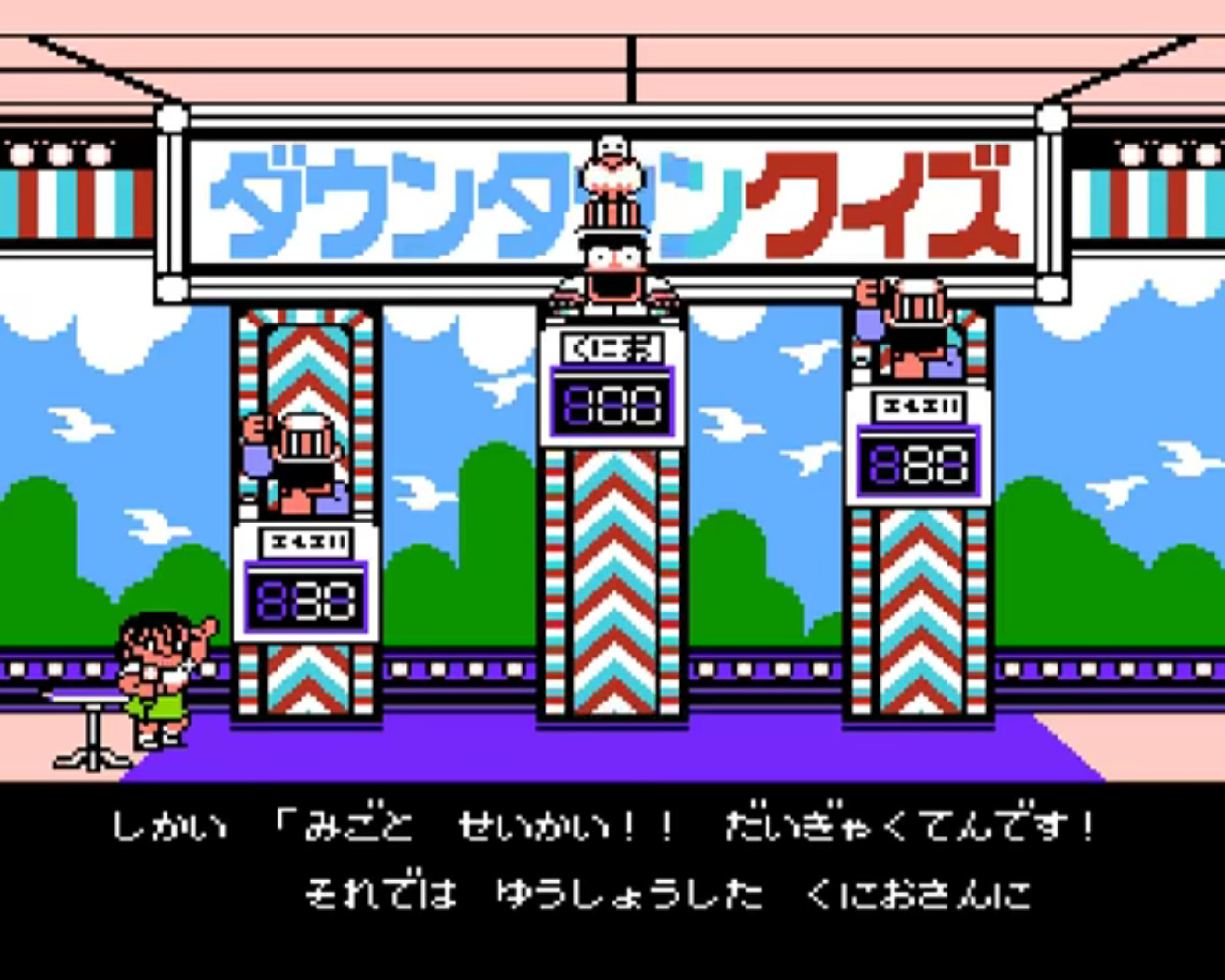 Street basket is a two-on-two twist on the sport, which makes sense since Nekketsu would frequently push the system’s multi-tap peripheral. However, it only gets weirder from there. Instead of points being based on where the shot was made from, here we have three nets stacked on top of each other towering into the sky. Slam a wicked dunk in the top net and there’s a chance it will drain through the two beneath it, giving you an accumulation of points.

But wait, it gets weirder.

The nets are apparently just velcroed on, so they fall off with some regularity. If one of your nets falls off, you can actually pick it up, carry it to your opponent’s side, and stick it to one of their backboards, allowing you to gain more points from a successful drain.

Of course, this is a Nekketsu game, which means a joyful approach to violence. There are no penalties, and you’re allowed to throw punches and garbage cans at the competition as much as you want and they’ll do the same. You can also do things like skateboard, walk on the background scenery, and set up ladders. You can dunk higher by jumping on car trunks or getting kicked by a horse. It gets chaotic, to say the least, but it wouldn’t be Nekketsu/Kunio-Kun/Downtown/Dodgeball-Club if it didn’t. 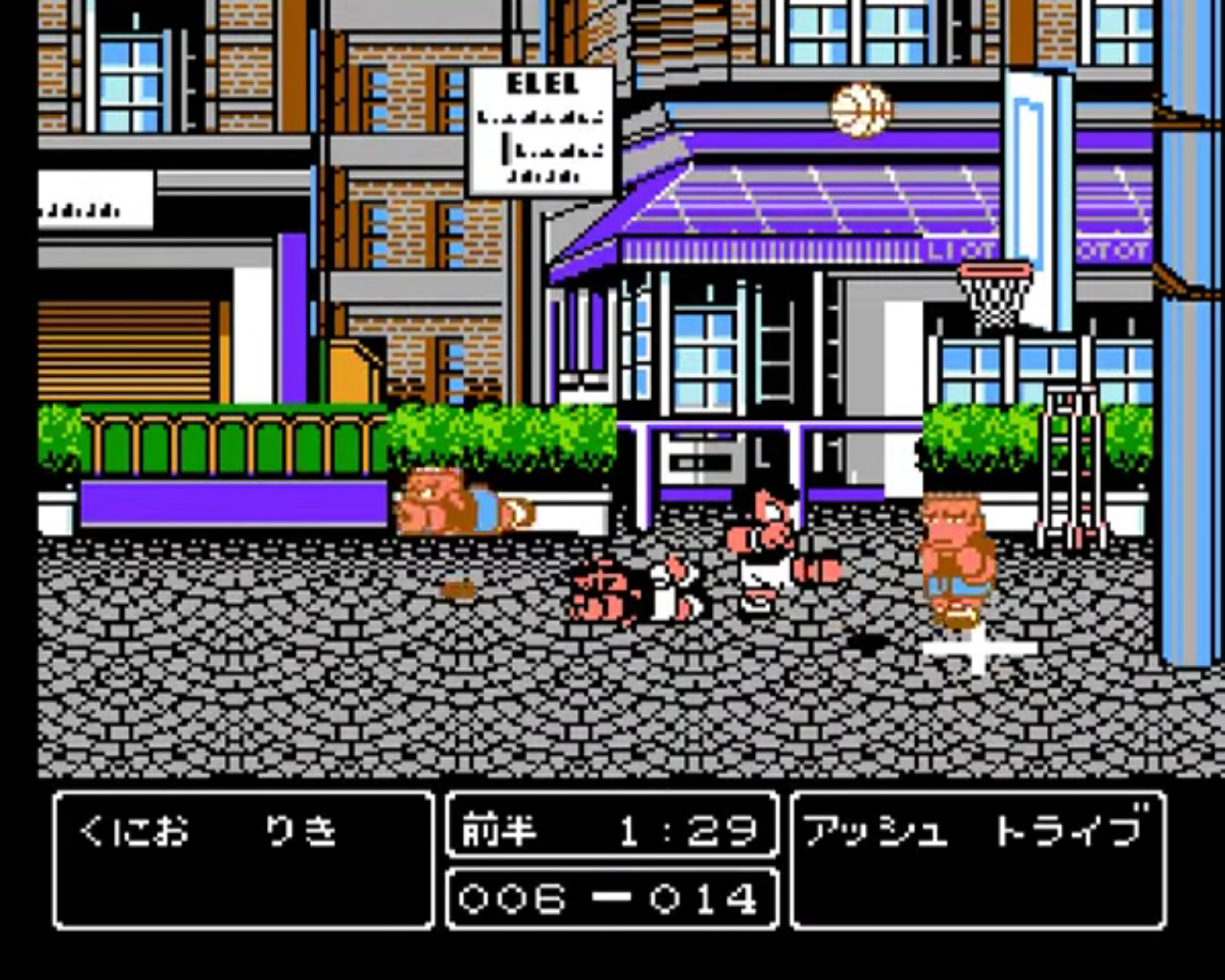 If you don’t already think this game is awesome, it also has some of the best co-op in the series. Most of the Nekketsu sports games feature co-op, but too many of them force Player 2 into the net where they goaltend and sulk while Player 1 has all the fun. Ganbare Dunk Heroes puts both players on the same level and lets them go nuts.

It’s perfect for mismatched pairs. Got a little brother who can’t make the power throws? He can just go around keeping the other team well punched while your skills pay the bills. I even played through the story with my father, who, while he’s no slouch, isn’t as well versed in retro games.

As you beat the seven teams in the main story mode, they’ll provide you with gifts of shoes and other knick-knacks that power up your players. These seem to be given randomly, so it is entirely possible that you’ll get something that ups your accuracy to the moon after the first team. Others, I don’t even know what they do. One of them seemed to randomize my power shots, but I couldn’t tell you what piece of my outfit did it. I guess the randomization of equipment makes every playthrough a bit different. Balance was never really the series’ strong suit, anyway, and this game does nothing to change that. 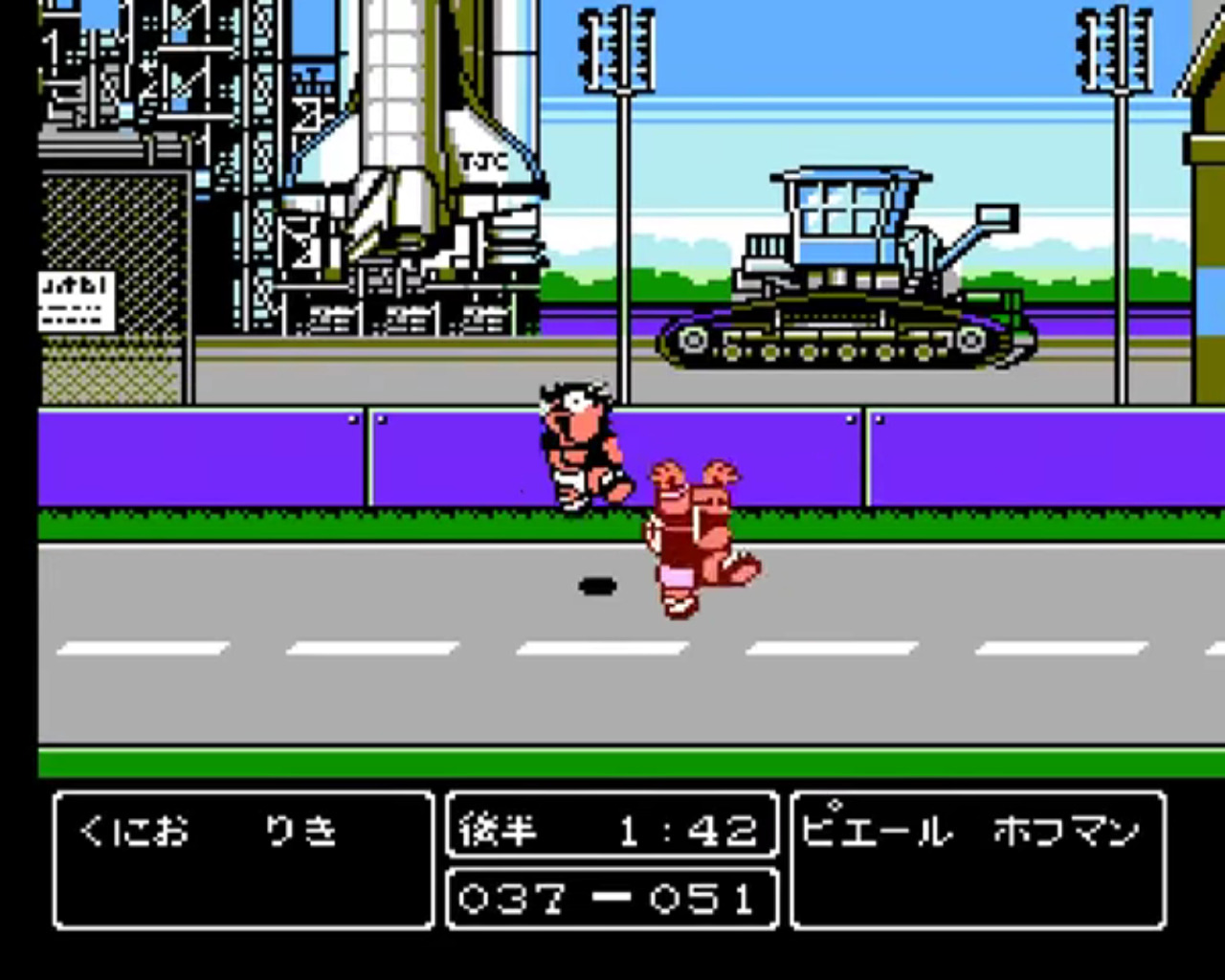 There are other minor weaknesses. For example, the Florida team is a bunch of cheaters. They teleport everywhere, including directly in front of your hard-earned shot, and it can seem like a ridiculous advantage. You also have to beat every team twice, once on their court and once on your own (which is apparently Niagara Falls, for some reason). Even with that obvious padding, the game is noticeably short and not very difficult, with no options to increase it or incentive to play it again. It lives on better as a multi-player game since you can’t really find basketball this ridiculous anywhere else.

There’s also a lot of sprite flicker, but if you’re an established fan of the series, you’ll already know that’s essentially a hallmark of Nekketsu. Honestly, it’s not as bad as, say, Super Dodge Ball, where the ball can disappear entirely when you’re trying to catch it. It was released in late 1993, so Technos had a lot of practice with the hardware by this point. 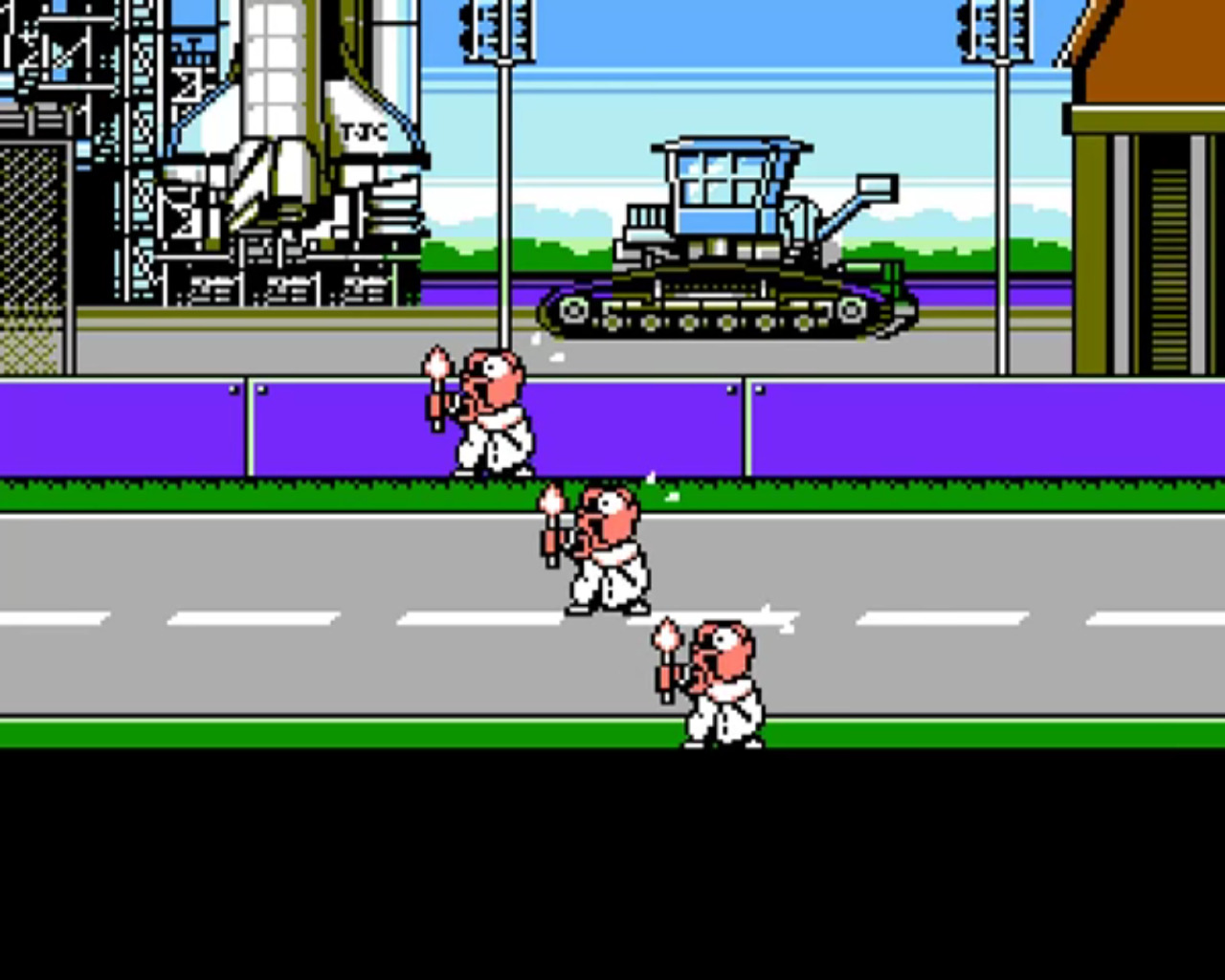 It’s not all bad news with Famicom Friday since Kunio-Kun’s new owners, Arc System Works, finally localized Nekketsu Street Basket: Ganbare Dunk Heroes in the West as part of the Double Dragon & Kunio-Kun: Retro Brawler Bundle. They went the extra mile and fully translated the game, giving it the new moniker Nekketsu! Street Basketball: All-Out Dunk Heroes. Some of the Nekketsu titles are available piecemeal, but not this one for some reason. Doesn’t matter. If you want a recommendation, the collection is definitely worth it. It also adds online play, so fight me!

Otherwise, it can be found on the Famicom for a pretty hefty price. It was later ported to the Game Boy Advance as part of the Kunio-Kun Nekketsu Collection 1. As for my precious localized bundle; that can be found on Switch, Xbox One, and Playstation 4. Hold on, I should end this with a basketball reference. Um, how about: It’s game time! Get your Hanes on, lace up your Nikes, grab your Wheaties and your Gatorade, and we’ll pick up a Big Mac on the way to the ballpark. Oh. No, wait…