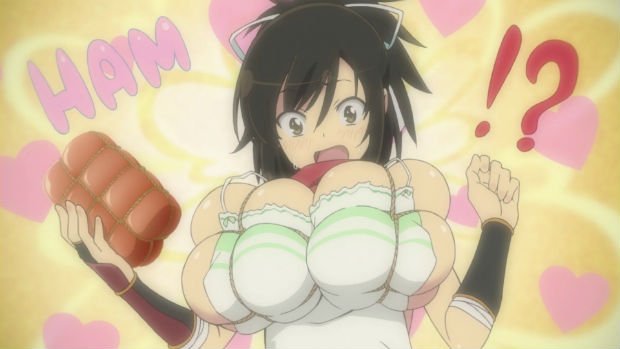 Can corn puff snacks be risque?

Senran Kagura 2: Deep Crimson has featured collaborations recently with restaurant items based off the many Pair Battle characters seen in-game, and now more have sprang up. Just like a certain something else that you guys like to talk about when I mention these games.

Umaibo (“delicious stick” in Japanese) is a brand of corn snacks that have collaborated with anime hits Monogatari and Puella Magi Modoka Magica in the past, and now Senran Kagura 2 is getting in on the action. Joke about delicious sticks and getting in on said action here. Springing up. Genitalia. Go ahead, get it out of your system. Thanks to 4Gamer for bringing this up.

So yeah, these are corn puff snacks, and they’re promoting Senran Kagura 2: Deep Crimson. You could stick them between your breasts, I suppose, like in the picture but you’re going to need a solid C-cup to do it well. Probably going to want to just go ahead and eat them instead. Oh, and pick up Senran Kagura 2 when it eventually releases. I’m more interested in Senran Kagura: Bon Appétit though, I think.