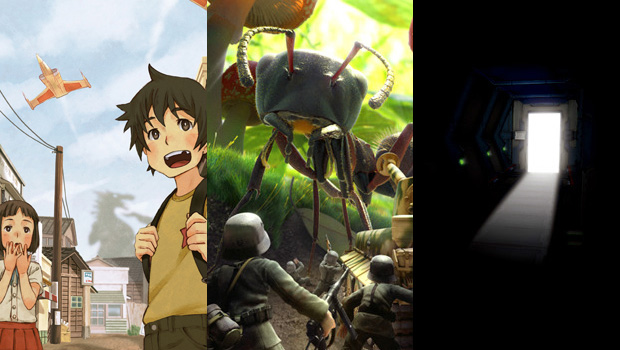 Will be broken apart as eShop releases throughout March

Three of the four titles from Level-5’s 3DS game jam Guild01 made it to the eShop out West. Liberation Maiden, Aero Porter, and Crimson Shroud were all bizarre but solid experiences, and I’m extremely grateful that they were given a chance on our shores. I hope the same arrangement is made for the the games of Guild02, due next month.

Though the original received a retail release in Japan, Level-5 is going to take the Western route and break Guild02‘s mini-games apart into eShop downloads. And instead of four games, there are only three: Uchuusen Damurei-go (“Spaceship Damurei”), Mushikera Sensha (“Insect Tank”), and Kaiju ga Deru Kinyoubi (“Monsters Come Out on Friday”).

Spaceship Damurei is suspense adventure by Kazuya Asano and Takemaru Abiko. Suffering amnesia, you wander a spaceship seeking an escape, but you, the player, are as much in the dark as your avatar, given no instructions on what to do or where to go. Insect Tank is a survival action game by Keiji Inafune in which you customize a super tiny tank to battle swarms of insects. But the most interesting game of the lot is Kazu Ayabe’s Monsters Come Out on Friday, a heartwarming tale of a boy who happens to live in a town where giant Toho-like beasts fight on a regular basis.