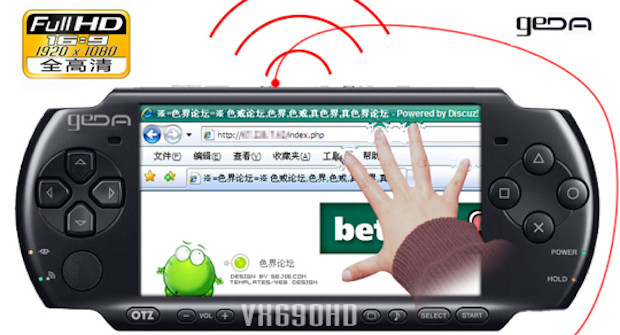 Ladies and gentlemen, let us introduce the Geda VX690HD, perhaps the most blatantly obvious rip-off in the world. You almost have to congratulate Geda for summoning the kind of stones required to release a system that doesn’t even try and look different from the PSP. In fact, I will congratulate them: Well done, Geda, you shameless, shameless bastards.

The VX690HD supports HD and Blu-ray resolutions for MP4 playback, and you can also play GBA, NES, SNES and NeoGeo games on it. It also looks exactly like a bloody PSP! The thing even manages to be wireless enabled, making it one of the higher quality knock-offs we’ve seen for a while. That said, it could also be made out of paper and sticks, so we don’t know exactly how well all this stuff works.

Make sure you check out the gallery for an amusingly terrible advert for the traversty. I’ll be sure to pre-order mine today!