How did you do?

Last weekend, in celebration of the newest Legend of Zelda game, I posted a quiz about the series’ history, with questions spanning the entire 30 year history of the franchise. Today, the results. This quiz was intentionally more difficult than the last one I did, so let’s see who got the best score. I’m sharpening up my red teacher’s pen, and…

There’s an awful lot of red ink getting all over everything. Probably shouldn’t put pens in the pencil sharpener. Whoops. Oh well, let’s get to it.

1.) The original Legend of Zelda had some design elements that didn’t exactly match up with Nintendo’s code of conduct in 1988. Which of these was against their code at the time?

a.) Link sets other characters on fire using the candle and magic rod
b.) Christian iconography on Link’s shield promotes one religion over others
c.) The fairies in the fountains are actually naked (though the sprites are too small to tell)
d.) “Magic Potion” resembles cough syrup and could be seen as encouraging drug use 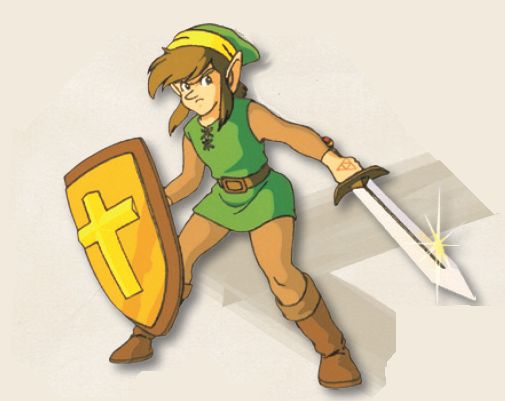 Answer: B. Nintendo’s code of conduct forbade “symbols that are related to any type of racial, religious, nationalistic, or ethnic group, such as crosses, pentagrams, God, Gods (Roman mythological gods are acceptable), Satan, hell, Buddha.” This policy didn’t go into effect until 1988, which is why the original Link sprite and official artwork showed him with a cross on his shield. This remained in Zelda II, but the shield was held at an angle the player couldn’t see. Later games removed the cross, replacing it with other symbols like the Triforce.

2.) Zelda II: The Adventure of Link was famously delayed for what reason?

Answer: C. The infamous “chip shortage” was something we heard about on playgrounds and in Nintendo Power, and was the semi-official reason it was hard to find a copy of Zelda II after its release.

3.) The Legend of Zelda was a hugely influential game, and homages began showing up not long after its release. Which of these had a reference to Zelda? 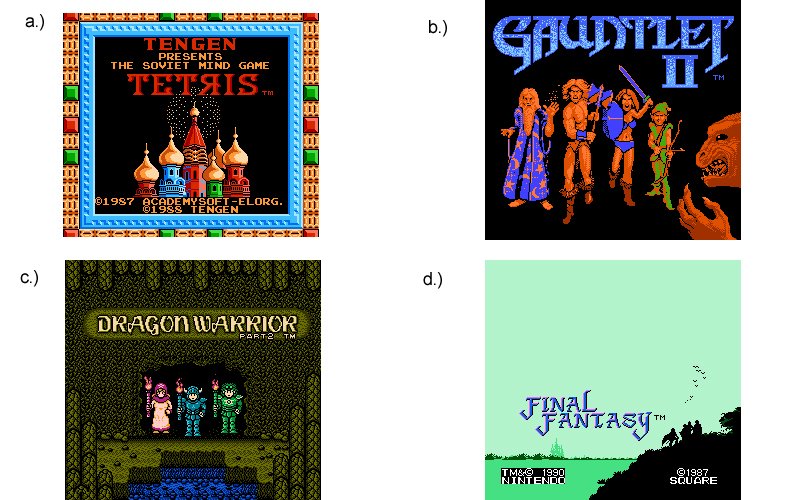 Answer: D. Final Fantasy contained a tombstone in Elfheim that the player could walk up to and read, and in the Japanese version the grave marker reads “Here lies Link.” The U.S. NES version was localized to read “Here lies Erdrick,” the hero of legend in the first Dragon Quest game. Later remakes of Final Fantasy have changed the name on the tombstone in the English localization, and it’s more common to see the name written as Link than Erdrick now.

For those who think the answer should be A, it’s true that the Nintendo version of Tetris did have a celebration screen that featured several famous Nintendo characters playing instruments, and Link appears in the lower right playing a flute. However, the title screen above is specifically for the Tengen version of Tetris, which didn’t have this feature.

4.) Speaking of references in other games, several items from The Legend of Zelda have made their way into Super Smash Brothers. Which of these has NOT made an appearance in Smash?

Answer: A. The Bunny hood debuted in Melee, and it doubles the movement speed of whoever picks it up. The Deku Nut first showed up in Brawl, and it briefly stuns anyone you throw it at. The Fairy Bottle made its first appearance in Smash Brothers for Wii U and 3DS, and will heal 100% damage, provided the player who picks it up is already badly hurt. It sort of gives you an extra life, so it’s a good analogue for how the fairies work in Legend of Zelda games. There is a Fire Bar item that you swing as a melee weapon, but it comes from the Mario series and resembles the spinning traps found in castle levels.

5.) The Zelda series is one of Nintendo’s most prolific. Not counting re-releases, how many games set in The Legend of Zelda‘s universe have been released in the United States by Nintendo or their partners?

Answer: D. I know some people are going to get mad about this one, so let’s break it down. There have been 16 first party Nintendo-produced Legend of Zelda games, and if you really want a list of each I’ll write them out in the comments. The question also asked about Nintendo’s partners, however. Capcom helped create three Zelda games on Nintendo’s portable hardware, both Oracle of Ages and Oracle of Seasons, and later The Minish Cap. That brings us to 19. It’s a dark chapter in Nintendo history, but they did allow Philips to create three games based on The Legend of Zelda for the doomed CD-i system. That brings us to 22. More recently, Koei Tecmo borrowed Zelda‘s trappings for the musou title Hyrule Warriors, and that brings us to 23.

Keep in mind the question specifically avoided remakes and re-releases, so the 3DS versions of Ocarina of Time, Majora’s Mask and Hyrule Warriors don’t count as separate entries, and neither do the Wii U releases of Twilight Princess or Wind Waker HD.

6.) List these games by how many heart containers are available, from least to most.

Answer: C, B, A, D. Depending on your point of view, you could say that Zelda II doesn’t have ANY heart containers since Link’s life is represented by a red health bar. Even if you count the bars as hearts though, Link can still only have a maximum of 8. Next least is Link’s Awakening with 14, then The Legend of Zelda with 16, and finally A Link to the Past with 20.

7-12.) Ocarina of Time‘s success meant that most games that followed contained a playable musical instrument of some sort. Put these in order of when they first appeared in a Zelda title.

Answers: D, E, A, C, B, free point (I am Error). I messed up the numbering, so everyone gets number 12 as a free point. The Flute (or warp whistle) appeared in the very first Zelda game in 1987. The Ocarina didn’t show up until Ocarina of Time in 1998. The Drums were the instrument Link played as the Goron champion in 2000’s Majora’s Mask. The Harp allowed Link to travel between time periods in 2001’s Oracle of Ages, and the Pan Pipes had to be blown into on the DS for 2009’s Spirit Tracks.

13.) Although Rupees are usually the currency in a Zelda game, sometimes Link collects something else instead. Which of these titles didn’t have a single Rupee in it? 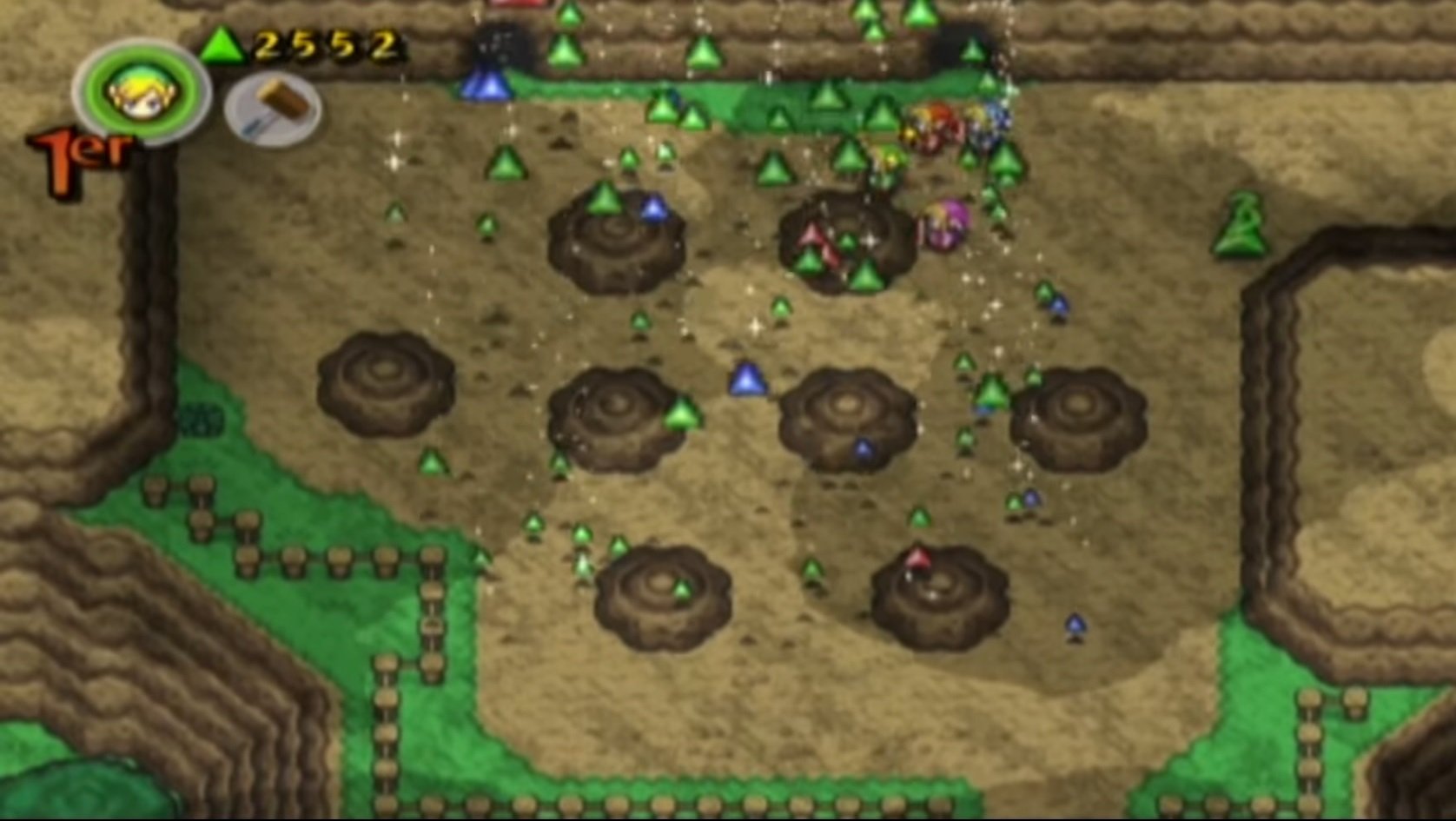 Answer: B. Instead of Rupees, the four Links compete to collect “Force Gems” which are functionally almost identical to Rupees. They’re triangular in shape and the Links power up when they collect enough, but the color scheme and values are the same as Rupees.

14.) If you fail in Zelda II: The Adventure of Link, you’ll see a silhouette of Ganon and hear his evil laughter. In which other NES game might you have heard this same sound effect? 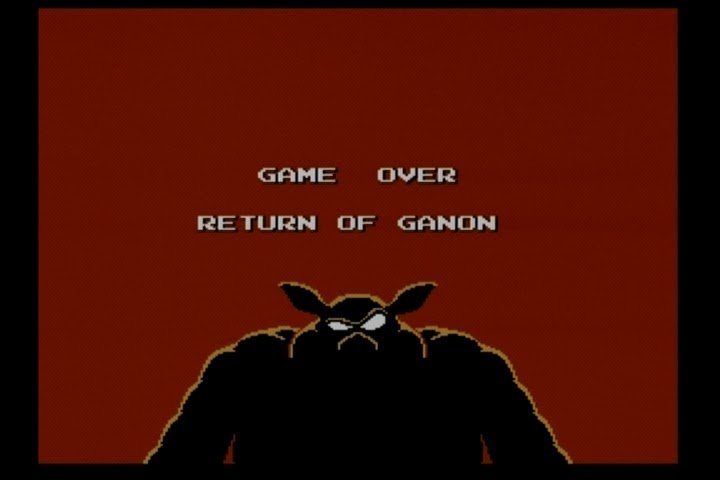 Answer: D. If you’re knocked down by Soda Popinski, he unleashes the same mocking laughter as Ganon resurrected. Maybe that’s why he’s so tough to fight past. Head games.

15.) The Legend of Zelda: Oracle of Ages and Oracle of Seasons could be linked together to unlock some additional content. Which of these was NOT available in a linked game?

a.) Special rings could be passed between the games and equipped
b.) A third quest opened up called “The Mystical Seed of Courage”
c.) A secret boss fight could be accessed after beating both games normally
d.) You could start the game with four hearts instead of three

Answer: B. All of the other features could be unlocked by entering passcodes between the two games, but “The Mystical Seed of Courage” was a planned third title for the Game Boy Color that never saw release. Originally, three games were supposed to represent the three triforces of Wisdom, Power, and Courage, but for budget and logistics reasons, the planned trilogy had to be reduced to a duology. They’re both very good though, well worth downloading through the eShop if you have a 3DS.

16.) True or False: The original Legend of Zelda is so open-ended that you can beat the game without ever picking up a sword.

Answer: False. While you can make it all the way to Ganon without a sword if you’re very skilled (or have a Game Genie) there’s no way to defeat him and beat the game. Since you must hit him with a sword to set Ganon up for the silver arrow that will finish him, you can’t win without one.

17.) The original Legend of Zelda came with a map of the overworld packed into the box, but some of it wasn’t filled in. How many screens were missing on that map?

Answer: D. You can count `em below if you like. (Map scan courtesy of Skociomatic.)

18.) How many notes play when you meet a Korok in The Legend of Zelda: Breath of the Wild?

Answer: C. One of the first stories I wrote on Destructoid was about the leaf-masked Koroks, and I’ve been enjoying collecting the little dudes like Pokémon in Breath of the Wild. Each time I do, I hear the seven-note jingle that lets me know I solved the puzzle.

19.) Which of these towns from Zelda II: The Adventure of Link is NOT the name of one of the Sages from Ocarina of Time?

Answer: A. Rauru is the Sage of Light, Nabooru the Sage of Spirit, and Ruto the Sage of Water. Mido makes an appearance as Link’s rival in the Kokiri village, but Saria is the one who awakens as the Sage of Forest.

20-23.) Zelda games often have a special bonus if you buy the first edition. Match these bonuses to the title they came with. 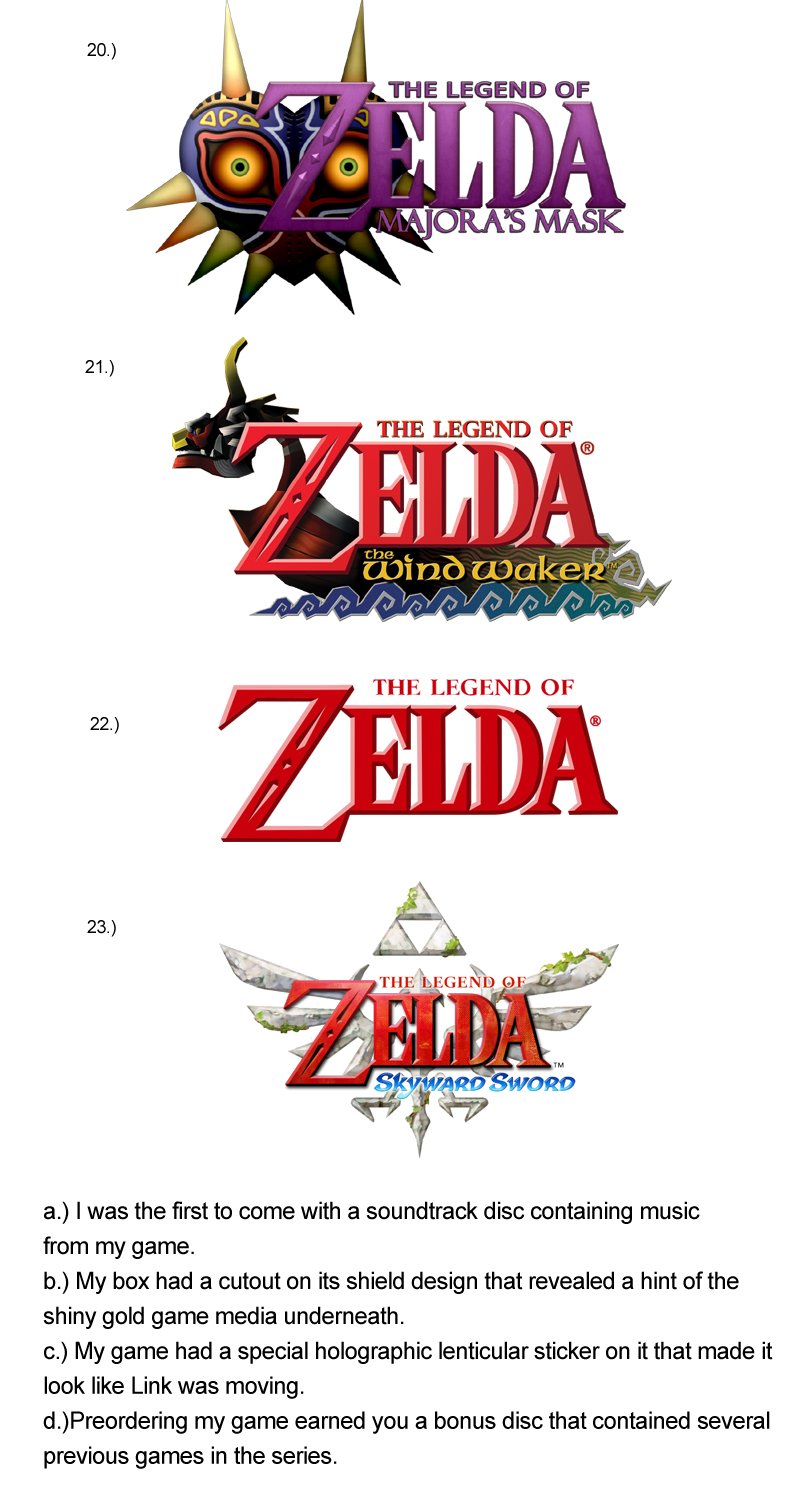 24.) Which of these items can be purchased in A Link to the Past?

Answer: C. You can’t buy any of the others, but potions can be purchased once you give the mushroom to the witch.

25.) Vaati replaced Ganon as the main villain of the Four Swords games. With what element is Vaati associated?

Answer: B. While Chist had my favorite comment, the missing element isn’t heart, and fortunately Vaati isn’t like Don Cheadle’s Captain Planet.

So how’d you do? No perfect scores this time, but Iam16bit came closest with 23! Congratulations to our winner, who gets a Gold Retroid badge and a copy of Drive! Drive! Drive! for the PS4. They’ve been contacted via direct message. To everyone else, thanks for playing and better luck next time. If you need all the legal mumbo-jumbo, you can read that on the original quiz page.