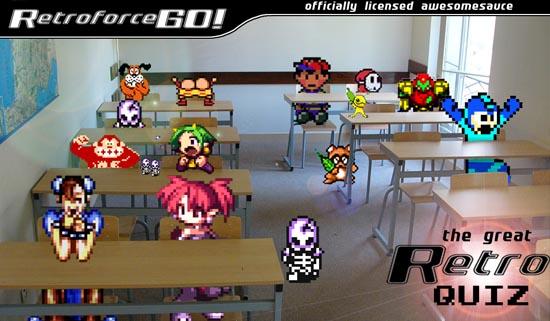 This is it, folks: the season finale of The Great Retro Quiz! Don’t fret, though; it will be back for an even better “Season 2” after a short break. I just need to tweak a few things — maybe hire twenty-five beautiful women to hold some metal cases — and, I don’t know, install a Plinko board or something. Yeah, the Great Retro Quiz! definitely needs a Plinko board.
In the meantime, start studying up on things like Final Fantasy VI, Super Mario Bros. 3, and Super Metroid. These games may be making an appearance come next season (hint hint).
To celebrate the grand finale and the strangely coincidental release of Mario Kart Wii, this week’s quiz is all the original Super Mario Kart for the Super Nintendo Entertainment System. How well do you remember it?
Just leave your answers in your comments and check my community blog tomorrow (5/1) for the dramatic results.
Start your mental engines and … good luck! The Great Retro Quiz! misses you already!
The Great Retro Quiz! .30

4. How many total tracks are in Super Mario Kart?

d. Koopa Beach 3
6. Which classic character from the Mario universe rescues racers who have fallen off the track?

7. True or false: Donkey Kong is a playable character in Super Mario Kart.

a. True
b. False
Pair up the characters that share the same driving class:

12. Mario just picked up a coin. What happened?

a. He can now drive faster
b. He can now jump higher
c. He can now pick up better items
d. He can now turn tighter
13. What is the name of the famous final track that is featured in every single version of Mario Kart?

Which Super Mario Kart items will help the below poor souls solve their problems?

14. Marty the model is too tall for the job he wants to book. He needs to shrink down …

15. Ginny the gymnast can’t seem to jump high enough to clear the vault. She needs to jump higher …

16. Sal the submarine pilot is having trouble hitting his target. He needs to attach something to the torpedoes …

17. Theo the thief keeps getting busted when he tries to mug a passerby. If only he could steal something without being detected …

18. An intense race just ended, with all the racers finishing in the below order (the leftmost driver being last). Who just avoided being eliminated from the next round?

a. Bowser
b. Koopa Troopa
c. Luigi
d. Yoshi
19. How many points does a racer receive for coming in first during a Grand Prix race?