After an unfortunate one-week hiatus, The Great Retro Quiz! is back, although a little bit worn out from all the traveling and unhealthy amounts of eating. Even though it may look a little heavier, let’s all be extra sweet and tell our little friend that eating four leftover turkey sandwiches late on a Saturday night is actually helpful in keeping the weight off. I … er … it appreciates the positive reinforcement.

Since next month marks the 20th anniversary of everyone’s favorite “Pew! Pew! Pew!” hero, this week’s quiz is all about the original Mega Man games (specifically 1-8). I am assuming you all played (and adored!) these games growing up, but do you really remember them as well as you think you do? Does the name “Guts Man” ring a bell or leave you scratching your head in confusion?

Like every week, just leave your answers in the comments and whoever gets the most right will win (in the event of a tie, Dr. Light will invent and build a robot to randomly select a winner)! For the victor, this week’s prize is a seriously cool (and big!) action figure of the Blue Bomber himself. You can check my community blog tomorrow for all the correct answers and the nail biting results.

Charge up that mental arm cannon and … good luck!

1. Who designed the character of Mega Man?

What Robot Master is missing from the below classic Mega Man selection screens? 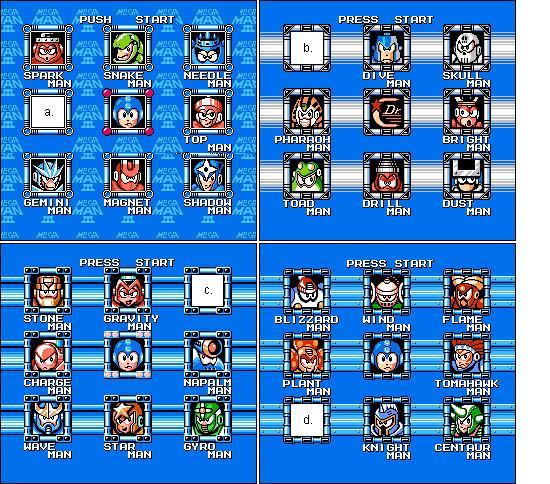 6. If all the videogames of the world were forced to make the same specific name change that the original Mega Man did when moving from Japan to America, which of the below would be the new title of a currently available Xbox 360 game?

7. What color hair does Mega Man have?

8. Box art memories! Which Robot Master is featured on the cover of Mega Man 4?

9. Mega Man reluctantly takes his sister to the annual Robot Master reunion (he knows how Quick Man gets when he’s drunk). Which of the below nametags would his little sibling sport as she walked in the hotel ballroom?

What does it recharge?

12. In Mega Man 3, which of the following can Mega Man’s robot companion Rush not turn into?

14. Dr. Wily played way too many videogames when he was little. When late for dinner, what full name would his angry mother yell to force him to come downstairs?

Virtual personal ads! Match the below Robot Master with its most popular likes/dislikes:

20. Ridiculously hard question of the week! How many blue windows are shown on the side of the building during the famous opening sequence of Mega Man 2?