[Editor’s note: Following Destructoid’s coverage of some questionable dialogue found in the Japanese version of Fire Emblem Fates, community member Ckarasu has delved deeper into the translation and offers his own take on the situation.]

Fair warning, there may or may not be spoilers lurking in this discussion.

It’s no secret that there’s currently a controversy surrounding Fire Emblem Fates, and the support dialogue of Soleil and the main character. Many are making allegations of date rape and gay conversion, without looking into the context of the support conversations or even the overall game itself. Wild claims of homophobia are being tossed at Intelligent Systems for this. I find this to be quite hyperbolic and false, and that the worst that can be claimed of Intelligent Systems is that it wrote a bad support for an inconsistent character. I felt that I should at least offer some perspective as someone who’s been following the game, has some understanding of the overall plot and supports, and offer a more moderate opinion.

First, I shall briefly describe the support, in order to provide context to the situation. Soleil has issues with dealing with very cute girls, not girls in general, and finds herself becoming lightheaded around them. She sees this as a weakness, and wants to do something about it. Enter Corrin, the male avatar and naive do gooder. He wants to help her, so he puts a magical powder in her drink, without telling her, that makes her see men as women and vice versa. Corrin tells Soleil what he has done right after she drinks the powder and explains that they shall now role play in order to help clear her of this problem, and Soleil accepts.

The powder DOES NOT make her actually think of men as women or anything like that. She still hears their voices the same, and knows their true gender. The powder is also temporary, with its effects wearing off by the time of the next support. The next section of the support shows that the experiment did not have the desired effect: Soleil still has trouble with cute girls. This also shows that, despite the claims of gay conversion many are harping on, there is no demonstrated effect on her sexuality. Soleil still finds girls attractive. The S support has Corrin proposing to Soleil, and her accepting. She notes that she started thinking of Corrin as someone she could be attracted to due to the experiment, which causes Corrin to exclaim “Oh, god.” Soleil follows this up by noting thats she saw all the men as girls, and yet only felt this way about Corrin. The ethics of this action are another point of debate, and I wish to stick to the topic at hand. 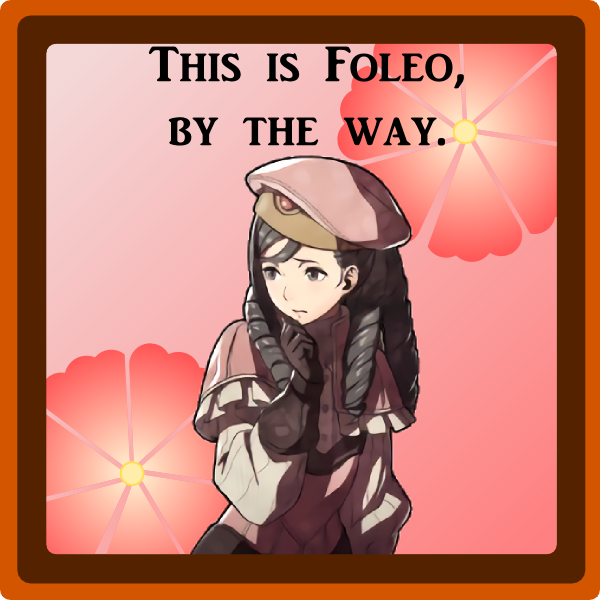 The support isn’t well written, I must admit, but that’s the end of my concern with it. The game shows that Soleil can S support (marry, basically) with other men. There’s nothing unique about her attraction with Corrin, other than the circumstances. She isn’t a lesbian, but is at least bisexual. There are some who argue that she is used to appeal to fans of Class S relationship fiction, as it’s called, but my familiarity with such a subject is rather vague.

The game presents it as Soleil merely not finding most men to be as cute, and thus is more attracted to women. Soleil does mention that she doesn’t particularly discount being in a relationship with a man, as she states this in her support with Foleo: “I wouldn’t say unacceptable, but girls are preferable by far. I mean, like, boys don’t have any beauty, right? Looking at them doesn’t get me all fired up.” Soleil simply finds girls to be more attractive than men, on average, but does not say that she can’t fall in love with them.

Speaking of Foleo and Soleil’s support, I find that this best demonstrates Soleil’s sexuality in a way that’s easy to understand. The first set of dialogue in the support involves Soleil chasing after Foleo, thinking that Foleo is a girl. Foleo tells Soleil that he is a boy, despite his looks, and that she shouldn’t be chasing after him. It is only in the A support that Soleil finds this out, and after some initial disappointment, resolves that his gender is unimportant and that she finds Foleo to still be attractive. In the S support, Foleo confesses his feelings to Soleil and asks to be in a relationship with her. Specifically, Foleo says “I like you, Soleil,” and her response is “but I like you too, Foleo. As a man.” This is where Jed Whitaker got confused.

In Japan, the phrase “I like you” is usually equated to a profession of love. The more bold phrases such as “Aishiteru” and “Daisuki” mean love, but are seen as rather bold unless already in a relationship. Hence, the term “Suki,” or like, is used. Finding the exact meaning of these phrases depends on context, and thus can seem confusing to those who do not understand the culture. The “like a man” phrase also caused some confusion for Jed, as it seemingly implied that her attraction to Foleo is platonic. Soleil says that she likes Foleo, as a man, because of Foleo’s insecurities due to people seeing him as being too feminine. This is more implied in this particular support than stated, with other supports expanding on this more, though Soleil is able to pick up on it.

So, how did this begin? Well, a Tumblr poster (I ask that people do not message her in response to this article, as she has been receiving harassment as of late) got a hold of the translation of the support and misconstrued the meaning and even circumstances of the support. She saw Soleil’s issues with cute girls as her saying that her attraction to girls is a weakness. This is untrue, as Soleil is fine around most girls. She’s merely affected by particularly attractive ones, and even then, she’s still able to function on the battlefield just fine.

Soleil wants to be seen as a “cool, strong woman,” and her dizzy spells are hindering her from that goal. She saw her attraction to Corrin as being caused by a powder, and that she was made straight by the powder, or that Corrin administered the powder to make Soleil fall in love with him. She fails to notice that Soleil can still marry men, the effects of the powder were only visual, that the effect of the powder was temporary, that she still hits on girls after the particular event, and that Soleil mentions that she saw everyone differently due to the powder, and that only Corrin had an effect on her. I do wish to add that the specific Tumblr user has, as of late, come to acknowledge the inaccuracies in her initial account of the support. While she still does not like the use of the powder, which is a fair point, she has relented on the rest. While not all media sites used her as a source, she was the initial spark that set off the outrage for many.

One of the biggest issues with Soleil is that she’s somewhat inconsistent. She talks about finding girls attractive, but her S supports are all with men. Much, though not all, of her supports with men are rather jarring in their transition from A rank to S rank supports. This tends to paint a rather negative picture of the overall game when, really, this only applies to Soleil. I do find some of her supports to be good, but much of them focus too much on her attraction to girls. That is not to say that all the supports of every character have low-quality supports, as many are quite well written, but it is unfortunate that some characters aren’t up to par.

The other factor involved is the use of social media, news, and blogs in the spread of this narrative of homophobia. They fail to mention the supports that have same-sex couples, and that the supports treat it as normal. There is some “but I’m a girl/guy,” sure, but Corrin is quick to note that it doesn’t matter. He/She loves them anyways. It’s a bit heavy handed, I must admit, but it still treats the matter with at least some respect. There’s no prolonged utterances of denial or anything similar to that.

In conclusion, I feel that much of this controversy was overblown. I’m not here to state if the industry does or does not have have an issue with portraying homosexuals in its games. I am not here to make a definite political statement or anything like that. I’m just here to point out, that in this case, there is not such an issue. The use of the powder may merit some discussion, yes, but this is not about that (nor is it a discussion that I feel I can adequately cover). I hope that you can agree with me that cooler heads need to be used in such situations, lest rhetoric get out of control. Thank you for your time.