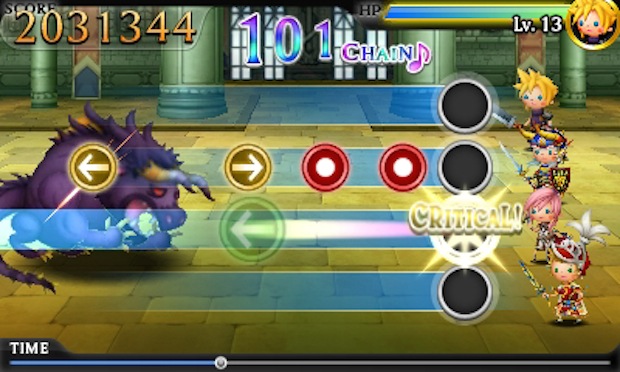 I’m good, man. Totally good. It’s only the first day of Tokyo Game Show but I’m already good. I found my game to love, and I can’t quit talking about it. I’ve told everyone how much I love Theatrhythm Final Fantasy after playing it today. No one believes it’s that great until they play it. I think the last guy I told rolled his eyes at me. I don’t care.

You’ll like it. It mixes all the great music of the Final Fantasy series, powerful fan service, and a few fun twists on rhythm gaming to make a game that I played a dozen or so times today. I kept going back to it!

Nintendo’s touchscreen-equipped portables work well for rhythm gaming, as proven by titles like Rhythm Tengoku and Osu! Tatake! Ouendan, so it’s not like Square Enix created something brand new here. It’s tapping and sliding to the beat, just like the others. What really makes this one work is the inclusion of all the best songs from the world of Final Fantasy. These songs, pulled from games 1 through 13, are familiar to series fans, making the game really easy to get into.

This great music is synchronized with adorable art. Little deformed, dot-eyed versions of all of the main characters from the Final Fantasy series will win series fans over. Who wouldn’t love cute little Squalls and Lightnings running around onscreen? 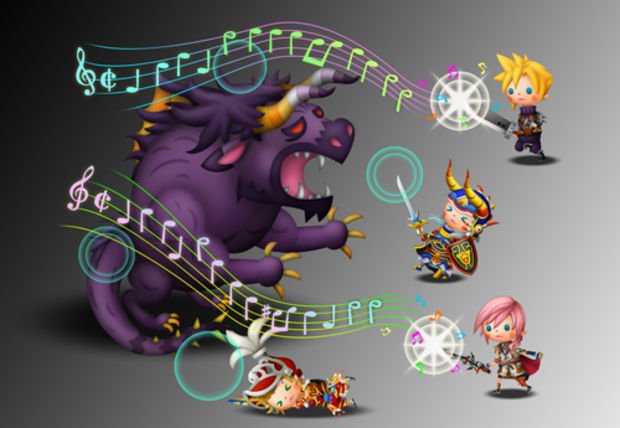 Gameplay has you tapping the screen to visual cues, just like you would in something like Namco Bandai’s Taiko Drum Master. Directional screen swipes and hold-and-release patterns mix things up a bit. I really liked how tapping and line tracing to increased the difficulty a bit in some modes. Mix these input methods up and slide them on horizontal lines that move toward a threshold and you’ve got a pretty good picture of how gameplay works in Theatrhythm.

Three different gameplay styles work to bring some role-playing feel to this rhythm game. The three modes, Battle, Field and Event, all match the original song usage in a way.

Battle songs’ levels are staged as a cute-ized battle encounter, complete with four party members that sort of send out attacks with correct beat taps and swipes. Mess up the rhythm and you’ll lose hit points. Keep doing well and you’ll progress through the battle. Do really well and you’ll actually use rhythm to summon beasts in classic Final Fantasy style. I was so good at tapping out Final Fantasy VII‘s “Sephiroth’s Theme” that I was able to summon Ifrit to do some big damage. But forget the typical big and scary Ifrit — this little one was adorable. 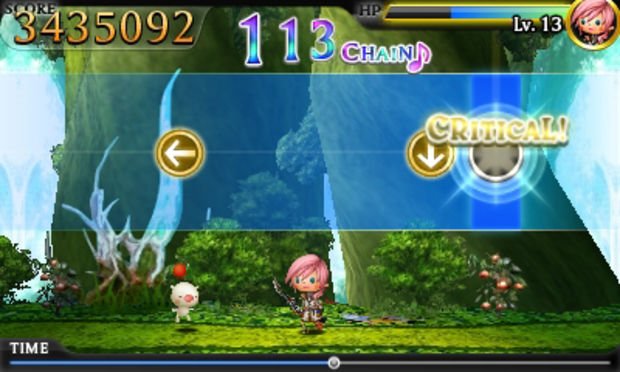 Field mode has your character marching through a 2D background while you tap out rhythms in the foreground. I was able to march to “Terra’s Theme” from “Final Fantasy VI” in this demo. Unlike the Battle mode, where commands come straight across four horizontal bars, the Field mode uses most of the screen, and it requires you to trace waving lines with the stylus. You’ll have to work to keep in line and match the rhythm by passing over beat points. Flub up and your character will trip and fall on his/her face. Do well and your character will change out for another. I was able to keep perfect time and ride a chocobo.

The Event mode has you tapping out more free flowing inputs over a cinematic event from the latter games of the series. Instead of lines or waves, you’re required to tap all over the touchscreen. I was able to try out one of the cutscenes from Final Fantasy IX and I found that this mode was a bit more relaxed and slower paced than the other two. 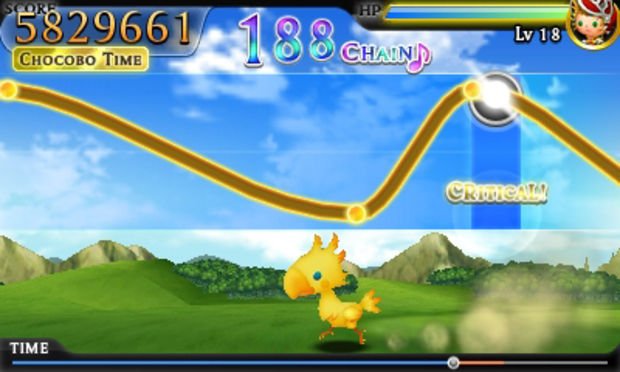 If you’re hardcore about rhythm games and have been wanting a solid challenge, Theatrhythm won’t disappoint. “Clash on Big Bridge” from Final Fantasy V was a bit of a bitch, and the Tonberry I fought during Final Fantasy XII’s battle song really had me sweating. I failed the Final Fantasy VI battle song every time I tried, but I never got tired of retrying. We’re talking fast tapping, crazy rhythms and high tempos. They’re hard but fun.

While it’s clear that I adore this game, it should be said that I’m a musician, a big game music fan, and a dedicated follower of the Final Fantasy franchise. This game was made for me. It’ll do less for you if you’re not really into Final Fantasy or tapping a screen to the beat with a stylus. If you’re in that camp, don’t tell me. I don’t want to hear it.

Everyone else? You’re going to join me in saying that this is the best thing ever.