But Puzzle & Dragons is huge here

Gung Ho? See what I did there?

This booth attendant doesn’t look very gung ho about having to stand there with a control info card, but she should be as mobile free-to-play title Puzzle & Dragons is huge here in Japan. The Gung Ho booth has been completely full and quite lively this week at Tokyo Game Show as players line up to try the 3DS version of the hit mobile game, titled Puzzles & Dragons Z.

The franchise is massive here in Japan. We told you back in February that Gung Ho was making $2 million a day with this title. They now have a massive following of more than 13 million registered users. A fair percentage of the population of Japan is playing this game.

Puzzle & Dragons, or Pazudora as they call it here in Japan, has such a loyal player base that they have meeting events where people play together. Bars, even. Clubs. Social groups. It’s crazy. I’ve seen several signs in restaurants and other public places that ask players to refrain from playing Pazudora there.

The game is so big that retailers have dedicated merchandise sections for the franchise. Toys, plushies, and other wares line shelves. I’ve seen so many people playing this game around Tokyo that I’m starting to feel some kind of peer pressure. 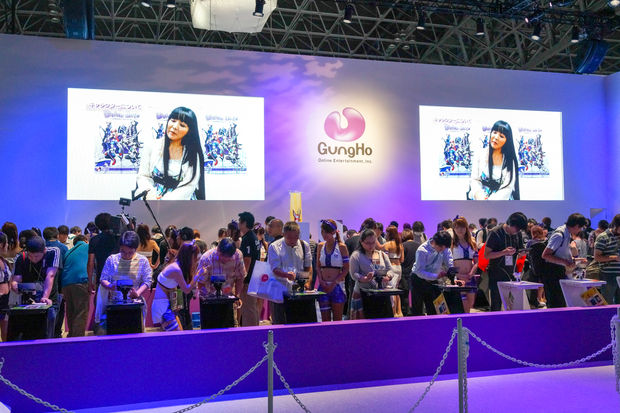 But I started playing Puzzle & Dragons a few weeks back out of curiosity. I’m not head-over-heels in love with it like some of these folks are, but it’s still a great casual game that mixes gem matching puzzle play with dungeon crawling roleplaying. I’ve sunk more than a few hours into it already.

Both the curiosity and the peer pressure will have me waiting in line to play Puzzle & Dragons Z tomorrow at TGS. It does away with the mobile version’s pay content and turns the dual mechanic game into a full adventure title. To me, that sounds even better than the original

Japan will see the release of  Puzzle & Dragons Z on the 3DS this December. I’m sure we’ll see a release in the west not too long after.