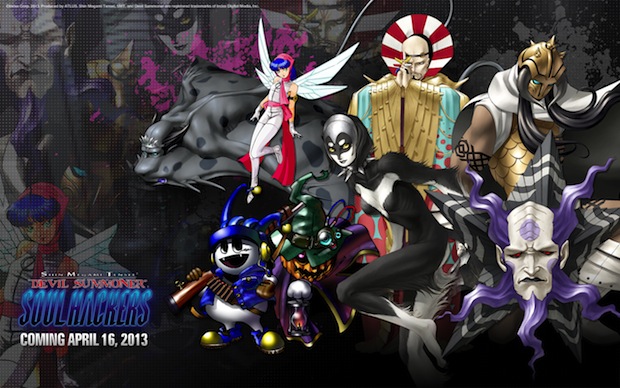 Shin Megami Tensei fans are probably already downloading Devil Summoner: Soul Hackers, but if you haven’t done so yet, check this out.

Today, we’re going to give away a handful of codes for Atlus’ latest 3DS release to those that list out for us their favorite Shin Megami Tensei series games in our comments. Anything from the franchise is fair game. Try to sell us (and everyone else) on the top selection of your list of five — let us know why it’s the best one. The idea here is to spread the popularity of this amazing RPG series.

The best pitches we find in the pile will get sent a code to download Devil Summoner: Soul Hackers from the 3DS eShop later today. We’ll keep this short so that participants can start downloading this evening, so have your entries in before 3:00 p.m Central time. We’ll announce the winners at 4:00 Central.

See my entry below as an example.

For me, Nocturne still stands as the best game in the SMT franchise. Atlus always packs their games with style and imagination, but no game has ever come together as well as Nocturne did. To me, this game is still their crowning achievement.

It’s dark, weird, incredibly deep, and very memorable. There’s still nothing else quite like it. This is the game where I fell in love with the Press-Turn battle system, and it’s also the first game that had me neck deep in demon collection. Crazy good cel shaded art, fantastic music, and a story that lets you make some pretty big choices.

Nocturne is definitely my favorite Shin Megami Tensei game, but it’s also near the very top of my list of the best games I’ve ever played.