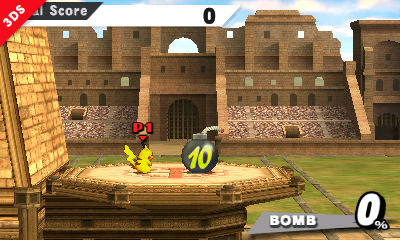 In addition to the RPG-like dungeon crawl mode that involves players picking up power-ups and stat boosts for their impending fight, another minigame is in for Super Smash Bros. 3DS — Bomb Blast. It works a lot like the Home-run Contest, but instead, you’ll beat up a bomb, then launch it into a giant structure with various targets.

The more targets you blow up, the more points you earn, and the structures are set up just like Rovio’s famous Angry Birds. It is now officially acceptable for die-hard Nintendo fans to like Angry Birds.