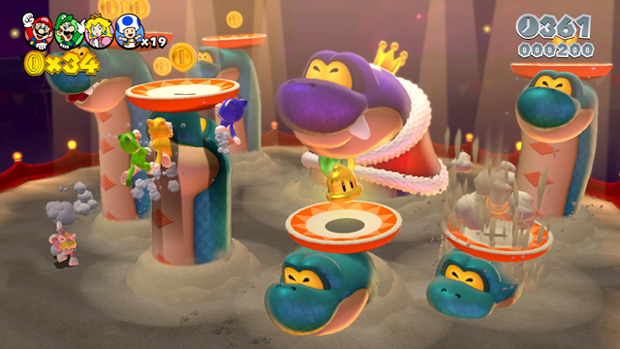 No, it’s not Galaxy 3 — and I would have been upset if it was. Rather, Super Mario 3D World is taking the 2D-3D hybrid platforming of Super Mario 3D Land on 3DS, incorporating the multiplayer chaos of New Super Mario Bros. Wii and U, and slipping the cast into kitty pajamas.

Mario has worn some cute outfits in his day, but you are seriously not prepared for the cat suit. Squirrel Mario? It’s a smelly, flying rodent compared to Cat Mario.

If you’ve played Super Mario 3D Land, you know what’s up. Instead of the sprawling open worlds of past 3D Marios, you’ve got enclosed spaces with a flag planted at the end. The difference this time is that four players get to muscle one another on their trek towards the finish.

Making her grand return as a playable character is Princess Peach, taking the place of Yellow Toad, a.k.a. Ala-Gold. Yep! No more waiting around in castles for her! And similar to Super Mario Bros. 2, each character has a unique attribute — Mario is the all-around dude, Luigi can jump super high, Peach can hover short distances, and Toad is the fastest runner.

Playing with a full party can be as frustrating as in NSMB Wii and U, so you can tap a button to go into a protective bubble at any time. But unlike NSMB, you can pop yourself out of the bubble — no need to wait for one of your selfish “friends” to bust you out.

A single player can of course rock the GamePad (with gyro-enabled free look) while other players use sideways Wii Remotes. But have no fear! You can opt to use the Pro Controller instead!

The biggest draw is of course the cat suit, which is granted once you find the bell power-up. As Kitty Softpaws, you can perform a cat scratch, scramble up walls, and perform a claw dive that wouldn’t look out of place in Divekick. And you look sooo adorable with your fluffy fur and ears!

Oh, and are you sick of trying to jump to the top of the flagpole and missing? As a cat, you can just run up the pole! The cat suit is a game changer, guys!

3D World director Koichi Hayashida and producer Yoshiaki Koizumi explained to me that the idea to use a cat to represent theses new mechanics derived from one of the other members of the dev team, who has a habit of drawing tons and tons and tons of cat pictures. Hayashida and Koizumi liked the pics so much and realized that a cat would be perfect for what they’re trying to implement.

This may not be what we were expecting out of a next-gen Mario, but friggin’ cats, man! And you’ll get to play with the kitties this December.