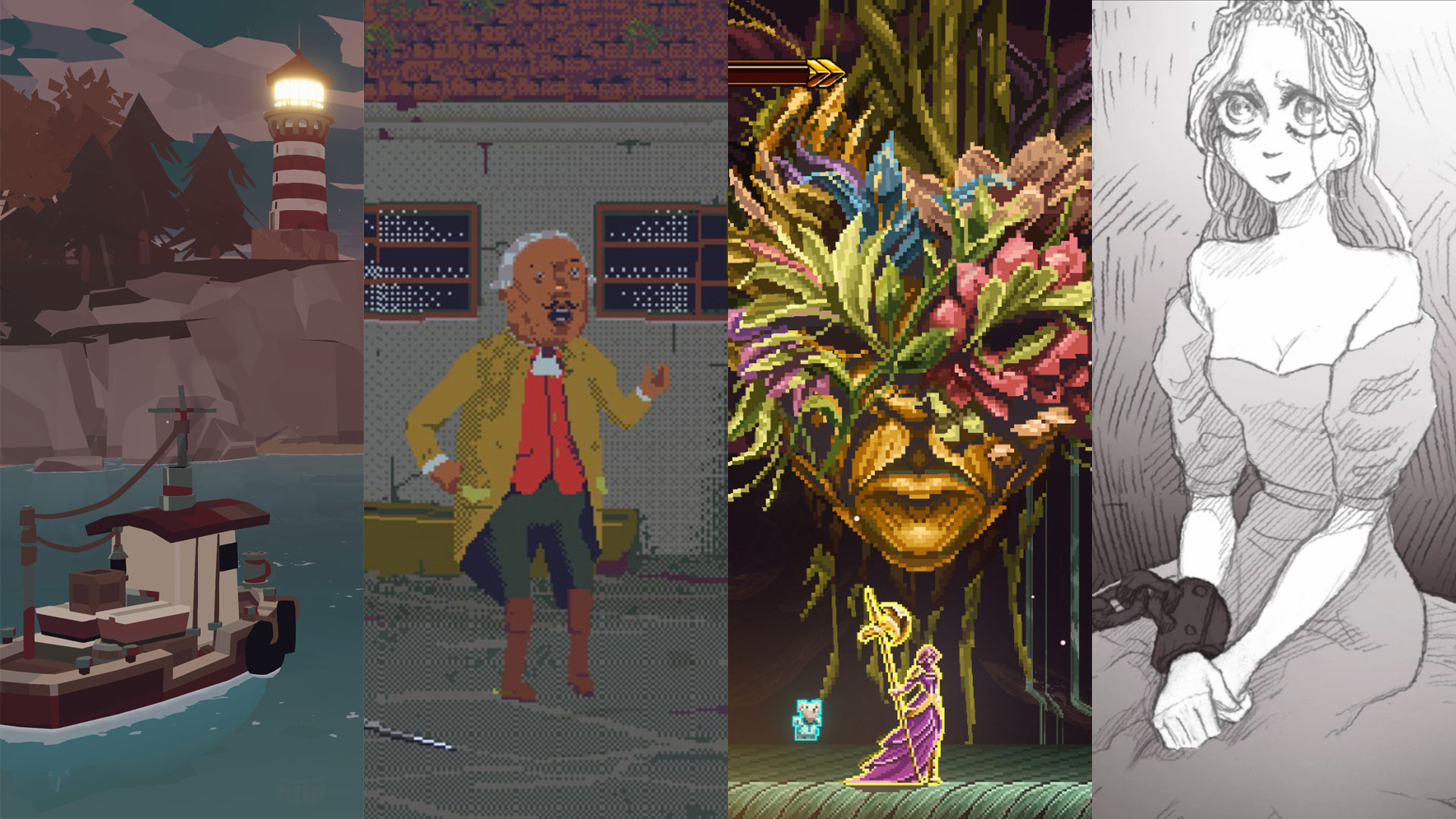 A slice of what’s in store for Steam

Valve is hosting the October Steam Next Fest right now, full of demos, livestreams, and more about games coming to the Steam platform.

There are actually hundreds of free, playable game demos on the platform right now from October 3 through 10. It’s a great time for developers to show off what they’ve been working on, put more eyes on their Steam store pages, and accrue some coveted Wishlist additions.

With so many demos available, though, it can be a bit daunting to find exactly what you might like. Or to stumble upon something you didn’t expect. That’s where round-ups like these come in.

While by no means comprehensive, I’ve been spending the last few days digging through the lineup, playing demos, and adding them to my to-play list. Some of these games are ones I’ve played and can recommend, others are on my shortlist, and even more I just dig the vibes.

If you’re looking for some pointers on some Steam Next Fest demos to check out, here’s a quick rundown.

On its face, a game featuring a gun-umbrella combination is already pretty interesting. It’s got almost a Bloodborne switch-weapon kind of vibe, reminiscent of a similar weapon seen in the Kingsman movies. What really makes Doinksoft’s Gunbrella click isn’t standing still and firing bullets from behind an umbrella, though; it’s the movement.

Gunbrella lets you zip around levels like a candy wrapper caught in an updraft, bop onto heads, and then unload shotgun rounds. It just feels darn good to play. Most demos, I try to play around 15 to 20 minutes, just to get a sample and move on. I finished Gunbrella‘s demo and wanted much more.

Find it on Steam here.

There isn’t too much more to say about Potionomics that I didn’t already say in my preview write-up from PAX East 2022. Its immediately charming art style draws you in, and then its dense but carefully layered systems keep you playing more. It has social links, shop management, deck building and strategy, and a lively cast of characters. Safe to say this is one of my more anticipated games for the month, and it’s actually coming out pretty soon too.

Check it out on Steam here.

Jordan’s writeup about the reveal of Dredge already had me intrigued, but the actual demo has me on the hook. Yes, it’s a fishing game with some light Resident Evil-style inventory management. It’s very pretty in motion. But good lord, is it creepy. Do you want a fishing game with some Eldritch vibes? Does the thought of fishing alone at night, in the dense fog, with no companion aside from your flickering boat light intrigue you? Then you might just dig Dredge.

Check it out the Steam Next Fest demo here.

The Case of the Golden Idol

One of my first big surprises of the Steam Next Fest demo rollout was The Case of the Golden Idol. The art style is going to be what catches your eye, for better or worse. It’s expressive and often gruesome. But that really fits what developer Color Gray Games is going for. In each puzzle, you’re zipped into the scene of a crime, and left to use logic and deduction to figure out the whodunnit, as well as several other pieces of information.

The Case of the Golden Idol has a really great mix of just enough info to get the cogs turning, without ever feeling like it handed anything to me. Fans of Return of the Obra Dinn should absolutely have this on their radar, as it comes out on October 13.

You can give The Case of the Golden Idol a test run here.

Black Tabby Games’ Slay the Princess already had me in its claws with its exceptional trailer and concept. Playing its demo, though, I’m both intrigued by what I’ve seen and extremely curious to see where it all goes from here. This demo has several different endings, and all of them seem to layer and build upon each other in a way that’s both impressive and a little terrifying, thinking of the design that’s gone into it. This was another demo that I got to the end of and immediately wanted more.

Find your own route(s) through the Steam Next Fest demo here.

Many of my picks so far have popped out to me thanks to their art style, and 9 Years of Shadow is certainly no different. While the screenshots look gorgeous, it’s the intro of the demo that really hooked me in. Halberd’s Metroidvania definitely has the Symphony of the Night vibe to it as well, and it feels pretty solid to run around and slash away in. It’s one to watch for folks still looking to get their 2D side-scrolling search-action fix.

Winning the Don’t Judge By The Cover award for me in this Steam Next Fest is Inkulinati. This scribe-centric strategy game has some really solid tactics at its core. I went in assuming it would be jokes about farts and Monty Python references, and to be clear, there are farts. Despite that, I really dug the careful tug-of-war that Inkulinati plays out across its pages, weaving the real history of marginalia into a strategy game that clicks pretty well.

Try out the demo for yourself here.

If deckbuilding is your favorite way to pass the time, Wildfrost has some interesting ideas going for it. One part I really dug was how neatly everything was explained; it was never too hard to click on a card and get some info right away. The cards that fill your deck are all fun and cute, and it just feels like a very cozy, chill deckbuilding strategy. Some of the lane and countdown clock aspects can be a little hard to keep track of as matches go on, but that’s about my only nitpick of an otherwise very fun card-based rogue-lite.

Check out the Steam Next Fest demo here.

This adventure title popped out at me as I was rolling through the different menus on the Steam Next Fest, and yeah, Venice 2089 is rad. It’s a bit of exploration and adventure, as the focus is largely on talking to characters, taking in the sights and story, and cruising around on your hoverboard. But not only is the setting, as a slowly sinking city of Venice in the future, super interesting. It’s also just got a good mix of music, art, and overall atmosphere to create a really chill experience that I liked getting lost in.

Try out Venice 2089 for yourself here.

Alambik Studio’s Diluvian Winds feels like the meeting point between the likes of Spiritfarer and survival city-builders. You manage a rotating group of animal pals, who drift in and hang out for a bit, helping you build up a community that can support itself as the days go on. Eventually they drift along, but their contributions remain, and that part really stuck with me.

Eventually, unpredictable weather starts to throw wrenches into the gears. But in my demo playthrough, I just really liked seeing new people show up, add something of themselves to this island hamlet, and then move along to somewhere new.

Give it a shot on Steam over here.

I got to check this one out at PAX East 2022, and now a demo is widely available. So now you, too, can experience the magic and chaos of building a Lego build that crumbles before your eyes.

But seriously, this is a really interesting implementation of physics and bricks from the folks behind Bridge Constructor. It makes Lego feel like the medium, as much as the subject, and it was really cool seeing my builds come to life in-game the further I went.

Build your very own Lego Bricktales builds in the demo here.

Normally, I try to avoid anything too story-heavy in a demo fest. I just like to experience it all in one go, you know? But I peeked my head in to check out the general vibes of Riley & Rochelle, the new detective-y game about piecing together a rough rockstar relationship. It’s got some solid writing and good art, and the wonderful music really works as connective tissue, tying it all together.

I only solved a couple diary entries before I bounced out, but this is another mystery game to check out, especially if you like a little musical twist.

Find the demo on Steam here.

That’s all for our own round-up, but please feel free to shout-out some of your favorites from this month’s Steam Next Fest below in the comments! There are literally dozens upon dozens of demos to play, so shouting out your favorites and making sure to Wishlist them always helps.