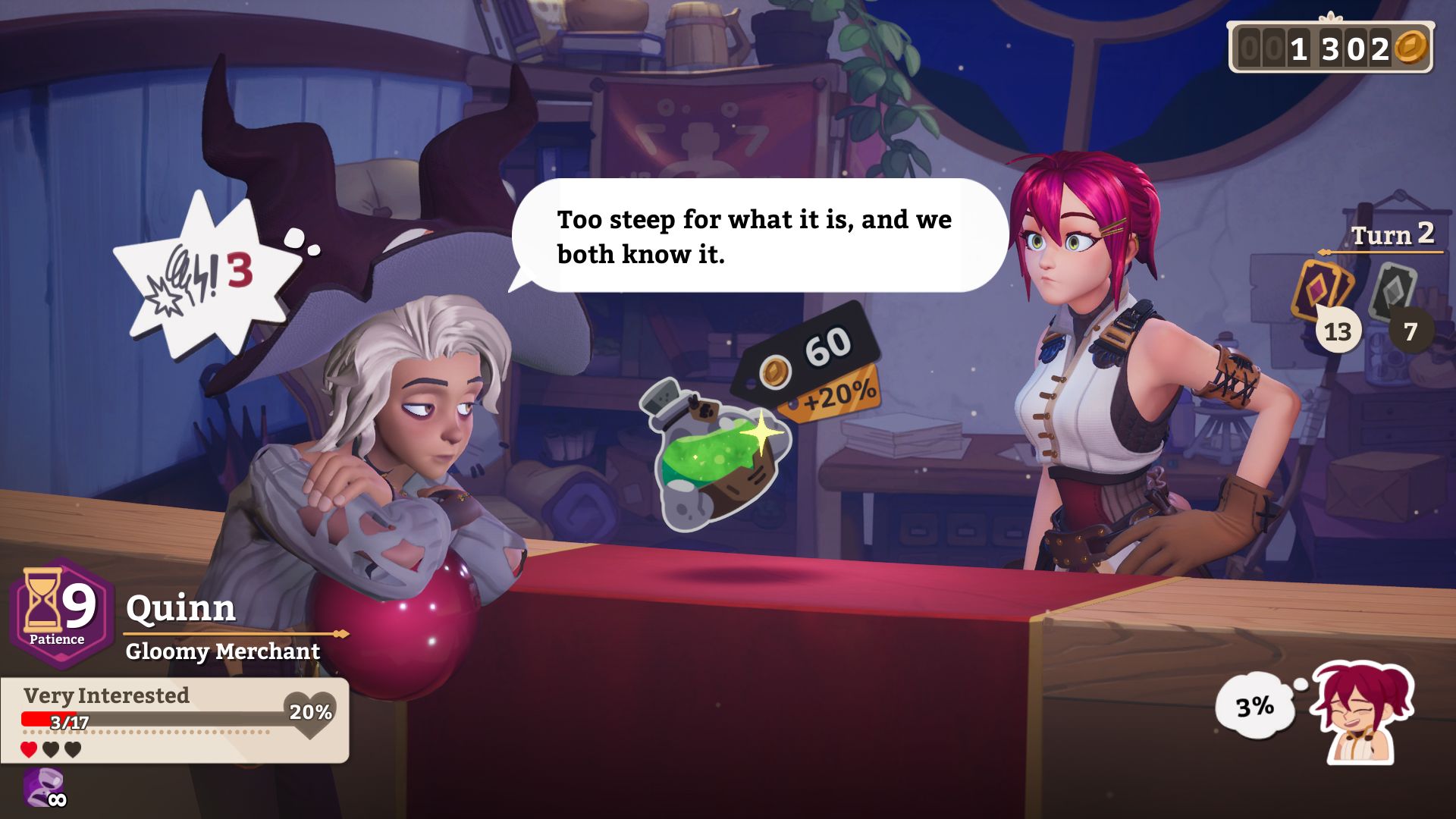 Love and cards in the age of potion economics

Potionomics can seem like a lot up-front. Within minutes of starting my demo at PAX East 2022, I was brewing basic potions, stocking the shelves, and opening up shop. Customers approach and haggle, taunt and flirt. It’s charming, expressive, locks its different parts together well, and has been one of the games I can’t stop thinking about coming out of PAX.

The story of Potionomics follows Sylvia, a young and aspiring brewer who inherits a rundown store from her uncle. I didn’t get too many chances to dig into the broader narrative in the demo I played, but suffice it to say, uncle disappeared in a mysterious manner.

My time was spent getting the shop up and running again. Sylvia’s relative didn’t leave her the nicest place, and day one starts with a basic lesson in brewing. This is the first part of the Potionomics formula: making the actual potions. I could dump in ingredients from a list, and a recipe on the side informed me the right balance needed to concoct certain solutions.

As time goes on, there will be demands to meet and rarer ingredients to add into the cauldron. That’s for the future; for now, I need to make some cash. Sylvia’s owl helper informs her that some of uncle’s old potions are still around, and we should sell them off. They’ll make for good seed money, and they’ll give her some practice in dealing directly with customers.

As I set those aside to brew, it was time to open up and sell off some of my uncle’s lingering stock. Here, Potionomics goes from brewing and management to an actual card game. Customers approach the counter with a potion of their choice, plucked from shelves (which can also have modifiers that, for example, make potions more appealing).

When they approach, a battle of wills starts. Everyone has a limited amount of patience, which meters how many actions one can take. Everything, even ending a turn, wears on patience. And when the customer has their turn, they can get antsy, or hit Sylvia with stress modifiers. Better to close out on your terms.

For the store’s advantage, you can play cards like Reel ‘Em In, which raises interest in the potion and gains a bonus if it’s the first card played in a turn. Then hit them with a big exaggeration of value, and guard yourself for their response. All these verbal tactics are played as cards, and balancing them feels really good. Even early on with basic cards, hitting peak interest—resulting in the highest sale price—feels great.

Different named characters help build out Sylvia’s repertoire, too. During my demo, a few storegoers struck up conversation, giving Sylvia ideas about how to handle certain situations. One merchant suggested an aggressive approach, giving me a card that both increased interest and gave me a card draw. My owl companion, meanwhile, recommended taking a moment to breathe and collect myself if I’m blanking on options. The resulting card was essentially a mulligan, letting me dump my hand and draw the equivalent number of cards.

Potionomics writer and narrative designer Nick Eliopulos tells me more cards will be added as the narrative progresses, leaning into different styles. Some might encourage a hard, fast sales pitch, while another might want the player to string negotiations out. One that really interested me was one that could utilize stress, the usual punishment for misplay in the form of unplayable cards, to my advantage.

If you’ve played Slay the Spire, Potionomics’ haggling should feel right at home. It’s a similar balancing act of resources, playstyle, and making the best out of your hand at any given point. And there’s still another part.

Love potions in the air

Learning new tips and tricks from characters will require getting to know them. And over time, you might want to spend some more time with those characters, too. Social links, dating, whatever you want to call it—Potionomics has it.

During my demo shop tenure, one questing adventurer named Mint came in to ask Sylvia about her stock. She wanted to know if other great adventurers were shopping there, as she was on the road to being the best too. And I could either make small talk, or give her a compliment, saying she sure does have the muscles for adventuring.

Of course I choose that option, making Mint blush a bit and a heart pop up in the corner. Points scored, I guess! Eliopulos confirms there’s a variety of romance options in Potionomics. It’s nice to have them, both as a way to break up the otherwise visual novel-alike story segments and to bring it back around to the deckbuilding.

It’s also worth mentioning here that Potionomics is incredibly charming in motion. It’s got a look that reminds me of a lot of things; Avatar: The Last Airbender, Pixar animation, even 2017’s Battle Chef Brigade. Characters emote and express in very anime fashion, and all the colors and distinct styles of important characters really makes the world pop.

Potionomics has been in development since 2015, so it’s been a long time coming. Eliopolus brought up Recettear when we discussed inspirations for developer Voracious Games’ project, which makes total sense. You can see the similar balance of store management and RPG elements, and it works very well. I was really impressed with how all the elements of this world, from managing the store and brewing to card game haggling and dating, clicked together into one piece. It might sound overwhelming, but it works seamlessly in practice.

I spent about 20 minutes with Potionomics at PAX East, and all I’ve really wanted since is more. Mark this down as one of my most anticipated games coming out of the show, and one to watch for item shop RPG enthusiasts. Potionomics is aiming to launch this fall on PC, and you can wishlist it here.