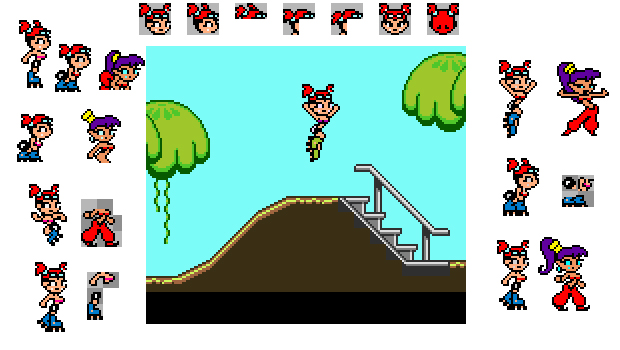 Lets hope for Xtreme Belly Dancing in the sequel

Before WayForward hit Kickstarter success and critical acclaim with their Shantae series, they got their feet wet on the Game Boy Color with Xtreme Sports. It was their first game on the handheld, giving it special sentimental value to Matt Bozon and the other old timers at the studio The game just went on sale on the 3DS eShop Virtual Console, but due to to no fault of WayForward’s, it’s nowhere to be seen on the storefront. If you don’t search for it specifically, you’ll probably never find it. I blame Gunvolt (which is also a lot of fun).

To help promote the game, Mr. Bozon sent over some of the secret files from the development of the first Shantae, also on the Game Boy Color. According to Matt, Shantae’s base in-game art was based directly on Guppi, the female lead from Xtreme Sports. He even sent along some sprite sheets to prove it. They also passed along some redrawn HD artwork for the game, which gives us a hint of what Xtreme Sports 2014 might look like.

Shantae was considered a technical marvel of 2D animation by Game Boy Color standards. Knowing that it rose from the meat and bones of Xtreme Sports, like some sort of Cenobite puzzle box victim, may cause fans of the series to give the game a second look.