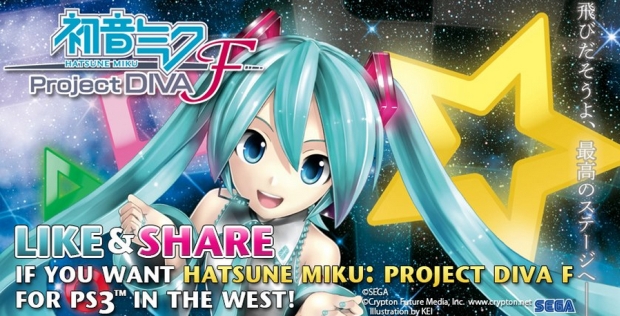 Shall social media be her savior?

If you’re at all familiar with the Hatsune Miku phenomenon, you’ll know that her Japanese creators and handlers have long been interested in marketing their virtual idol overseas, the better to let foreigners know of her crowdsourced joys.

From Toyota commercials to Mikunopolis, to an actual presence of her PS Vita game at E3 2012, Crypton Future Media and Sega have sent feeler after feeler. And now they’ve made their most overt probe yet: a Facebook campaign.

Sega’s Facebook page posted the above photo, with the rather clear message: “Like and Share [this photo] if you want Hatsune Miku: Project Diva F for PS3 in the west!”

And that’s pretty much it. To paraphrase the artist livetune’s popular Miku song, if you want it, Tell Your World. As of this writing the photo has garnered a shade under 3,000 likes.