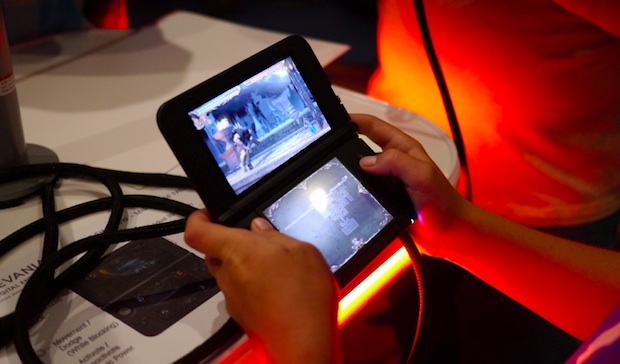 We poked at and fumbled around with Nintendo’s shiny new 3DS XL at their showcase here at San Diego Comic-Con this morning and got to see how it features more locking and snapping than any other portable before it.

The screen of the XL has three very distinct stop points when opened. There’s a mostly straight up ‘L’ shape, an optimal tilted back position, and a full-open position. These positions have a very defined snap, which has the screen stopping tightly in its preset places — no wobble. I wonder why there’s one more snap position now, though.

Speaking of things snapping into place, the 3D slider also has a new off position that also comes with a defined snap. The 3D slider still lets you set your preferred level of 3D effect, but beyond its lowest level, the effect can now be fully switched off with a new notched setting. No more accidentally pushing on 3D. Oh, and the annoying backlit 3D indicator is now gone.

Overall, I’m impressed with the 3DS XL. It feels great in the hands, the new screens are huge, and the 3D is somehow easier on the eyes.