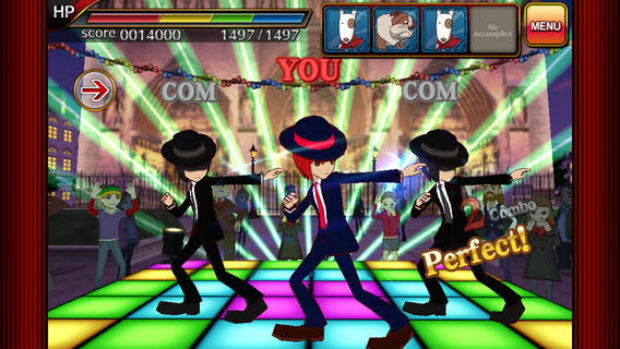 The Paris Caper vs. The Emperor’s Treasure

As you may have noticed, Rhythm Thief hit the iOS marketplace last week, but it’s not the same game as the 3DS version. Even though I knew they’d be different, after some extended testing, I discovered for myself that The Paris Caper (iOS) is basically an abridged version of The Emperor’s Treasure, which hit the 3DS in 2012.

The good news is, most of the parts that made Emperor’s Treasure great are intact. Nearly all of the rhythm sequences are there, and although the story is cut a tad, it still has the same charming characters as the original. But it’s not necessarily less content heavy than the 3DS game, as a bunch of new exclusive minigames have been added — presenting twitch activities like “tap the numbers in order in a certain amount of time.” The touch controls are basically perfect, and I didn’t have any issues with any of the minigames.

The iOS version also adds “accomplices,” which are basically a fancy way of saying “buffs” for your character, like adding extra score potential or safety nets to avoid failing missions. It’s almost unnecessary, but since accomplices can be mixed, matched, and leveled up, it’s a fun way to add some more RPG elements to the experience. There is an in-game shop, but it’s pretty inoffensive and mostly consists of costumes.

The only major flaw with The Paris Caper is that it requires an internet connection to play. It’s a very, very odd requirement that I hope is patched eventually, and I know a lot of you will be ignoring it completely because of it. Overall though I did enjoy my time with Paris Caper, and I sincerely hope Sega isn’t done with this IP. It basically reminds me of Lupin III: The Rhythm Game, and I really dig it.

If you aren’t down with iOS, look for a cheap copy of it on 3DS.