When you go to the store and buy a pet rock, a fake piece of poo, or a movie called L3GiT-Sh*theads The Movie, you shouldn’t go home with your purchase expecting much fun upon your arrival. That’s the kind of game Zombii Attack is. If you’ve done any research at all on this title (like, just reading the name should be enough) and you’re still under the illusion that it might be a well-made game, then you probably only have yourself to blame.

The weird thing about obviously terrible games like this is that they are sometimes more fun than you’d expect. I figure that’s part of why Cow Clicker turned into a thing for a while there. Sometimes a game can be so dumb that it actually makes you think. Sometimes a game can be so terrible that you can’t help but laugh, and therefore, you’ll have a not-so-terrible time while playing it.

I went into Zombii Attack hoping I’d have that kind of Cow Clicker “fun.” Is the game an effective parody (intentional or unintentional) of both gaming’s most overused cash cow character (the zombie) and of its most soulless game design hook (the Angry Birds-style physics launcher), or is it just a terrible time that will make you hate your mind and body?

One of the things I tell people who are just getting into game reviewing is to let go of everything they think they know about what makes a game “good” or “bad.” Going into a game with preset concept of what constitutes a worthwhile experience game can blind you from seeing what a game really has to offer. If you go into a game looking for specific things that you think are key to determining a game’s relative worth, you may not see the things it really has to offer. Spend too much time counting pixels in a game’s various texture maps or polygons in a game’s character models, and you may miss out on the ideas that the game’s designers intended for you to appreciate.

That’s how I went into Zombii Attack. I didn’t hold the game’s substandard graphics, idiotic premise, or developmentally disabled gameplay against it. That definitely helped me to enjoy it, but it wasn’t enough to overcome the sad fact that this is a one-note tune that sounds funny at first but will literally turn you into a non-human by the end of its 18 nearly identical levels. 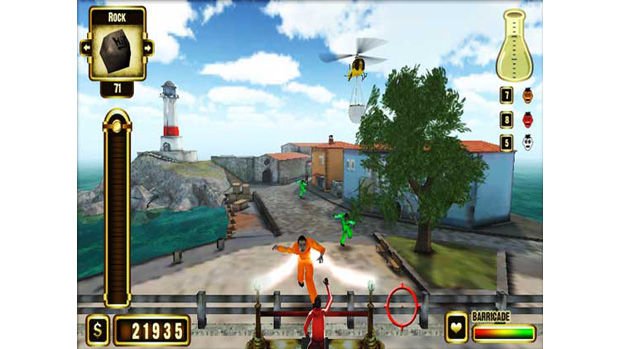 OK, this sucks. Now I have to actually talk about what happens in Zombii Attack. It’s like explaining a joke — hearing about how this game plays could ruin any chance of potentially experiencing what actual fleeting moments of fun it provides for yourself. If you’re also of the opinion that explaining a joke can ruin it, feel free to skip the next three paragraphs.

In Zombii Attack, an extremely troll-faced scientist asks you to go out and kill zombies with a giant slingshot. Sometimes he asks you to grab certain zombies and launch them into the air so that he can catch them in his helicopter. That’s the best way he knows to catch zombies — to set up a small barricade at random locations then ask a stranger to catch the approaching zombies and launch them into his randomly swerving helicopter.

You’ll need to kill the attacking zombies that are breaking down the wall at the bottom of the screen. The further you go into the game, the larger the levels get. At the start, I think the play field is probably 1/10 the size of the screen. At their largest, it’s maybe six times that size. Use the entire screen in the design of your videogame? That’s crazy talk, people. That’s not how we do things here in Zombii Attack. 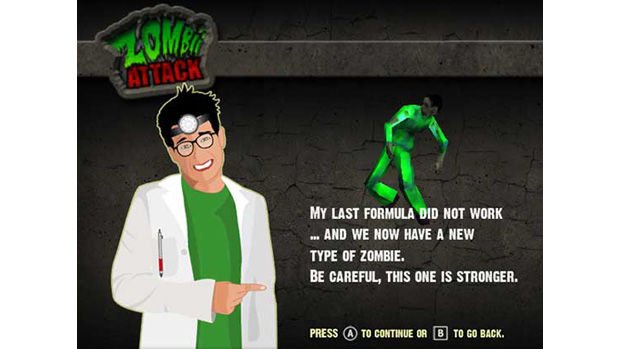 For the first three stages, you’ll defend your tiny wall from about three zombies at a time. The only weapons available to you at this time are rocks and anvils. Oh, and all the zombies wear blue jumpsuits (of course). By the end of the game, your wall will be as wide as the screen, and you’ll have the option to defend yourself with rolling zombie-seeking laser cannons and magical ankhs that can take out multiple zombies at once. Also, the zombies slowly start to wear different colored jumpsuits — white, yellow, and even purple are just a few of the jumpsuit types you’ll see in this surprisingly colorful title. After each level, you us money that you collected from killing zombies to stock up on weapons (rocks, ankhs, etc.). Then there are the insanely stupid, unexplained bonus levels that pop up every three stages or so where you run over zombies in a red sports car.

Not unlike Urban Champion, I found the extreme simplicity and constant opportunity for active cause and effect to be strangely enjoyable at times. Barely a second will go by in Zombii Attack where you’re not hitting a zombie in the head with something. It’s about as mindless as it gets, which isn’t that different from a lot of popular games today. The difference here is that Zombii Attack does nothing to try to disguise how stupid it is. 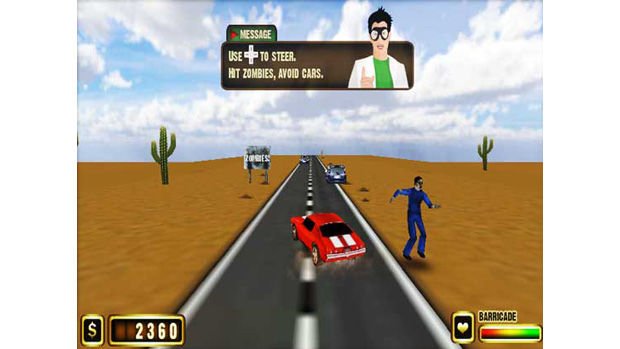 The game may be stupid, but you can’t be completely mindless when you play it. Some strategy is required here, as resource management is required in order to survive. You want you use cheap, weak ammo like rocks on the zombies with low HP (the ones in the blue jumpsuit), then you need to quickly select a more powerful, more expensive projectile (like a tire or a bowling ball) when a tougher orange-clad zombies show up, and so forth.

That’s mostly true of the levels around the middle, which have a pretty good mix of variously powerful weapons and zombies. The beginning of the game is much more flat, with just three or so types of weapons and basic zombies. The last few levels are surprisingly even more flat, as by that time you’ll have plenty of money to spend on the most powerful weapons, many of which can kill nearly every zombie on screen in one hit. 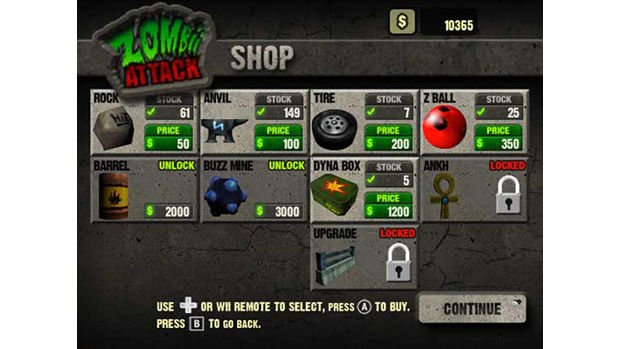 With the introduction of those weapons, Zombii Attack transforms into the most joyless videogame I have ever played. From there, you simply have to wait until enough of the specific zombies that the troll-faced Scientist wants you to collect show up so you can snatch them and launch them into the helicopter. All other enemies can be killed instantly, so unless you force yourself to not use the best tools that the game has to offer, there is essentially no difficulty left in the title from here on out.

That’s not to say that these weapons mean a guaranteed a victory. These last stages require you to launch certain zombies into the helicopter. These zombies appear at random, and if enough of them don’t show up in time, the helicopter will run out of gas and you’ll automatically lose the stage. If you win, you won’t feel like it’s because you played well, and if you lose, it won’t feel like it’s because you played poorly. You end up feeling like relatively passive bystander in a random game of chance. It’s at the point where Zombii Attack truly trolls the player. The game tells us that “We are the Walking Dead,” but instead of referring to Rick Grimes and his band of survivors, Zombii Attack is referring to the players who were compelled to play through the entire game, being transformed into mindless zombies themselves in the process. 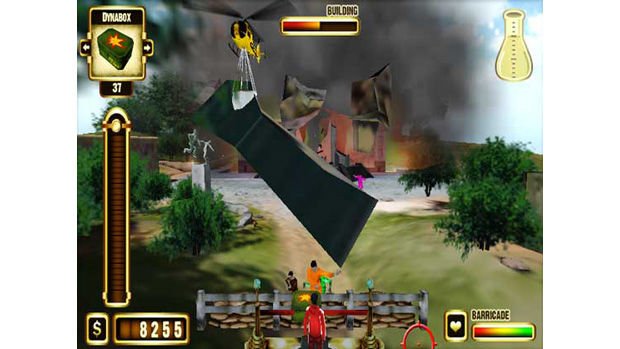 Now that I think about it, Zombii Attack almost feels like anti-videogame propaganda. Think of every negative description anyone has ever used for videogames (mindless wastes of time, brain-cell killers, contributors to the obesity epidemic in the United States or the low birth rate in Japan, a way to miss all opportunities for genuinely worthwhile experiences that life has to offer, a way to destroy any and all potential for productivity, etc.), and it’s probably an accurate description of Zombie Attack. The game did make me laugh a few times, and the middle bits did manage to hold my attention, but yikes, it sure does make gaming in general look like a completely awful pastime.

As a videogame, Zombii Attack is shit. As a parody of videogames, it has its moments. Either way, I’m not so sure it’s worth $5.