Yooka-Laylee and the Impossible Lair lays it all out in the title. This is another game that stars Yooka and Laylee, sure — that much is obvious. But, more crucially, attention should fixate on the Impossible Lair, the endgame challenge that is the impetus for literally everything in the game.

Every action in Yooka-Laylee and the Impossible Lair — all the platforming, collecting, secret-finding — is in service of preparing to tackle the Impossible Lair. It’s a death sentence for anyone who’s ill-equipped. Hell, it’s extremely trying for even the best Boy Scout. It’s a real [word that shouldn’t be printed in a review about innocent cartoon characters]. 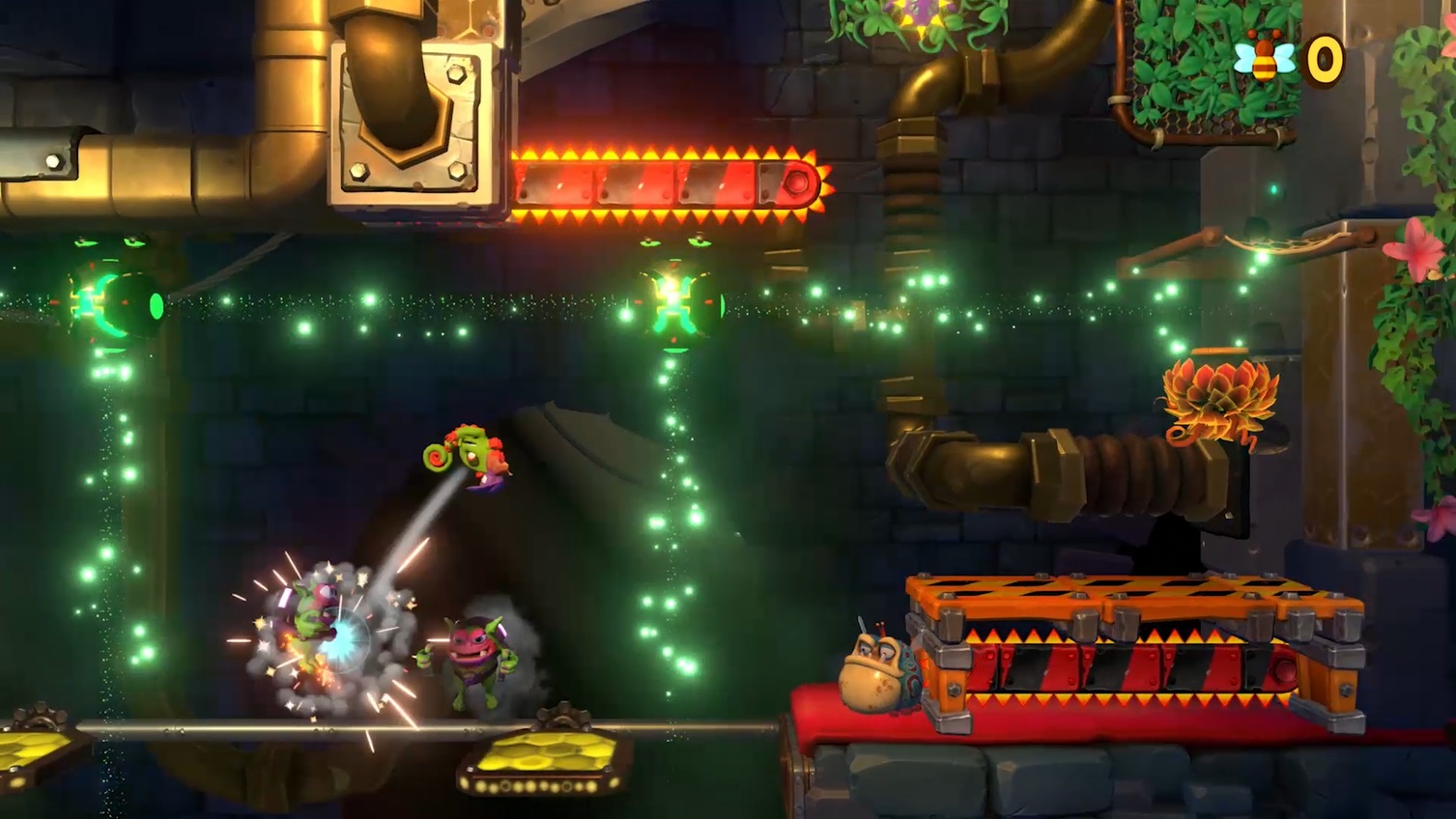 Impossible Lair is a direct continuation of the story told in the original Yooka-Laylee. Arch nemesis Capital B is up to more evil corporate shenanigans, this time enslaving the bee population with a device called the Hive Mind. (Impossible Lair never shies away from a pun, but didn’t go so far as to recruit Sting for the soundtrack.) These pollinating plot devices can be freed one-by-one — one rewarded for every level finished — but the ultimate goal is to wrestle the Hive Mind away from the big bad bee.

The opening minutes are a taste of what’s to eventually come. Dropped into the Impossible Lair, Yooka and Laylee are doomed to fail, although success is technically possible. Tasked with immediately taking on the final boss, they’re quickly bested. It’s inevitable. They don’t necessarily need more firepower, but they need more defenses.

That’s where the bees come in. Every bee that’s saved contributes one extra health point during the Impossible Lair. Our anthropomorphic duo sets off to clear a stretch of 20 levels for the explicit purpose of building a bee shield. It isn’t an elegant narrative, but no one thought it would be(e).

Yooka-Laylee and the Impossible Lair has middle-of-the-road platforming chops, not tight enough to stand out as something special but not loose enough to qualify as a shortcoming. The 2D sidescrolling levels rely on a potpourri of genre tropes to stitch together a competent platformer. It’s all here — spikes, conveyor belts, slippery ice, swimming sections, cannons, etc.

Maybe it’s not innovative but it works. Developer Playtonic has crafted a collection of stages that are thematically coherent, lengthy, slightly more challenging than expected, and packed with well-hidden secrets. It’s not exceptional but it’s good enough. There’s a genuine sense of accomplishment when finishing a level, and that’s something.

However, Impossible Lair‘s brightest moments come between levels when traversing the overworld. Here, Playtonic is afforded the opportunity to lean into Yooka-Laylee‘s adventure and puzzle-solving sensibilities. The land is rife with mysteries to unravel. Sometimes it’s in pursuit of more tonics that alter gameplay in the 2D levels (more checkpoints, a sonar blast that shows secret areas, visual filters — stuff like that). Sometimes it’s merely to connect the map and reveal shortcuts. 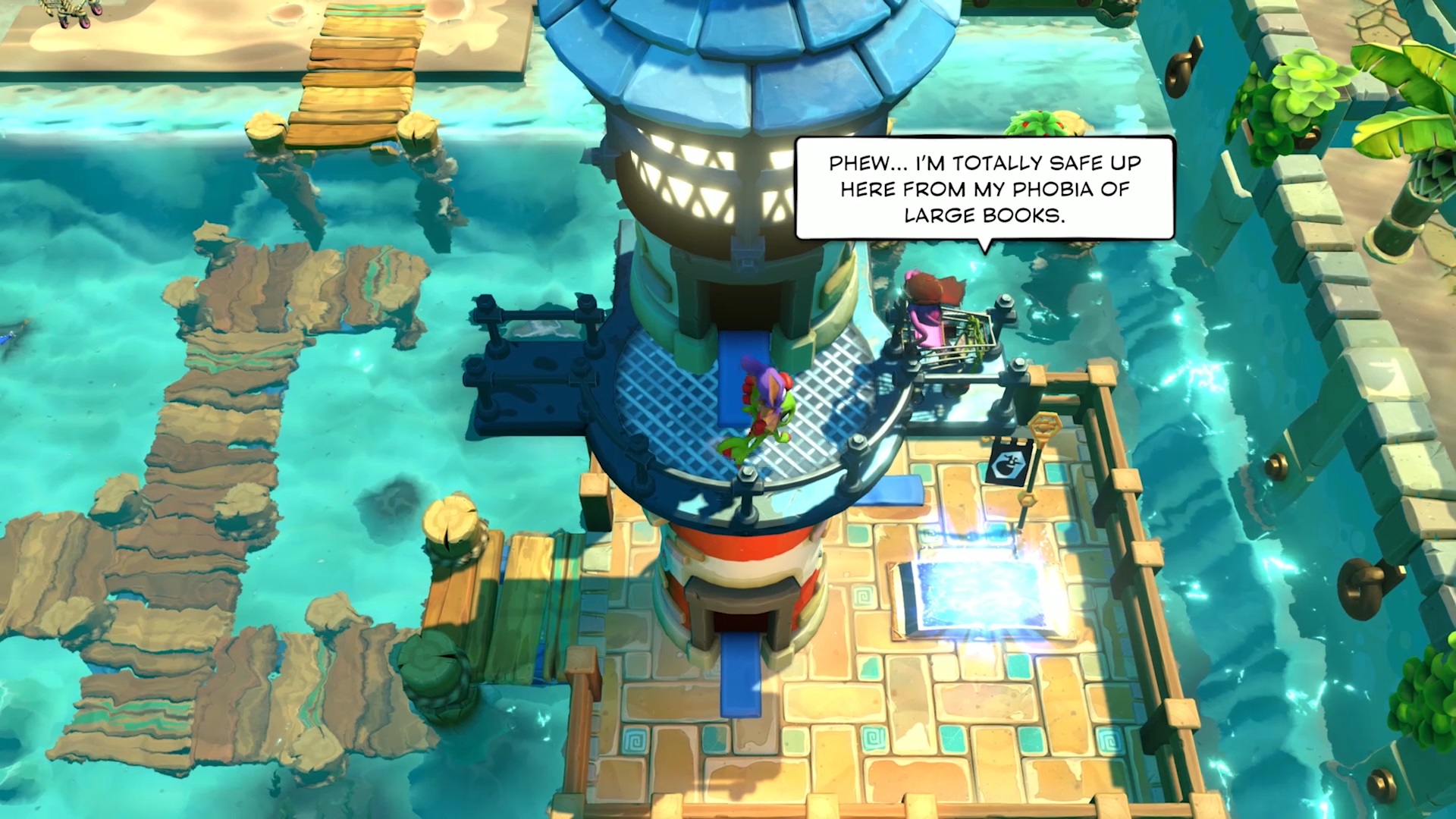 Most of the time though, it’s to remix existing levels. Impossible Lair shares a parallel with Yooka-Laylee. The original allowed players to expand the stages, essentially doubling their size. Impossible Lair twists that concept by manipulating the overworld to alter the physical makeup of each stage. For instance, a sandy beachside level becomes a water level when you figure out how to make the ocean tide flood it.

It’s a clever and narratively-consistent way for Impossible Lair to effectively turn its 20 levels into 40 levels. These new stages always introduce some sort of environmental factor that differentiates it from the original. Most important, replaying it all doesn’t feel like a chore. Everything changes enough that they’re nearly brand new levels.

Again, all of this is optional. It only exists to create a bigger and bigger safety net for whenever you want to attempt the Impossible Lair. There are 48 bees to collect — 40 for playing through each level, and another 8 tucked away as secrets. I finally went into the Impossible Lair with 44 bees. It didn’t go well. 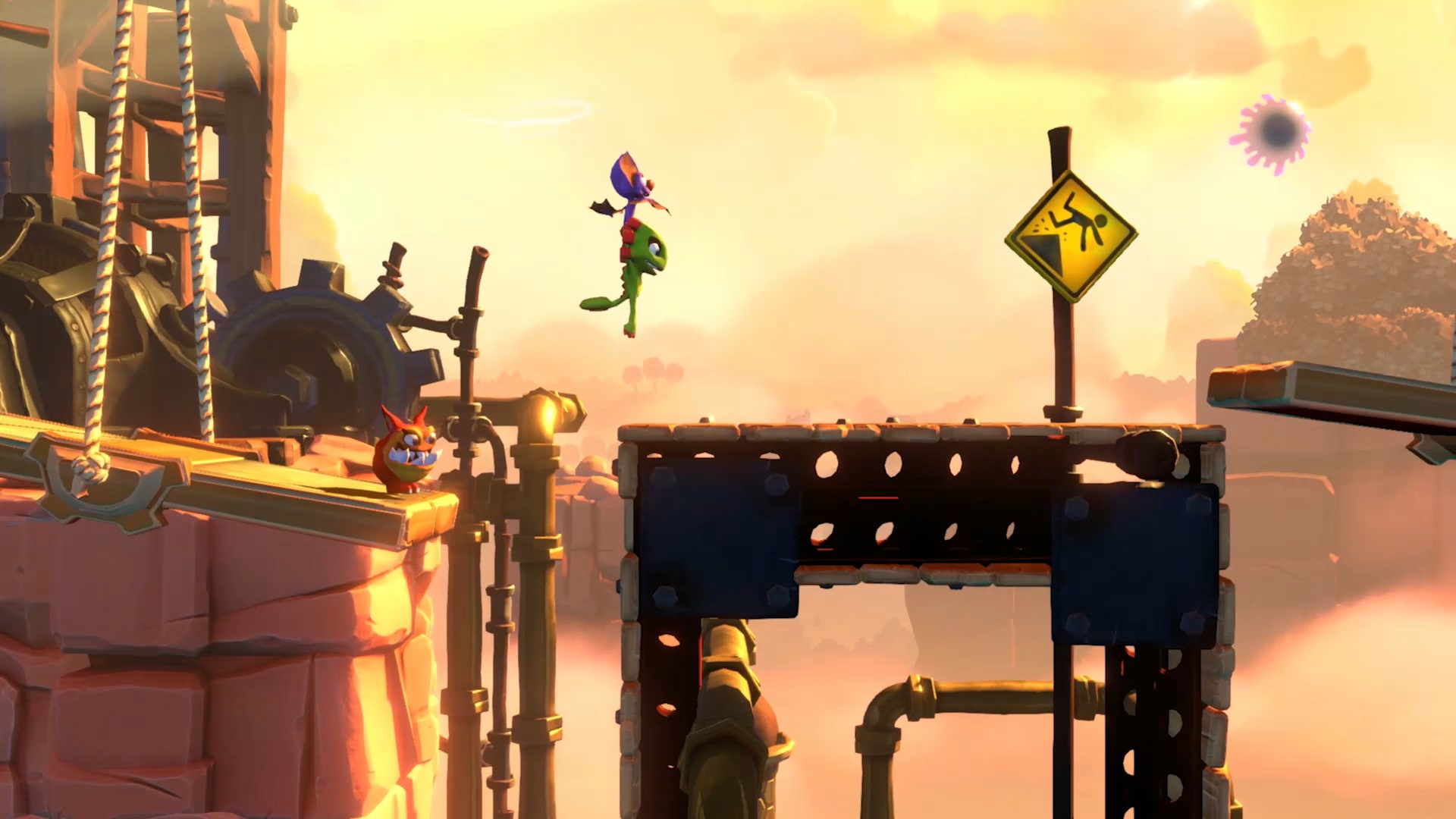 The Impossible Lair lives up to its billing. This gauntlet switches back and forth between boss encounters and long platforming sections, all of it dangerous and exhausting. There are no checkpoints and a successful run takes approximately 15 minutes. Having 40-some health points sounds like a lot — truthfully, it really is a lot — but the difficulty curve spikes so dramatically that it’s anything but comfortable. After 20 or so attempts, I finally cleared the Impossible Lair with no health points to spare.

A ho-hum platformer with worthwhile puzzle implementation suddenly morphs into something much more challenging, something that absolutely requires skill. It’s a jarring transition. The entire time, Yooka-Laylee and the Impossible Lair tells you this is going to be tough, and then it makes good on that promise in the most merciless way — all in a game that is mostly accessible up until that point. It’s equal parts admirable and confounding.

Yooka-Laylee and the Impossible Lair neatly captures the essence of Yooka-Laylee and reimagines it as a new type of game. It’s a distillation and a simplification, but it’s effective. Then, as its grand finale — a necessary conclusion that looms over the whole game — it turns uncharacteristically punitive. It’s rewarding, that much is undeniable. But it also leaves you feeling like all those hours spent beekeeping never really prepared you for the final challenge. Those bees just afford more leeway over the course of a very long struggle. It’s kind of a buzzkill.