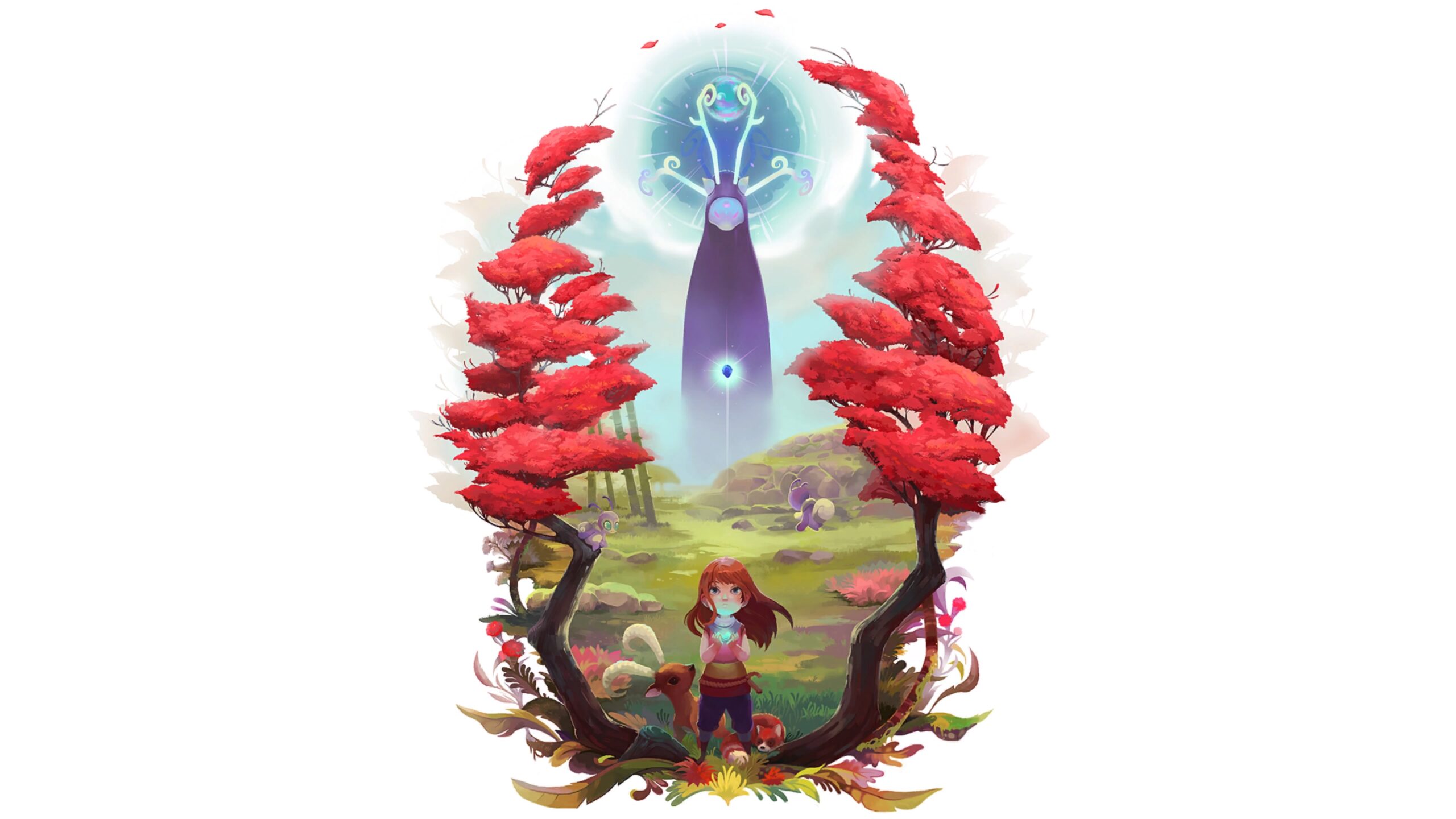 Yonder: The Cloud Catcher Chronicles is a game that I’ve been highly interested in ever since it was first announced. It looked like something that was right up my alley, given its utterly adorable art style and the fact that it quite clearly took liberal cues from franchises such as The Legend of Zelda and Harvest Moon.

When I got a chance to preview the game back in May, I noted that while my initial impressions were highly positive, I couldn’t help but wonder how it’d fare in the long-run. Now that I’ve had plenty of time with the finished retail version of the game, I’m pleased to say that I’m still just as fond of it as I was back then. 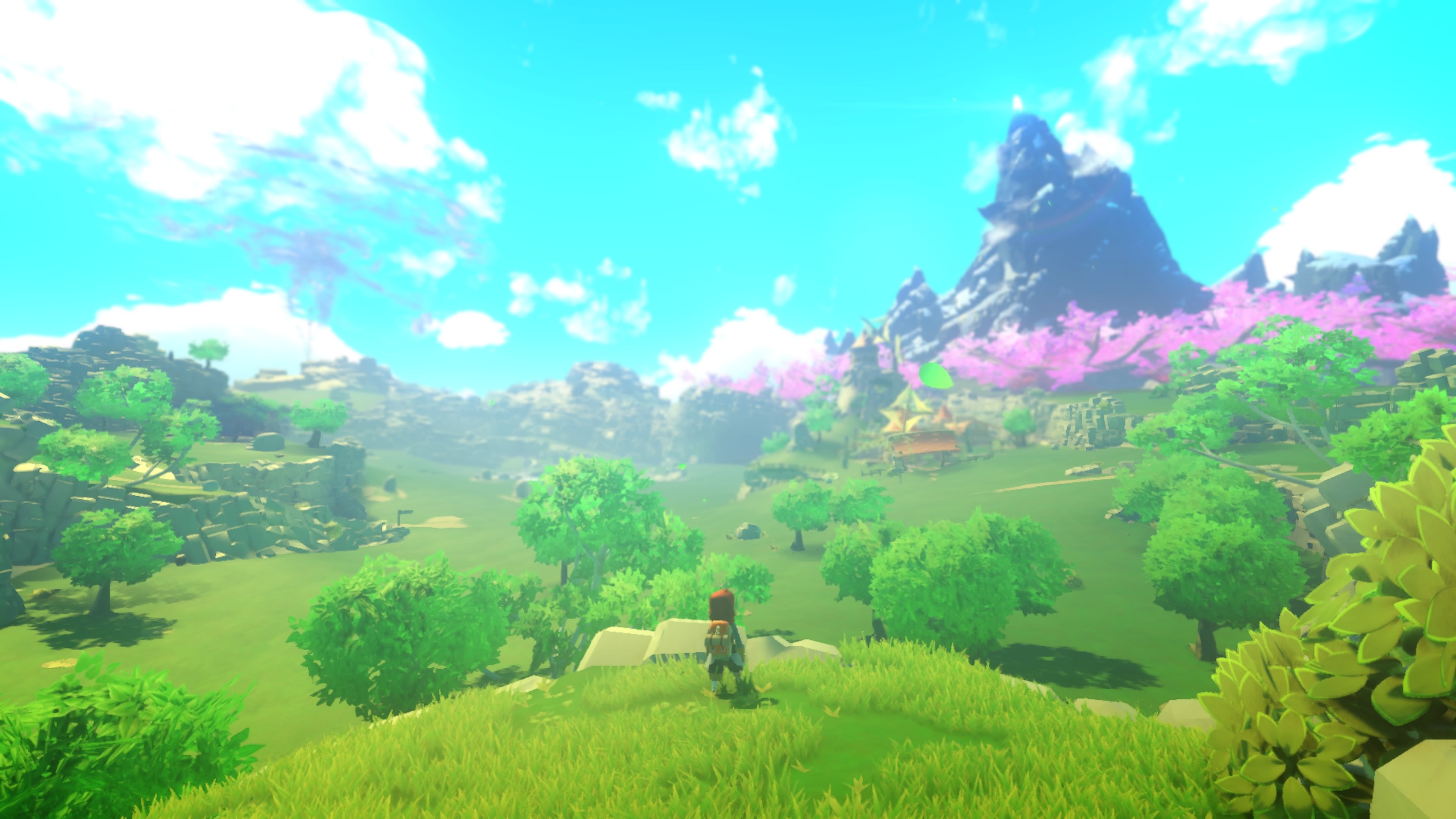 Yonder’s basic premise is a relatively simple affair. The game sets you in the role of a player-created character who, after being sent away from the island of Gemea for a number of years, return to the land at the behest of a relative. On your journey home, a terrible storm leaves you shipwrecked on the island. You soon discover that Gemea and its benevolent inhabitants are now being terrorised by a mysterious and malevolent purple haze referred to as the Murk.

By aiding the citizens of Gemea, and by utilising the power of beings known as Sprites, you can slowly dispel the Murk and aid the island’s citizenry in order to restore the land to its former glory. Does my brief rundown of the game’s story and setup sound a little barebones? There’s a good reason for that; Yonder itself doesn’t treat its narrative as a main point of focus. Instead of putting a significant emphasis on story and characterisation, the game treats its plot as a means of guiding the player around the island of Gemea, and as a way to steadily introduce them to its mechanics. Due to this, Yonder’s campaign only consists of a small handful of quests, and not much else.

That’s not to say that there aren’t any character revelations or plot details that get uncovered along the way — far from it — but these details will likely already be figured out by any player who has bothered to read the various journals scattered throughout the island. There are still good reasons to play through the story — a couple of locales as well as one of the game’s Guilds require a little bit of plot progression — but it is in no way Yonder’s focal point. 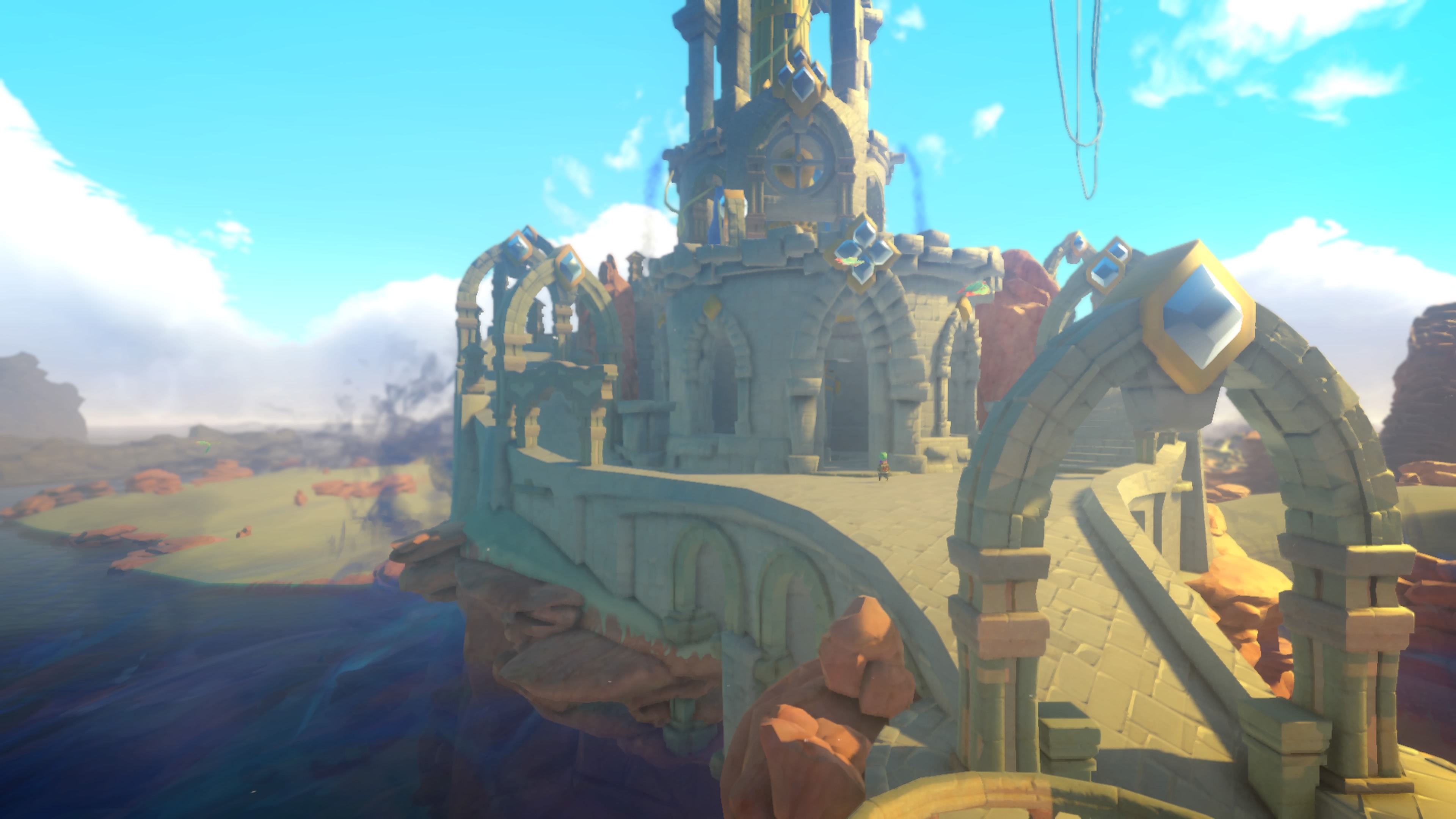 If it wasn’t already evident, Yonder’s story didn’t exactly resonate with me all that much. That’s not to say that it’s inherently awful — it does serve its purpose of steadily introducing players to new locales and mechanics quite admirably — but I found it to be a little threadbare. Thankfully, Yonder more than compensates for its lacklustre narrative with its gameplay and with Gemea, itself.

It wasn’t long after firing up my review copy of Yonder for the first time that I found myself straying from the beaten path and throwing its narrative by the wayside in order to explore the rather sizable open environment of Gemea on my own. I spent hours upon hours of my time aiding the citizens that I came across, hunting for collectables such as cats (which are needed for a crazy cat lady-themed quest) and Sprites (which allow you to dispel Murk), discovering farmland to cultivate using Yonder’s Harvest Moon-like farming system, as well as gathering resources for trading and for crafting.

By doing this — by simply letting myself wander the island on my own, and by chasing after every shiny thing that I came across — I found myself increasingly appreciative of the world that the developers had crafted as time went on. Gemea may be vastly smaller in scale than the environments found in many other open world games on the market, but it’s incredibly well-realised nonetheless. Many of its individual biomes and locales seamlessly flow from one another without feeling particularly jarring, and there’s an absolute plethora of secrets and hidden areas to uncover.

One thing that I appreciated was that the developers have put in a fair amount of effort to incentivise players to check out everything that the game has to offer. Many of the shortcuts found throughout Gemea can only be made accessible by either dispelling Murk — which requires players to go out of their way to hunt for Sprites — or by constructing bridges to cross various rivers and streams. A sizable number of these bridges, incidentally, require materials that are most readily obtainable via the game’s crafting system, with recipes that are unlockable by joining one of the Guilds that are located throughout Gemea.

This may sound convoluted, but in practice, I found it to be a highly effective way of making me want to check out more of Yonder’s systems and mechanics. The other benefit to this is that it also allows the game to convey to the player the idea that they’re making a genuine improvement to the island as a whole, as their efforts to aid Gemea can yield a tangible and permanent gameplay benefit. 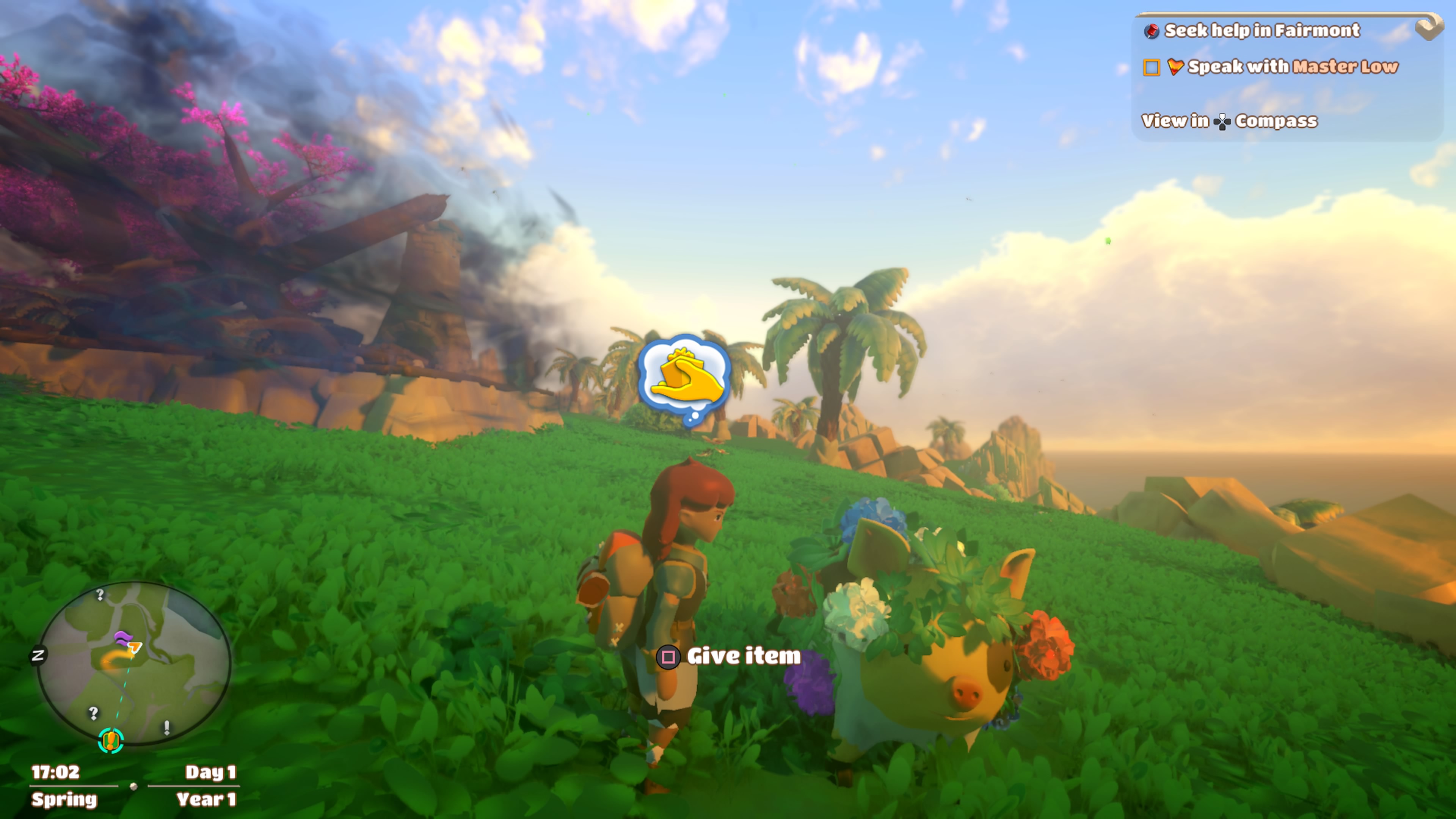 In the introduction to this review, I alluded to the fact that I was absolutely enamoured with Yonder’s visual style. It may not be the most technically impressive title ever produced, but Prideful Sloth managed to create an art style for this game that’s bright and cartoony (and very clearly inspired by The Wind Waker), and that suits the lighthearted tone of the game exceptionally well.

Said art style has the added benefit of being exceptionally cute. Throughout much of my time with the game, I constantly ran into moments or instances that’d lead to me sporting a dumb and cheesy grin on my face — be it a line of dialogue, a silly pun, or a first encounter with some of Gemea’s native wildlife. Simply put, this game absolutely exudes cuteness.

Speaking of Gemea’s wildlife, I found it interesting that many of the animals on the island consists of amalgamations of multiple real-world creatures, be it a combination of a dog and a bear, or a wombat/squirrel hybrid. They may be simplistic on a conceptual level, but they fit in quite nicely with the game’s world. The only downside is that there just aren’t all that many species of animal to discover — just nine in total — but given that this is a budget-priced title by a rather small indie studio, this is but a minor nitpick made by a person who’d love to see what other creature designs could exist within the confines of the game.

I have a weakness for cute things, as it were. 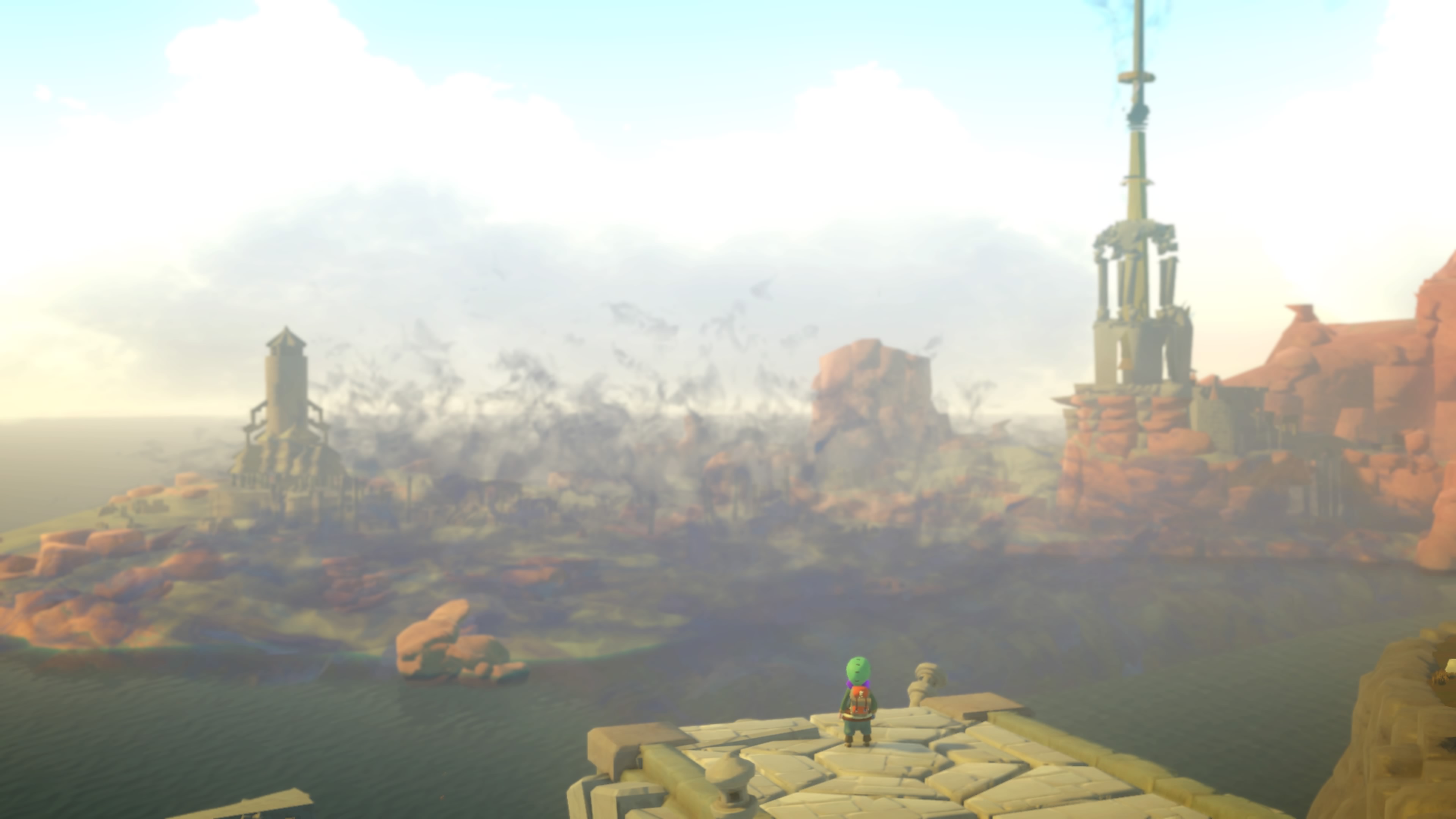 Unfortunately, the Murk isn’t the only malevolent force terrorising the poor inhabitants of Gemea. Simply put, I rarely got the feeling that performance is as consistent as it could have — and should have — been. Throughout much of the game’s runtime, I found that it would often struggle to hit a stable framerate. Though these frequent dips in performance aren’t severe enough to render Yonder unplayable — its slower pace, coupled with the fact that such drops in performance are consistent, but relatively minimal, leads to the game still being adequately responsive — they nonetheless have an adverse impact on the overall feel of the title.

To further exacerbate the PS4 version of Yonder’s performance problems, I noticed that on occasion, the game will completely pause momentarily. Despite the irregularity of this issue, it still occurred frequently enough to warrant a mention, as it made me briefly panic about the prospect of the game crashing on me every time I ran into it.

There is some good news, however, in that the developers have been releasing updates to the game in order to address some of these concerns. Yonder’s performance on the PlayStation 4 might not be completely solid as of the time of writing, but such post-launch support does at least give me hope that perhaps these issues can be further ironed out in due time.

On the technical side of things, these performance issues represent the bulk of Yonder’s shortcomings, although that’s not to say that the game is otherwise completely solid. While I didn’t run into anything game-breaking, there are a few moments where Yonder feels as if it’s lacking in polish. These quirks mostly boiled down to a couple of objects lacking any form of collision detection, as well as a bizarre instance where two story missions had their associated trophies swapped. Although these minor quirks didn’t adversely impact the overall experience, they nonetheless led to the game feeling as if it could have had a bit more polish. 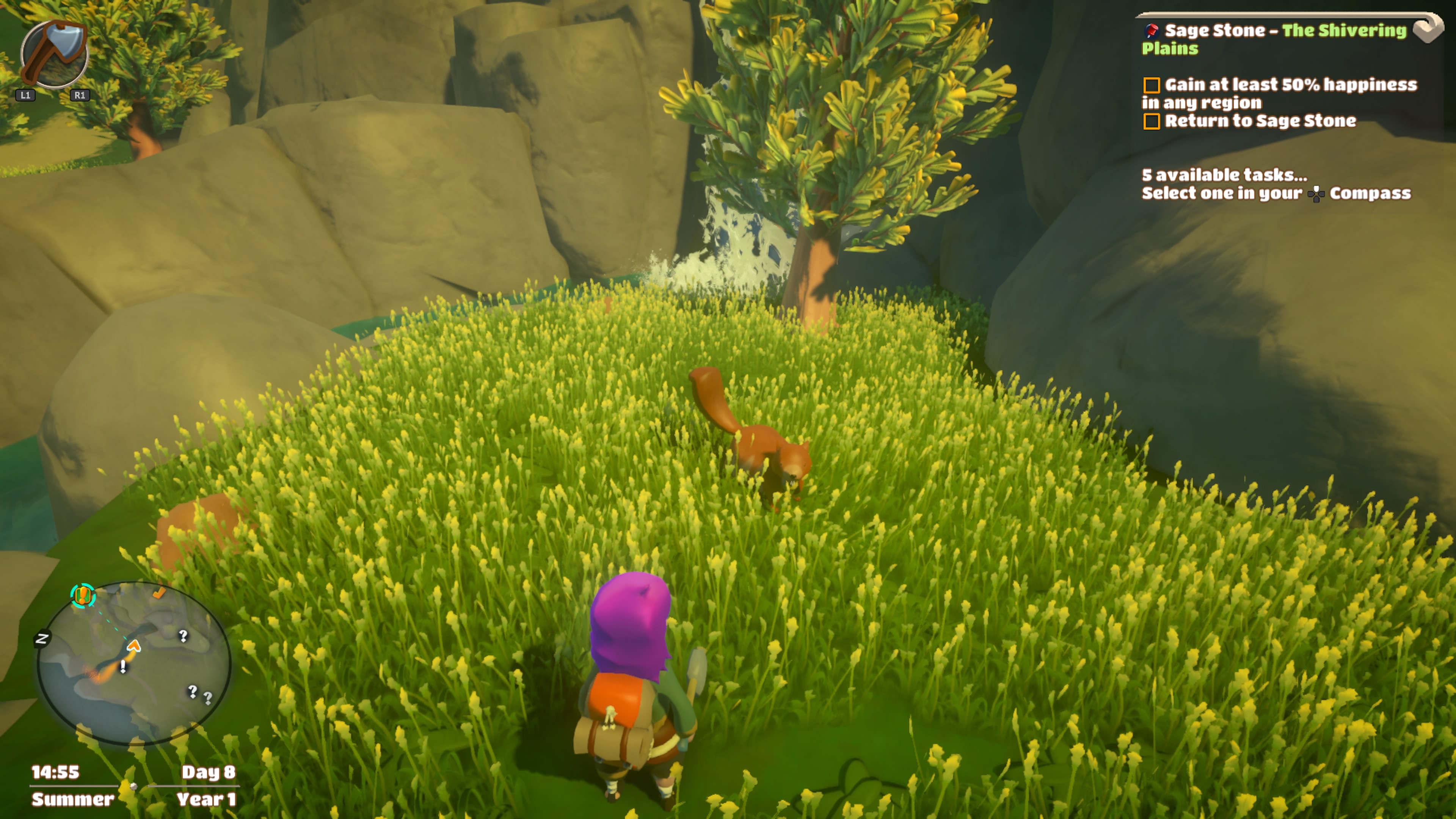 Yonder: The Cloud Catcher Chronicles is undoubtedly one of the cutest and most welcoming games that I’ve played in a long while. Sure, the experience may be slightly marred by a handful of minor faults, but Yonder more than compensates for these issues with its beautifully realised world and its enjoyably lighthearted tone.

Sometimes, you really do just need a laid-back game that drops any semblance of agency or emergency and instead allows you to simply explore everything that it has to offer at your own leisure — something that you can easily unwind with, or a title that’s just relaxing and inviting. Yonder fulfills this purpose wonderfully, and I can see myself revisiting it time and time again just so I can get lost in its world once more.

[This review is based on a retail build of the game provided by the publisher. As a matter of disclosure, the public relations firm representing Prideful Sloth (Stride PR) employs two former Destructoid staff members – Kyle MacGregor and Zack Furniss. The reviewer has never worked with the former, but has worked with the latter during his tenure at Destructoid. As always, no relationships were factored into this review.]