Windbound isn’t the sailing-focused spin on Zelda: Breath of the Wild that some trailers suggested, but it’s not entirely removed from those comparisons, either. Its best asset is its sense of adventure.

As Kara, a shipwrecked warrior, you’ll hunt for resources, craft tools like a bow and a glider, and try your best to work with – not against – the wind to explore procedurally-generated archipelago world maps.

I adore that premise, and if you’re into the sound of a boat game that’s about sailing instead of combat, you’ll like it too. I just wish some of the edges weren’t so rough and the structure felt more engaging. 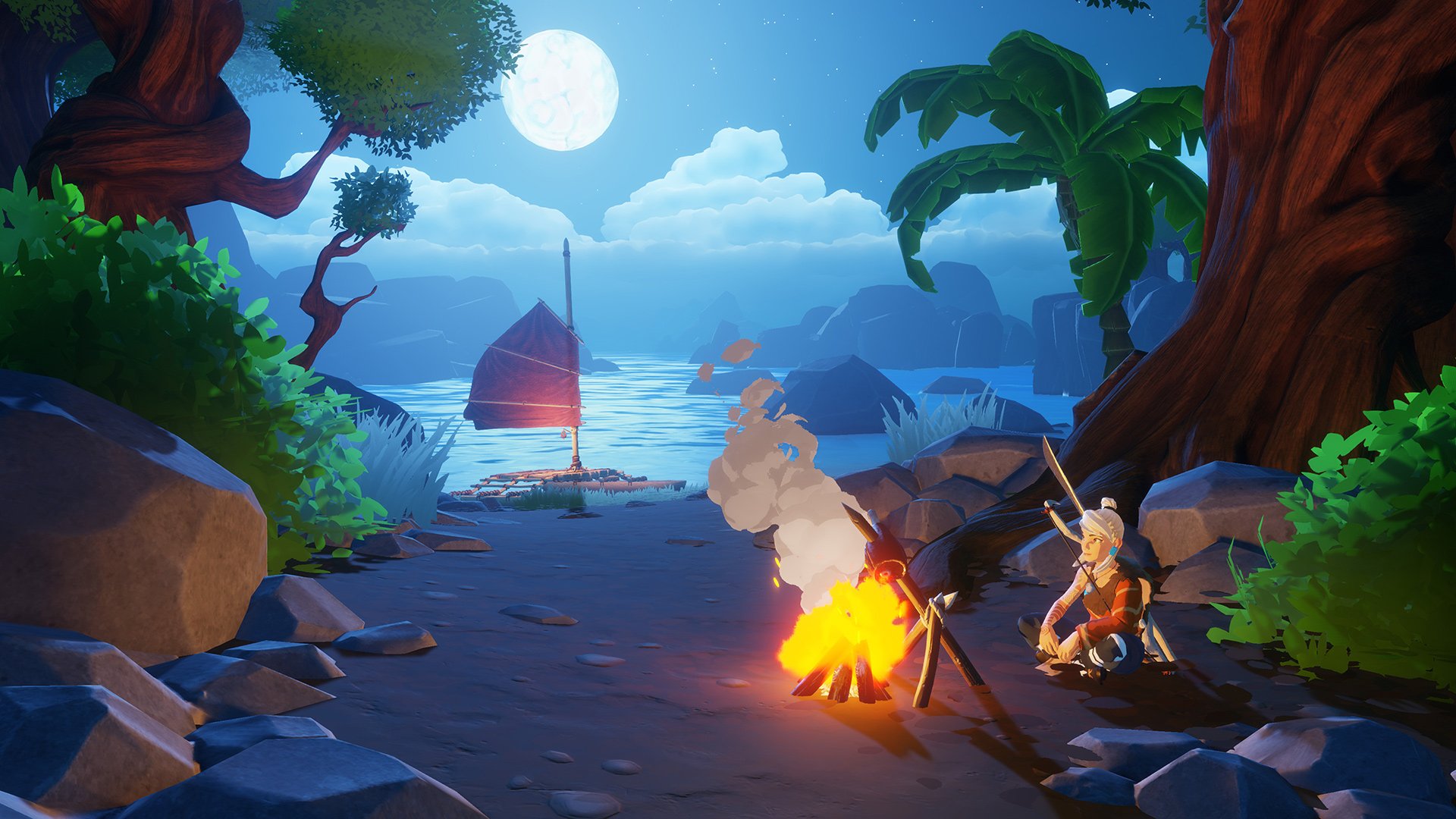 I didn’t quite know what I was getting into with Windbound, so that point about the format is worth stressing upfront. This an action-adventure roguelike, which may be a deal-breaker for some of you.

Windbound is split up into five chapters, each of which plays out essentially the same way. You’ll begin with a circular grayed-out map that you can fill in by sailing around, and along the way – assuming you don’t get too side-tracked by optional islands that might bring new crafting possibilities – you’ll need to locate three towers, scale them, and activate them. From there, you can head to the map’s lone (but hard-to-miss) shrine, teleport to a recurring dreamlike space for a bit of Journey-style storytelling, and ride some massive waves in a sort of linear trial before you’re whisked away to the next chapter.

Each chapter is functionally the same, except the map sizes grow larger, the islands start to look and feel more distinct, and the creatures become a bit more threatening, though combat never seems like Windbound‘s priority. With that said, definitely play on Storyteller difficulty, not Survivalist – the latter will kick you back to Chapter 1 if you die and you’ll lose a big chunk of your inventory. Meanwhile, Storyteller lets you retain all items and try again on the current chapter. One death was plenty for me.

You can go as fast or slow as you like, which I liked, but you’ll contend with a hunger-based penalty to your stamina bar if you aren’t diligent. The good news: you can cook food on your boat (assuming you bulk it up to fit more items, which you’re never forced to). The bad news: cooking meat is super slow.

While certain videos paint a grand picture, in practice, there’s a lot of repetition – for better and for worse. I never felt truly lost in Windbound, not even for a second, but with such a rote structure to follow on the critical story path, my discoveries stopped feeling personally meaningful after a while.

It was cool to find a recipe for a magical bow or investigate hard-to-make-out rock formations way out there for shards to upgrade Kara’s passive abilities. It was less cool to semi-mindlessly stab the same old beasts on the same old islands to stock up my food reserves. The initial exhilaration wore off quickly.

I dig almost everything to do with sailing in Windbound, from building my boat up bit by bit, to adjusting sails to mesh with the ever-shifting winds, to seeing a hazy far-off island come into focus, but dang, I do not care for the melee combat, dodge-rolls, or on-foot movement. Those elements are all passable. And despite the existence of a fun glider, verticality ends up being a non-factor. You won’t climb much at all.

I finished the game feeling like the trailers showed a snippet of almost everything there is to do. 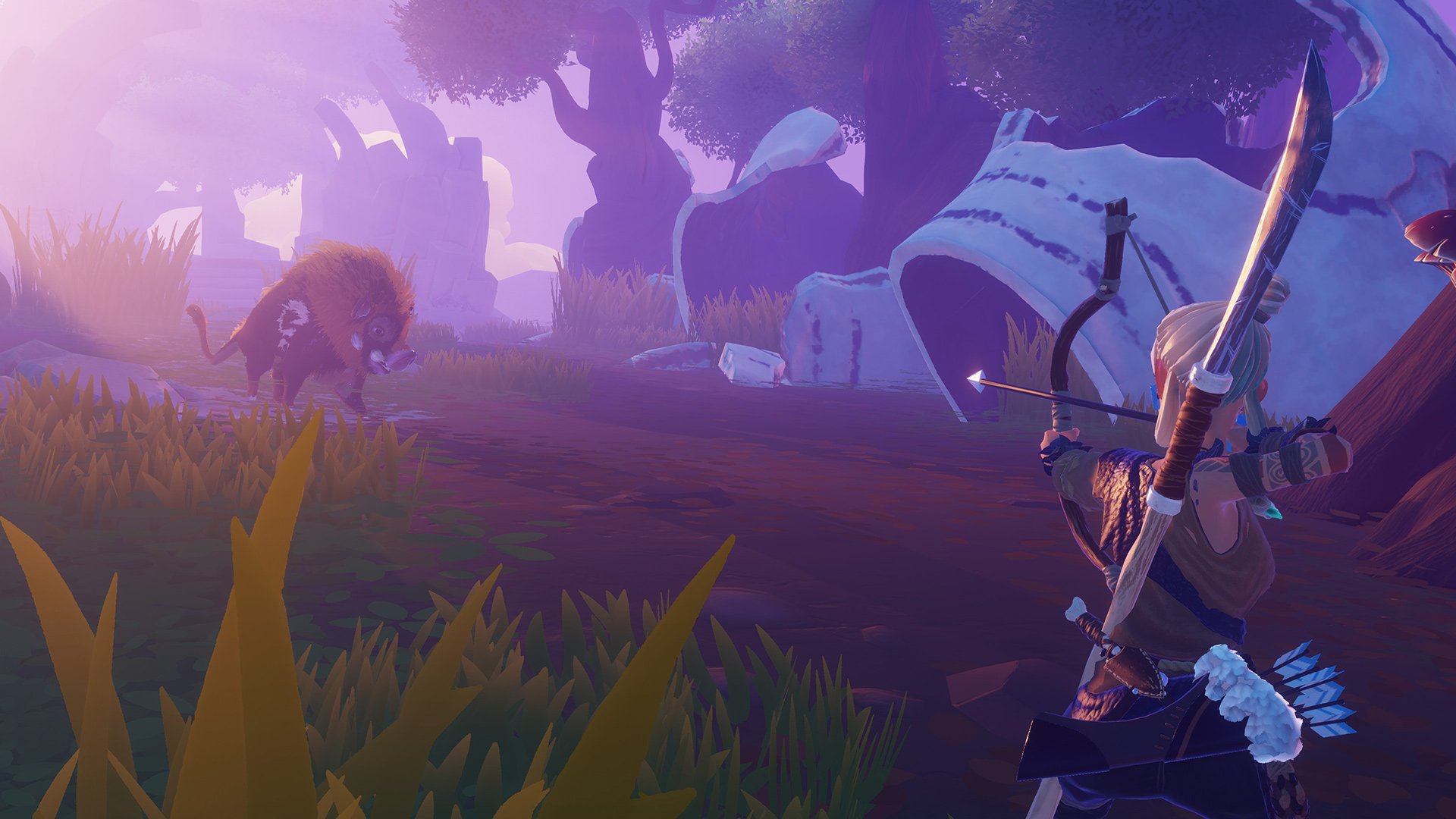 The highs – especially the use of bold colors and memorable Zelda-nodding tracks – are pretty high, to the point where I was able to tolerate the budget-constrained mechanics and design choices.

I had a decent time. With patience – and with appropriate expectations – some of you will too.

From a distance, Windbound is a gorgeous oceanic adventure with a fun sailing system that isn’t afraid to push back, but up close, the cracks start to show. The game makes a great first impression that ultimately wears thin by the time you’ve mastered its repetitive resource-gathering roguelike loop.

Even if the story failed to resonate, I’m sure I’ll pick this up again just to aimlessly sail around.