A quiet Hyrule was just the escape I needed

These days, my mental health has been on the rocks. There’s a myriad of factors involved, the pandemic being the most obvious contender, and I’m sure most people out there have been feeling something similar.

When the lockdown started last year it was obviously stressful, but my personal silver lining was that I was going to catch up on all of the media I hadn’t otherwise had the time for. Every game, every book, every show became a respite when seemingly every part of my life — from my work to my relationships to my religious identity — were all exploding.

But after a while though, the effects of my escapism began to lose their potency. Playing games felt like a chore, and any time I put on a show I found my mind wandering back to my stressors instead. Social media became the only thing that could hold my attention, but the constant bombardment of information became too much for me.

My anxiety had fully taken over, and the distractions I usually deployed to cheer me up suddenly all blurred into noise in my head. I knew I was in trouble when I had no interest in watching Tangled, my comfort movie to end all comfort movies. I was burned out not only on work, but on my favorite media too, and that is not a good feeling. 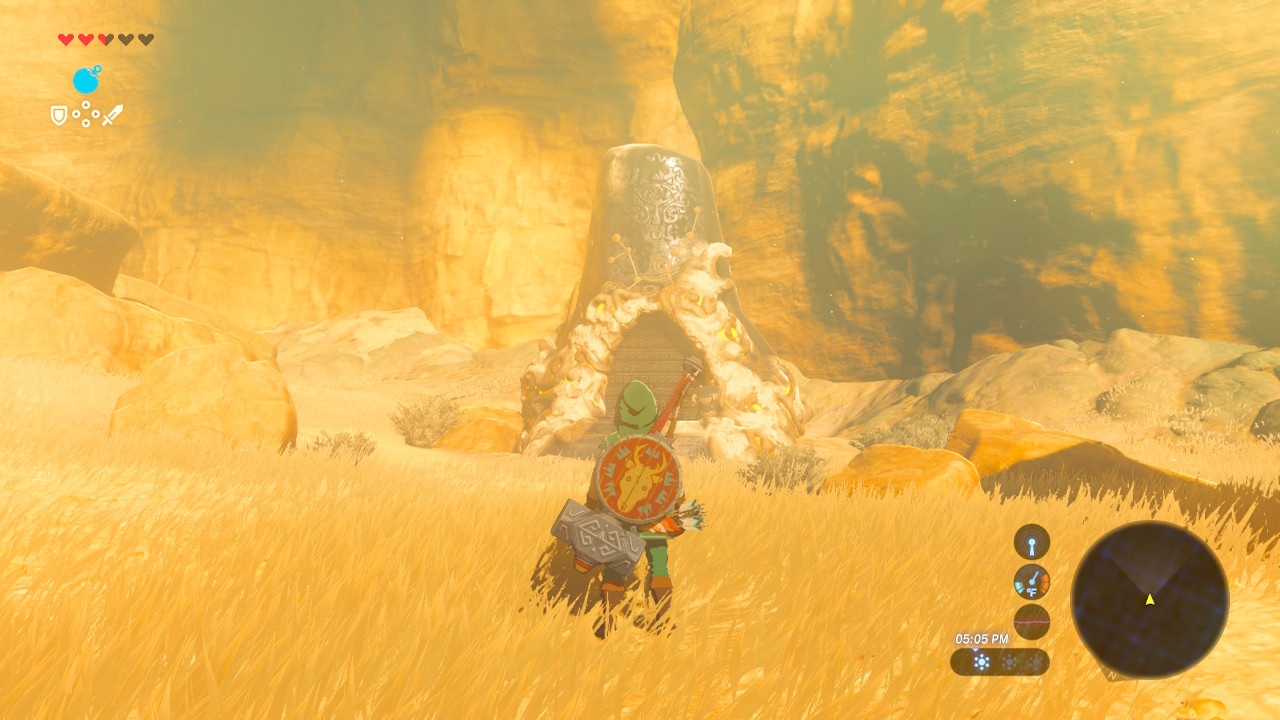 Through it all, though, there was one thing that I kept coming back to in my head. I was craving a replay of one of my favorite games of all time — The Legend of Zelda: Breath of the Wild.

I played it for the first time when I was in college, and decided the perfect time to pick it up was during finals week in the spring of my junior year. I was playing that game for fourteen hours a day when I was supposed to be studying. My first playthrough was pretty much a straight shot that ended up being over 100 hours long, and I dropped it on my “favorite games of all time” list and called it a day.

So a few weeks ago, almost five years after my first playthrough, I finally decided to sit down and start a new save file.

Immediately after booting it up, I knew my gut was right — this is exactly what I needed right now. I know this sounds so cheesy, but coming back to this game felt like coming home again. There’s something so comforting and relaxing about it; part of me wonders if that’s because the ambient animal and bug sounds remind me a lot of where I grew up in the Southeastern United States.

All of the towns in the game have their own distinct feeling, and each of them feels so cozy, like a real place I’d want to hunker down in for the night. I’ve heard people say Breath of the Wild‘s version of Hyrule feels too empty, but I just can’t see it. Every NPC, every enemy, every place you go just feels so chalked full of personality, half the fun is just being there. 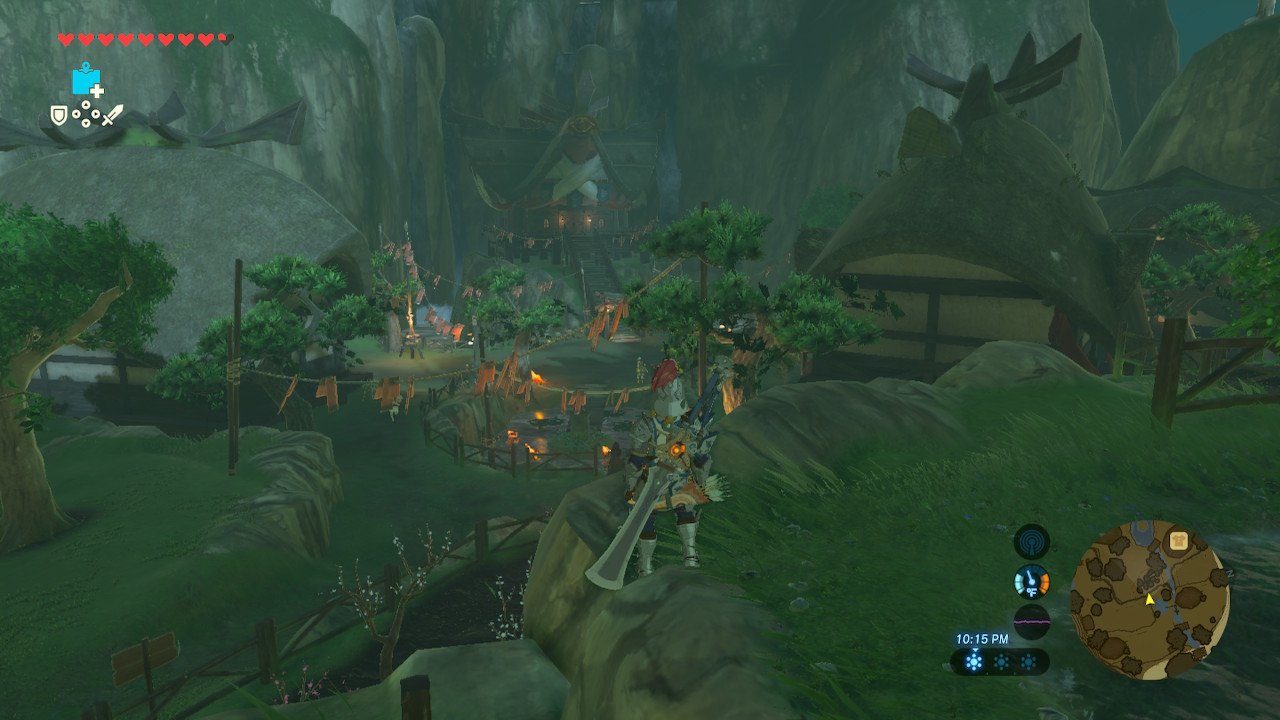 I find that this version of Hyrule is exactly my taste not just because it’s a fantasy world with magic and monsters, but because so much of what you encounter is just seeing how the people of Hyrule have dealt with the aftermath of the battle that they lost. There’s a complexity there that I think is really somber and beautiful. A world in ruins is one of my favorite fantasy tropes, and this game scratches that itch for me. Everything is so empty and peaceful, and at the same time hints at the history of what happened before.

With where we are in the pandemic, we’re still trying to fight an active threat, but also trying to grieve and move past all of the tragedy that’s already passed. I think one of the reasons Breath of the Wild‘s world feels so comforting to me right now is because it’s a safe, fictional space to process those exact same feelings.

Calamity Ganon looming over a devastated, yet rebirthed Hyrule feels more apt and relevant than ever. 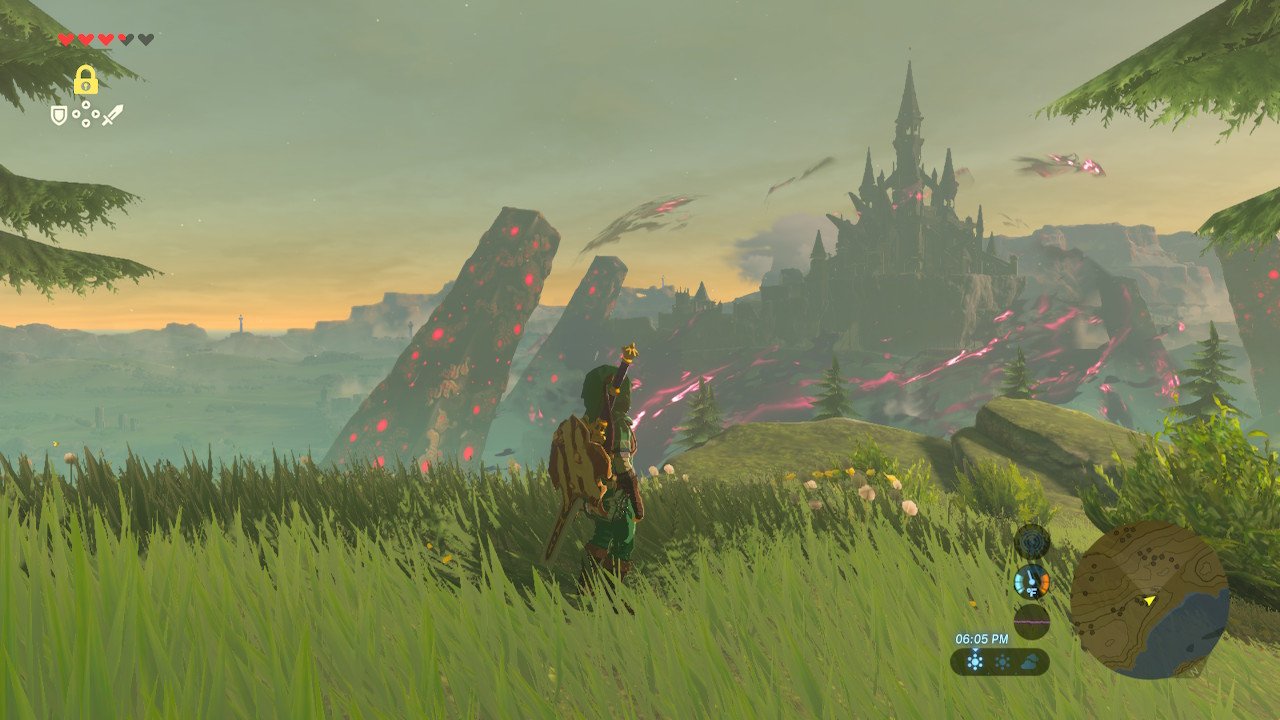 When it comes to the gameplay itself, I always knew this game was a masterpiece (hence it being one of my favorites of all time), but playing it now that I’ve had some development experience makes me see it in a whole new light. I feel like I can appreciate the brilliance of the design much more now.

I think why Breath of the Wild‘s game design is so relaxing is because of its lack of structure. When a lot of games don’t seem to trust me to even get to a waypoint on my own, this is a refreshing change of pace. There are a few mandatory objectives you have to complete to progress in Breath of the Wild, but other than that you can go anywhere and do anything you want, any time you want. 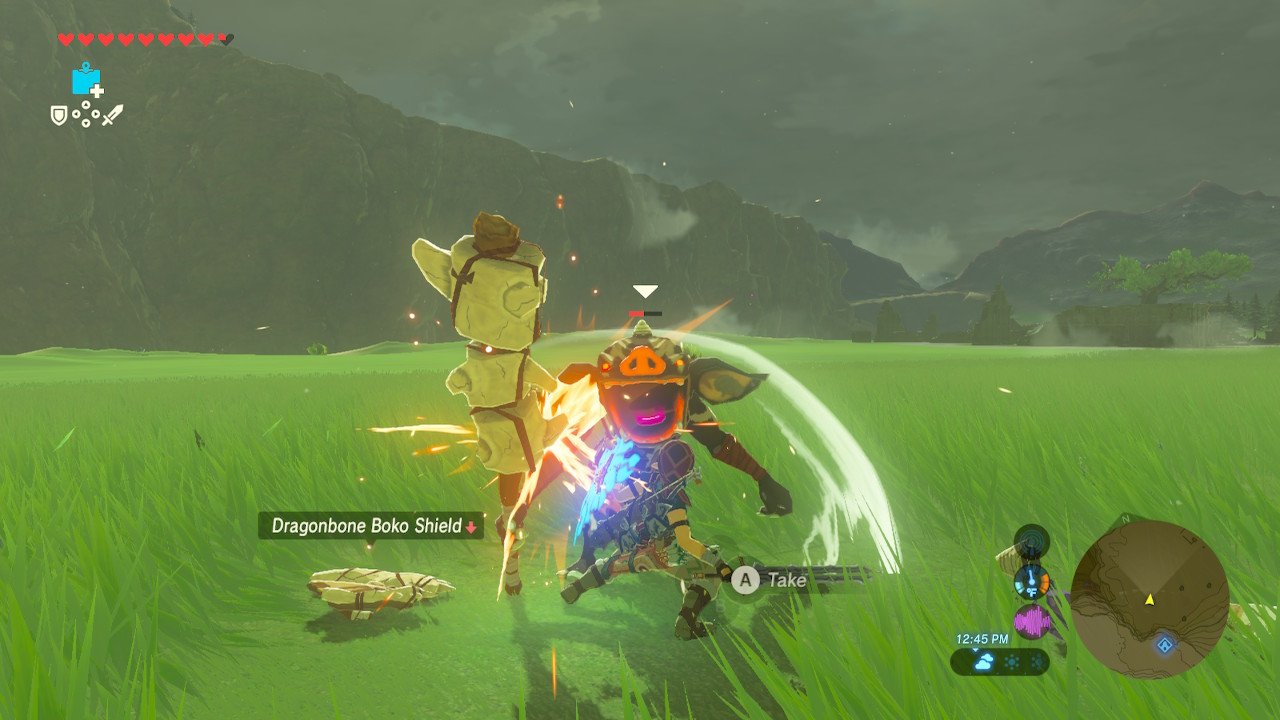 It’s almost a sandbox game in the sense that you’re just kind of thrown out into the world with no guard rails, and you can use your inventory, runes, and the Champions’ Blessings to solve a problem in any manner you want. That’s extremely freeing, and really makes you feel smart when you figure something out in an unconventional way.

I was recently talking about Breath of the Wild with a friend, and he likened the experience to a stream of consciousness. I have to agree here. Never when I’m playing this game am I bumping up against the edges of the game design in a way that reveals it to me. Instead, I get to just wander around as I please, and stuff just pops out at me, begging to be engaged with.

It’s the perfect distraction for me to fall into because it can provide me with any level of stimulation that I’m craving at that moment. If I want to really go hard, I go find a Lynel or even a divine beast, but if I just want to wander and take pretty pictures, I can. 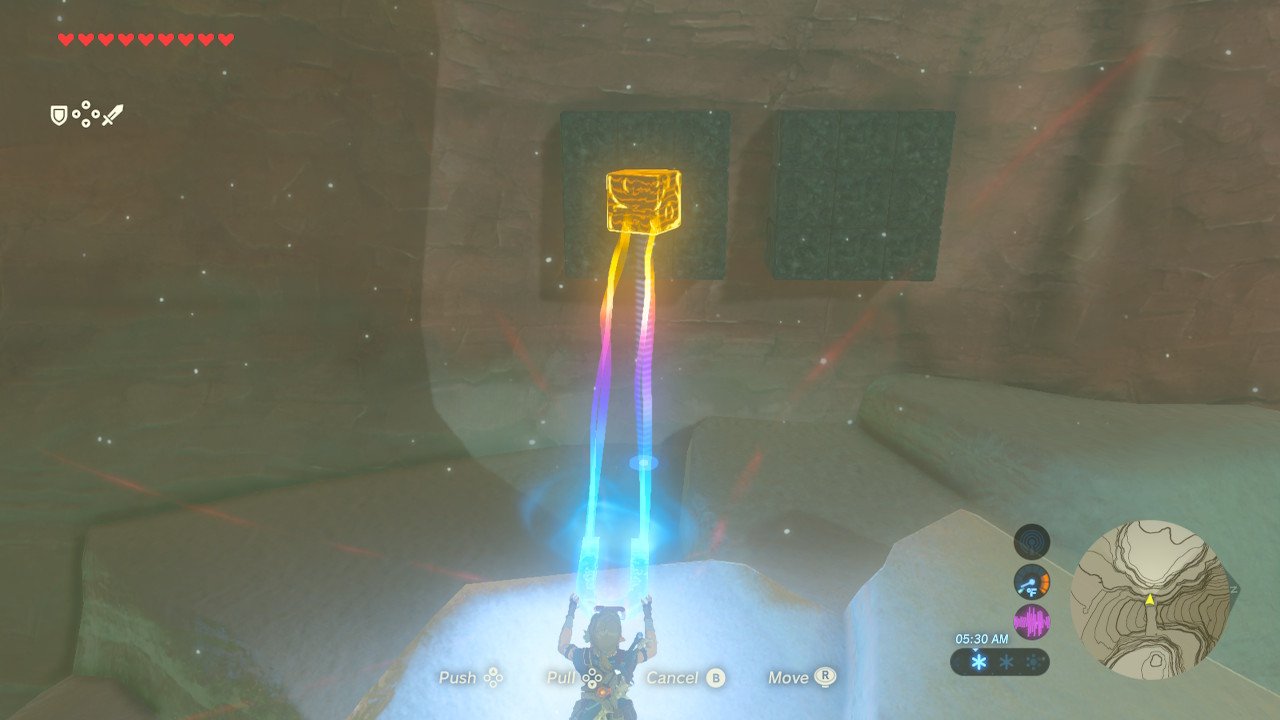 It also helps that any given task only has a certain level of commitment to it when it comes to how much time it takes to play. A Korok Seed will only take a few seconds, for example, and if I knock a few of those out on the way to a shrine I see in the distance, I’m getting not just the shrine, but the peaceful exploration and the little brain teasers from the Korok Seeds, too. That little five-minute encounter will feel super productive, and perfectly paced in how it challenges me, lets me relax, and makes me feel like I’m discovering things along the way.

I have a theory for why doing literally anything in this game feels so fun — you know how when you were a kid, you’d be motivated to do something on your own, but the second your parent or teacher told you to do it you suddenly didn’t want to anymore? That’s how I feel about Breath of the Wild‘s game design. When another game might nudge me to try and point me in the direction it wants me to go, Breath of the Wild just… leaves me alone. It rules.

If you’re an introvert like me, you know the relief of going into a quiet, empty bathroom at a party. There’s this immediate release of pressure when you realize no one else is there, and you are momentarily free to be your true self. For me, escaping into Breath of the Wild‘s Hyrule emulates that feeling perfectly. All of the noise kind of drops away, and I’m left to breathe for a bit.

Another thing that’s great about playing Breath of the Wild when I’m feeling burned out like this is that it makes me slow down in ways I wouldn’t expect. For one, I really love the traversal mechanics. Getting where I want to go, especially if it’s somewhere I’m going for the first time, takes patience. Climbing can become almost hypnotic in its rhythm, and it allows to me relax a lot while still having something to focus on. 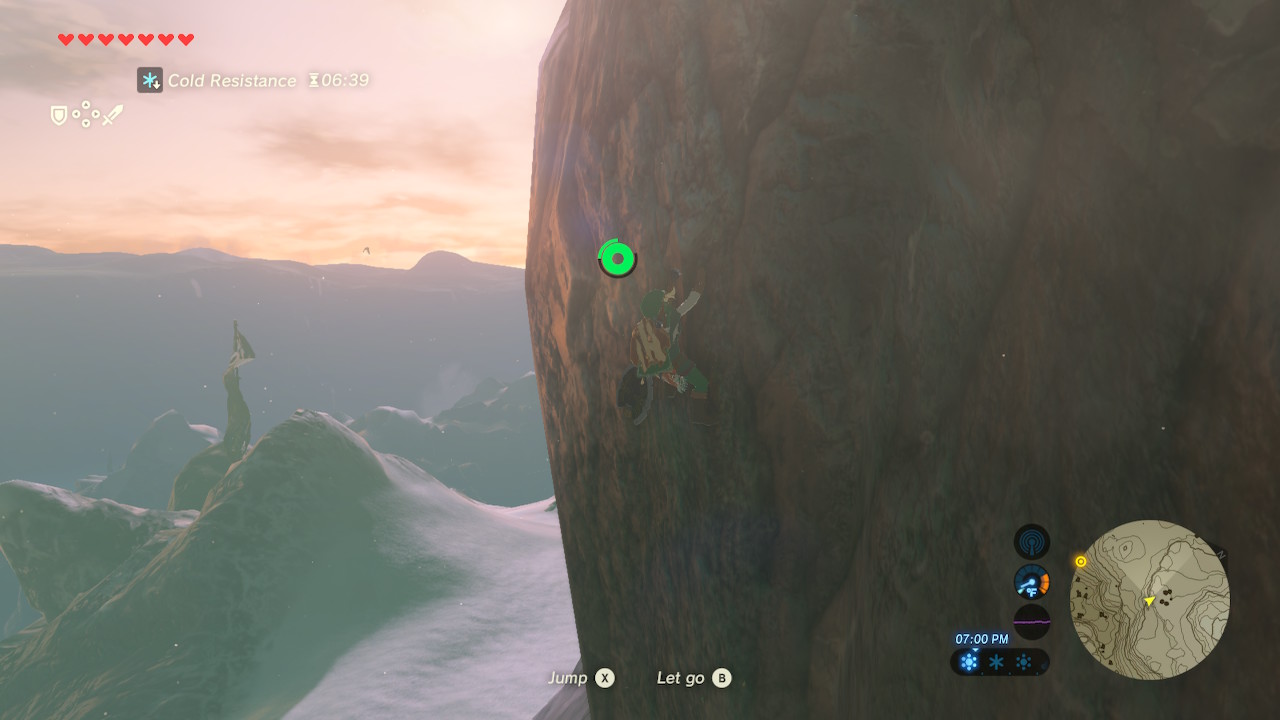 My favorite thing to do in this game is just find the highest point in whatever region I’m exploring, and climb to it. I love reaching the top and seeing what cool stuff I can see from up there. The journey is always a fun challenge to find the most optimal way to get there, plus I find a lot of fun surprises along the way.

The best moments, though are when you see something in the distance and think, “Hey, that looks cool, I wonder if there’s something over there.” Then you spend the next fifteen minutes trying to get there, and you’re rewarded with some arrows or a cool weapon or something. It’s like the developers are giving me a little wink like “we see you bud” and it makes me feel good every time.

It’s funny, after having worked in game development, I can’t seem to turn my brain off when I’m playing a game. I’m constantly thinking about how the backend is running to make everything I’m seeing on-screen work, or what it might have been like to be a QA tester for whatever I’m playing. 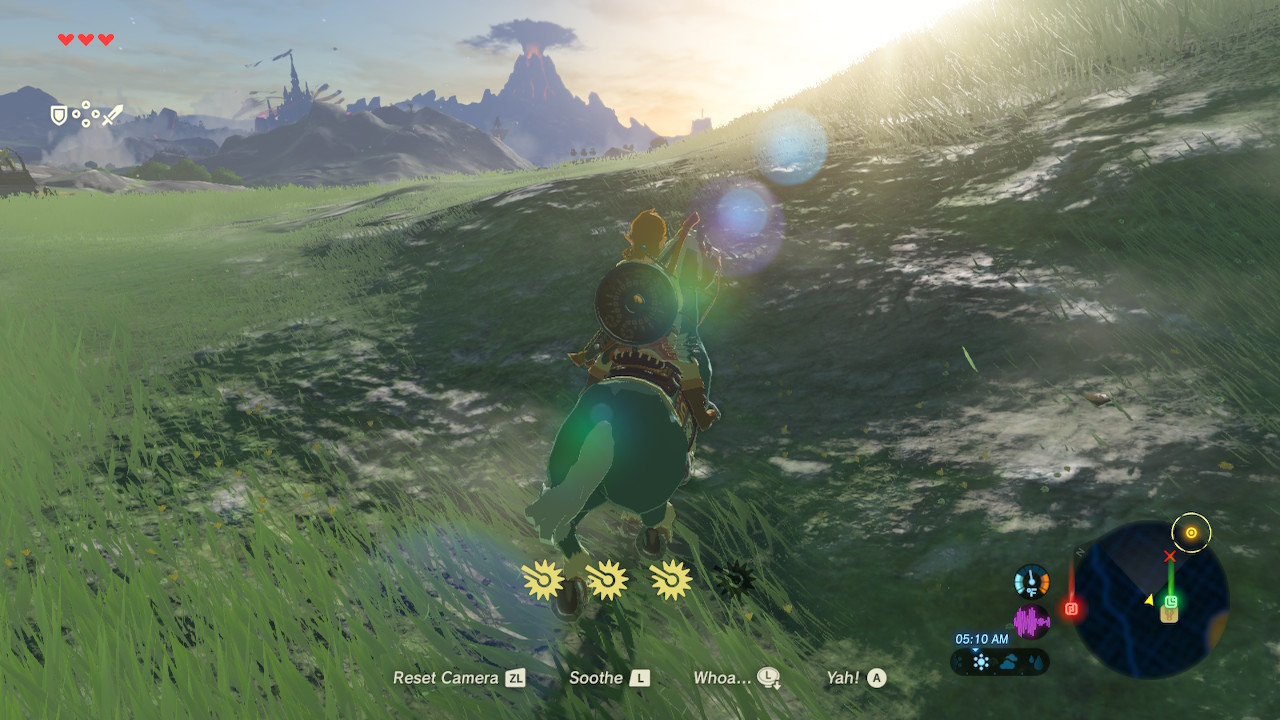 Breath of the Wild is the only game where that background program shuts off, and I completely get lost in the experience. Maybe it’s just because it’s minimal enough in its UI and quest design to make you forget it’s even a game in the first place, or maybe it’s just that I like it enough that I forget about all that, but either way, I’m thankful.

As we’ve gone through this pandemic, I certainly haven’t been as kind to myself as I should. It’s a silly, small problem to have, but I would always get down on myself seeing all the personal projects people have been able to get done, or even just work their way through a backlog of games they’d been meaning to play. Why couldn’t I get myself to do that stuff too?

I’m still learning that sometimes the most productive thing I can do is take care of myself, and Breath of the Wild has been instrumental in that.

These days games feel like they’re more for survival than fun, but that’s okay — the whole purpose of art is to give us a little bit of light in dark times. Breath of the Wild is a game that promises an adventure, which it certainly delivers, but at the same time it’s a game that makes me slow down and appreciate the little things.