Do you like spaghetti westerns with charm, humor, hammy accents and over the top violence? How about revenge flicks, video games with retro style graphics? Do you like fun? Are you breathing oxygen?

Well then partner ya better rustle up some dinero, head past the local brothel to your favorite virtual saloon and get yerself a copy of Westerado: Double Barreled, a game best served with a cold sarsaparilla. 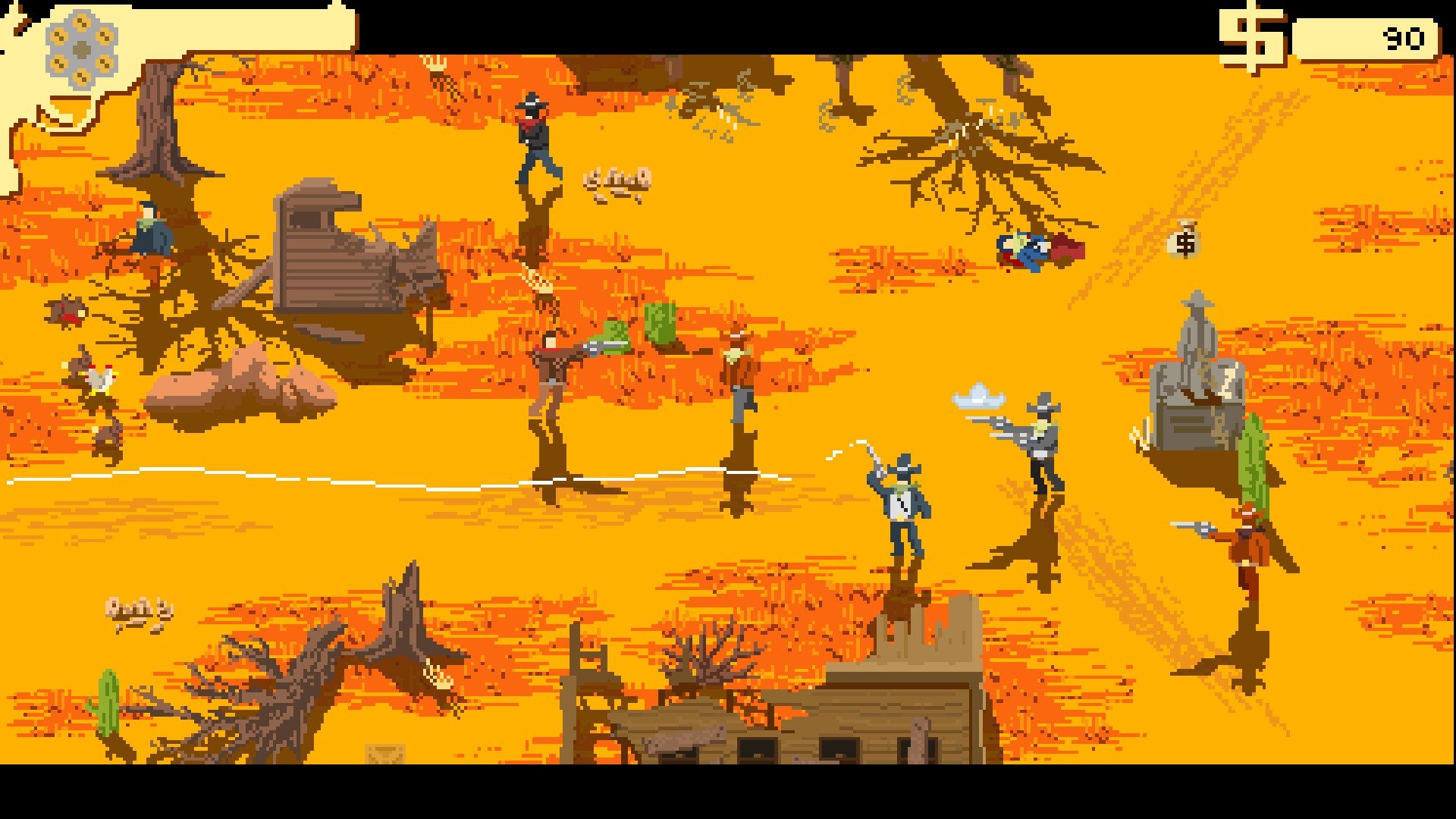 It starts like any normal day, waking up to help your family take care of the ranch, rounding up some buffalo back to their pen. The night sky glows orange in the distance while returning home, a strange sight for the west. The glow soon becomes embers as you realize your family ranch is ablaze, blood is strewn about the ground, your mother is slaughtered and your brother is fatally wounded. Your brother doesn’t have much information about who did this, but he does give you one single clue, information about the killers clothing. He gurgles blood as he asks for you to end his suffering, you cock your gun, as tears stream down your face you pull the trigger.

The beginning of Westerado is one of the strongest openings of a game I’ve ever played, and gives the player a real sense of purpose, revenge.  The universe Westerado takes place in is easily recognizable: A western with cowboys, a quest for vengeance, a bank, an oil man, a saloon with strong female characters in tow; this is a spaghetti western. Dialog for characters is written in a south western dialect that makes anyone feel like a real life cowboy when reading it aloud. A film strip overlay is shown behind characters as they converse, just one of many indications found throughout Westerado that indicate it takes place on a film set. All this overlayed with a wonderful soundtrack that would feel at home in any western flick.

Searching for the murderer entails wandering from town to town, through deserts and mines while talking to characters along the way. Conversations with characters often times lead to jobs. Jobs range from defending a ranch from bandits, to forcing a drunkard husband to leave the saloon at gunpoint, to sexing up “Miss Tress” a local promiscuous female. The variety of quests is refreshing, as each one is unique from the others. Upon completing these jobs characters reveal more information about the murderer, specifically what they are wearing. Clues are collected for you in a handy dandy notebook, which includes a wanted poster showing the murderer as described by clues. 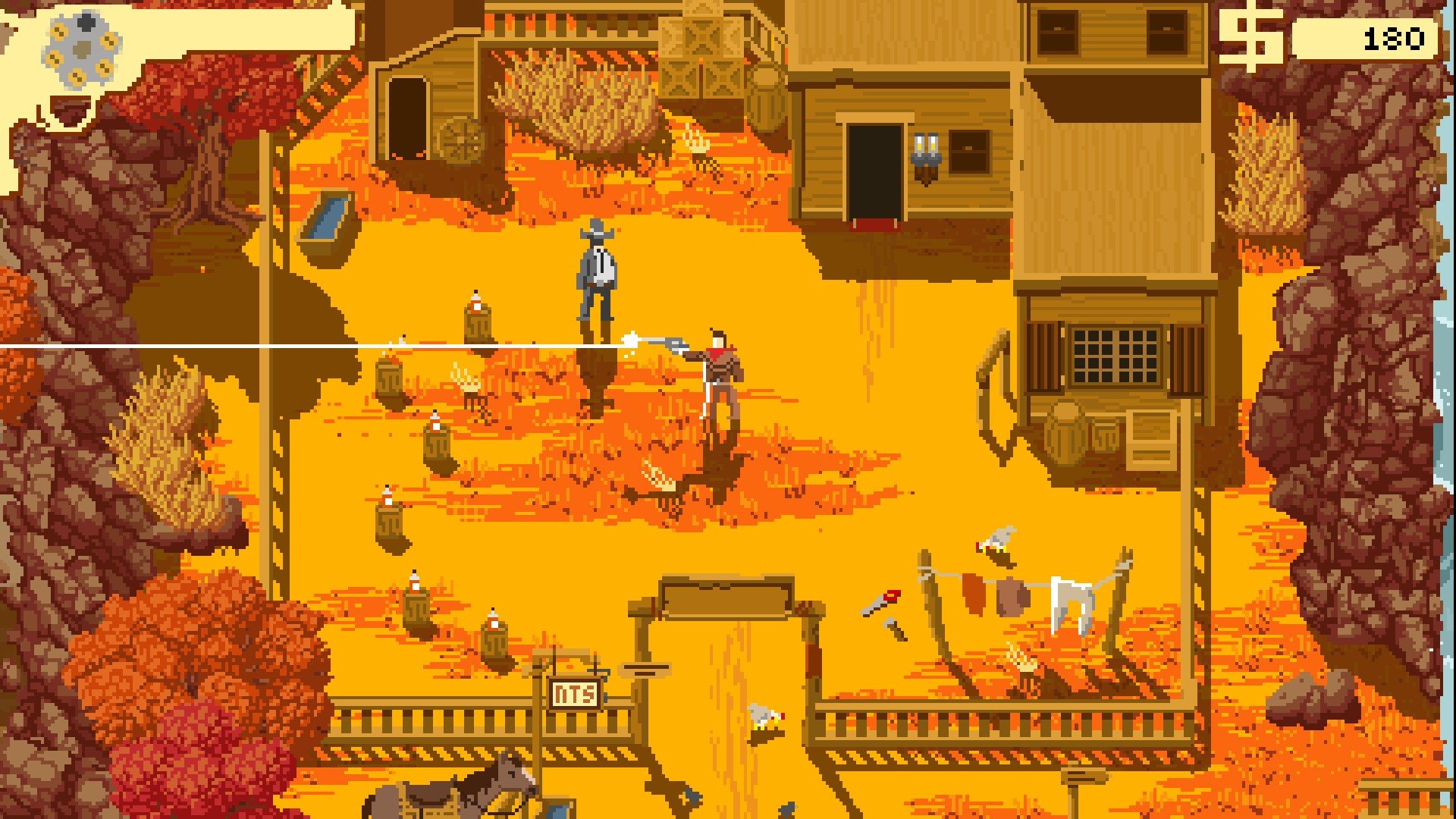 Jobs aren’t completed with just walking and talking as you’ll be using your six shooter to leave a trail of bodies on your quest for vengeance. Equipped with infinite ammo, the six shooter is drawn by pressing a bumper button, the hammer is cocked with one press of the right trigger and then fired with a second press. Reloading is done manually one bullet at a time with the left trigger. The controls feel like you’re holding an actual six shooter. Aiming, on the other hand, takes some getting used to. Your gun fires in a straight line from the barrel, which works mechanically but seems odd when the game is presented in three dimensional space, but after a few gunfights it will be second nature.

Westerado can be played with a co-op partner, with any of the four characters that can be unlocked through multiple playthroughs. Every time you play you’ll have a different murderer to gather clues on and locate, though the only things that change are clothing or gender, and the map stays the same. While having a randomly generated map could have been a better choice, it is a minor gripe for an otherwise near flawless game. 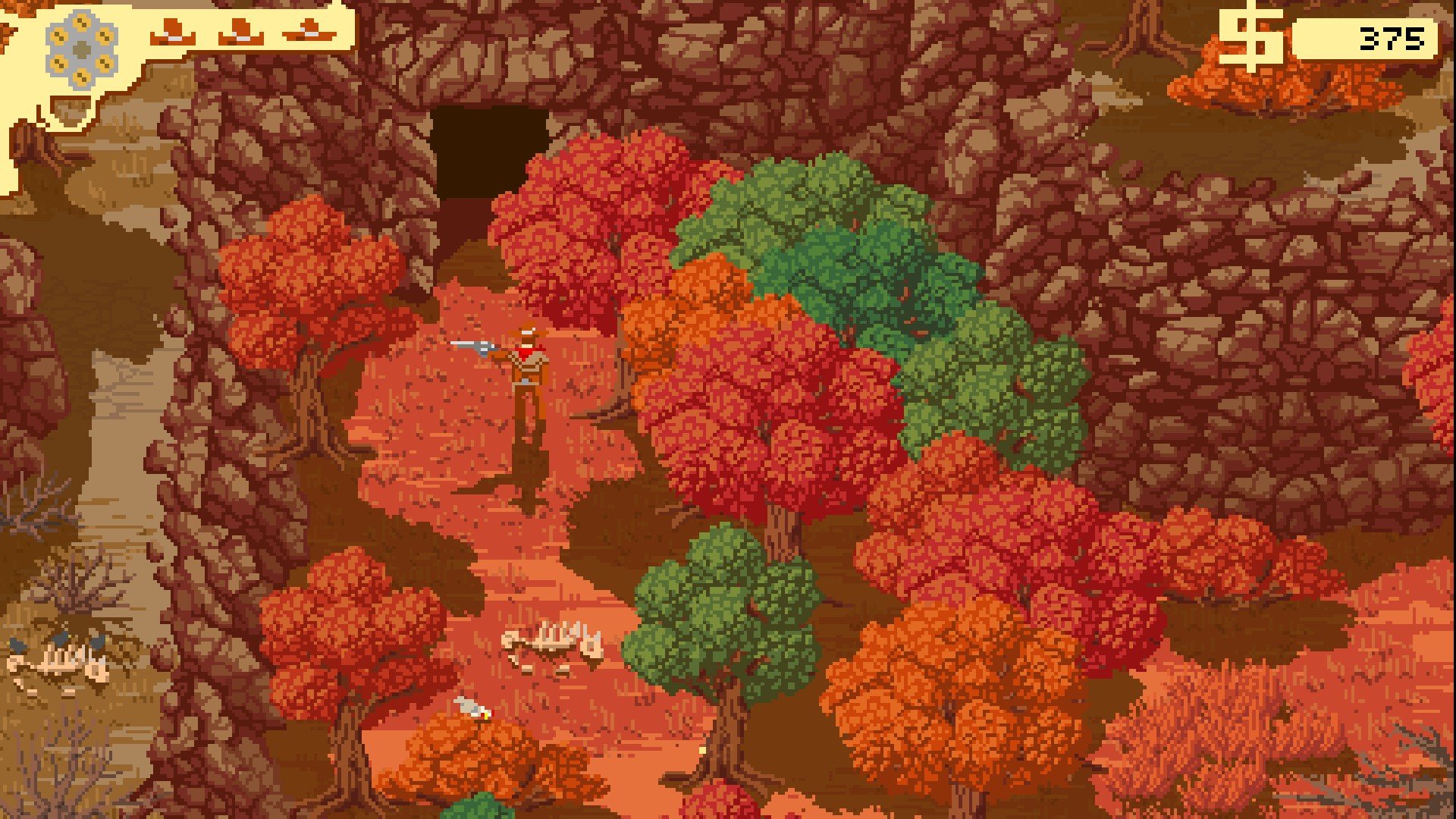 Rarely do I sit down to play a game, finish it and instantly start a new playthrough; this is one of those games. Westerado is a great package with lots of replayability and can easily be recommended for fans of westerns or revenge flicks. No other experience that I’ve played has done revenge so well. If you’ve been hankerin’ for a trip to the wild west saddle up and hang onto your hat, Westerado: Double Barreled is a dern tootin’ good time.