We are The Deadbeats

Growing up, I didn’t really play a whole lot of adventure or point and click games. For starters, I didn’t have a PC and there wasn’t a ton really available for consoles. And compared to stuff like Sonic the Hedgehog or NBA Jam, adventure games just looked boring; I was far more concerned with action than clever writing or an engaging narrative.

Now that I’m older (and allegedly wiser), I feel like I can more readily appreciate narrative over action, and it’s games like Wailing Heights that really showcase how rewarding adventure games can be. 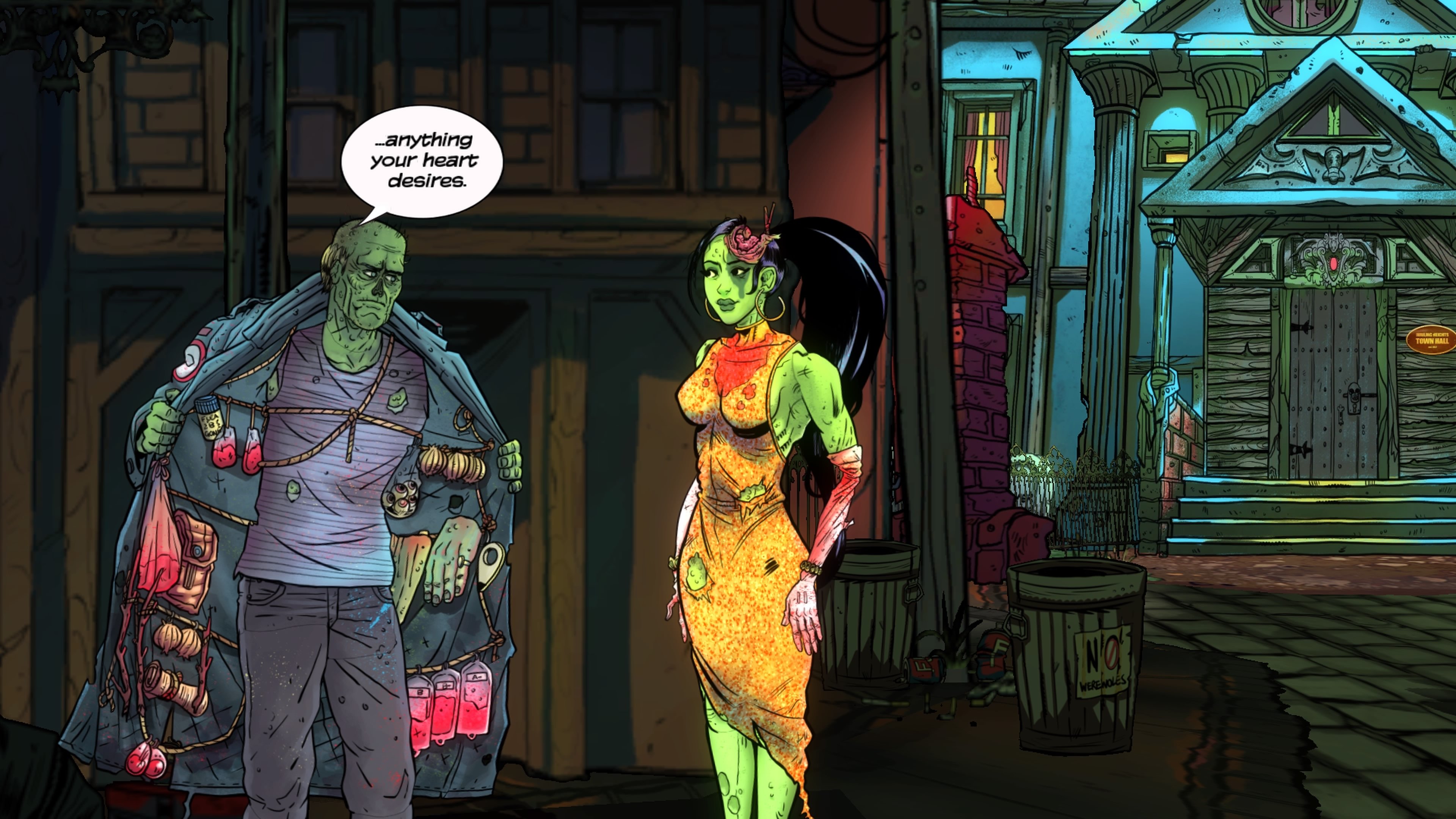 Wailing Heights tells the story of Frances Finklestein, producer of the legendary 60s pop band The Deadbeats. Following the death of the final remaining band member, Finklestein gets a call to produce a remembrance for the band, setting him off to the studio. On the way, things go awry and he finds himself in the eponymous town of Wailing Heights, inhabited entirely by the souls of dead people who have been reincarnated as either a ghost, vampire, werewolf, or zombie. From there, Finklestein must figure out his purpose in this town over the next seven or so hours.

As it’s more or less a classic adventure game, you’ll be spending most of your time in Wailing Heights crossing back and forth across the map talking to the inhabitants of the titular town, performing various tasks and solving riddles for them to collect artifacts and clues to advance the story. The game does feature one gameplay twist in a possession mechanic; once you meet key characters, you must learn the one thing they truly love and the one they truly hate, upon which time you can possess them in order to use their special abilities or have different interactions with NPCs.

Each monster type has their own ability to use. Ghosts can become invisible to read thoughts, vampires can turn into bats and fly to reach higher spots, werewolves can track scent trails in their wolf form, and zombies can…uh…zombie-walk and understand other zombies. It’s this possession mechanic that puts a different spin on the typical adventure gameplay, giving some pretty clever and hilarious puzzles to solve.

Unfortunately, the gameplay does fall into some standard genre pitfalls. For instance, there are several times where the game expects you to talk to a certain NPC with a certain possessed character in a certain order — all without giving you much by means of a clue as to why. This ambiguity sometimes works for it as you solve a riddle, slap your head, and wonder why you didn’t think of it before, but also goes the other way in making you wonder how you could have possibly known the solution based on the situation. And having to talk to people multiple times with different characters often leads to hearing the same dialogue over and over again. It’s fun to explore the town and meet its strange denizens; it’s not fun to have them tell you the same thing multiple times as you try to figure out exactly what the game wants you to do.

Luckily, the game does have an organic hint system in the werewolf’s ability to trace scents. It points you in the direction you need to go without being as obvious as a simple hint system in the pause menu. It’s a clever little touch that offers just enough to grease the wheels without outright telling you what to do. 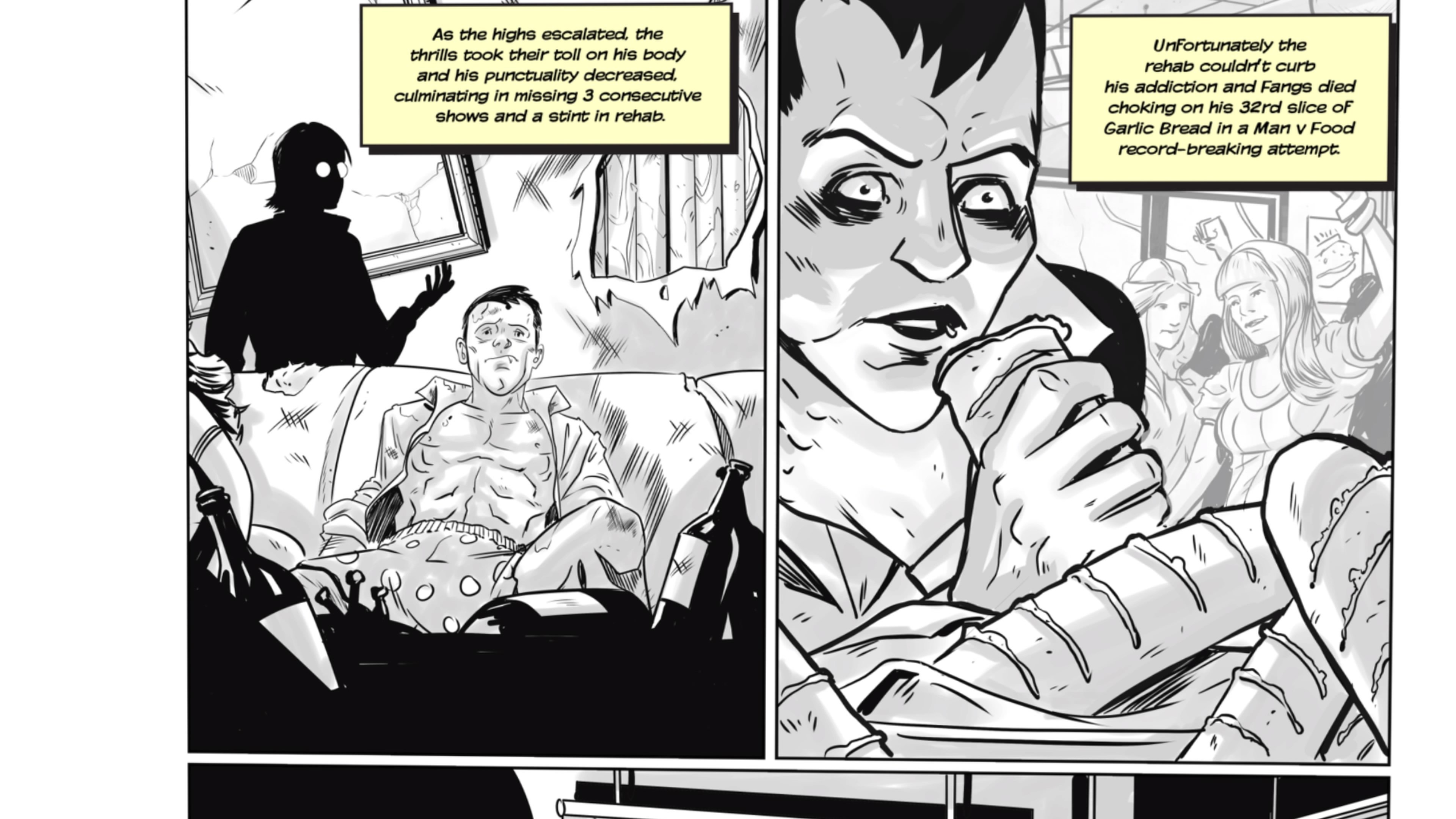 For most adventure games, the gameplay itself comes second to the writing, and let me tell you this game is superb in that regard — it is absolutely oozing with personality and humor. The dialogue is extremely punny and snappy, the character interactions are genuine and fun, and the story itself takes some really rewarding turns. I gotta say, I didn’t expect the twist the game took at the end, and I don’t think I could have enjoyed it more; it left a huge smile on my face as I watched the end credits roll, and I actually wanted to go back and play it again right after I beat it. That’s something I almost never do with games.

Even better than the story is the music. As a spooky rock-opera, the game is centered around music and it absolutely nails that aspect. Several musical genres are represented here, from hip-hop to jazz to folk, and all are competent at worst, and absolutely delightful at best. What drew me to this game in the first place is the theme song found in the trailer, which sounds like it could be from a niche copycat band of The Beatles or The Monkees, so I was really pleased that the music in the game as a whole is just as catchy and authentic. And since each character has a theme song that plays when you switch back and forth, you’ll get to hear them a lot. I know a lot of people like to listen to game soundtracks outside of playing the game because it moved them so much, and I’ve never been able to connect with a game’s music like that, myself — that is, until now.

To top the whole thing off, the visuals are just as appealing. I’m a huge fan of monsters and Halloween-y type stuff, so the beautiful and low-level-spooky hand-drawn art really spoke to me. Even if you’re not as enthralled by the subject matter as I am, the visuals are still crisp and appealing, and even the sometimes-wonky animation is super cute and charming. My only real complaint in this field is the cutscenes are largely just comic panels, and sometimes don’t quite pop as well as the visuals featured in-game. But all in all, the game is just as fun to look at as it is to hear and play. 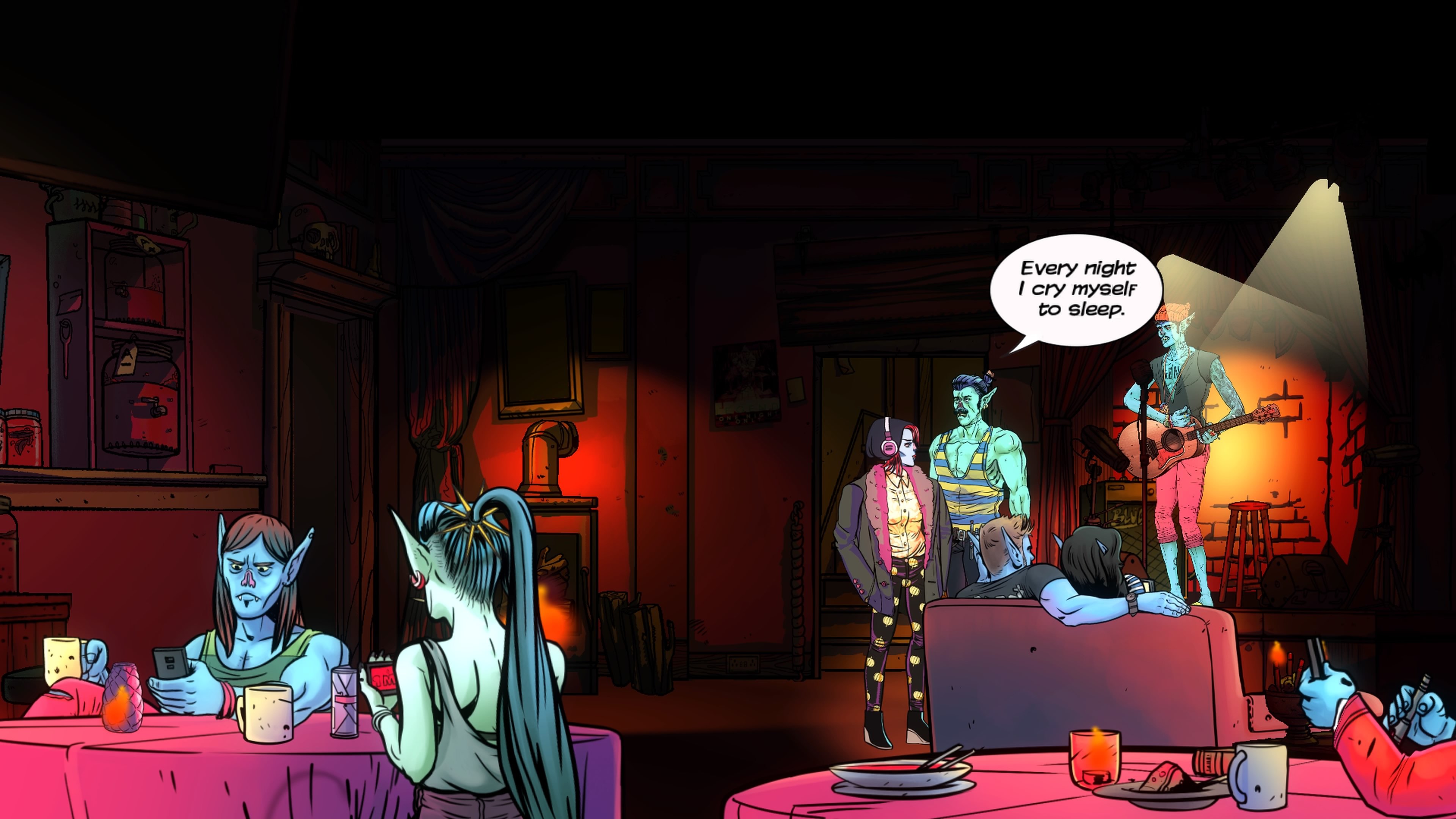 I thought the game looked kind of silly and fun when I first saw it, but I honestly didn’t expect to enjoy it as much as I did. Sure, it was frustrating at times as I ran around the town with each character trying to trigger the one specific thing I needed to do to advance the story, and yeah there are some minor bugs that cause your characters to freeze or disappear behind some level architecture. But after the game was over, I had forgotten most of my previous complaints and found that I had legitimately enjoyed playing it. This has somehow become one of my favorite games, and I couldn’t be happier about that.

Let Wailing Heights bite you — then you can be a Deadbeat, too.