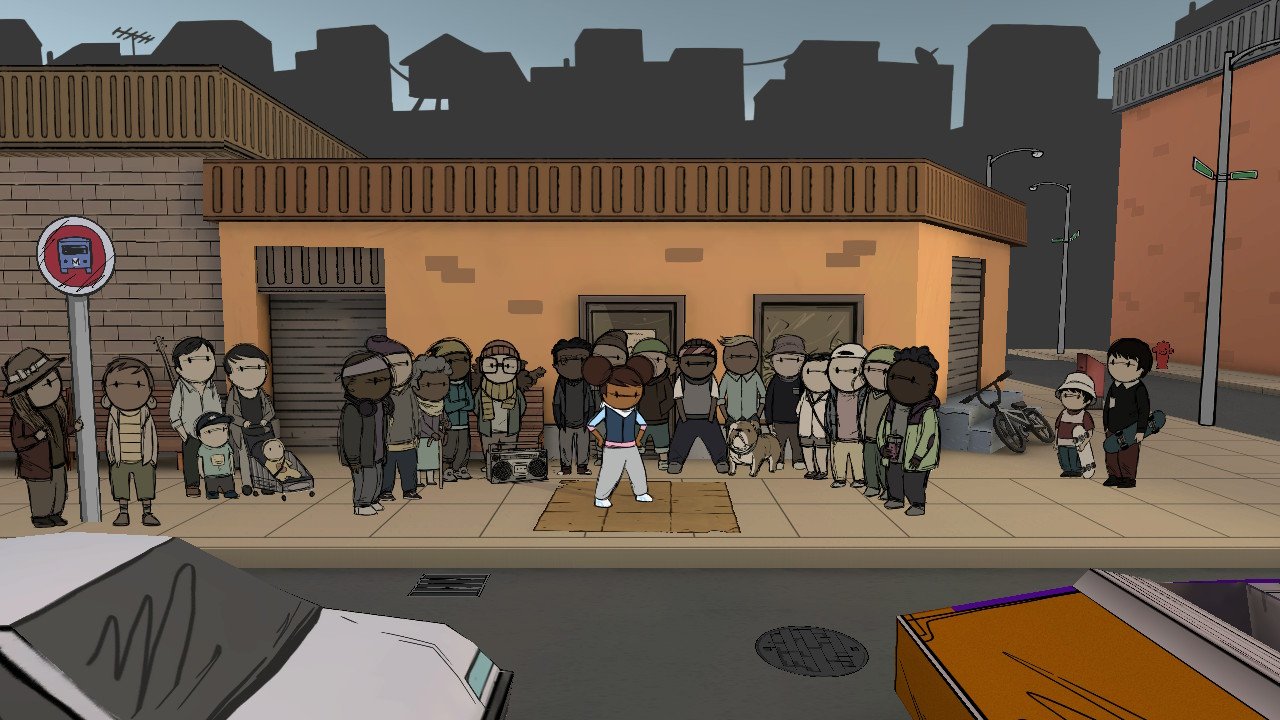 There’s nothing else out there quite like this game. Floor Kids attempts to meld the free-flowing body squirming of breakdancing with the much-loved rhythm genre, succeeding surprisingly well.

It’s a project created by an artist named JonJon and a musician called Kid Koala (most well known for his part in the hip-hop supergroup, Deltron 3030). Floor Kids is positively brimming with passion. A lot of love went into this thing, and it truly shows. 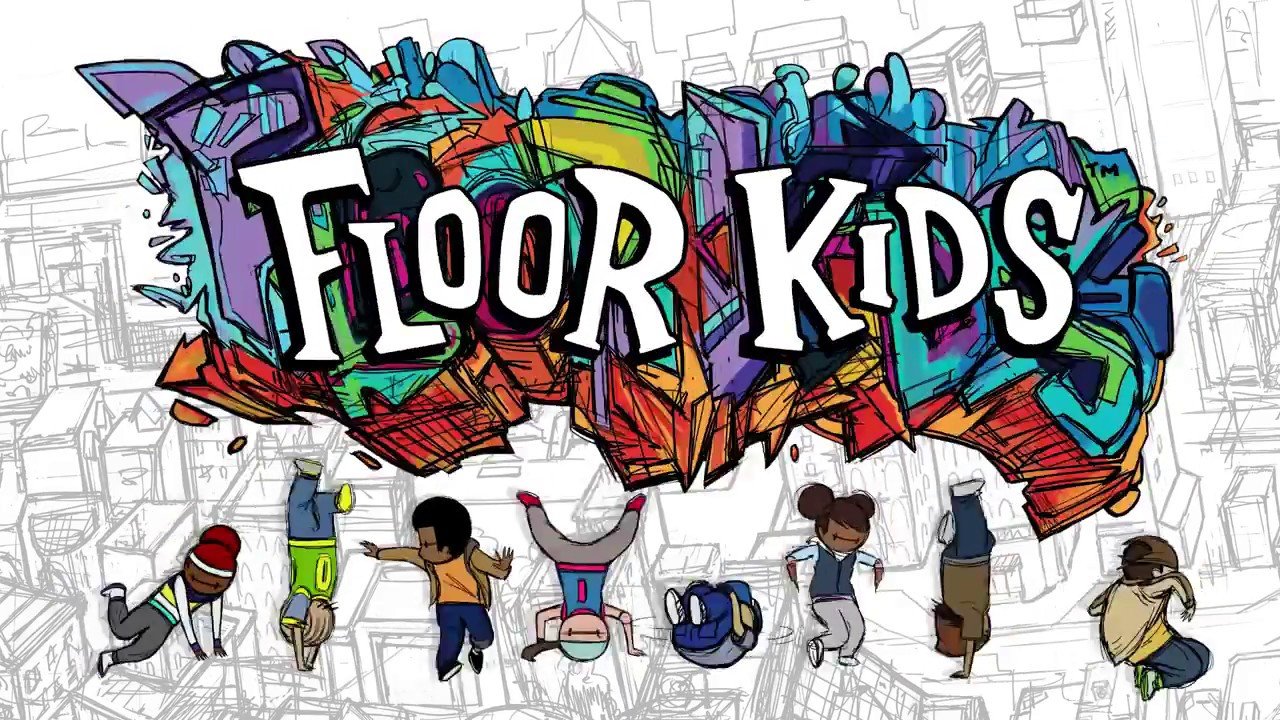 It takes a bit of time to get used to the flow of things, but it’s all rather intuitive once you finally get into the groove. Your basic moves are divided between Toprock and Downrock, and you can switch between the two positions by flicking the left joystick up or down. While there, you perform different moves by pressing the face buttons in tempo with the song that’s playing.

Your other available skills come in the form of freezes and power moves. A Freeze is performed by holding down one of the face buttons, while simultaneously holding down the joystick in the corresponding direction (left, right, up, down). Power moves are easy enough to pull off too, you simply move the left joystick in a circular motion. You can mix these up by switching the direction you’re rotating, or holding down the left or right trigger.

The last big part of the puzzle is Breakdowns, which happen twice during every song. These are more akin to traditional rhythm games. You just have to press the face buttons, in time with the beat, as a cursor scrolls across the screen. These segments are pretty plain jane, but they mix up the gameplay well enough to keep things somewhat interesting.

That’s all fairly simple sounding, but the trick is to mix and match different moves to form combos, which will award bonus points. The crowd will also call out requested moves which dole out extra points as well. Your goal is to score as much as possible on each track, while also managing to keep your character from making sloppy transitions, or falling on their ass, and looking like a total dingus.

This all works really fucking well as a foundation for a badass rhythm game, but unfortunately, there just isn’t enough variety to keep the momentum going throughout. Eventually, you will master all of these moves and fall into a routine. While this does a great job of reflecting the way that many breakdancers develop their skills into a finely-tuned performance, it doesn’t translate incredibly well into the realm of video games. I think this could have been easily avoided by providing different abilities and combos for players to unlock throughout. Instead, your skillset is exactly the same from the very first song to the end. 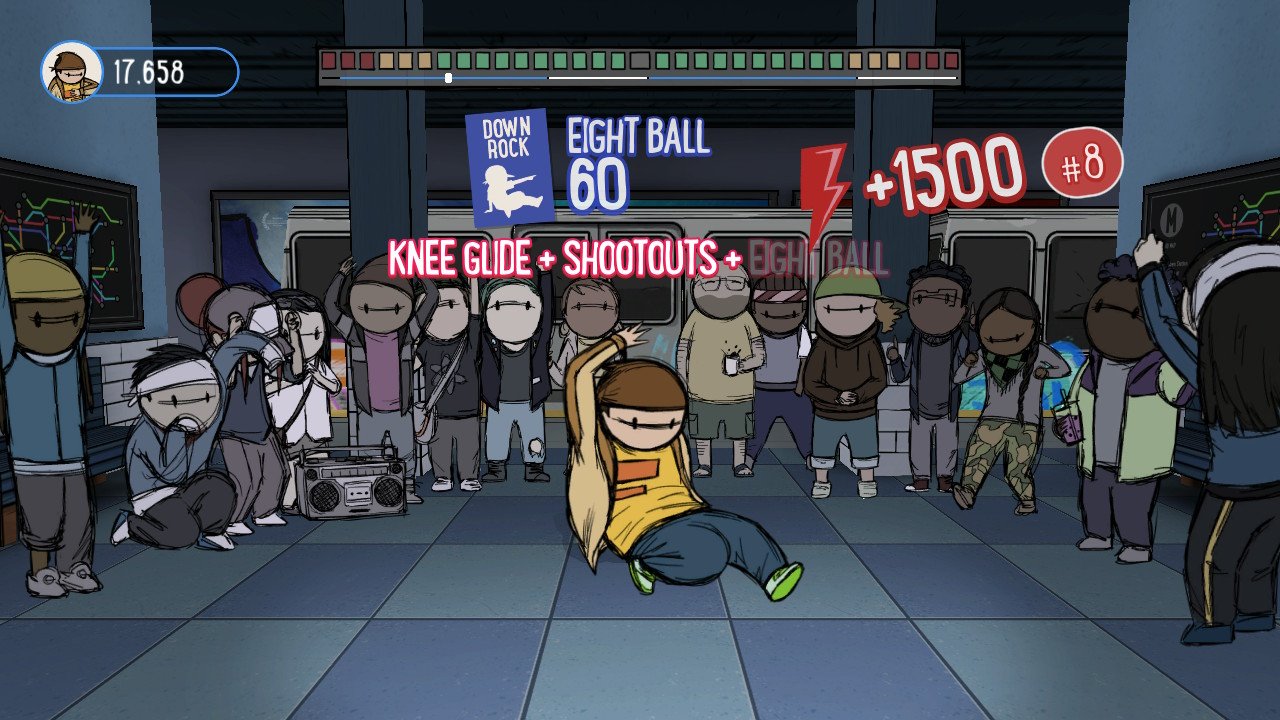 The soundtrack is straight up fire, though. Kid Koala absolutely kills it. I do wish there was a tad more variety, however. Things start to sound a bit too much alike during the middle of the game, and I think that’s mostly just a product of the forced re-occurrence of the Breakdown segments. Fortunately, things do pick up again towards the final few tracks.

There is a local multiplayer mode, but, while it does offer up some cool ideas, it’s mostly just a distraction from the story mode. I’m using the word “story” pretty liberally here as well. It really just amounts to a few panels of flowery language juxtaposed with pictures of animals, buildings, and random objects between each venue. It does its job, taking you from point A to point B, nothing more.

While it may sound like I’m being a bit harsh on Floor Kids, it’s only because I enjoyed it so damn much. It’s a really fucking cool experience, and I’ve never played anything else quite like it. The price tag is a bit steep, for the roughly three to five hours of gameplay on offer, but what’s here is extremely solid fun.

Ultimately, what we’re left with is a somewhat flawed, yet enjoyable experience. It may lack in the variety and depth departments, but it manages to make up for its faults by offering up an absurdly stylish, good time. It may not be perfect, but it’s a very well executed idea. It’s boldly different, and it left me excited for what might come next.