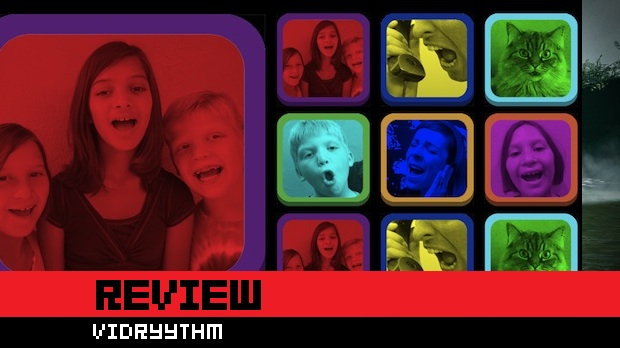 Harmonix’s VidRhythm is a cool blend of musical exploration and remixing. It encourages you to be creative and silly. It makes you laugh at yourself. It’s maybe more of an app than a game, but I’m sure you’ll have fun with it, regardless of classification.

VidRhythm takes your microphone/camera-equipped iOS device and turns it into a musical, video-making tool. The nice part is that it requires no technical knowledge, and maybe the minimum in singing ability. It’s super-easy to use, it makes fun videos, and it’s really easy to share the results. No, VidRhythm is technically not a game. But it’s so fun to play with that it’s sure to be a hit.

I had a blast reviewing this title, as you’ll see in the videos below. I created every one of these masterpieces with VidRhythm myself.

My finest creation with VidRhythm: My corgi barking in chorus.

On the technical side, under the hood, you’re really playing around with musical sampling. VidRhythm‘s various songs and modes takes your voice or any other audio input and processes it so it can be re-pitched and used for playback. Sometimes you’re asked to provide drum noises and other weird effects, like cat hisses (seriously!). I had a lot of fun making those with my mouth, but nothing is stopping you from using real drums, pots and kettles, or anything else you’d like. To keep tuning correct, VidRhythm gives you guide pitches to match, so if you can’t carry a tune in a bucket, you’re kind of screwed on these parts. Of course, you could cheat like I did and use a real musical instrument to give these pitches. In the piano rag below, you’ll see that I used a real grand piano to give the pitches. You can hear that the rendering is musically accurate.

Cheating the ragtime song with a real piano.

This sampling session is paired with photography and video clip recording to personalize your videos. The photos/videos are snapped at the same time you’re performing for the audio sample, so you’ll need to position your iPad/iPhone before you start making noise. After all the sounds and photos are captured, a bit of processing follows and then a sort-of music video is outputted. From there you have the option of sharing the song on YouTube, Facebook or keeping it for yourself in your Camera Roll.

The obligatory fart one

I imagine that after a long while you’ll exhaust all the possibilities of VidRhythm, but I haven’t yet. Every time I start to put it down, I think of something else silly to make. The results aren’t always outstanding, but they’re likely to be really funny. For example, I tried my moan-singing for one classical piece while using images of my favorite breakfast cereals for… flavor. The song sounded terrible but the video was still funny. I’m particularly proud of my fart-noise dubstep creation as well, though no one else will be. Of course, nothing touches my corgi video (first video above). The rapid trigger barks are the best thing that has happened to me this year.

In VidRhythm there’s about 20 original songs in genres ranging from Classical to Reggaeton, and then a choice of 10 styles to apply to these songs. From there, it’s up to you and your creativity to make something great. Or terrible. Sample, sing, shoot, record, export, then spam your Facebook feed and repeat. It doesn’t get old, though I’m already hungry for more songs. In fact, I’d love to be on the creation side of these original tunes. Call me, Harmonix.

I’ve remixed the bark song “D-O-G-S” five ways already. I made a song with a combination of real drum hits and faux pterodactyl screams and played it over my hi-fi speakers at full volume. If that stuff sounds fun to you, you’ll like VidRhythm. If you’re looking for something more complex or serious, you need to look elsewhere. There is no score, no leaderboards, no achievements to be found here. Just music-making fun.

You could over-think it, or you could just get it. Just get it.