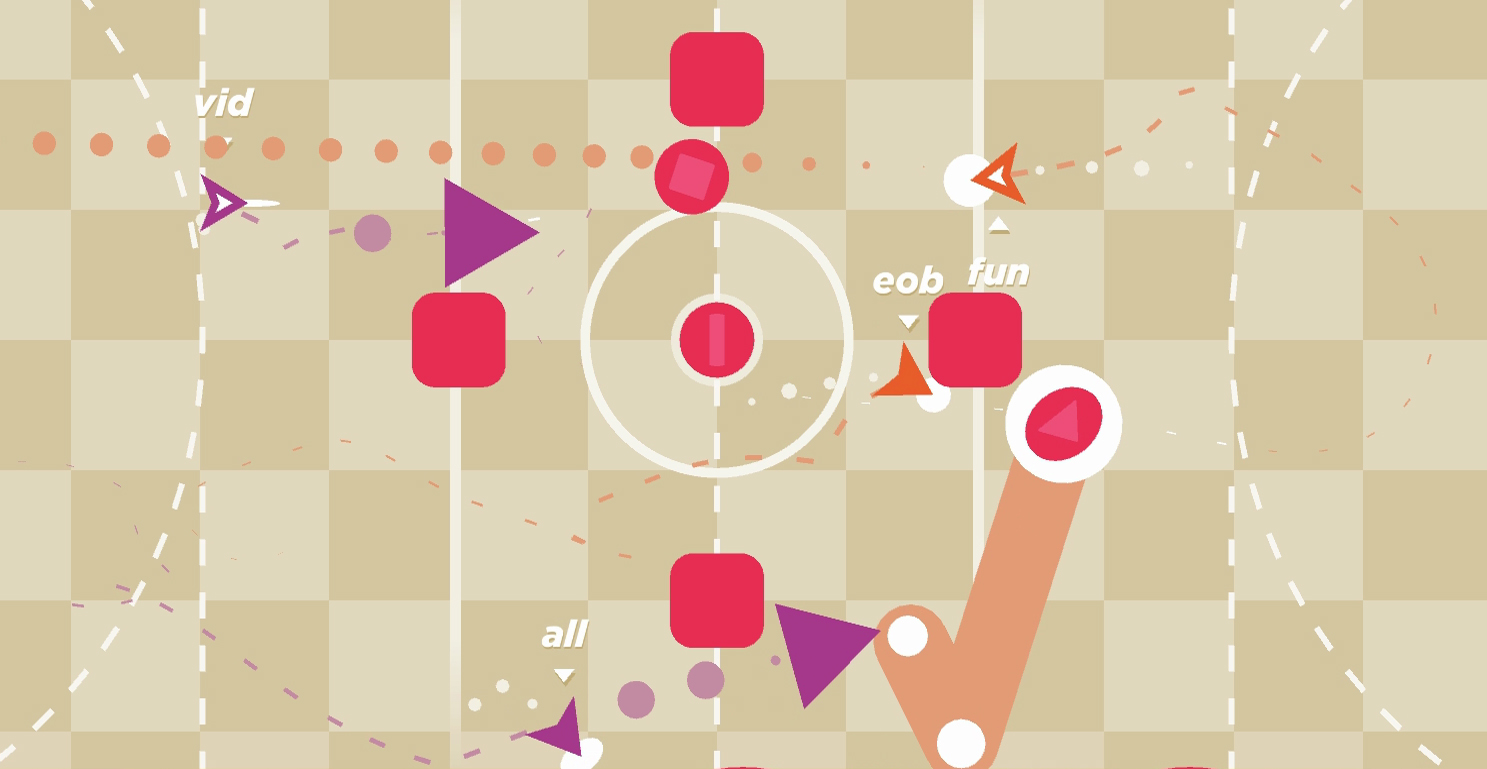 Jam that home run from half court

Normally in a review, I wouldn’t want to get too bogged down with discussing minute mechanics like the nitty gritty of what a certain button does, or how one type of attack differs from another. I’d want to concentrate on the bigger picture, discuss how the game made me feel, what the experience was like in a broader sense.

I can’t do that for Videoball, because Videoball is all about its mechanics. It’s a game as close to the Platonic ideal of a video game as it gets. Everything that could be considered unnecessary or distracting from the goal of playing the game has been cut off at the root and cauterized. It’s a game 100% about big triangles shooting smaller triangles to knock a ball into a goal. There’s something beautiful about that kind of focus. 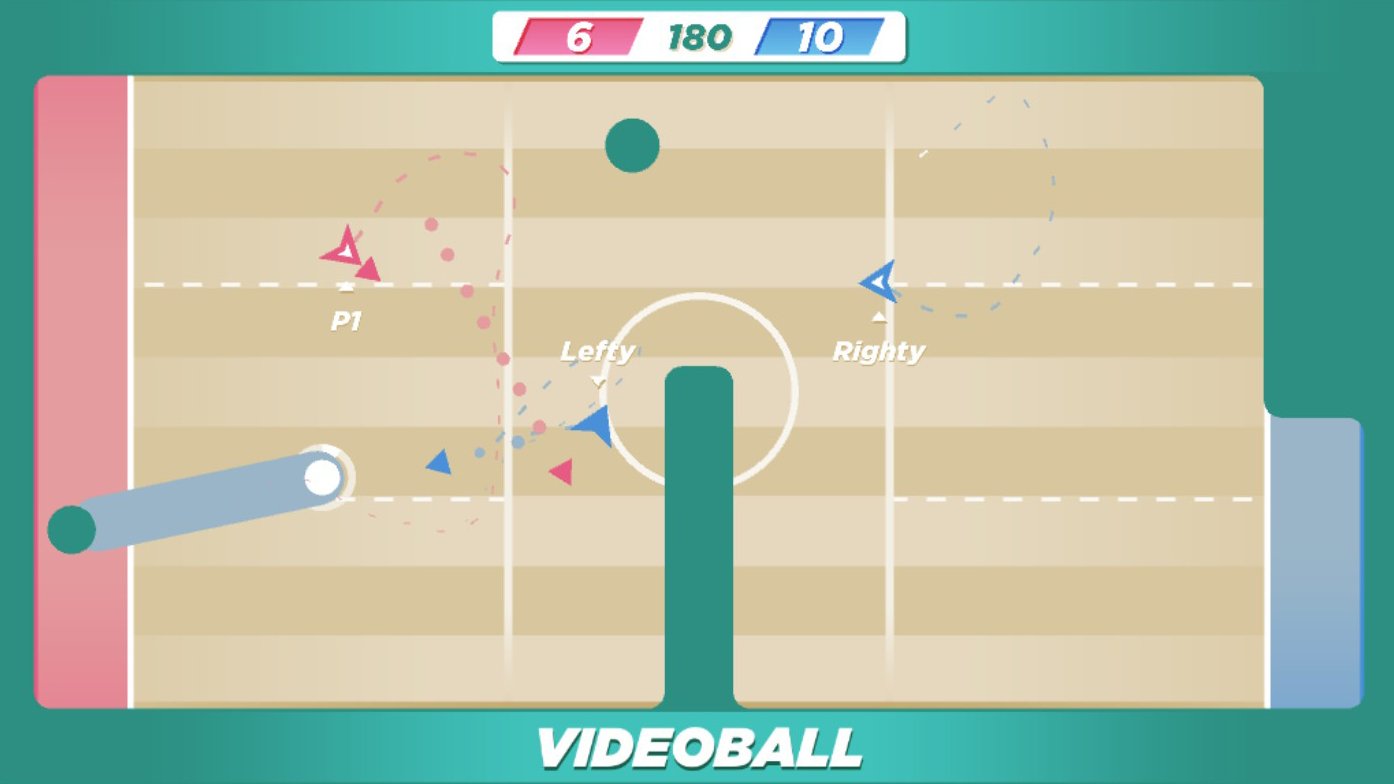 Videoball looks nice and friendly on the surface. It has a bright and charming color scheme (which you can customize), cute little triangles for players, and walls that slightly bend and ripple like rubber, calling to mind a bouncy castle, or those big inflatable things they put in the gutters during a kid’s birthday party at a bowling alley. It has lovely upbeat music that sounds like you remember SNES games sounding in your deepest nostalgic reveries. It’s disarming.

But Videoball is not nice and friendly. Videoball is an electronic death-sport that will destroy friendships and consume lives. Videoball might be evil. I might be okay with that.

Following in the footsteps of other recent minimalist games like Divekick and Nidhogg, Videoball looks simple and straightforward at first glance but secretly conceals, switchblade-like, a staggering amount of depth and complexity. The game rules are easy enough to understand: you want to knock the ball into the enemy’s goal. You do this by hitting it with triangles. The longer you hold down a button, the bigger your triangle shot will be and the harder it will hit the ball. Hitting enemies with a triangle stuns them for a moment. Hitting teammates with triangles stuns them for a moment. Fair enough. 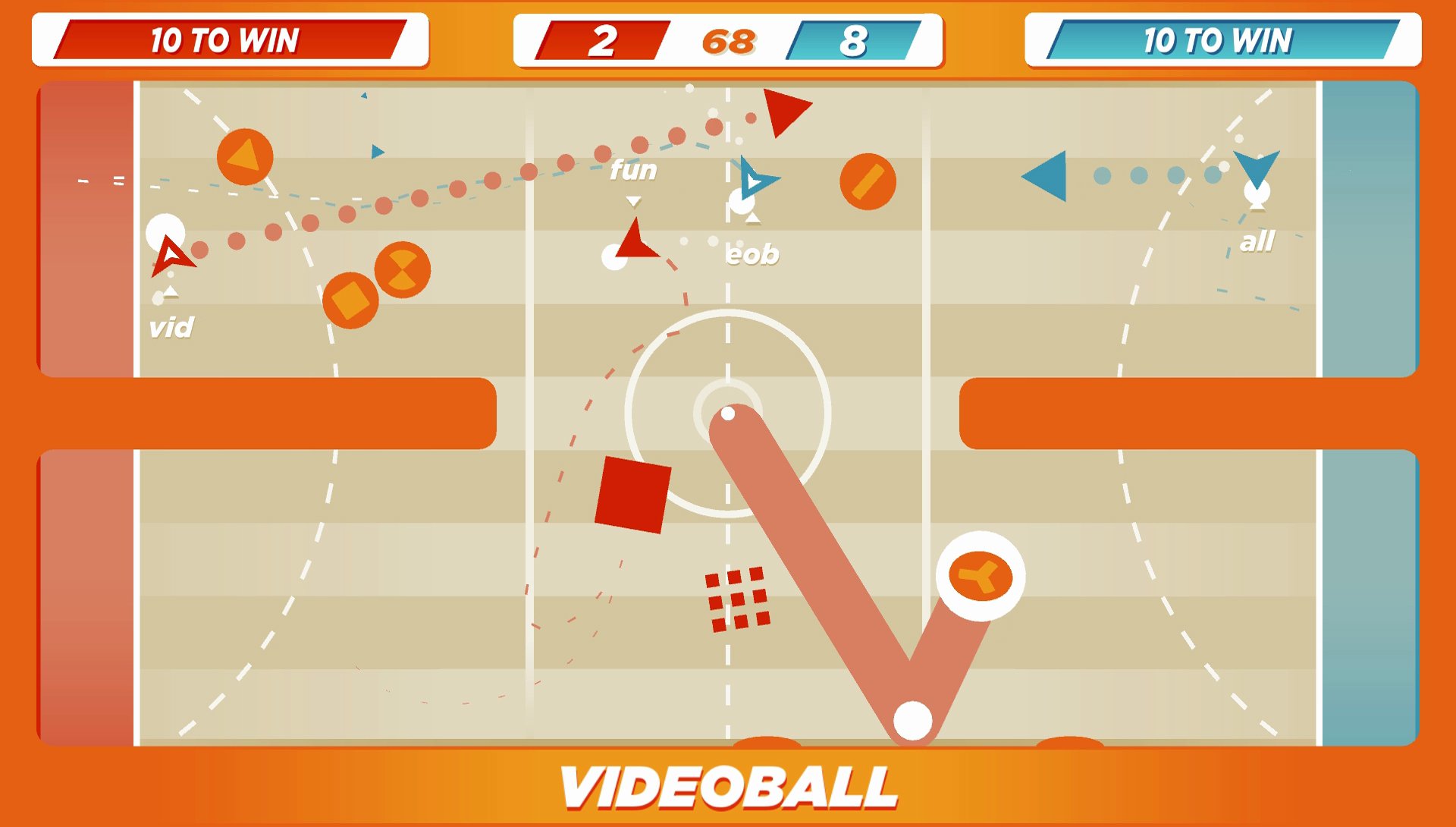 But that hardly does Videoball justice. Each level of triangle shot has its own express purpose and utility. Tapping the shoot button results in a meager little triangle that will only nudge the ball a little and disintegrate on impact. Holding the triangle to stage two fires a larger triangle that will knock the ball fairly hard, but better yet, doesn’t disintegrate when it hits the ball. Fire it just right, and one medium charged shot can skip a ball across the entire stage like a kid kicking a can down the street. Be slightly off, and the ball will deflect off to the side and your wife will leave you for a calm, steady man who has the quiet resolve necessary to hit the ball flush.

Charging to a mighty level three will fire a massive triangle that launches the ball clear across the field, complete with a blazing color trail. But there is a catch: when the ball is in that state, any other shot will propel it just as hard, even in the reverse direction. Suddenly the utility of those tiny little tap shots reveals itself. It’s not uncommon to see poorly calculated charged shots completely boomerang on a player, or turn into a lightning-fast rally between two sides of the court.

In a clever move, players can’t just hang around with a fully-charged shot waiting for the right moment like Mega Man scheming on Sniper Joe. Holding the shot button down a beat longer than it takes to charge to level three deposits a solid cube in front of a player. A temporary barrier that can be broken up with a few shots or contacts with the ball, but can still pose an obstacle depending on the situation.

While this mechanic handily promotes active trigger discipline, it also opens up some more calculated defensive tactics. A dedicated back-line player can create several blocks to slow down the enemy. Or a player who realizes at the last moment that a charged shot will be deflected can instead pivot and work on boxing in the opposition instead.

This isn’t scratching the surface of all the little interactions and nuances. How a ball propelled by a fully-charged shot will dislodge and move other balls it comes in contact with. How only triangle shots can move balls, but players can block them at the cost of stunning themselves when you need to throw yourself on that grenade. How medium shots won’t disintegrate from touching the ball, but can be destroyed by any other kind of impact. The interplay of player-on-player combat, and the constant need to fend off attacks and stun rivals while not losing focus on the ball.

While the overall goal (get the ball into the goal) is always the same, there are almost endless variations to the rules and court. Do you want one ball on the court at a time, or five of them bouncing off each other? Do you want to play for first to ten points, thirty, or largest score under a time limit? Do you want a nice clear court with a small goal area on each side or a convoluted mess of walls and choke points leading to a net the size of the field? It’s easy to keep things fresh by tweaking a few rules. 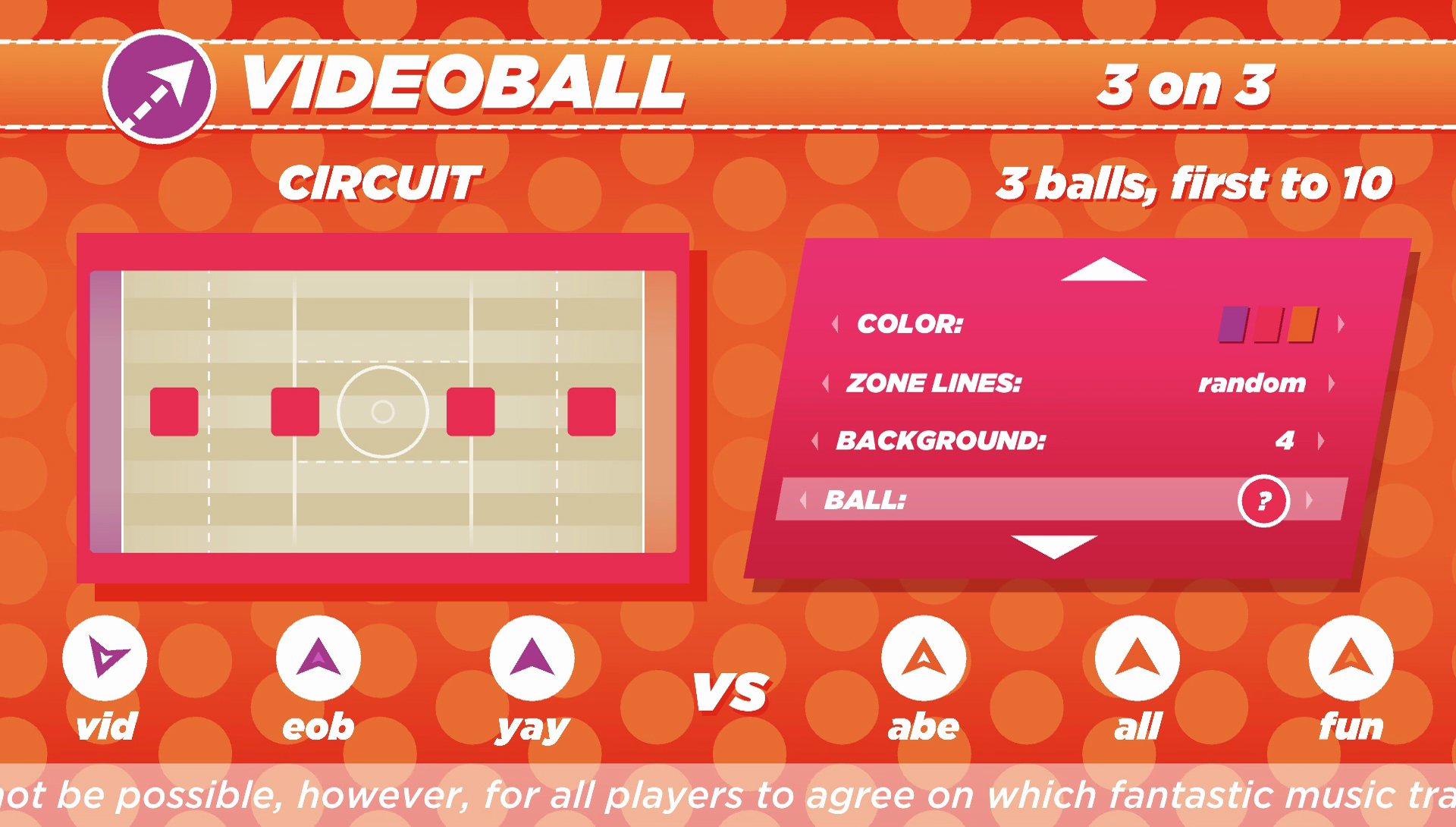 Best of all, it all feels really good. There is a great sense of momentum and movement in Videoball. The sense of acceleration after a dead stop, the slipperiness of trying to reverse direction, the desperate race for a last-second save. Everything has a pleasing kind of grip to it.

Videoball supports online play (with casual, ranked, and team matchmaking even) but that doesn’t feel like the right way to digest the experience. You want to be in a room with a few friends, shoulder-to-shoulder, laughing and arguing and turning shockingly serious about Videoball in a very short period of time from the comfort of a living room or den. It has the same diabolical trajectory of the best nights of Super Bomberman. That dark turn from “this will be a fun thing for everyone to play for a few minutes” to “I WILL KNIFE YOU IN THE THROAT” hyper-competitiveness in the span of an hour or so. 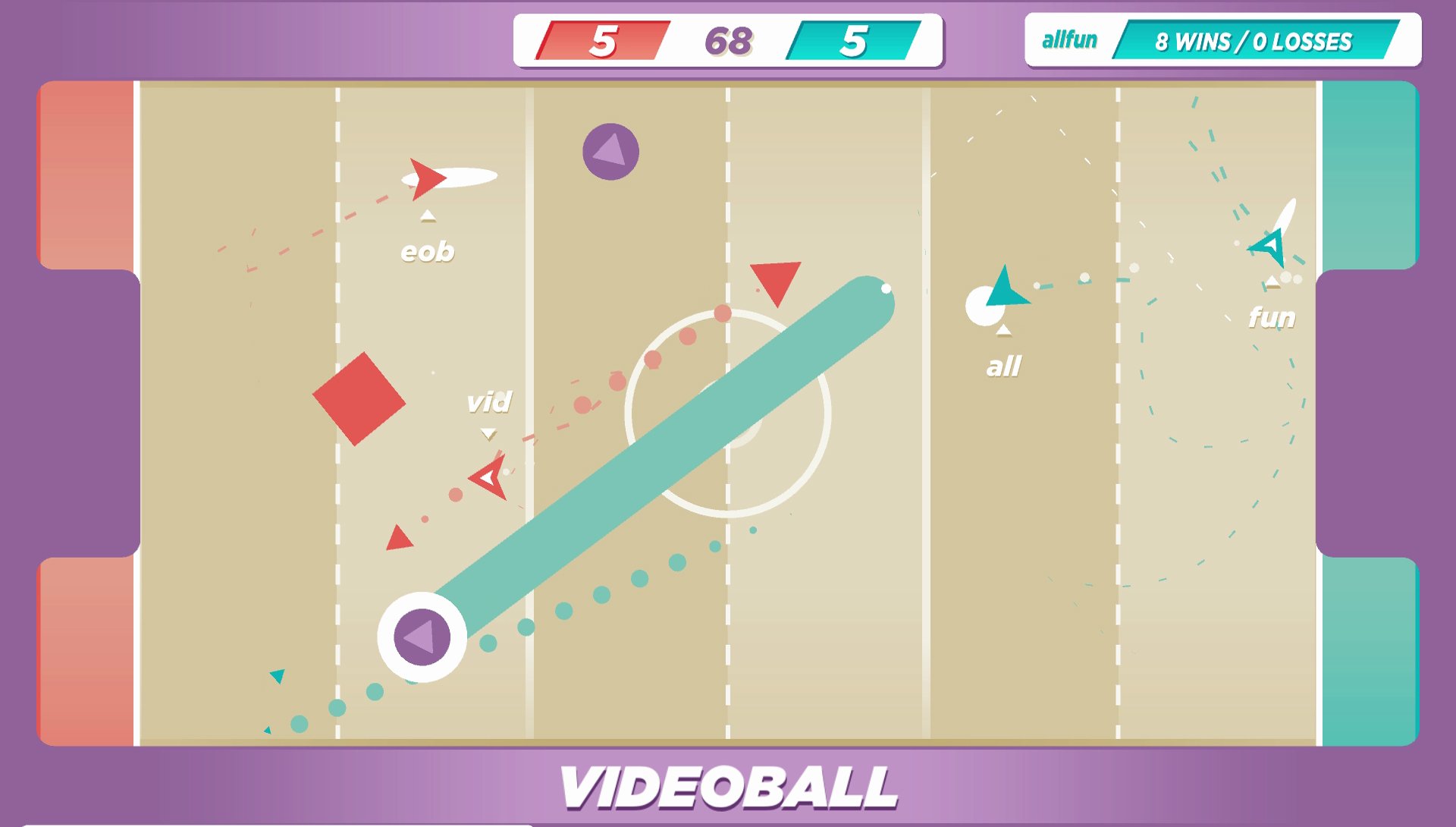 There are some surprisingly robust single-player options available as well. You can throw together an ad hoc game with a few CPU teammates and opponents for a relatively good time (the AI puts up a decent if not fantastic fight). Or, there is the the arcade mode, which pits the player against the CPU in a series of increasingly unfair matches. The CPU side gets a numbers advantage right off the start and the further you go, the more the odds slant against you. Asymmetrical courts, nasty obstacles on the opponent’s side, disgustingly small goal areas, and so on. Sometimes it’s fun to ice-skate uphill.

The only annoyances I found in Videoball were minor quibbles, like the lack of a back button in menus or an option to close the game on the title screen. A few of the more enclosed court layouts seemed to consistently get players trapped between walls and balls, ricocheting around like pinballs on bumpers for prolonged periods. Small hiccups in an otherwise fantastic experience.

Don’t sleep on Videoball. It might not be the future of eSports, but it is the future of several fun, sweary, elbows-in-each-others-ribs nights with your friends.