The rare act of generosity aside, support for WiiWare has been reduced to almost nothing, leaving the platform to shuffle along until the earth swallows it up. How fitting then that one of its few releases in recent months would revolve around vampires hunting zombies — the undead preying upon one another is the perfect visual metaphor for WiiWare’s current status.

Vampire Crystals is but a modest twin-stick shooter in the vein of Smash TV. It actually does one better than the arcade classic by allowing up to four people to play cooperatively or competitively. Fun in small bursts for anyone who wants to shoot up rotting corpses on a Sunday morning.

And after about an hour or so, it becomes both painful and painfully boring. 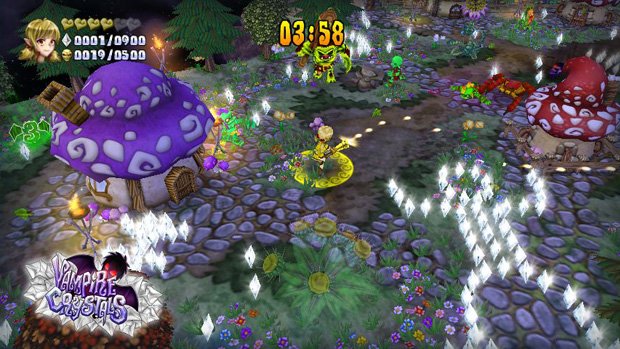 As you learn in the prologue, vampires and zombies have formed an amicable partnership in a place called Creepyland. This symbiosis is disturbed when the evil dragon Ghoros inspires the zombies to revolt, thus a pair of young zombie-hunting vampires must pick up their boomsticks and mow down their former allies through 18 levels across three worlds.

You can play with the Wii Remote and Nunchuk, using the pointer plus the B trigger to aim in any direction, but twin-stick purists will prefer the Classic Controller configuration. Simply tilt the right stick in the direction you want your bullets to fly and keep on pushing through the waves of foes. Very simple, very basic — it just works.

You have two objectives in each level: defeat a certain number of enemies and collect a certain number of crystals, both within the time limit. Aiding your campaign are randomly spawning weapons and items, from a Contra-inspired spread gun to hunks of ham that can distract enemies from attacking. The further into the game you progress, the better the selection of items become.

Every sixth level is a boss showdown, in which you must contend with a giant monster while also warding off an infinite swarm of minions. The boss’ own attacks are never as much of a headache as all the other action happening at once, so encounters boil down to how well you can distribute attention towards both threats while being mindful of the ever-present timer.

The game quickly falls into a routine of repetition. The levels themselves are enclosed arenas, and you’ll be running around in circles picking up freshly spawned crystals while avoiding freshly spawned baddies, over and over again until your eyes grow weary. I actually started nodding off in later stages, despite the unrelenting chaos. There’s simply no way any game can maintain such high intensity without burning you out.

When beset by throngs of skeleton warriors and goblins, the camera view often makes it difficult to properly see what your character is doing. On the upside, you can select one of three camera angles at the character select screen. On the downside, you can’t make adjustments to it once in play, minimizing the effectiveness of camera control.

Then there are the difficulty spikes that appear without warning. You could be breezing along fairly unimpeded and suddenly hit a wall of frustration. The second boss in particular is unlike anything else you’ll face in the game — it’s an ogre that can only be damaged from the rear, frequently enters an invulnerability state with the side effect of imbuing all minor enemies with enhanced speed and strength, slows your movements with ground pounds, and launches volleys of flaming boulders, all while monsters harass you and mutant plants spit rapid-fire seeds. It’s almost as though these challenges were scaled with multiplayer in mind, and to hell with solo adventurers. 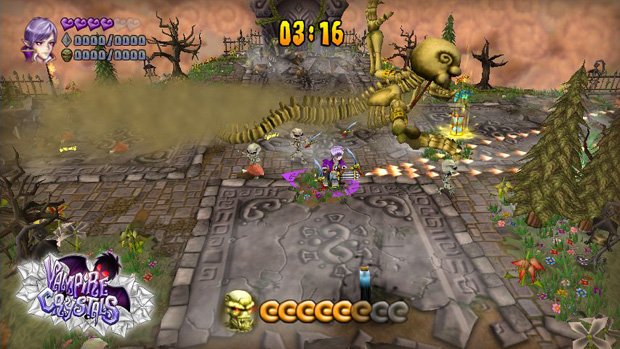 Speaking of multiplayer, there is no drop-in co-op, a missed opportunity for a title so firmly rooted in old-school arcade sensibilities. Even worse, solo and co-op modes have separate save files. So that ogre boss I just mentioned? If you invited a couple of buddies over to try to take the beast on together, you’d be surprising to learn you have to start all the way back in World 1-1. What excuse is there for that?

After beating the final boss, the story pulls a Ghosts ‘n Goblins and forces you to replay the entire campaign for the true ending, only now the levels take place at night and enemies are unfathomably more aggressive. I died three times during the revamped first stage before dropping the controller and saying, “No more.” Clearing the three worlds once only requires a handful of hours, but the tedium that sets in early on makes it feel like far more time has elapsed. There was no way I was suffering through all that again.

I can appreciate the classic arcade spirit of Vampire Crystals, but it does little to mask the shortcomings of old-school design while adding its own set of issues. Playing it single-player is chore, but convincing a group to play with you might be even more laborious. There just isn’t enough meat on these dusty old bones.