More of the same but that’s not a bad thing

Does the “second album” syndrome exist in videogames? If you’re not familiar with that phrase, it’s the idea that a band’s second album is much harder to make than the first. Should a band break away from the style it forged with debut or should its second effort explore new ground? In the videogames industry, a developer is usually charged with making a direct sequel to their first game, to just build on what came before.

Bastion, the first game from indie studio Supergiant Games, stood out from the crowd thanks to its sumptuous art style, haunting music, and approachable gameplay. Supergiant has followed up its debut with Transistor, which feels like a sequel despite an all-new setting and characters. 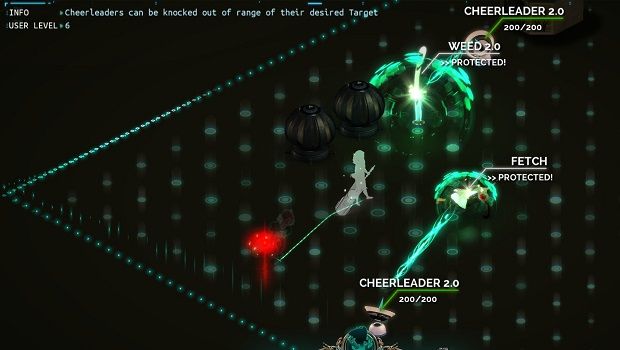 Transistor tells the story of Red, a popular singer from the gleaming future city of Cloudbank who is mysteriously attacked. Stumbling away from the encounter that has robbed her of her voice, she comes across a huge bladed weapon, the Transistor, embedded in a lifeless corpse.

The Transistor hosts the personalities of various individuals, all of whom give Red different abilities during combat, which she’ll need to fight off the waves of robotic enemies she’ll encounter. Cloudbank is undergoing a huge change. Almost all of the population has either vanished or fled for the countryside; the robots are changing the city but into what, and where did they come from?

Transistor most differs from its predecessor with its combat mechanics. Where Bastion was a straightforward action game, Transistor adopts a more strategic system.

Pressing the right trigger or right mouse button allows Red to pause time and set up a sequence of actions, like attacks or movements, which are then played out really quickly. Initially it feels like a slow experience but once you become accustomed to the powers of the Transistor and the strengths and weaknesses of enemies, you’ll be able to rapidly formulate a plan of attack.

Red can only set up a limited number of actions, so if there are still enemies present, she’ll need to use nearby cover and the Jaunt ability to avoid attacks. Taking too much damage will give Red an emergency turn but if that’s not enough to dispatch the stragglers, one of her powers will become overloaded and it’ll be unavailable until Red finds at least two access points later on in the world. These points are where Red can adjust her loadout and swap functions between passive and active slots.

There’s a great deal of variety as to how you can spec Red out since each function can be set as either an active function, an upgrade, or a passive function. For instance, the Clash function works as a short-range melee attack; if you set it as an upgrade, it’ll add a stun ability to whatever attack it’s paired with. Set it as a passive ability and Red will have a shield to protect herself from damage.

What’s really neat is that equipping functions in various slots will unlock information about the person they came from. It turns out all were major figures in Cloudbank life but all mysteriously vanished after coming into contact with a group called the Camarata. Another thing that is interesting is that robots will drops cells that will allow the enemy to come back to life, or spawn a new enemy type, if they’re not picked up quickly enough. 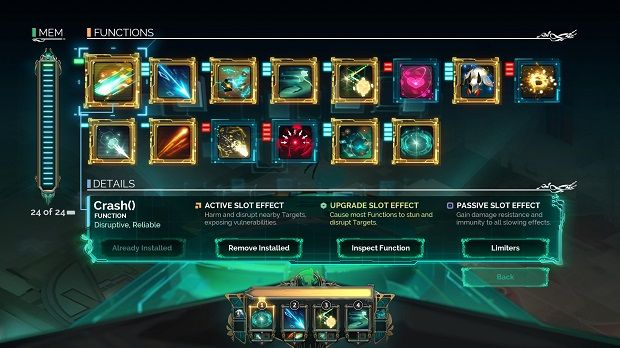 It’s a flexible system but it does have its drawbacks; since Red can only alter her loadout at an access point, you won’t be able to plan ahead and make changes for the enemy types you’ll encounter further on. You’ll just have to hope that whatever functions Red has equipped will be enough to do the job against whatever selection of enemies you come across next.

This is made even harder as during protracted battles, the Transistor can be stripped of its functions as they’re overloaded; this should be something that changes your tactics but it’s very rare to be at death’s door. Red will recover after every battle and really, it just makes these encounters last longer than they should, especially if you’re left with a single attacking option.

Despite enemies gaining new abilities as the game progresses, the battle sequences stick to the same formula: Red plans, then carries out the attacks, then dodges enemies as best she can whilst the Transistor recharges. It would have been nice to see some more options to take enemies on without using the planning phase; Red can use all of her abilities in real time but it makes much more sense to take advantage of the planning phase to execute attacks as Red can do extra damage by attacking robots from behind.

While Transistor initially feels like a whole new game, structurally it sticks closely to Bastion. Both games feature a beautiful but abandoned city that has undergone huge tragedy. In Bastion it was called the Calamity; in Transistor, it’s dubbed The Process. Both feature areas where the player can rest and take stock; Red finds special doors which take her to a deserted island where challenge rooms are located (much like the Proving Grounds in Bastion). If the game isn’t sufficiently challenging, Limiters can be installed that will make things harder for Red but at the benefit of gaining extra XP or other bonuses. These can be installed like Functions, swapped in and out at access points, but work the same way as the Idols in Bastion. 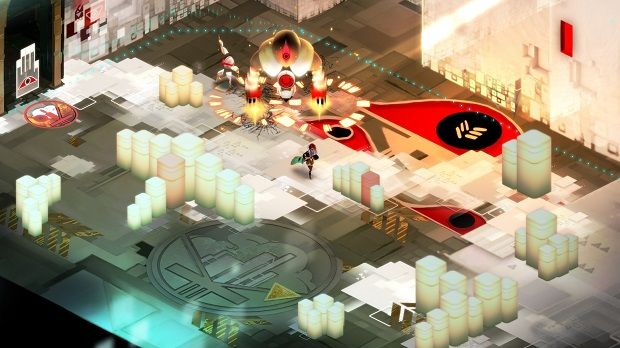 It feels unfair to claim that Transistor is just Bastion with a fresh coat of paint as there’s a whole new story, setting, characters, and the combat mechanics are very different. Jen Zee’s artwork is stunning as always, Darren Korb provides another set of great songs, and Logan Cunningham’s voice is center stage again, as the Transistor. It’s a different performance this time compared to the gravelly wisdom of Bastion’s Rucks — the Transistor starts off unsure of what it really is or how it came into existence.

There are a number of touching scenes later on in the game and plenty of small things that flesh out the world and show a good eye for detail. The combat screen offers helpful tips at the top left and various dialogue boxes fill in small details of what Cloudbank was like before the Process.

Supergiant Games hasn’t delivered a wholly new experience with Transistor but it’s still an enjoyable game that’s well made and has wonderful art and sound. The new tactical combat is welcome and there’s some real enjoyment to be had in tinkering around with all of the available Functions. However, if parts of Bastion left you cold, then you may find the similar structure of Transistor and its themes will have a hard time winning you over.

Still, it’s worth trying; the world of Cloudbank is a wonder to behold and the mystery of the Camarata, the Process, and the Transistor itself is something that is really worth exploring.