As I’ve said in the past, I consider myself lucky when it comes to meeting fellow gamers over the years that have had a positive impact on my life. I was fortunate enough to discover the Touhou series back in 2002 at the request of a friend, and given my existing love for the shoot-’em-up genre, it took it to the next level.

It’s been around a lot longer than that though, and finally, Playism is bringing the series to the West for the first time this year with Touhou 14: Double Dealing Character. Sadly, the way it  handled the port leaves much to be desired. 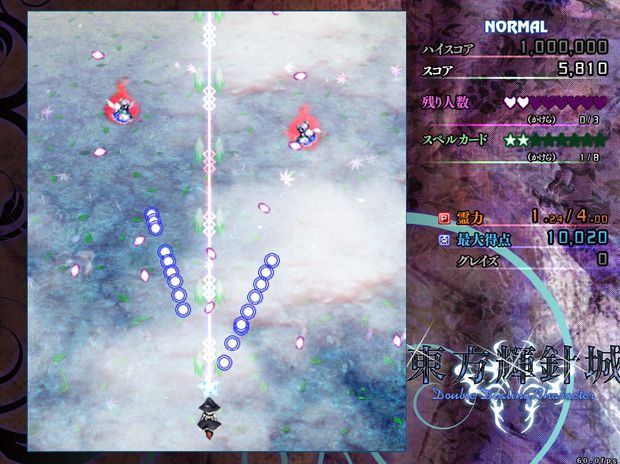 There’s no Texas two-steppin’ around it — the “Western” release is not a good port. There’s very little effort put forth at all, mostly due to the fact that it’s relatively untouched from the Japanese version, and it’s not translated — at all. Double Dealing Character‘s menus were already in English, but extra details and bits of the story are all in Japanese, so you’ll have to manually update it with an outside fan patch. When Playism announced that it was “bringing Touhou to the West,” I assumed it would be a little more than “we made it slightly easier to buy the original Japanese game.” Whether this is Playism’s doing or Team Shanghai Alice’s request, the result is the same.

The actual game, thankfully, is very good, and I must stress though that with the English menus, it is entirely playable. If you haven’t experienced a danmaku (also known as bullet hell or curtain fire) game before, the concept is pretty easy to grasp. Tons of bullets will litter the screen at all times (like a curtain), and it’s your job to maneuver around various patterns while firing back at your opponents. As is the case with most Touhou games, Double Dealing Character features a standard shot button in addition to one for specials, and a “slow” ability, which I’ll explain in a moment.

Where the Touhou team excels is in the presentation of it all. The bullet patterns are varied and constantly keep you on your toes, but they’re also coupled with a charming art style and catchy music. Double Dealing Character is no exception. It would be fun to read the various story bits that pop up during boss fights and between levels, but again, you’ll need a fan patch for that. Not being able to understand it all doesn’t fundamentally ruin the game, but Touhou fans are big on their lore for a reason — it gives context to the proceedings, and elevates the experience significantly.

You’ll have access to three characters, all of which have two different variations in tow. Each “ship” (in this case, a magical girl) has a different rate of fire or type of shot, such as a straight bullet or a spread. Specials add even more variety, like one character who uses a giant broom melee attack, or another who fires a deadly void bomb that slowly creeps up the screen. This is where the lack of a translation comes into play again — you’ll have to experiment with each variant since you can’t read what they do on the select screen.

Now, about that “slow” function I mentioned earlier — it’s another Touhou staple that spices things up a bit. At any time you can hold a button to make your character’s flight more precise, which not only shows your hitbox (a blinking light that displays where bullets can damage you), but changes up your shot type as well. Personally, I always map it to the left trigger, so I can comfortably switch in and out of it at will, and it works like a charm. Thankfully there is plug and play controller support, and it’s easy to customize your buttons.

Like most shoot-’em-ups, Double Dealing Character will last you roughly an hour your first time around, with six stages and an additional EX level. There’s also a few extras like a practice mode, music player, and some secrets that you’ll definitely need a guide or translation for. 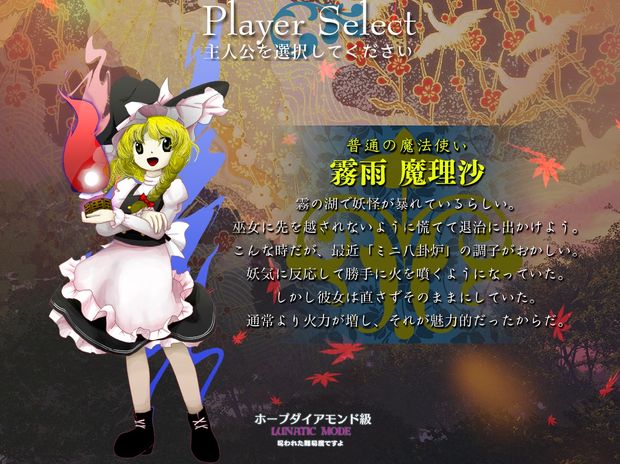 Playism may have made it easier to buy into Touhou, but the actual result isn’t anything better than just purchasing the game anywhere else. It you’re a shoot-’em-up fan and haven’t touched the franchise yet, you owe it to yourself to play at least one game in the series — so why not start here?