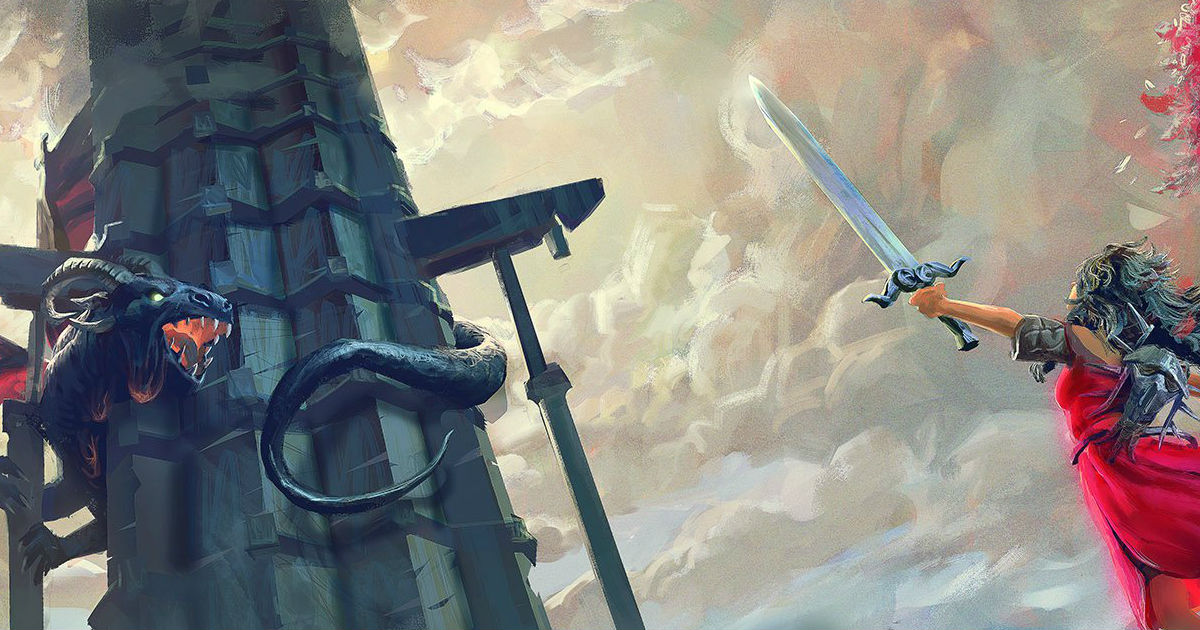 No, not the Warcraft race

When I first saw Toren, I was intrigued. It has a killer art style, and the concept of seeing a young girl grow up into a woman before our eyes to fulfill a mysterious destiny is an interesting premise indeed.

Sadly, not everything goes as smoothly as you’d expect, at least when it comes to the PC version.

Toren is a surreal game. You’ll start off as an infant, quickly growing into a young girl who is seemingly trapped in a giant tower without any real context. The story is primarily told through clever poems, which are never on the nose or in your face. It’s a good idea, as there are some awesome moments, like one specific event near the start where prose will shoot across the screen while looking into a telescope. Most of the narrative relates to the heroine and her direct conflict with a dragon, but a lot of it is also internal, and deals with the hero’s journey trope in a unique way.

It’s just a beautiful game inside and out, but it’s a bit rough around the edges. It’s not optimized very well on the PC, and even using a decent rig (NVIDIA GeForce GTX 880M 8GB, 8GB RAM, i7-4810), Toren was consistently sluggish on the two highest (and even on medium) graphical settings, among a host of glitches like falling through floors and the camera getting stuck occasionally. There also isn’t a whole lot in terms of menu customization, with a scant few resolution options, a fullscreen toggle, and a few checkboxes for motion blur and SSAO (screen space ambient occlusion).

Additionally, I had a lot of problems with controller support. Despite trying multiple times with both Xbox One and PS4 gamepads, the functionality would often break mid-game, or wouldn’t work in the first place. I can only assume it’s handled better natively on the PS4, but the PC port, which is the only build I currently have access to, has been a source of contention for me.

Gameplay-wise, Toren works on a three-button system — one for actions (attacking or grabbing, usually), one to jump, and another to “look.” Most puzzles involve rather simplistic platforming, but it must be said that the entire experience is just as soothing as the art style. In particular, I really like how the look button gives you vague hints without telling you directly where to go, and the solutions will usually have you saying “I can’t believe I missed that” out loud (in a good way).

It plays out much like your standard action-adventure game, with elements of free-roaming, puzzle-solving, platforming, and even stealth. In other words, it has a little bit of everything. Toren‘s jumping mechanics are a tad rough as they’re very floaty, but the development team keeps things simple, so you won’t be ripping your hair out too often outside of the aforementioned issues.

Puzzles include things like dropping sand into specifically marked shapes, snapping statues into place (like Resident Evil), and so on. Said stealth sequences are equally simplistic, mostly involving quick movements to avoid an omega-attack from the dragon. You’re not going to find a whole lot of cocnepts that aren’t already present in other adventure games, but they’re done well here.

Thankfully, every aspect simply feels connected and in its proper place. For instance, early in the game you’ll acquire a sword and turn into a young woman. Most gear acquisitions feel like an accomplishment with an emotional reward attached, rather than an item that raises your stats by a few points. These RPG-like mechanics are few and far between in favor of the more standard action-adventure elements, but welcome.

Toren is a very cool concept that’s held back by its rough presentation, especially on the PC platform. Truth be told though, I think developer Swordtales should keep making games and simply refine its touch, as the studio clearly has the knack for it.