♫ I knew you were treble when you walked in ♫

Do you live for the thrill of belting out your favorite songs whenever you’ve got five minutes to yourself? Are you an amateur singer looking for guidance, or a professional looking for something fun to brush up your vocal technique? Do you love NBC’s The Voice? Then go out right now and pick up Rock Band 3 or Guitar Hero 5. Or, get a karaoke machine and a vocal coach. Whatever the case, you’re going to absolutely loathe The Voice: I Want You.

But, you’re not going to hate it because it has a dizzyingly awful male version of “Hit Me With Your Best Shot” or embarrassingly haphazard song accompaniments that resemble Just Dance crossed with a slapdash lyric video on YouTube created with iMovie. You won’t even hate it because it features a startling lack of interesting or exciting songs to sing along to. You’ll hate it because it’s such an obvious money grab, an uninspired cash-in that exists solely to rake in dough from unsuspecting buyers looking to replicate the experience so many dream of having — standing onstage before The Voice’s celebrity judges and angling for stardom. 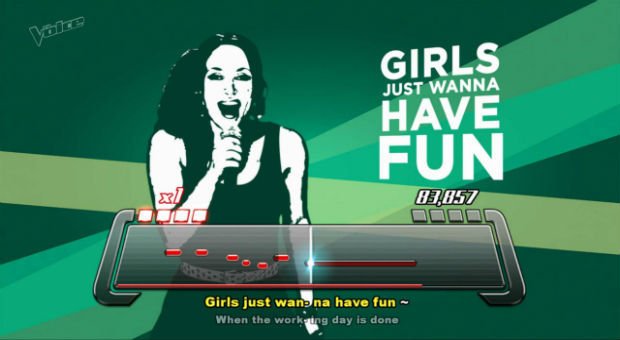 Perhaps a bit of background information is in order. I’ve played nearly every single karaoke title available to me. That spans the older generation of consoles up to the current round of systems — everything from Microsoft’s short-lived Lips series to Disney: Sing It. I also like to write and record song parodies. I don’t think I’m an excellent vocalist, but I have a smattering of gold ratings in Rock Band, namely “Stop Me If You Think You’ve Heard This One Before” and “Space Oddity.”

I’ve plunged the depths of musical despair with the karaoke app on Xbox 360, and I spent four hours at Duet 35 on my last trip to New York wishing I could live and die in that tiny room with phonebooks full of instrumentals music. And yet, while playing through this game, I found myself longing to return to titles that should, by all intents and purposes, be lesser games, like the Karaoke Revolution PlayStation 2 series or even Smule’s mobile Sing! Karaoke app.

It’s immediately apparent as soon as you begin the game proper that if you purchased the game looking to channel the vibe from the popular television show, you’ve been duped. There’s no sign of Christina Aguilera or Blake Shelton anywhere. There’s not even a Gwen Stefani or glimpse of Pharrell. It’s only you, faceless silhouettes that act as “judges,” and the cold of your living room.

It’s not as if the game is broken, however. It’s simply generic to the core, from its default WordPress template menus to its everyman and everywoman singers that accompany you during songs. You can head into quick play to choose from a meager listing of songs, check out Voice Coach mode for a slim selection of quick and dirty vocal lessons, or play a “season” that mimics the actual television show. If you’ve got friends over clamoring for a turn (and enough mics) you can play Party Mode with seven different players. The modes are surprisingly robust, and would be welcomed in any other game. 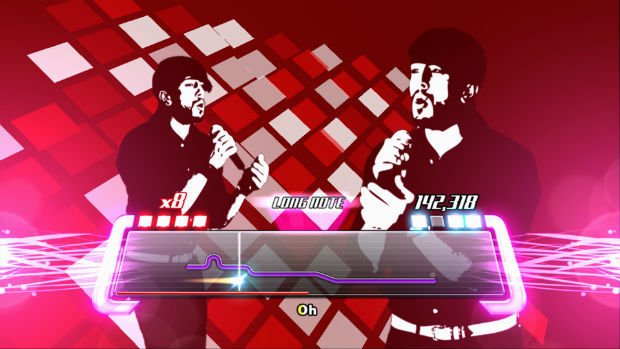 However, several different modes of play mean nothing if the track listing and songs themselves fall flat, which they do. Big time. Once you get started, you might notice there’s something a little off about the track list, which includes upward of 20-something songs — Alicia Keys’ “Fallin'” and the venerable “What Does The Fox Say?” rounding out tracks that both please fans of new music and obfuscate others. It’s the most random assortment of songs since Elite Beat Agents and its inclusion of Deep Purple’s “Highway Star.”

I couldn’t be sure whether the goal was to appeal to those who enjoy music straight off their local pop station or if these were simply the cheapest songs that could be obtained easily. For every “September,” you’ve got “Stay.” For “Girls Just Want to Have Fun” there’s “Hit Me With Your Best Shot,” sung by a male artist and completely altering the landscape of the song. It’s bizarre.

This was no doubt a move to keep things cheap on the studio’s part, but if asked directly, Activision might respond with the fact that cover songs help channel the spirit of The Voice on NBC, where several different singers take on tunes that aren’t their own. Either way, they’re embarrassingly low-quality. They would be serviceable covers if this were some sort of high school musical that couldn’t afford the real songs. When it comes to a game that judges you on pitch, phrasing, and how close you can get to the singer’s range, timbre, and vocals, altering the original song is absolutely unacceptable. 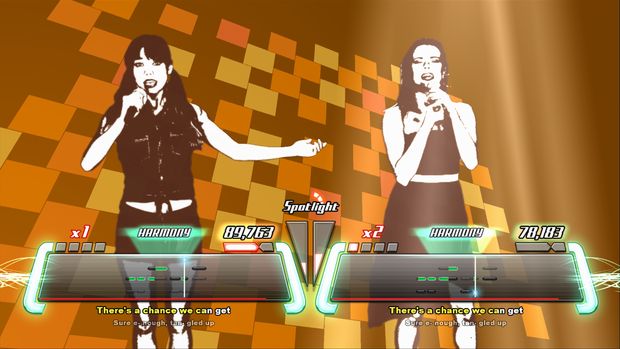 The cover artist can never match the nuances of the recording artist’s performance exactly, and if you’re meant to match the vocal tubes of each song to one you’ve heard hundreds of times over, you’re already being set up to fail. It becomes less about finding your own voice and more about mimicking a lesser version of your favorite tune. It’s painful.

With regard to vocal coaching, the “lessons” are simply laughable. You’ll receive such sage advice as breathing between phrases, what the notes in a song are like (long and short!) and “advanced” topics like implementing vibrato. It’s understandable if you’ve  never sung before, but the coaching mode is so rudimentary that it’s unfair to even call it coaching. It’s a series of text and accompanying examples to “practice” with. You’d be better off looking up videos on YouTube of proper breathing techniques and scale practice. Besides, the only feedback you’d be getting within the game is what the game can match to your vocals with the included microphone.

Playing a season is just as underwhelming, where coaches “competing” to have you on their team amounts to a few simple exclamations of “That was a solid performance!” and similar airy quotes coming from a set of “professionals” assigned to a specific music genre. They may as well all be the same person, and your only real input when it comes to having them choose you over AI-controlled opponents is, well, singing the song. Match the correct pitch at least some of the time and you’ll be golden. There’s no real reward for participating in a season, and the different qualifiers mean little more than the fact that you sang a song and managed to not fail. Congratulations? 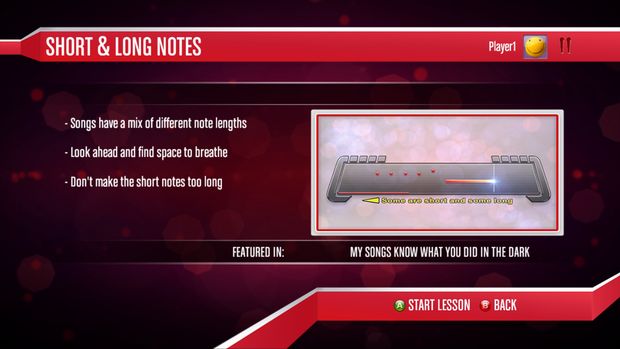 What’s frustrating is the fact that The Voice: I Want You could very well have been a decent game. It had every opportunity to take what it was given and work with it. Even simple tweaks, such as improving the quality of the vocal covers or offering better and more nuanced coaching would have improved it tenfold.

As it stands, The Voice: I Want You is a title that you may be able to spend about an hour with before reaching for something meatier in the realm of singing games. And, when you’re seriously considering going back to the American Idol karaoke titles on the Xbox 360 because at least Simon, Paula, and Randy were included in the game, there’s something very, very wrong happening. Pass up the The Voice on consoles and just catch it on television. Or, sing in the shower. You’ll get more out of it.