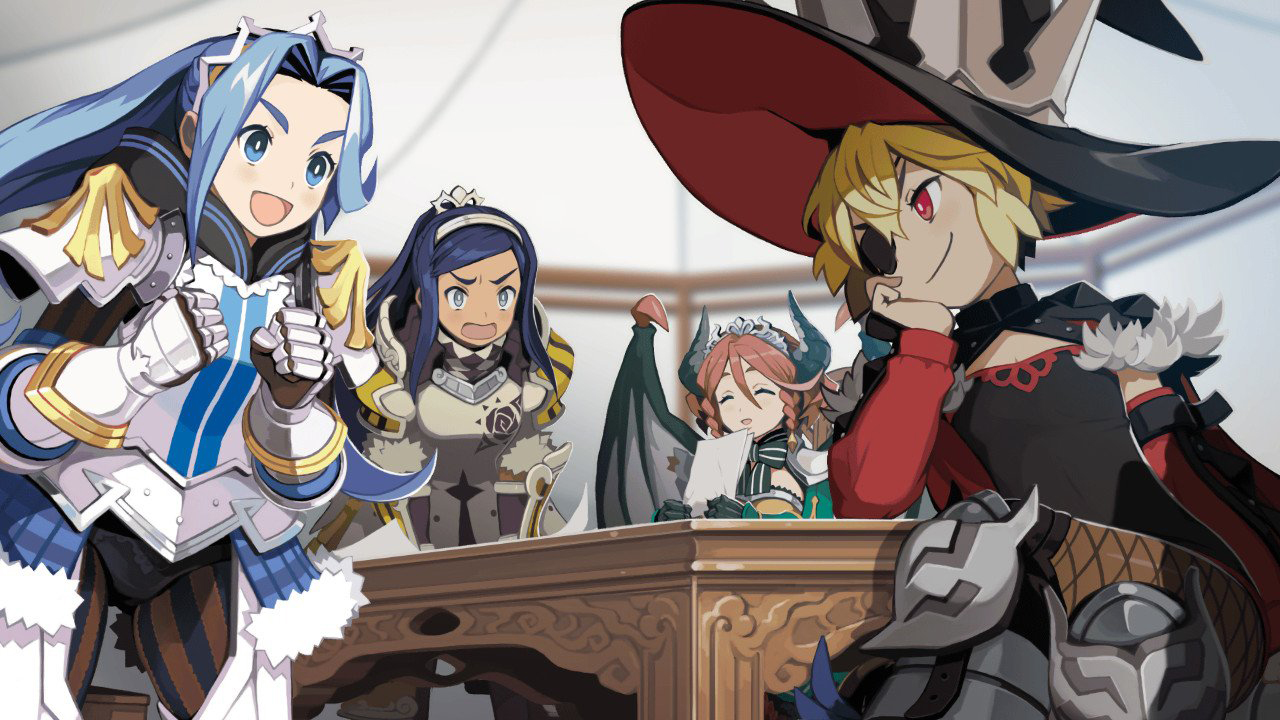 One of the things I quite enjoy about Nippon Ichi Software is it’s always willing to try new things. Each year, you can depend on the developer-cum-publisher to release one or two titles that are completely unique from everything else in its catalog. Sometimes, those games are a surprise success. 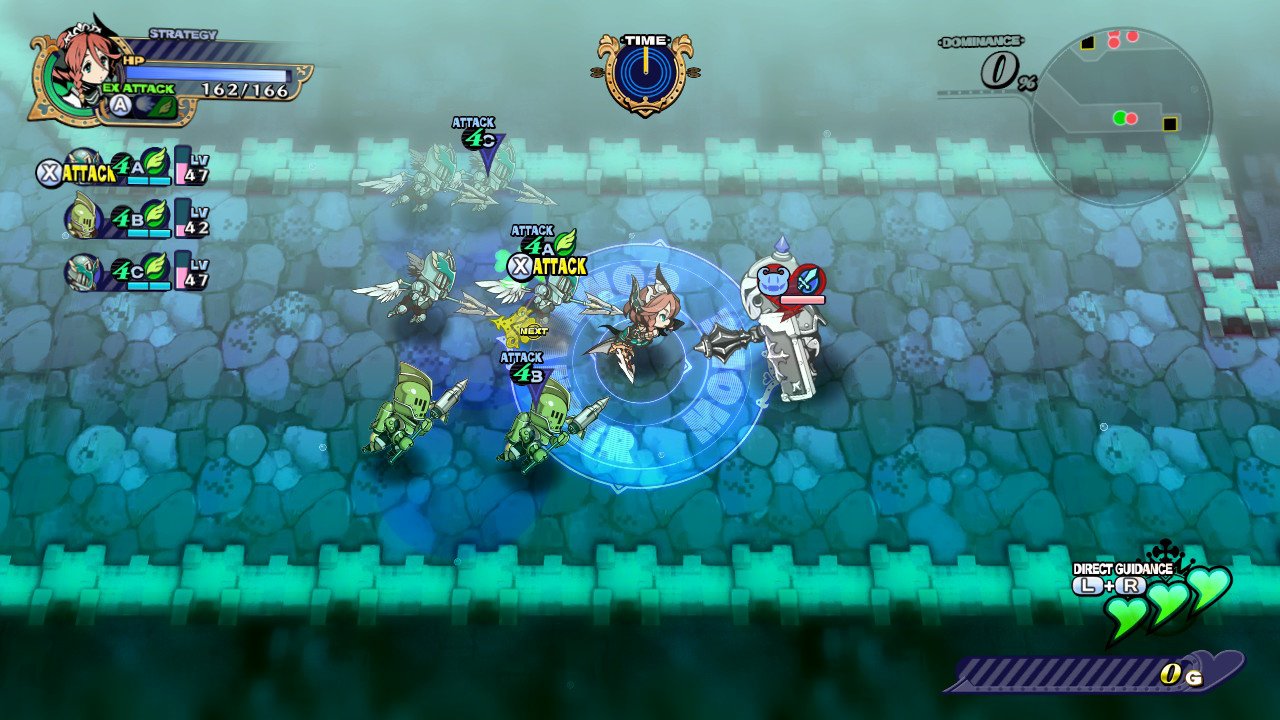 The Princess Guide casts players in the role of a seasoned warrior looking to step away from the battlefield and begin their life anew as a mentor. With books and various articles written about their exploits, the warrior is well known throughout the kingdoms and right away they get the opportunity to train four princesses from four different regions. There is the voracious Liliartie, the cruel Veronica, the humble Monomaria, and the spiritual Alpana, who I’m pretty sure is trying to start a cult. No matter which princess players choose, they’ll actually get their hands on all four of them, as well as the mentor, as they work to complete quests and guide the girls through their individual storylines.

Each girl also has her own individual fighting style. Monomaria is armed with a Gatling gun blade that damages foes near and far, Alpana zips across the screen striking down enemies with her twin daggers, Veronica casts spells from a distance, and Liliartie is quick with her axe. When you include the mentor and their sword, players will have five different fighting styles to become accustomed to and they’re unique enough that I had to actually change my approach to each mission, depending on who I was controlling.

While The Princess Guide has the look of an action RPG, the best way to approach this game is to treat it as if it’s a shmup. There is no block or shield function available to players, and refreshing health is limited, so the best way to survive each mission is to avoid taking any damage at all. That can be difficult to do. Often times, the game will overwhelm the screen with enemies and it can be easy to lose track of your character, let alone see if a creature is about to attack. While every monster in the game has a “tell” of when it’s about to strike, it’s not always obvious and can be easy to miss.

During each mission, as long as you’re not playing as the mentor, you have the ability to praise or scold the princess you’re controlling. Either choice will enact a change that could help lead you to victory. For instance, if she’s low on health and you praise her, she’ll regain a good chunk of her HP. If she’s good on health but surrounded by baddies, scolding her might pump up her attack power to overcome the odds. It’s an interesting system, but honestly, I just used the praise function whenever a princess was low on health. With items barred from use during missions and very few options to restore HP, I saw the system as more of a last-ditch effort to save my ass rather than how I believe the developer’s pictured players using it.

It’s not just the princess health I have to worry about. During each mission, you’ll also have limited action to a squad of up to six footsoldiers. As you progress in the game, you can recruit different soldiers to your team, but the default grunts for each princess are actually pretty decent. They have two attacks: a limited use special attack and a group rush attack that can make monsters woozy, allowing you to strike them down with your far more powerful princess. There are different soldier formations to mess around with, but honestly, this feature didn’t get much use out of me. I primarily focused on using my soldiers to take over relics.

Each mission map is littered with different relics players can commandeer. The one I was most thankful to see in every mission was the mana statue that refilled my squad’s health. Most other relics are traps that can hurt you until you take them over, at which point you can control them to strike your enemies. It’s a pretty clever gimmick and leading a squad of monsters to your thornbush that’ll take them out is a real Pied Piper moment. My favorite memories from the game all involve me leading a group of enemy soldiers directly into the line of fire for a laser beam I have control of and watching as their bodies fly.

The mentor and princesses also have their own special attack and I really like how this feature is implemented. Special attacks aren’t restricted to individual characters, rather they’re attached to the gear you acquire. Gear can be equipped to anyone, so for the longest time, I was just pairing each of my characters with the strongest equipment available. However, strong gear might not mean a strong special attack, and as you get further in the game, you may have to really think about which gear is most useful for the task at hand rather than which is the strongest in your arsenal. 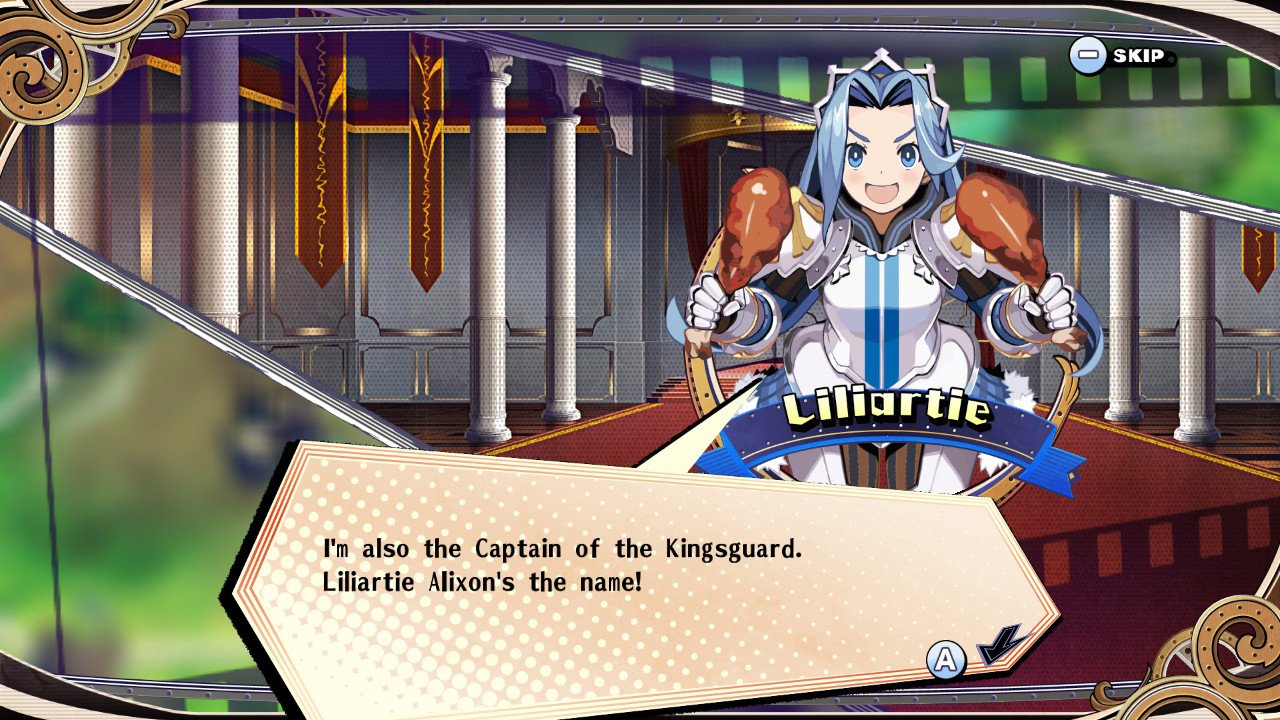 All of what I’ve mentioned above, I really like about this game. It’s a unique take on the action RPG genre with a fun hook and a decent-for-NISA story. The problem is, the game all of this is attached to isn’t very good. Some features, like the save system, are archaic, while others, such as the materia system, aren’t explained all that well. The Princess Guide did crash on me once, losing about three hours of progress, and on more than one occasion, it said I had failed a mission even though I most certainly did not.

One instance that stands out in my mind happened early in the campaign. I was tasked with protecting a building for a certain number of in-game hours. Right away, the building was attacked by monsters and I fended them off, winning the battle. The building was attacked by another group of monster and again I fended them off. I was told I was successful, and then promptly failed the mission. It didn’t make a lick of sense.

In addition to those random fails — which I’ll admit only happened to me three times during my playthrough — the smaller and more repetitive issues really stuck in my craw the longer I played. There is an inconsistency on how much time at the end of each mission you get to collect any coins or chests lying around. Certain missions are unreliable when it comes to spawning enemies and I nearly failed one because it wasn’t pumping out demons fast enough. The button that activates the group rush attack is the same button that takes over relics or uses one you’re already in control of, leading to quite a few mishaps when I was completely surrounded by relics and enemies.

The relics, for as good of an idea as they are, are poorly implemented. There is no rhyme or reason to their placement and The Princess Guide doesn’t do a well enough job of spacing out those healing statues. For most of the game that isn’t an issue, but the difficulty curve here is so haphazard, so unpredictable, that their poor distribution can really bite players in the ass. Most of the missions found here are an absolute breeze, but when I started hitting the late game content with its cruelly unforgiving difficulty, I really began to question the design decisions for this game. 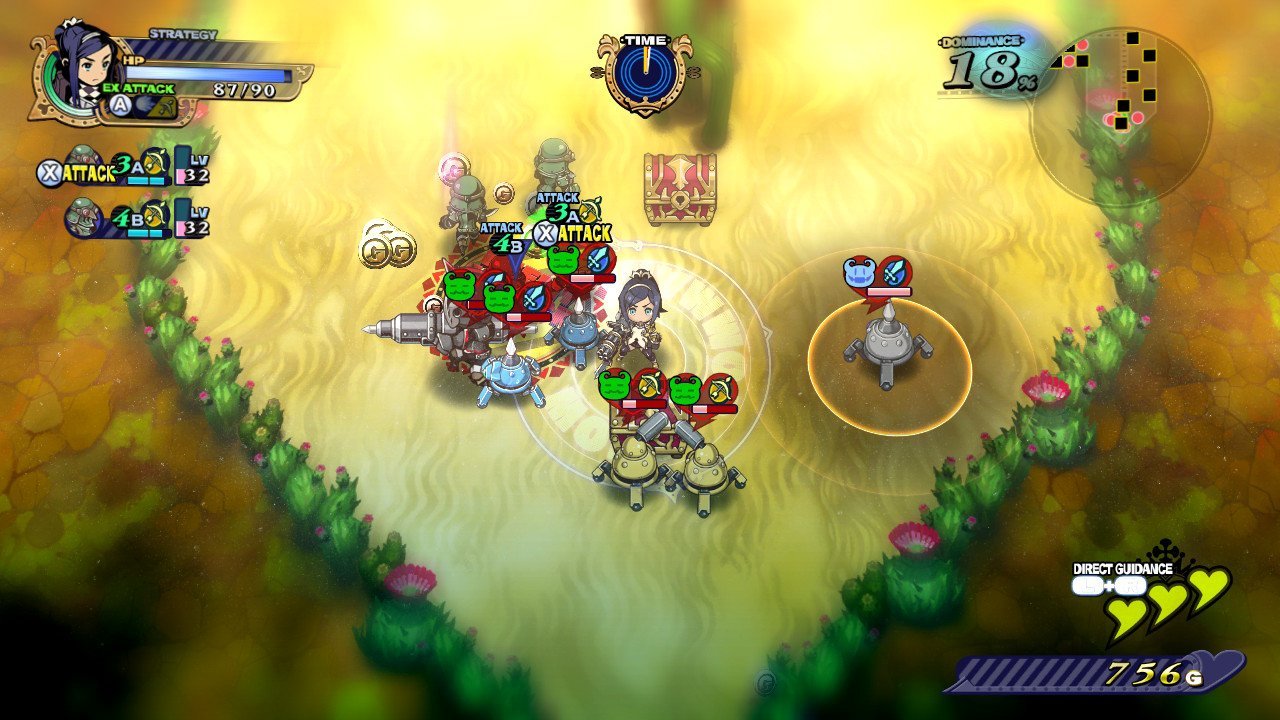 As I mentioned earlier, there are no items you can carry into missions, so you’re at the mercy of what you can find in each map. It’s not uncommon to go a great deal of time without healing up, and with groups of enemies attacking all at once, damage comes swiftly. Later enemies absolutely soak up your attacks and can be quite the nuisance. One late-game creature is just an egg that is tiny, hard to hit, and takes a lot of strikes to kill. Some mid-boss fights will absolutely decimate your footsoldier squad, and once a soldier is killed, you don’t get them back until you withdraw from a mission back to home base.

Some of the difficulty issues I encountered were able to be overcome with a few hours of grinding, but I don’t think The Princess Guide is the type of game that should be pushing players to slowly level up their squads. There isn’t much variety in the mission structure or enemy choice, so a lot of battles end up feeling like a rerun. Others are just straight-up repeats of encounters I fought moments before, down to the same dungeon layout, enemy choice, and placement of relics. And while I am encouraged to run through this game with each princess to get their individual endings, once through is honestly enough for me.

The Princess Guide is a game I enjoy less and less the more I play it. There is a sound structure here and some really clever ideas, but the weight of all its small issues really burden what should a fun and frivolous experience.