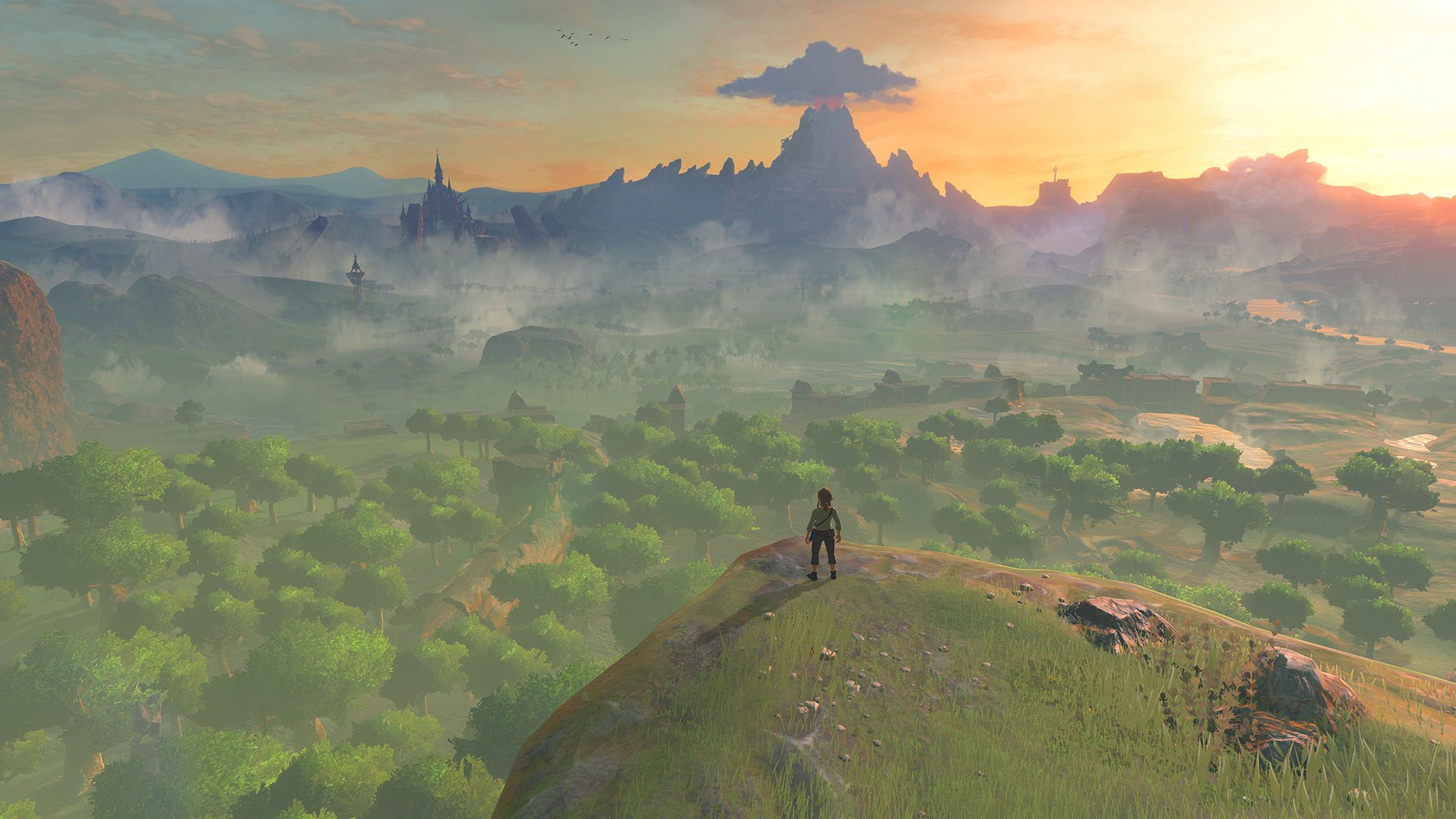 Link to the Future

For many years, Nintendo simply didn’t know what people wanted out of a Zelda game. Originally Wind Waker was going to feature a traditional “realistic” art style, but the creators got worried that in the increasingly competitive market they wouldn’t stand out — so Toon Link was born.

It sold well but many fans reacted negatively to it at the time, causing them to shift back into realism with Twilight Princess, which, subsequently, people also didn’t like, having finally come around to Wind Waker.

To some degree Skyward Sword tried to marry the two styles, but The Legend of Zelda: Breath of the Wild rights so many of the wrongs that game committed.

My relationship with the Zelda series is public record. The original was one of my first adventure games outside of Dragon Warrior, and subsequently, each release has bookended a specific point of my life. Yet, I don’t care for a number of games in the franchise, especially the last two mainline Zeldas: Link Between Worlds and Skyward Sword. It’s a weird relationship, I know, and it’s why I was so surprised that Breath of the Wild walks back a lot of the boring or bad strides respectively that the series has made lately.

There’s a much bigger emphasis on your emotional connection to the world of Wild. It embraces the timeline theory without being held hostage to it, or being too tongue-in-cheek and meta about it. Wild has some depressing moments that fit and accent the level of desperation that usually comes with being the Hero of Hyrule. Voice acting assists this emotional angle, and no, it’s not overdone. There’s still plenty of “hooos” and “haaahs,” when speaking to NPCs — that adorable gibberish talk is alive and well. Thematically, the effort to turn it into a far future-type Zelda while still remaining true to the adventurous medieval roots is admirable.

As more threads start to unravel, the narrative never feels overbearing and doesn’t overstay its welcome. I can’t tell you how many times other games have done this, where it feels like I’m stuck in one boring town or area while folks barricade the gate and yell “you can’t leave yet, your business isn’t finished!” Which leads me to Breath of the Wild‘s most paramount virtue: freedom. While the first hour (or much less if you know what you’re doing) is technically a tutorial zone of sorts, you’re given a gigantic land mass to play around in, where the game proceeds to hand out most of your abilities — then sends you on your merry way to the true open world with no strings attached. It beats the crap out of wrestling farm animals for an hour.

Wait, what? Most of your abilities? Yep. I know what you’re thinking. “What about the tried-and-true Zelda formula where you enter [x] dungeon and get [x] item?!” Well, that’s thankfully gone, as much as I’ve enjoyed it in the past. A Link Between Worlds dabbled in this concept with item renting, but Breath of the Wild blows the doors off that idea with an amplifier that goes to 11, jumps off the stage, and crowd surfs. You do accrue [mostly combat] spells of sorts from clearing each core dungeon (there’s four, with an optional fifth that grants no powers), but for the most part, you’re equipped with the following Runes — two different kinds of bombs (round and cubed), a glider, stasis, a giant magnet, a camera, an amiibo summoner, and a spell that creates blocks of ice in water — all governed by a cooldown timer.

While I won’t spoil how all of these spells work, suffice to say there are multiple uses for them, and new scenarios that Breath of the Wild keeps chucking at you at a rapid pace. Even if you think you know how bombs have worked (or have always operated within the confines of the series), there’s usually a surprise waiting for you at the next shrine (read: small challenge rooms littered about the overworld). Initially, I felt underwhelmed that Nintendo went this route. I kept thinking that I had missed a few abilities early on, as I would enter shrines and have no conceivable way of completing them. But I was wrong.

Hours later I entered my first dungeon, and was able to use an item I had picked up in the first 15 minutes to solve a puzzle in a way I didn’t even think to try previously. I went back to that pesky shrine and cleared it with a smile on my face. This is how open world games should work. Not with and overabundance of checklists and millions of map icons to clear for achievement points — but with a design that feels legitimately interconnected and fluid in an all-encompassing way.

Breath of the Wild isn’t just “open” in the sense that you can roam around. It has more RPG elements than any game in the series, with a litany of gear and items to find. The scale is so massive that over 60 hours in, I’m still discovering new ingredients to cook with items I’ve never seen before. With a dedicated jump button (hi Adventure of Link) you can climb up just about any mountain and leap off the top (one of my favorite pastimes). Seeing fast travel and radio towers come to a Nintendo game is a little weird, but they own it, and naturally, are host to their own little puzzles. Nothing, even the few borrowed concepts, are half-measures.

It’s hard to convey just how free Breath of the Wild feels on paper. Once I spent half an hour chopping down trees, and I had no idea what I could even use the wood for. I pulled out a real pen and paper and jotted down recipes I had discovered, and experimented for another 30 minutes to find the perfect concoction. I pulled up the in-game map and stamped areas I wanted to return to later, even if they weren’t hosting any specific quest or reward. Many times I entered an area by way of an alternative puzzle solution, and not the primary method the designers perhaps intended for me.

The dungeons, which I suspect will be a point of contention from folks who want everything to stay the same (I can see the thinkpieces in my head), also encapsulate this philosophy. They’re much more compact, and are almost exclusively based on puzzle-solving outside of the final encounter. There’s no “bide time until you get [the hookshot] and then use it to solve every puzzle the rest of the dungeon” formula — you’re using everything you picked up at the start, which includes the aforementioned multi-use array of puzzle-solving tools.

Fi isn’t there to ruin the solution. There’s no forced tutorial section directly after you defeat a miniboss and pick up the new “dungeon item.” The dungeons feel like an extension of the open world itself, as do the shrines. Everything funnels back into every other aspect of Breath of the Wild in a deliberate fashion. You aren’t just earning new Heart Containers or pieces of loot, you’re acquiring knowledge. By the end of the game I felt like a superhero, and traveled across the world in search of shrines to complete.

A world, mind, that’s mostly stable. There are some framerate drops, even on TV mode, in several areas. I have a feeling people are going to be up in arms about it, but for me it didn’t occur often enough to truly have an impact on my fun. That’s because I care more about the draw distance honestly, which is so well done that it hits that chord of “I see that place in the distance, and want to go there” more than any game I’ve ever played. While towers are usually just throwaway bits that unlock more map icons, I would frequently revisit them just to scout for new places to explore for the heck of it.

Combat is also simple enough where you aren’t worrying about iFrames or precise rolling, so the occasional dip isn’t as crippling as, say, a pure action game. Motion controls for projectile aiming are also incredibly precise, and best of all — optional. There’s some semblance of the advancements made on the Wii and Wii U, but they’re not forced. I love it! I thought I would hate juggling items with the new durability system, but it’s fun to try all the different types of weapons. Much like the game’s puzzles you can approach combat in multiple ways, with stealth or item-based solutions, and the choice to wield an axe, staff, one-handed sword, magic wand, boomerang, or a bow play into that.

I thought the Joy-Con Grip (which is basically two Joy-Con controllers slotted together) would feel underwhelming too, but I got used to it in less than an hour. Equipment selection is handled with the sectioned d-pad like C-Buttons, and the motion controls work great. As an aside I did not have access to a Pro Controller for this review, but will have one going forward after I buy one when the game officially launches.

By the time the credits rolled (and I was back outside of the final fight with a star next to my save file, New Game+ style), I was about 40 hours deep. But there’s over 100 shrines to find, several superbosses to fight, hidden gear to locate, and optional mini-questlines, so I’m going to be busy for a while longer. Speaking of extras — in case you’re wondering, the amiibo support is mostly harmless. You get some extra items you can otherwise find in the game, or some Easter egg type stuff that isn’t overpowered (you can find armor in the first few hours that is better than most of the figure boosts). The Wolf Link companion does feel like a massive thing in the form of a bite-sized paid piece of DLC, but I don’t feel like it was necessarily “cut.” A massive 100 hour or more adventure makes this choice easier to digest. If the figures were scarce I’d be angry, but they’re widely available.

The Legend of Zelda: Breath of the Wild has very little wrong with it. There’s the occasional framerate drop, a short stealth sequence, another short escort bit, and a few bosses that are fine, but aren’t as memorable as they should be. They’re going to be the main talking points as folks break the game down over the course of the next year (and decade). But those moments were quickly erased from my mind given the rapid-fire pacing and promise of returning to the sprawling universe. I flipped dungeons 360 degrees and walked on their ceilings, and never once was frustrated. I found an island where a deity stripped me of my items and challenged me to solve various riddles so I could get my gear back. I fought optional world bosses, explored labyrinths far off the beaten path, and gradually learned how to tame horses — none of which are handed to you on a silver platter.

This isn’t your typical boiler plate open world cash grab, rife with to-do lists and busywork. Zelda: Breath of the Wild is an evolution of the formula for both eastern and western philosophies alike, and a new blueprint.