This one is just about a bogey

While I’ve always been fond of playing shooters, brawlers and action-oriented games, one of the joys of my teenage years was kicking back with Tiger Woods PGA Tour with my best friend. After intense rounds of Unreal Tournament 2004, we’d stop and shoot 18 on St. Andrews in whichever year was the latest for EA’s big-budget sports series. It was a great palette cleanser after eviscerating foes online.

With EA having basically washed its hands of those games and no other major studio picking up a golf title, the lack of Pebble Beach and TPC Sawgrass in my life has been tough to deal with. I can always go back to an older EA game, but the advancement of technology should surely mean we could have a dream PGA game by now.

For many, HB Studios’ Golf Club series has picked up that mantle, but I was never quite sold on it. The lack of my personal favorite courses and any official endorsement left a bad taste in my mouth which was then confirmed by subpar user reviews on Steam. With news of The Golf Club 2019 nabbing the PGA license, though, things were starting to look up.

Sadly, this latest entry (published by 2K) has basically found itself stranded in the rough. 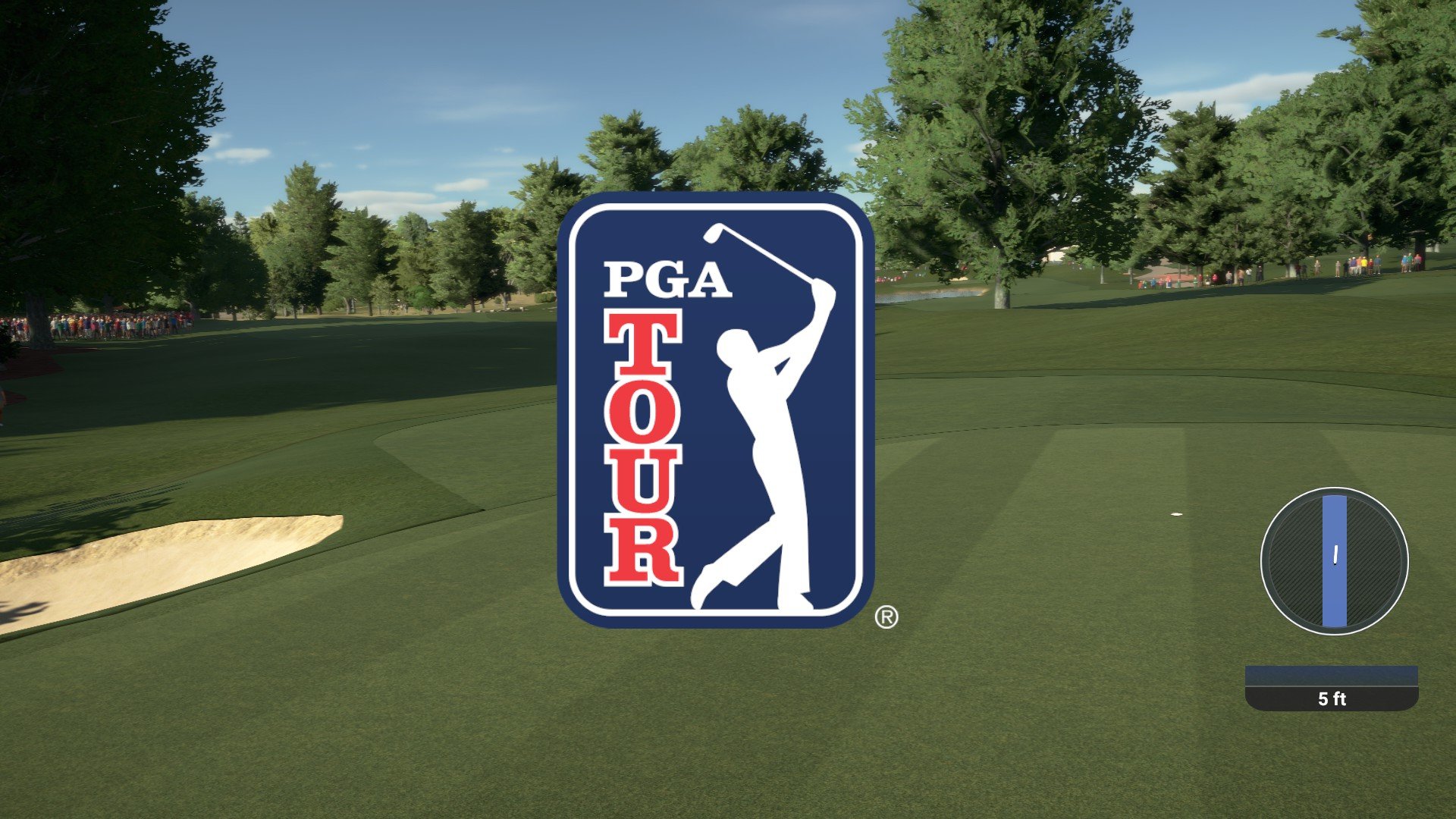 First impressions of The Golf Club 2019 don’t really do it any favors. The splash screens when booting the game are so abrupt, I honestly wasn’t sure if I was playing a beta or not. It doesn’t get better when the game eventually reaches the menu system and everything feels so unintuitive. Specific options are accessible via a tiered list and you can even click on menus to the left and right without scrolling to them first. It isn’t a great look.

Once you step into the character creator, you start to see where all the effort went. The Golf Club, as a series, has prided itself on user customization and the character creator is fairly robust. There are still certain key features missing (like muscle tone sliders or many clothing options), but you can make a reasonable facsimile of basically anyone with the options available. It helps in giving you an extra layer of immersion into the realistic world HB Studios has created.

Step away from that creator, though, and that world comes crashing back down. The tutorial for The Golf Club 2019 is one of the worst I’ve seen in a long time. It certainly talks about all the features that this game offers, but I can’t say I learned anything from it. My knowledge of how golf works is from my years of experience with Tiger Woods PGA Tour and having actually swung a golf club in real life. If I went solely off of what is contained here, I’d be lost.

There are a lot of options to the controls in The Golf Club 2019, but you won’t learn it from the short practice session. Getting actual club time in is where you’ll start to get a feel for how this game works. Even after 15 hours, I’m quite shocked at how inconsistent and unrealistic The Golf Club 2019 plays. I know my past golf simulation experience was a heavily calculated version by EA Sports, but this is off.

For starters, the suggested clubs on each stroke should be ignored at all times. Despite a green being 20 feet above you, you should always go down clubs since accuracy is all over the place. Making a chip shot from just outside the green sees your ball roll an additional 30 feet past the hole, almost as if it were dipped in grease and is sliding across a tiled floor. Putting is also hampered, with the curves and dips of each green sometimes not factoring into where the ball will roll.

It doesn’t help that The Golf Club relegates its swing mechanics solely to the mouse or joystick. There is no three-click option available to replicate a more arcade-like golf game (such as Hot Shots Golf or Mario Golf). I understand the desire to create a punishing, authentic representation of the sport, but nothing about these ball physics seems accurate. Long drives shouldn’t see a ball hit a hill and then bounce 15 feet into the air. 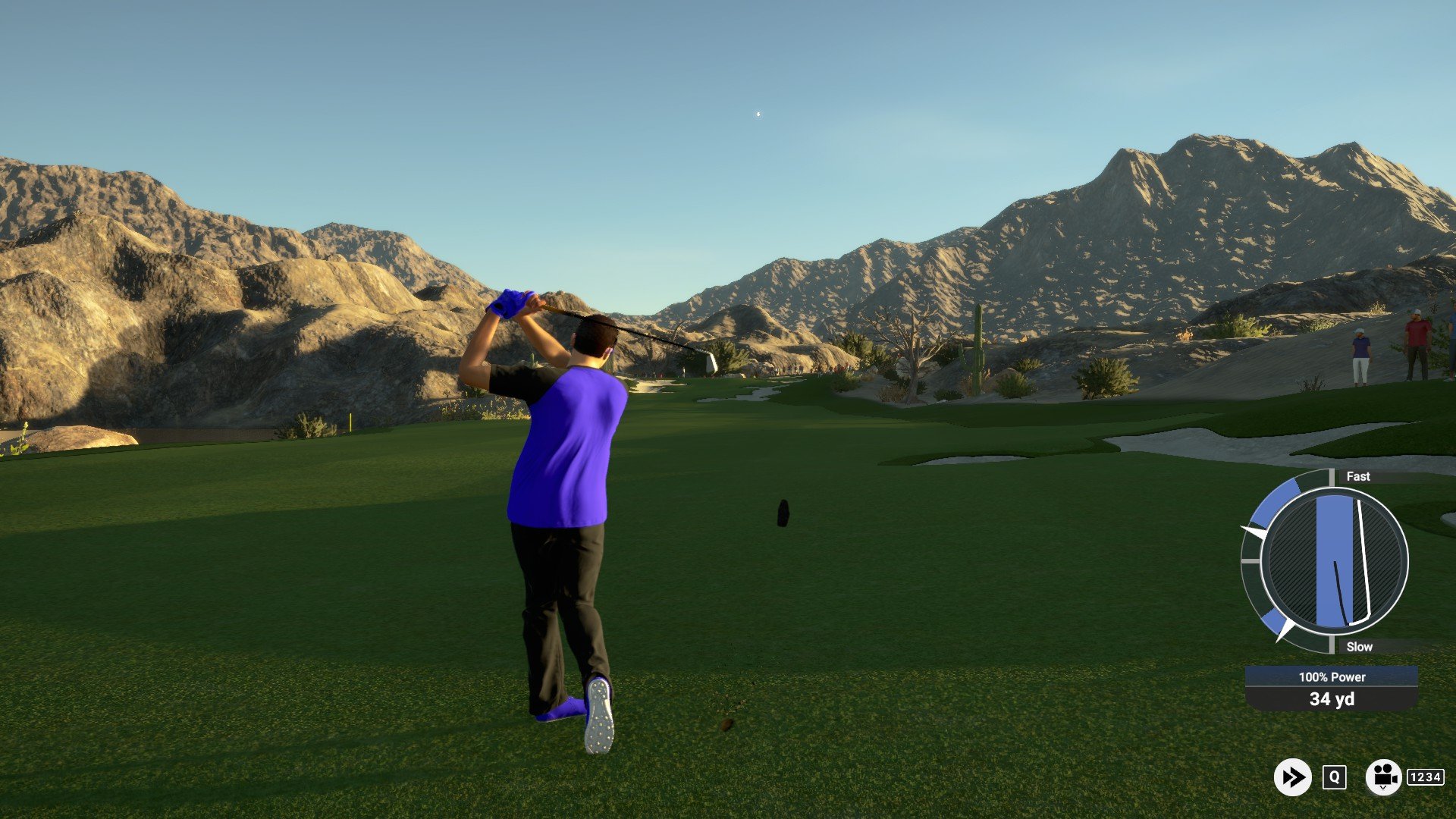 I could almost get over the lack of accessibility options, but the swinging, itself, is just too inconsistent. I could not come to terms with how the gamepad wanted me to make shots, but using the mouse resulted in sometimes driving straight down the fairway and other times careening far to the right despite 15 MPH winds blowing to the left. This is all because accuracy is dictated by a shot bar that will shrink or expand based on whether you’re going up clubs or adding draw/fade to your shots. If your swing goes outside of that bar, your shot is going to be screwed.

Making matters worse is that the ball appears to magically shift position based on where you swing in relation to that bar. I understand that real golfers can do some pretty wild things with their shots (such as having dramatic cuts that then slice back into the center), but I swear the ball would magically shift to the right from the tee before release. It creates scenarios where you’ll be performing consistent swings, but then the game just decides it’s time to muck things up.

As if to put the cherry on top of the meh-sundae, even the PGA Tour endorsement isn’t properly implemented. All that fancy marketing has resulted in a whopping six official courses being added and with the tournament mode failing to make note of any professional players. You won’t be seeing the likes of Tiger Woods, Rory McIlroy, Phil Mickelson, or Justin Thomas, though actual players would need to exist for that to happen. The Golf Club 2019’s career mode is a completely solo affair. 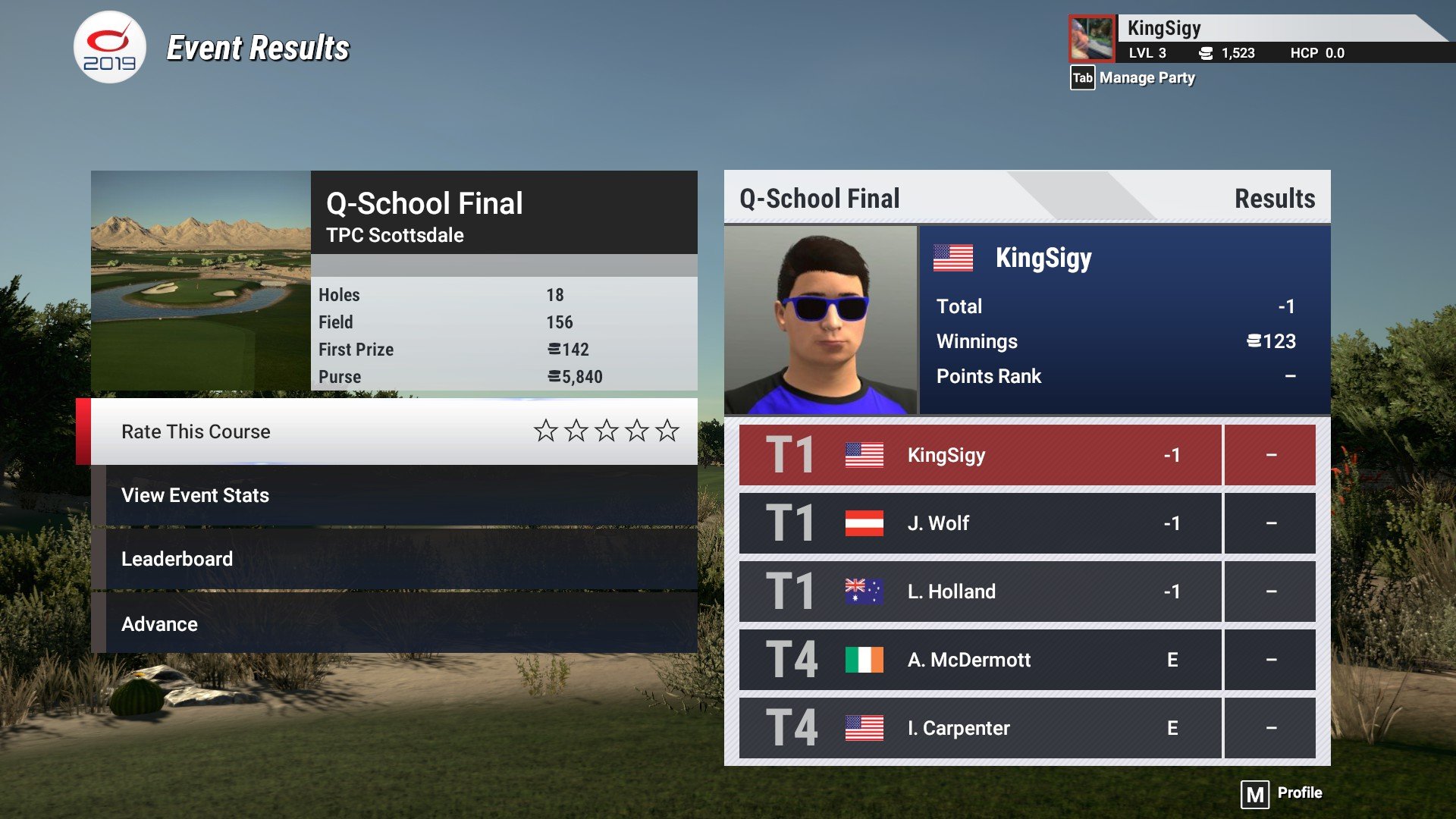 Rivalries do technically exist, but those never result in shootouts or skins matches. Everything in the career mode is just you playing 18 by your lonesome and putting up a score on a leaderboard. You’ll be repeating courses in no time since the official list is limited. You’ll also likely fail to make it past the first tour on your initial attempts due to how inconsistent the mechanics are, leading to more repetition. Even if you chalk that up to being bad at golf, the lack of attention to the PGA’s official rules is plain odd. Hitting your ball onto a beach should result in you taking a penalty stroke, not just playing from the sand.

I need to make special mention of the lackluster commentary because it gets particularly grating. I understand that HB Studios didn’t hire professionals, but the voice clips on offer are just plain bad. One guy isn’t even present for half of your round and the main guy will throw in head-scratching comments like “That’s just about a bogey” or “that shot was excellent, but then it wasn’t.” If the idea was to replicate an ESPN broadcast, The Golf Club 2019 utterly fails.

Is anything good about The Golf Club 2019, then? Actually, there are a few features that could potentially save this game for many. Multiplayer works very well and even contains differing rule sets to help you create a less sterile environment (actual players can be on the course with you!). Along with that, the course creator feature is one of the best I’ve seen in any title this side of a god game. 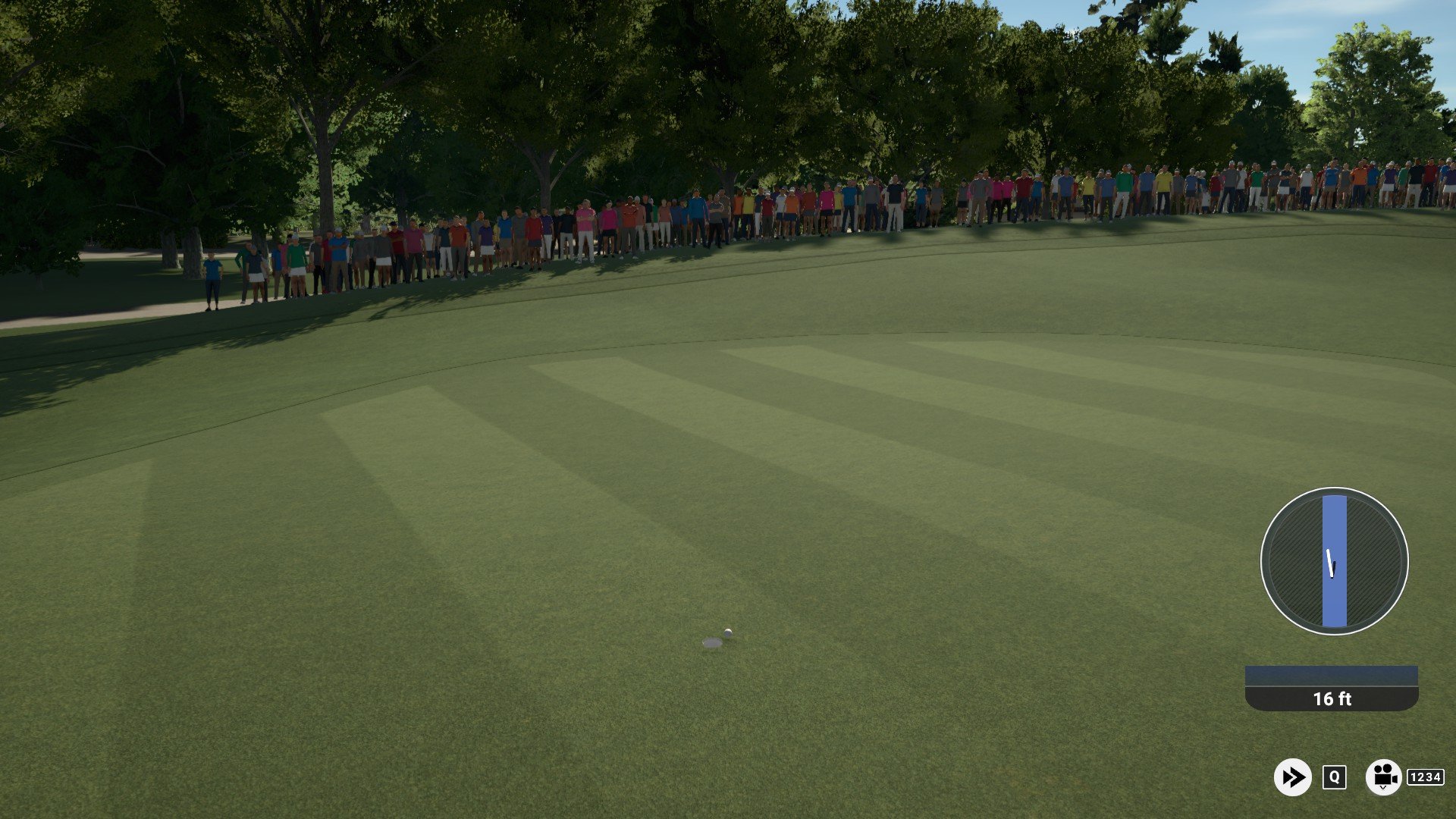 Basically functioning like RollerCoaster Tycoon, you select parts from a number of pre-determined options and then place them around a gigantic sandbox to your heart’s content. You can let the game auto-generate some holes with hazards, or you can delete everything and start with a blank slate. Even customizing surfaces like greens can be as hands-on or off as you want it. Some of the options available already are ridiculously impressive and outshine a lot of the courses HB Studios has created. It isn’t perfect (I would like bridges to be more flexible, for instance), but I could almost recommend the game solely on this component alone.

With the editor, not only are created courses importable from the previous Golf Club games, but they are freely shareable across all platforms. If you make a recreation of Pine Valley Golf Club, players everywhere will be able to check it out. This goes a long way to make up for the shortage of “official” courses and will likely be what keeps you coming back in the future.

I just wish the user options were worth digging into more. With the actual game being so shoddy, there isn’t much point in picking it up if you just want a solid round of golf. Coupled with the demand to play this religiously to actually become competent at it and most players are not going to want to invest that effort. Again, I understand wanting to stay true to a particular vision of how golf should be played, but you need to nail the fundamentals before you start limiting your options. 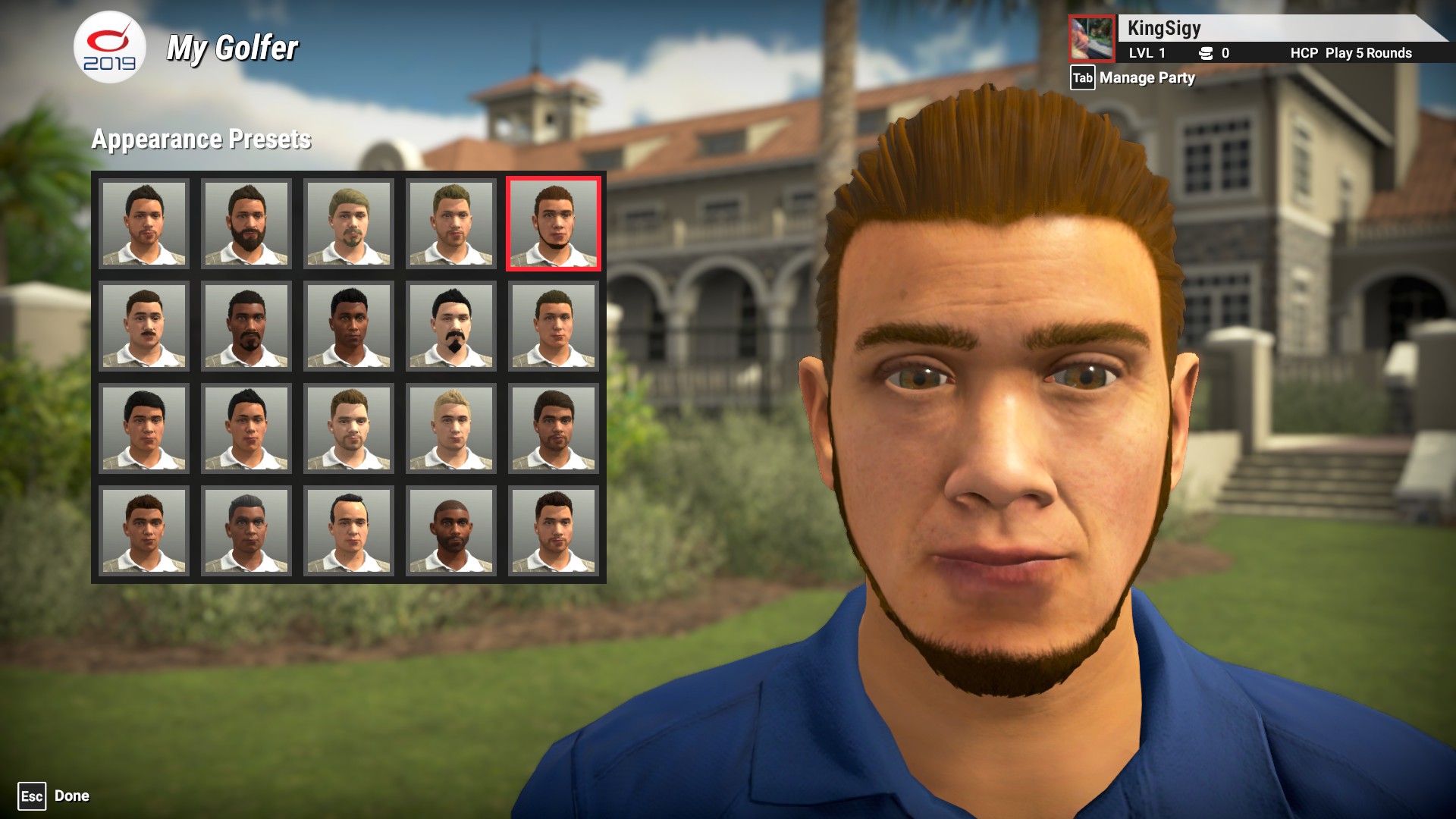 For the time being, The Golf Club 2019 finishes in the middle of the pack. It had such promise and potential but duffs it too many times on what should be easy shots. Until HB Studios goes back and fixes its swing issues, give this a pass.

I think less time in the clubhouse and more time on the course would do HB Studios some good.

Filed under... #2K Sports#golf#reviews in progress