Look, I’m a simple man: I see a flight sim with an animal in it, and I’m immediately game.

The Falconeer caught my eye a while back with its dazzling Panzer Dragoon style approach, but after playing it, I can say that it doesn’t quite have the same appeal on multiple levels. 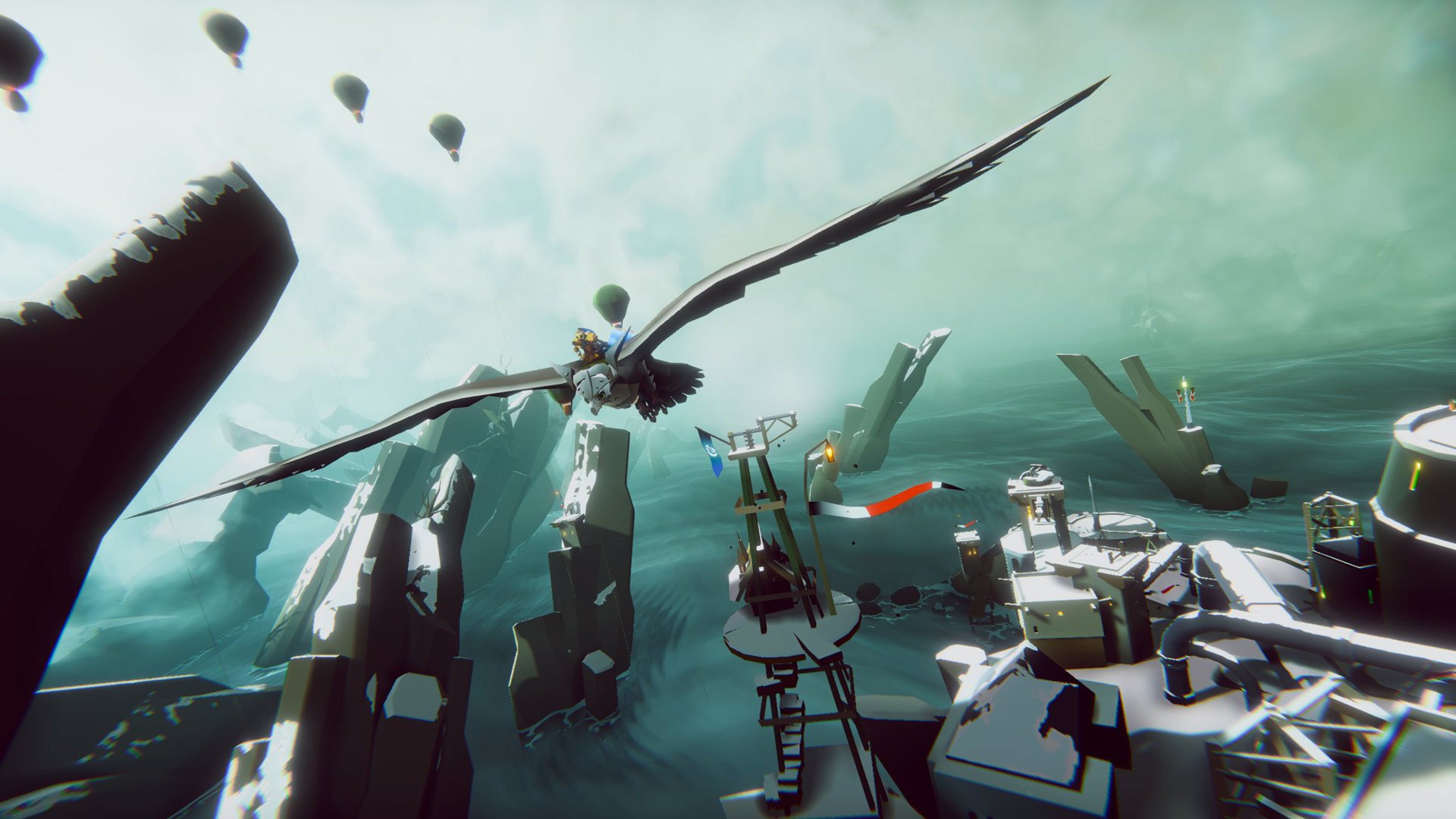 Whisking you away to a war-torn world where literal Falconeers (dudes or dudettes on falcons) were once messengers, The Falconeer tries to quickly immerse you in oodles of lore with tons of exposition.

It was here that I was immediately overwhelmed with voiceover work that was tied to in-game menus: and slowly backed away a bit. Those menus are also unwieldly on consoles, as they seem built with the PC platform in mind and weren’t tweaked. Constant voiceovers (some of which are delivered with a distinct lack of vim and vigor) continue to bombard you at this point.

It didn’t give off the best impression, that’s for sure. But once I was finally off to a mission and controlling the damn falcon, happiness washed over me. I’ll tell you what, The Falconeer knows how to bring me right back in that zone and smack that grin right off my face. It’s a real rollercoaster, as the game tries to mesh what is clearly a very well-thought-out plan for this universe with uneven execution.

Throughout several stages, you’ll command your falcon to dive, dip, dodge, and shoot your way through enemy forces; utilizing a few idiosyncratic mechanics like recharging your guns through the power of lightning in the sky (while navigating said lightning and ensuring your reserves don’t blow). Again, there was a plan here and I can sort of see it come together at any given moment when I’m flying around, taking out tankers in the water, or dogfighting high above the ground.

Diving and rising are elegant, not only due to the great animations, but because the actual mechanical nuts and bolts are sound. Things get better after you’ve picked up some upgrades (mostly the speed-related ones) and can really show enemy forces your moves. In the heat of the moment, The Falconeer is exciting. Then the action stops and it’s time to slowly move to the next task while more exposition plays in the background.

There’s just a big disconnect between the narrative at hand and the gimmick of being a Falconeer. I think I would have much preferred it if the game was just about being a bird in an avian world of strife. Part of that is obviously personal preference (animals are the best), but I also think it would have allowed me to more easily connect to the game; rather than juggle dialogue from generic servicemen in the midst of a war. 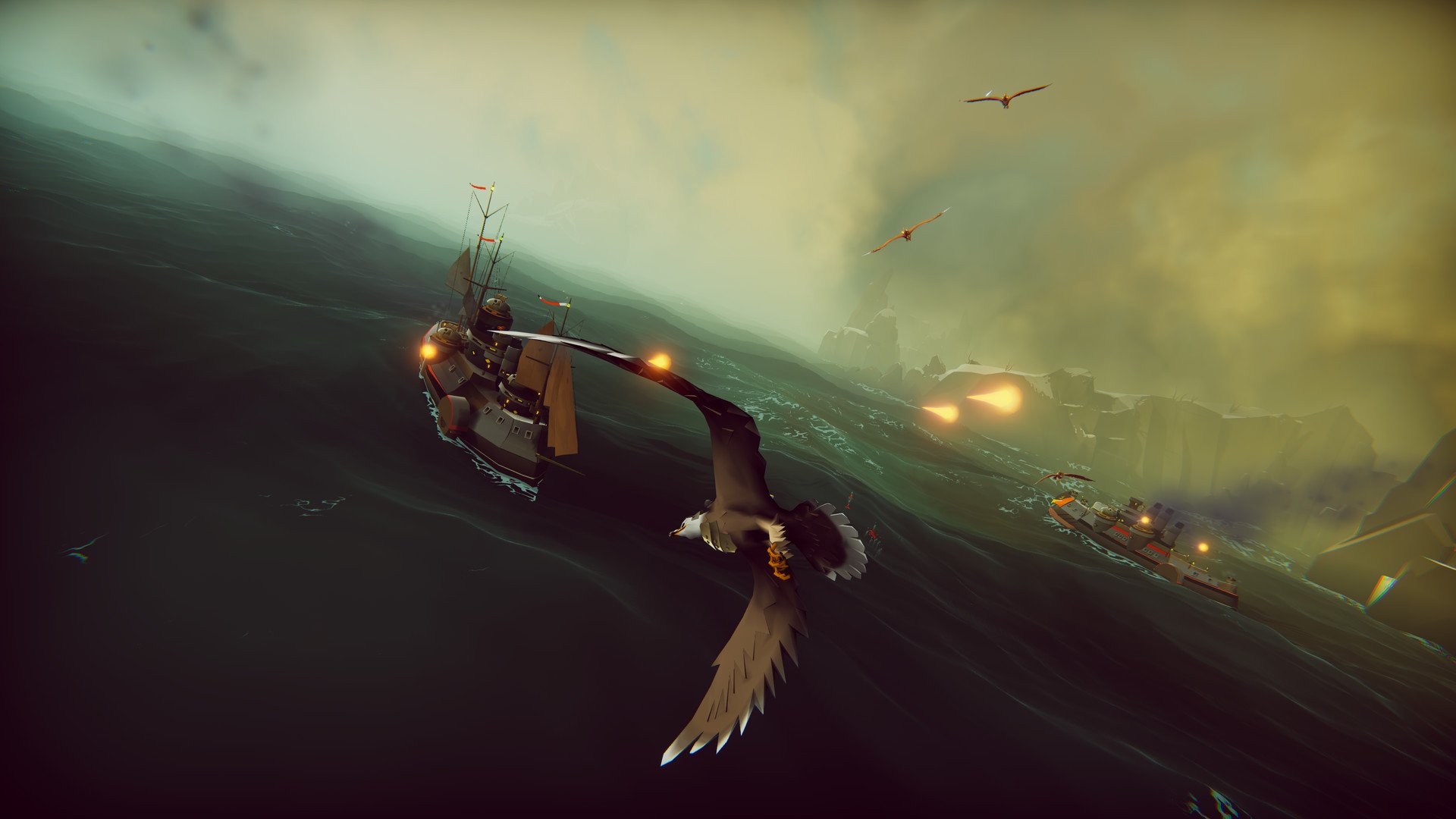 It’s kind of a shame, because the world looks interesting (and plays smoothly), especially on a Series X. Some of the mid-to-later zones are worth stopping and staring at, as few and far between as they might be. Wearing headphones and hearing the chaos around you adds a new dimension to everything

The Falconeer tries to be a legit dogfighting game and it plays the part to an extent; but there isn’t much holding it all together. I feel like I’ve said this often in 2020, but I wouldn’t mind seeing the developer take another crack at it, because there’s a lot of good groundwork here.