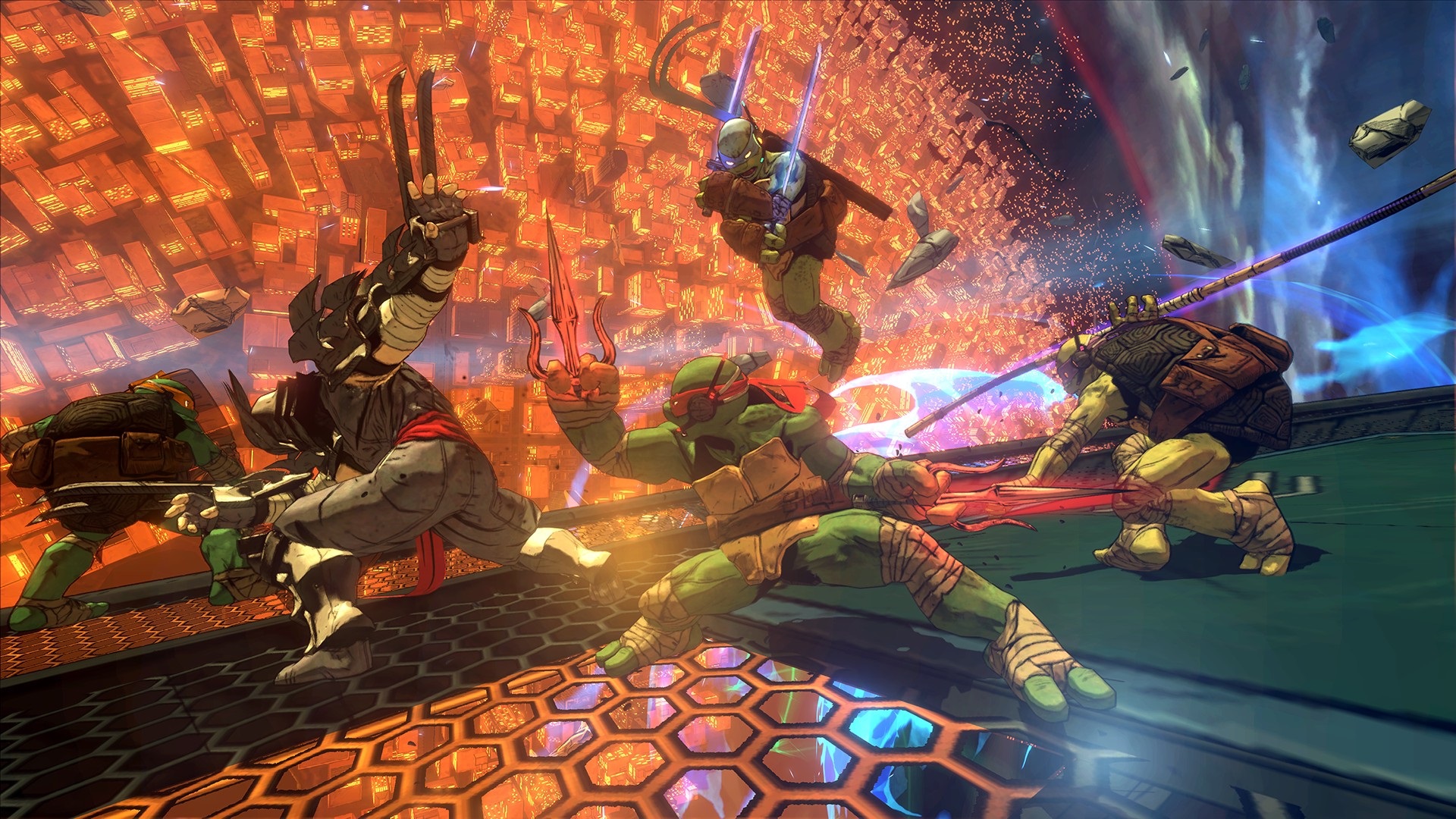 Half-baked heroes in a half-shell

“How are you holding up in there? Do you think you’re getting close to the end yet? It’s like there’s no end to this place,” asked April O’Neil, as I navigated the Teenage Mutant Ninja Turtles down yet another floor of, as she noted, seemingly endless sewers. “Tell me about it,” I thought. Raphael’s sarcasm hadn’t rubbed off on me; Teenage Mutant Ninja Turtles: Mutants in Manhattan‘s dull level design had put me in a foul mood.

I was at least 15 floors deep, and nothing of consequence had happened on at least 13 of them. The quartet dutifully explored each mini-labyrinth, fought a few brief fights, and picked up a handful of not-all-that-important collectibles while looking for the exit to take them to another mini-labyrinth where the process would repeat. An interesting battle against Armaggon wasn’t enough to erase the memory of that 20 minutes of tedium.

That’s how the entirety of Mutants in Manhattan goes. Genuinely tense boss fights are spaced out by almost a half-hour’s worth of padding, all throwaway encounters. Protect some ATMs, disarm some bombs, move some gold — each is just “beat up all the bad guys” by a different name. There’s no circumventing this, as every level requires a certain number of these missions to be completed before the prompt appears to go face off against the boss.

It doesn’t take much time at all before this process grates. Although the campaign is only maybe six hours on normal difficulty, the game wears out its welcome quickly. Save for the subway, each setting is used for two different levels, meaning that the player has seen most of what there is to see long before the experience is over. There isn’t much to Mutants in Manhattan and almost half of it is a retread.

One of Platinum’s guiding pillars for Mutants in Manhattan was that it was foregoing local cooperative play to ensure 60 frames-per-second gameplay. That never happened. The game is locked to 30fps across all platforms (while still only allowing for online multiplayer). It’s hard to say if it’s the sole reason why, but it’s certainly a contributing factor as to why combat is unsatisfying.

Strangely, Mutants in Manhattan has some MMO-like sensibilities, and these are the most gratifying aspects of combat. Each turtle has four assignable special moves, and they can be swapped out and upgraded in a loadout screen. Fighting is less about the skillful mastery of attacking and defending, but more about how and when these special abilities get used, and how they can be used in tandem with the other turtles. Then, after taking advantage of a set of abilities, how quickly another turtle can be switched to in order to use their specials.

For instance, I liked to start tougher battles by using Leonardo’s combo move with another turtle. Then, I’d slow down time so everyone can get some easy shots in. From there, I’d switch to Raphael to stealth attack for big damage. Donatello has a spinning maneuver that works nicely too. Then, it’s over to Michaelangelo for his cheerleading ability, which helps replenish everyone’s specials. During all that, I’d rarely get in close for any normal attacks; it’s usually not worth it.

Despite having my own system, results were almost always mixed. Some battles would go swimmingly — quick and not a single turtle knocked out of action — yet I’d get a B rank. Others, I’d completely botch, but I’d end up with an S rank. It’s a fine summation of a glaring and underlying problem with Mutants in Manhattan: Playing it is confusing and rarely appropriately rewarding. There were just too many fights where I felt like I lucked into performing well. I never felt dominant, and it often seemed like I was somehow succeeding in spite of myself. Simply put: I never felt like I actually knew how to play the game.

As unrewarding as the combat can be, and as much of a slog as the level design is, boss battles are almost Mutants in Manhattan’s saving grace. Seeing some of the most renowned TMNT villains portrayed by Platinum’s slick art direction is a real treat. Fighting them is the unequivocal highlight of the game. As each boss’ seven health bars whittle down, they get increasingly tougher and more aggressive. Toward the end of the fight, your team is often depleted of resources and several turtles are in the pizza room recovering (yeah, there’s a pizza room). Many times I doubted whether I’d end up successful until the very moment the coup de grâce landed.

Then, the developer makes you fight every boss a second time, one after another, completely undoing all the good will it built up.

That exact design decision is emblematic of most everything wrong with Teenage Mutant Ninja Turtles: Mutants in Manhattan. It does its best to spread little content as far as it can possibly go. It’s a very short game that still manages to be far too long. The anchovies on the pizza is that it doesn’t even necessarily succeed where Platinum Games usually excels. Cowabummer.