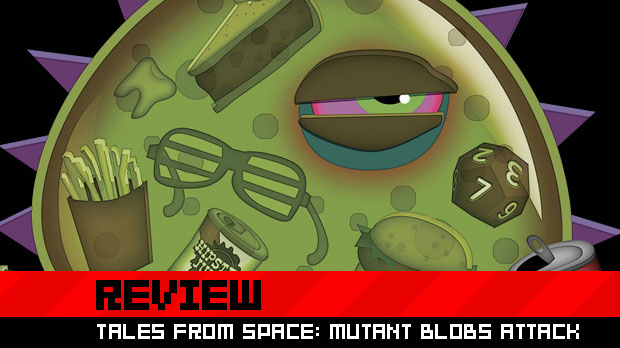 While early adopters of the PlayStation Vita have whipped themselves into an excited frenzy over the likes of Uncharted and Marvel vs. Capcom 3, one humble little indie game sits patiently among the high profile offerings, just waiting to be discovered. It arrived with little fanfare, but those who have discovered it are trumpeting its qualities quite loudly.

Tales From Space: Mutant Blobs Attack is cheap and obscure, but it’s already been called the best PS Vita of the lot. While it’s not the paragon of perfection some would have you believe, one thing is undeniable — it’s example of how to use the PS Vita’s features in a complementary, rather than gimmicky, fashion needs to be followed by absolutely everybody. 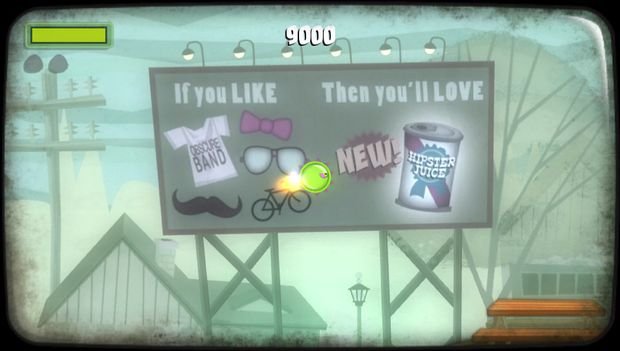 Mutant Blobs Attack is the story of a little ball of gelatinous green goo that has landed on Earth with a simple purpose — consume everything. It begins its life no bigger than a marble, but the more it eats, the more it grows, and it eats a lot.

Taking the form of a two dimensional puzzle-platformer, players must guide the titular Blob through twenty-four levels spread across six regions. Our Blob starts life in a college frathouse, absorbing screws and teeth, but exponentially grows in size over the course of the game, eventually becoming large enough to eat people, vehicles, and more. The game’s closing chapters are what it all builds to, and the payoff is a triumph of glorious proportions. In order to get there, however, one needs quick reflexes and a little bit of patience.

Mutant Blobs Attack is mostly controlled in a fairly straightforward, traditional manner. The left stick moves it around, while the X button causes the cycloptic lump to jump off the ground or from walls. Hitting Circle in mid-air performs a stomping maneuver, and objects are consumed simply by rolling into them. While the controls are fairly simple, players will always need to account for the Blob’s bouncy physics and sponge-like body that can see him fouling a jump if the angle isn’t quite right. Sometimes the loose physics can annoy, but most of the time the extra challenge works to keep things interesting. 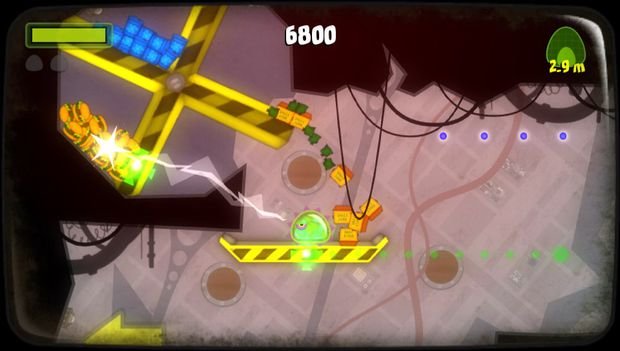 Corks block entry to new portions of each level, and they’re always too big to be eaten when first encountered. Fortunately, there’s plenty of food to be consumed, often as a reward for puzzle completion, which allows the Blob to grow in size and eat his way to freedom. At first, things are kept quite simple, with food simply scattered on ledges. As the game progresses, players will need to use levels, moving platforms, and even explosives to get food from one area and into the Blob’s hungry body.

At various points, the Blob will unlock new powers which prove crucial in navigating the increasingly complex, trap-filled levels. Platforms and machines bearing green lights can be telekinetically moved by manually manipulating them via the touchscreen. These touch controls will move elevators, place barriers to block lasers, or give the Blob a hard shove and propel it over deadly chasms.

Objects that glow purple are magnetic, and the Blob can attract or repel itself from them with a press of the L-button or R-button respectively. At first, players will simply use these objects to crawl across impassable areas or levitate toward high ground, but eventually there will be puzzles that require a keen gravitational balance. One such example is a magnetic surface covered in spikes, requiring the Blob to attract itself just close enough to float across a gap, but not so close that it gets impaled. 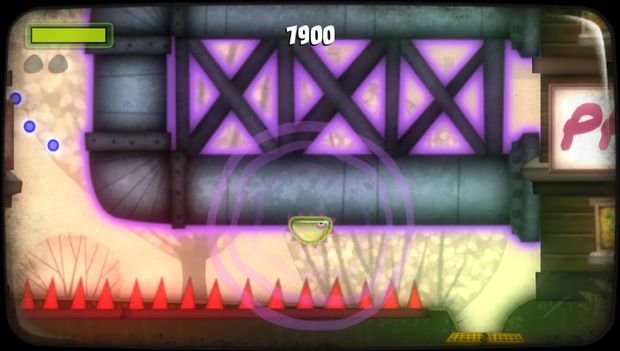 While Mutant Blobs sticks to a mostly traditional format, there are points where the gameplay switches up. Sometimes, the Blob will get pumped full of gas, which it can expel in order to fly around a stage. These flying sections are by far some of the most fun, and again derive much of the challenge from the Blob’s physics and momentum. There are also top-down stages in which the Vita’s gyroscope is used to roll the Blob around, avoiding holes and swallowing all manner of objects.

Mutant Blobs gets by on a charming visual style and a range of increasingly clever puzzles. Still, its concepts are things we have seen from many other puzzle-platformers in the indie scene, particularly on mobile devices such as iOS. Dashes of Oddy Smog’s Misadventure and Blast Off can be found liberally scattered throughout the twenty-four levels, but Mutant Blobs certainly appropriates these concepts with a sense of original style.

Style, however, doesn’t quite cover up the problem faced by this and several other digital Vita games — it looks, feels and plays like a mobile game, but costs a significant amount of extra cash. This is a problem that I fear many indie PS Vita games will face in future. iOS and Android changed the market for a lot of these games, where it’s no longer a good deal to get something like this for eight dollars when similar experiences are being sold for a buck elsewhere. It’s not exactly Mutant Blobs‘ fault that this has happened, but it’s still very much the nature of the handheld gaming space now. For a title like this, that can be cleared easily within two hours, it’s difficult to justify such a cost, even though it’s the cheapest PS Vita title available. 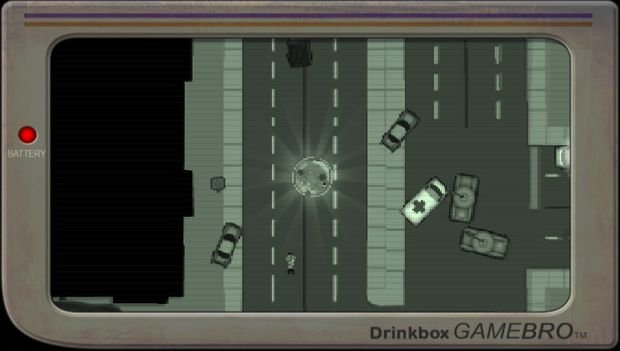 That said, Mutant Blobs still deserves credit for using the PS Vita’s unique interface in an expert way. Unlike titles such as Dynasty Warriors NEXT or Little Deviants, the touch and tilt controls have been integrated smoothly and enjoyably into the core gameplay. Use of the touchscreen is subtle and actually works to make puzzles more intuitive and sensible. New control schemes often fail by making simple activities more complicated than they should be, while Mutant Blobs is only enhanced by the extra input options.

This alone is what helps Tales From Space stand above almost every other PS Vita launch title. It was clearly a game made by people who knew both the Vita’s strengths and weaknesses, exploiting them to create a genuinely enjoyable experience. Every now and then, there is a rare puzzle that requires an awkward dual use of analog stick and touch-based gesture, but for the most part, the controls seamlessly work together to produce a consistently satisfying puzzle challenge. 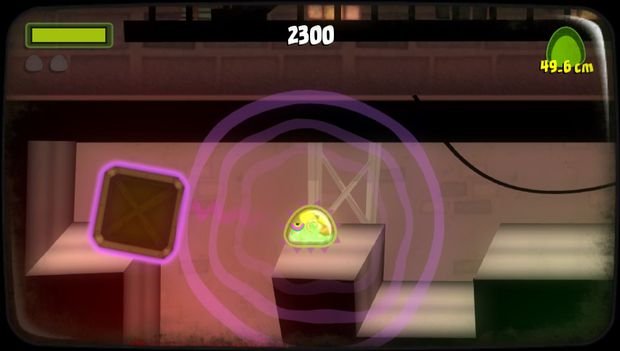 Tales From Space: Mutant Blobs Attack isn’t particularly unique in terms of core gameplay, making its mark instead by simply doing what it does so well. It feels a little too much like a mobile game to stand out as a must-have title, but if you want an example of PS Vita controls done correctly, you won’t find a better example than this. It doesn’t hurt that you’ll get some challenging — if sometimes frustrating — physics-based puzzles to boot.

That, and the superb finale might actually be worth the asking price on its own.