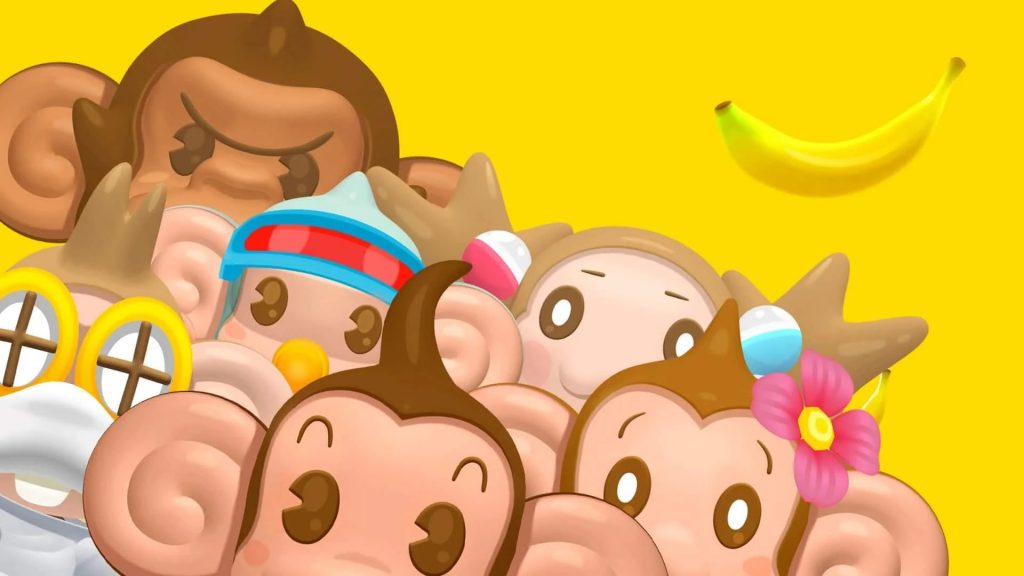 Witnessing Monkey Ball for the very first time was a surreal experience.

I went down into my friend’s basement, and upon my descent, I heard a combination of loud noises, monkey sounds, and my eyes were immediately drawn to its bright color palette. “Watcha playin’?” “Monkey Ball,” his little brother said so matter-of-factly. I ended up staying the night after we played it all day long.

It was part of that magical era of GameCube where basically anything was fair game and nothing was too weird. Yakuza boss and Sega legend Toshihiro Nagoshi really was onto something when he pitched monkeys rolling around in balls as a game hook, and that’s pretty much the gist of the entirety of the series. You roll around in a ball in a somewhat labyrinth format a couple hundred times; sometimes alone, sometimes with friends. It’s timeless.

2021’s Banana Mania is a bundle and remaster of Super Monkey Ball 1, Monkey Ball 2, and Monkey Ball Deluxe (which itself was a bundle of the first two games with exclusive stages). It’s 300 levels in all, with some extra twists, more accessibility features (most notably a helper function), and some party games.

Before we unpack all the ancillary stuff let’s talk about why Monkey Ball still works. The core formula is still so accessible after all these years because it’s inherently self-explanatory. You manipulate the stage to coax the ball (which is filled with a cute animated monkey or cameo character) to a goal, and collect bananas along the way, which operate as points/an extra challenge feature. That’s it. Even 100 stages deep, your goal is the same: get to the goal, and if you’re looking to stunt/high score, get the bananas. It’s brilliantly simple, easy to teach, and incredibly hard to master.

Super Monkey Ball Banana Mania does good work in terms of keeping that tight rope of balance. Some stages are brutal to the point where getting every banana is going to feel like a gargantuan task. To master the game’s physics system to the point where you need to make jumps without jumping (though there is an optional unlockable jump toggle) can be daunting. But by that same token, the helper feature is there, and you can get to that point. Or, wistfully just aim for the goal and ignore the banana layer: your call.

The helper mechanic really is key, because I can’t tell you how many people have been wooed by the promise of cuteness only to smash their controller against the wall in practice. The toggle provides extra time to clear a stage (so you’re not racing the clock or cutting it quite as close getting all the bananas), but it also adds a slow-motion button and provides guided arrows.

If all else fails, you can spend points (which are used to unlock new modes, options, characters, and costumes) to skip a stage entirely. And there will be at least one of those times where you’re about to throw your remote in frustration, but get that second wind through a painless skip. Guide arrows are a secret weapon for teaching Monkey Ball, and it can’t really be understated. It helps you understand the angles and nuances required for some movement tricks, and it’s completely optional if you want to go at it with just your skills.

Not every stage is a winner, and there’s some very frustrating banana placements if you want to try and 100% the game. The elimination of lives helps ensure things don’t get out of hand, but all of the layouts that pissed you off before will return in all their glory — so be warned if you aren’t keen on using any stage skips or helper options at all.

Beyond the roughly 300 stages in the core mode there’s also a party gametype for 1-4 players, with 12 minigames in tow. The best part is that all of them are playable solo: whether through a high score/time trial challenge or by way of bots. All of them have at least one option or stage select screen to mix things up. So here’s the full list: Fight, Golf, Racing, Shot, Soccer, Target, Tennis, Baseball, Billiards, Boat, Bowling, and Dogfight, all with the “Monkey” prefix.

It’s a good minigame dump, as it has something for everyone. While a few of them are self-explanatory (Bowling is literally bowling with your monkey ball), several are extremely Mario Party-esque (Fight is just bashing against each other until everyone else falls off). One of my personal favorites is Shot, which is a take on light gun games (and co-op), but all of them are fun in their own right. It’s really crucial to note that your long-time mileage out of Banana Mania will vary based on how many people are in your playgroup. Eventually your hunger for high scores or a straight critical path clear will be sated, so you’ll need to rely on friends to really push the game long term. Given how many minigames there are (and the co-op option), it makes it easy to keep playing, or maybe work it into your rotation for game night.

Nearly everything you do earns you points, which unlock the aforementioned content/cosmetic options above (on top of some paid character DLC that’s coming). While points can be slow going the more you dig into the game (and things get tougher and progress is more of an uphill climb), I was able to unlock a few camera filters and two characters in about 30 minutes. So if there’s someone you really want, you can get them. The only bummer is that you can’t use unlockable characters like Beat or Sonic and Tails in party mode.

Super Monkey Ball Banana Mania was a pleasant surprise, in that it doesn’t mess too much with a formula that works and it makes strides to welcome newcomers into the fold. Not all of its stages are created equal, but this is a great entry point into a series that’s been lacking one on modern platforms for a long while.