Beauty and the Beast

A young wanderer, Eshe, battles through a violent desert sandstorm. Just moments before reaching shelter, tendrils slither out of the sand and wrap around her limbs, pulling her under as she fights to stay above ground. Eshe re-awakens in huge nightmarish world of eldritch creatures, soulless robotics, and sinister voices that spur her forward.

This is how we are introduced to Sundered, the new adventure from Jotun creators Thunder Lotus Games. It is our mission to guide Eshe back to the surface, a task that seems insurmountable, and ultimately could cost her more than her life. 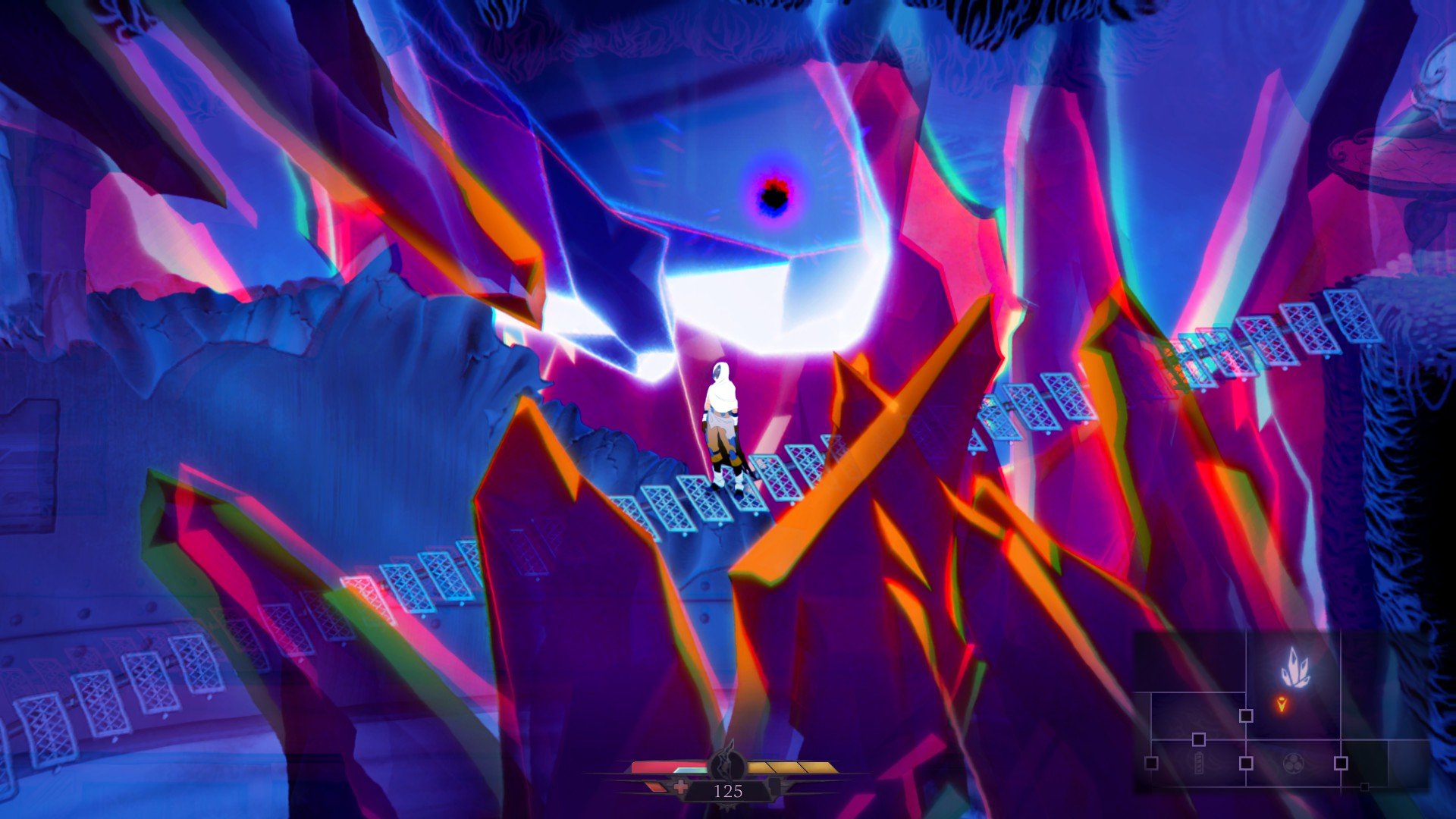 Sundered is a metroidvania that attempts to blend skill-based exploration with the procedural generation of a roguelike. It mixes in combat with unforgiving difficulty, the stat-progression of an RPG, and even squeezes in some bullet-hell elements. Anything else?

Eshe must travel through three regions, each of which has its own distinct style, enemies, and traversal system. Eshe progresses in non-linear fashion, toppling bosses and gathering perks in her quest to escape the Lovecraftian hellscape that holds her prisoner. Armed at first with only a trusty sabre, she must fight off relentless waves of enemies, using the crystal shards they drop to level up her survival arts.

Whilst the environment’s main objectives are fixed into position, the path throughout the regions regenerates itself each time upon death, so no two journeys are the same. This is a major construct of Sundered. Unfortunately, a game mechanic designed to provide consistent originality ironically backbones the game’s major flaw: repetition.

As you progress you’ll come across the exact same screen layouts repeatedly, often just minutes apart, which becomes monotonous fast. It causes a disconnect between the player and the game world. I would rather have had one static-but-unique map to learn and adapt to, than have to run the same rooms, shuffled into a new order, hundreds of times. By the end of similar games, the map system has usually been replaced with your own memory, but because of Sundered‘s ever-changing environment, map-checking is a frequent, flow-breaking necessity.

Monstrous threats to Eshe are spawned into the area based on an algorithm, factoring in map position, kill-ratio, and other circumstances. Almost at random, an ominous gong will signal the arrival of a huge spawn of enemies (known as “Hordes”) that are designed to kill you. Not to challenge you. To kill you.

Sundered wants you to die, because the game wants the player to remain locked into stat-building. This doesn’t reward you for excellent gameplay skills, nor does it encourage you to defeat the odds. Rogue Legacy is also a game in which death is necessary to progress, but you always felt like you had a fighting chance and would thus feel intense satisfaction in its hard-earned victories.

The difference is that Sundered has no interest in you fighting your way out. Enemies spawn en masse, attacking Eshe from all directions (including through walls, off-screen, and via life-sapping area effects), and then you die. It’s not a tense, skillful fight, it’s just a one-sided, button-mashing encounter manufactured specifically to halt your progress. 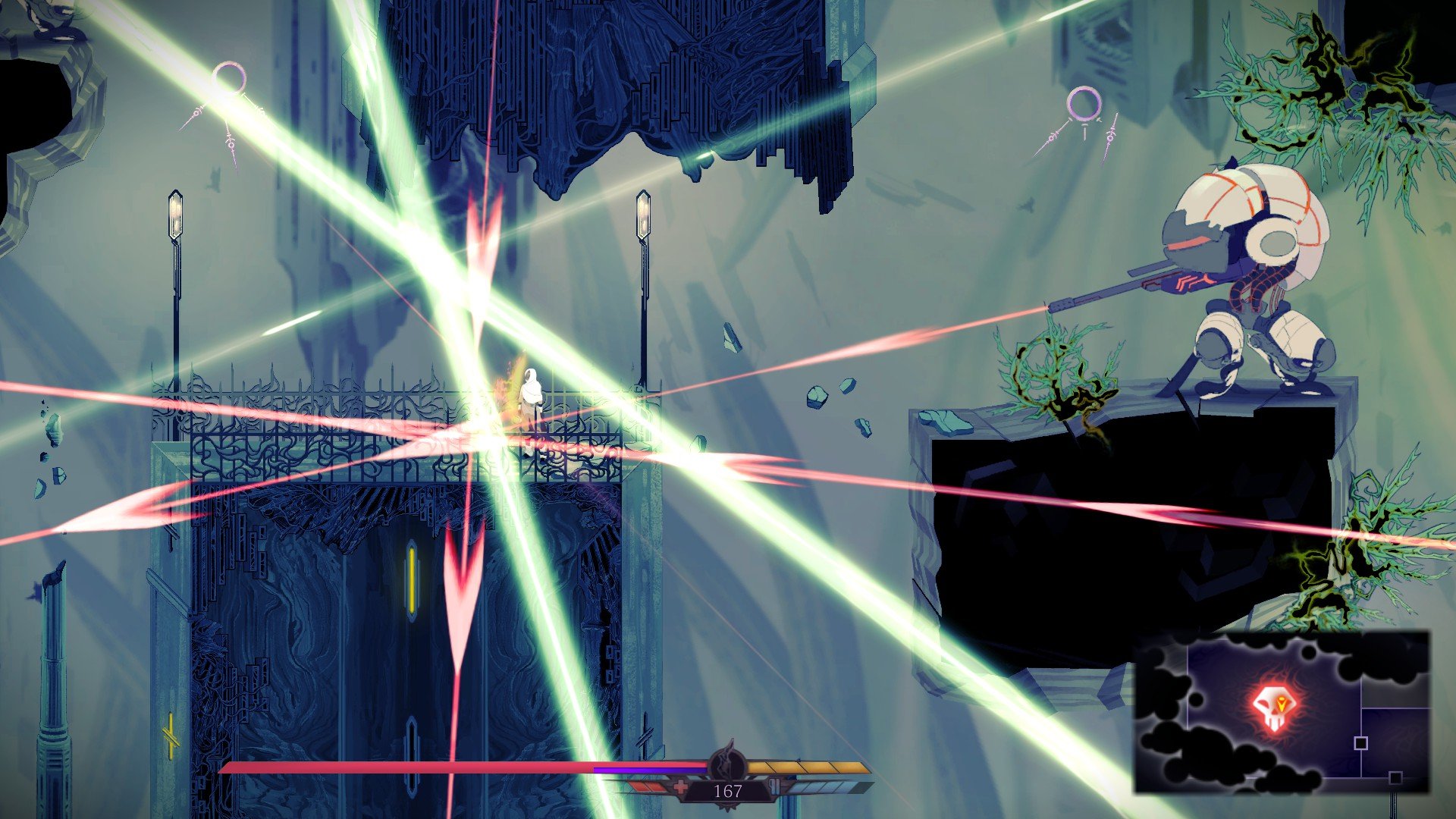 These death hordes very quickly become nothing more than a wearying nuisance, with their signaling gong sound effect causing a roll of the eyes, rather than a burst of adrenaline. You’ll frequently die after ten solid minutes of exploration, causing heavy sighing at the concept of making the whole journey again, and now through an entirely different map layout.

Multiple times I was able to outfight the seemingly (in some areas actual) infinite waves of baddies to be rewarded with the game banging the gong again minutes later and sending even tougher bastards after me. Sundered is the equivalent of someone throwing rocks at you whilst you walk a tightrope, should you skillfully deflect those rocks, they’ll just say “Fuck it” and cut the wire instead.

I’ve completed very difficult games before. But the difference was as I adapted and learned to play those games I felt self-improvement, which encouraged me to keep pushing. Sundered doesn’t allow such satisfaction in battle, and in fact punishes you further for your successes. It isn’t just difficult, it’s almost petulant.

Maybe I would have found the fire to oppose such antagonism if I had strong reason to get Eshe back to her feet. But, as more of a mood piece, Sundered has little to no narrative connection. We know zero about our faceless, silent protagonist (the trailer’s narrator is not featured in-game), and the mystic backstory to her terrifying new world is drip-fed across the journey in scant sentences.

I’m all for subtlety, but if you want players to fight insurmountable odds, then they have to care about why they’re fighting. They need a hero to connect with and to root for (see Meat Boy). Otherwise, your protagonist’s struggle generates only apathy. Though Sundered has multiple endings, by the finale I was so knackered from running uphill for fifteen hours, that I had lost interest in the story’s outcome. 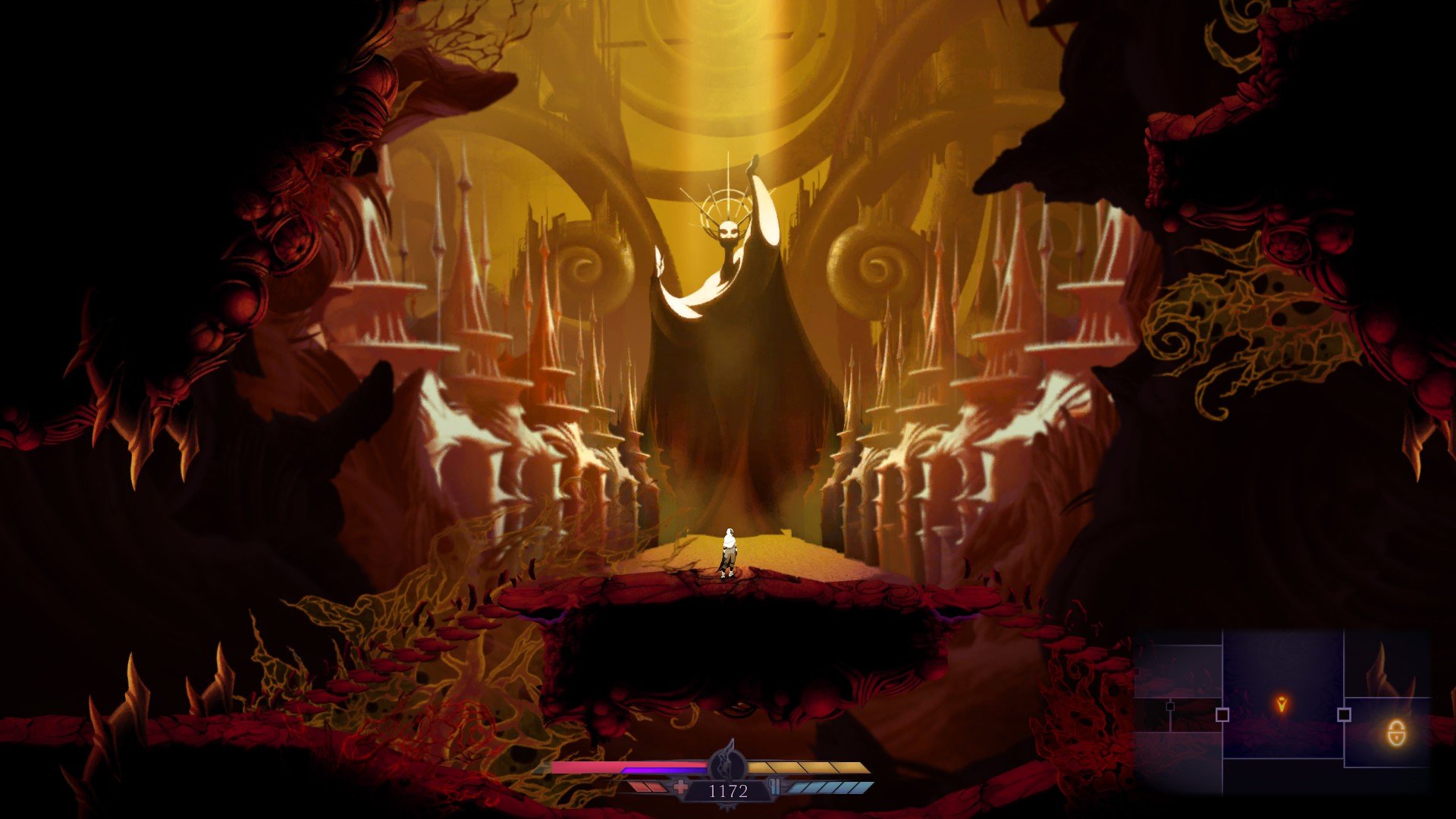 Of course there is some positivity. The game is stunning. It has beautiful hand-drawn sprites, who move, fly, fight and die with delightfully fluid animation. The scenery is equally gorgeous, from gory caverns of slime to intricately crafted Valkyrian architecture.

The game’s lengthy boss encounters, with creatures standing a mile tall, are impressive and genuinely unforgettable. It’s in these fights that Sundered truly comes alive, with me defeating one particular screen-high nightmare with a huge sigh of relief, whilst literally sat on the edge of my seat. These are the game’s moments of glory.

In the final act, once I had acquired all my “mad skillz,” movement became a delight. Eshe gracefully leapt around the third region with elegant jumps, swings and flips, sticking landings like Jessica Drew. It’s such a shame that by the time I felt this freedom of movement, there were only a few hours of play left.

Sundered exudes passion, and has had a lot of work in it. Thunder Lotus are in tight with their Steam fanbase, already making tweaks to the game according to feedback. I unfortunately came across some irritating bugs myself, including a few that cost me boss fights, but the developers were open to listening and said they’d work to fix problems. I believe they will.

But the umbrella problem is ultimately repetition. Combat is repetitive, the layouts are repetitive, enemies are very repetitive and, of course, death is repetitive. You can make your game as tough as all hell, that isn’t a negative point per se. But without a hook, a sense of fun, or the satisfaction of victory, it stops being a challenge and just becomes exhausting. 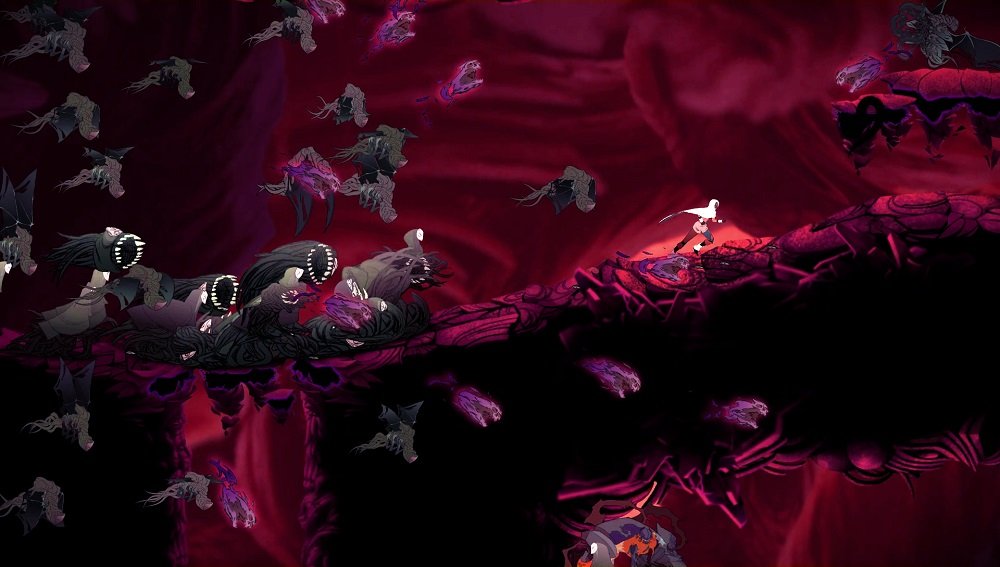 Sundered has a low price point, and contains easily 15 hours of playtime, more if you wish to 100% the game. I think playing small increments over a long period of time is key, to allow the adventure to stay fresh, and to prevent the build up of frustration and repetition. Even then, you have to be a pretty masochistic gamer up for the challenge. General metroidvania and platform-hopping fans can find more pleasurable options for similar prices.

Writing that such a good looking, clearly heartfelt project isn’t an awesome game frankly sucks. Literally just glimpsing these screenshots fills me with wonder once again. But I have to shake off those starry-eyes and remind myself of the fatigue and apathy I felt just halfway into Eshe’s journey toward salvation or damnation.

Sundered is a collection of ideas and genres that on paper blend together well but, in this case, made for uncomfortable bedfellows. Passion and talent are on display however, and I’m hopeful for what we see from Thunder Lotus in the future.