I’ve been playing Street Fighter as long as I can remember, and nearly everyone I’ve met has had a different approach to it. That’s the power of this franchise — for every person who swears by Blanka, there was someone who absolutely adored R. Mika, and taught me to love the character as well. It has managed to permeate through the fighting game zeitgeist to popular culture, and the community is just as passionate today as it was in the beginning.

With Street Fighter IV however, I felt my passion falter. It was a great, well-made game, but there was something about it that just didn’t light my fire, like most past iterations managed to do almost instantly. With Street Fighter V, I feel that fire again — I just wish it had all of its planned features at launch. 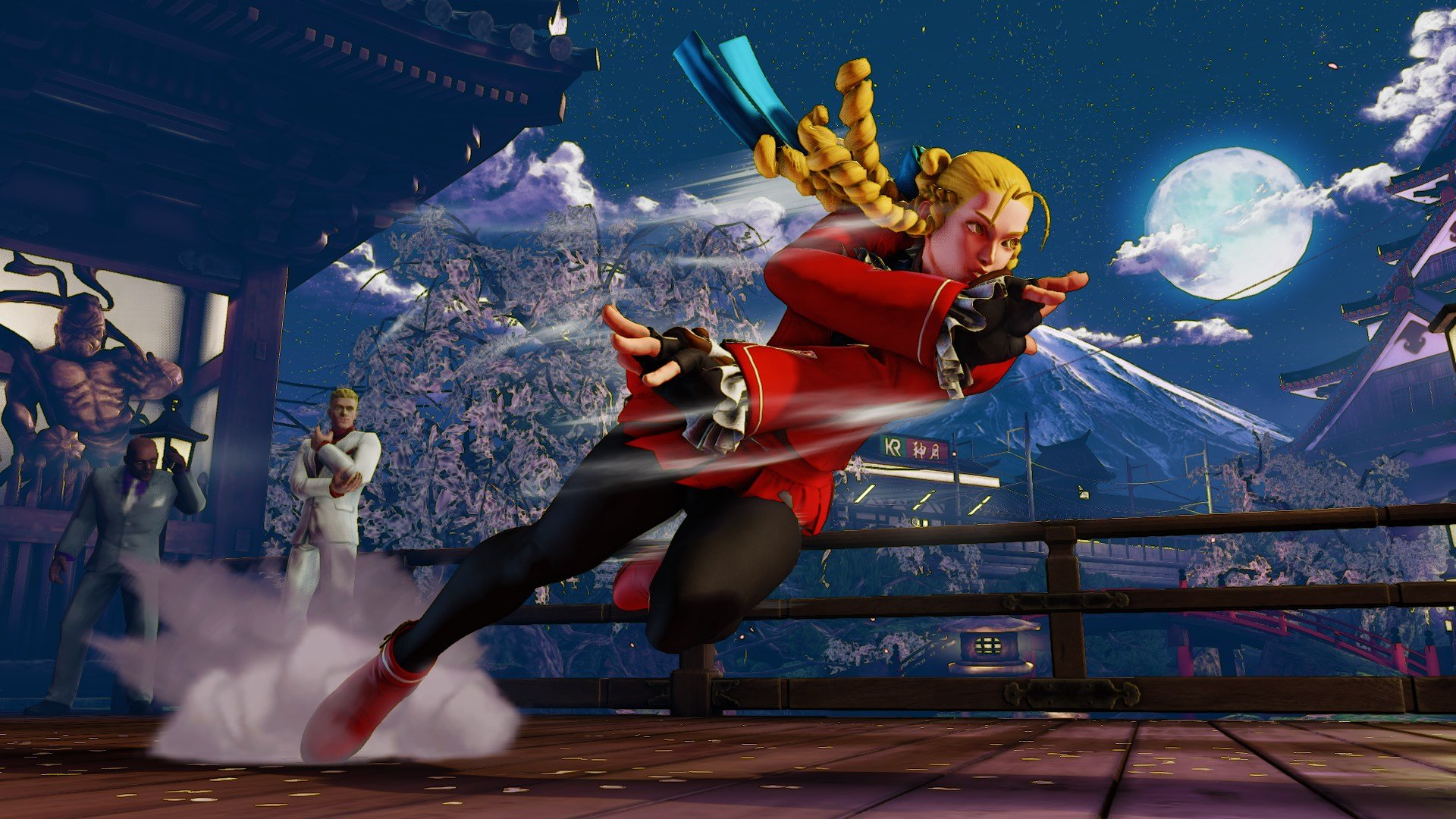 [We will continue to cover Street Fighter V as it evolves. For a rundown of how the DLC system works, click here.]

Lets get right into it.

V follows a similar formula compared to its past iterations, but with a few differences — most notably, the V, or “Variable” system. As an extra meter on top of your EX bar (which is still used for powered-up EX moves and Critical Arts), this one governs a few new abilities that are unique to each character. V-Triggers, V-Skills, and V-Reversals are at your disposal, all of which have different uses throughout the match.

In short, Skills are bread-and-butter moves, accentuating a character’s playstyle. F.A.N.G., who heavily relies on poison attacks, will throw a poison projectile. Nash, a character capable of zoning, will absorb a projectile. And so on. Triggers are more like temporary boosts (think Marvel vs. Capcom 3‘s X-Factor) for most, but not all of the cast, where they enter an altered state. V-Reversals are essentially combo breakers, where you can expend meter to interrupt or dodge a rival’s pressure while blocking.

V-Skills are enough of a shakeup on their own, but the V-Triggers are where I found the bulk of the nuances of Street Fighter V. At first glance, a lot of these Triggers might seem throwaway, but similar to the V-ISM variant in Alpha 3, many altered states add hits and fundamentally change up combos. Other characters like Bison can dash through characters, severely upping his cross-up potential; Necali completely transforms and goes Super Saiyan for the rest of the round; Zangief gains more armor — the list goes on.

Rather than drone on and on about mechanics, I’ll just dive into some of my favorite characters. A roster of 16 is fine with me, because basically every addition has something to offer. Sure, as someone who has been playing Akuma since Alpha, I miss him. But there’s so much personality in every fighter that I’m able to forgive his absence. Birdie picks his nose and flicks it for damage when remaining neutral, while R. Mika charges up moves by giving motivational speeches — the game is silly. It’s more in line with the spin-offs than core games like Third Strike and IV (I’m just saying, Ono, Skullomania would fit perfectly in V).

The new characters are also a bright spot. I love F.A.N.G., his poison gimmick, and his absurd drunken master style far more than I thought I would. Necali’s brutal moveset works even when juxtaposed to some of the weirder ones (like Birdie’s ability to consume donuts and energy drinks). Rashid sports insane mobility, perhaps more than most Street Fighter characters in the past. And Laura, who is a grappler at heart (a style of play I don’t really dig outside of Mika), is slowly growing on me. Even returning members have something new to offer, as Nash has been given a complete rework with a Frankenstein-like appearance. It’s great. 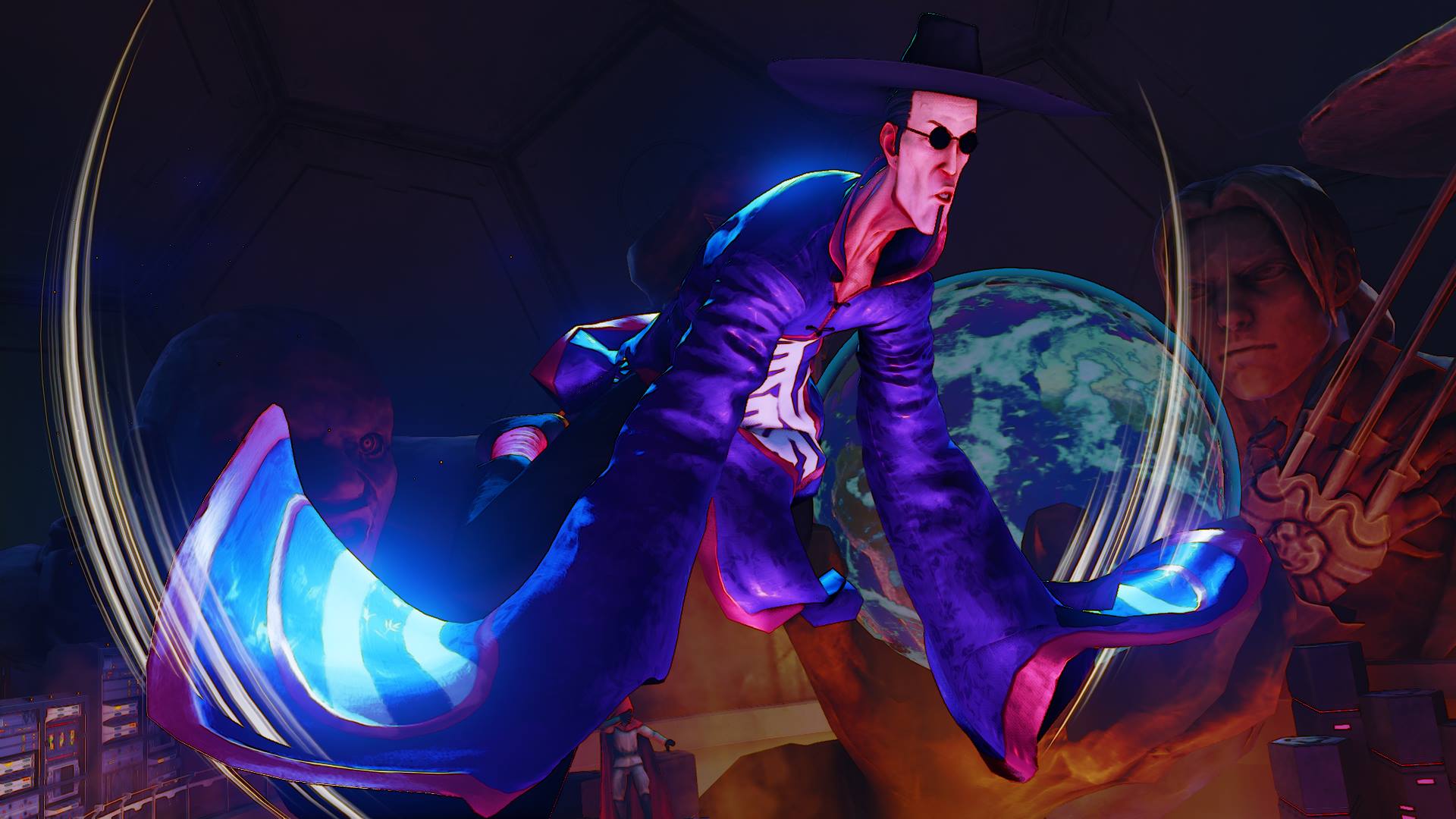 The Shotokans (Ken, Ryu) are still Shotokans even with the V changes, and that’s perfectly fine with me. I’ve always agreed with the mentality of “if you want to learn a fighting game, you learn Ryu first,” and that remains true of Street Fighter V. While veterans are going to be in the lab for years on end, newcomers will still be able to pick up the sticks and practice just as they always have. It’s a true testament to the power of the series and despite all of the tweaks, that has not changed. Ono and his team did right by this principle.

So enough about the fighters — onto the content. For those of you expecting a substantial single-player side, prepare for disappointment. First off, the only real solo element right now is the story mode, which, after completing all 16 prologues, can barely be called that. Capcom contracted Bengus to do the artwork for these tales, and I have to say, I’m not really a fan of his work here, nor am I fan of this delivery system in general.

These are placeholders, events that barely even deserve to be in the game, and I’d almost rather have them not in at all. You get tiny little insights like Ken’s relationship with his family, his quest for glory, and need to party, but they’re so fleeting that they’re over nearly as soon as they begin. How fleeting? Try 10 minutes for each, if that. In a few hours, you could have all of them done, which will leave you wanting more. If you want a full-on cinematic campaign, that’s releasing later (June), albeit as a free update. But that’s not the only thing coming later. 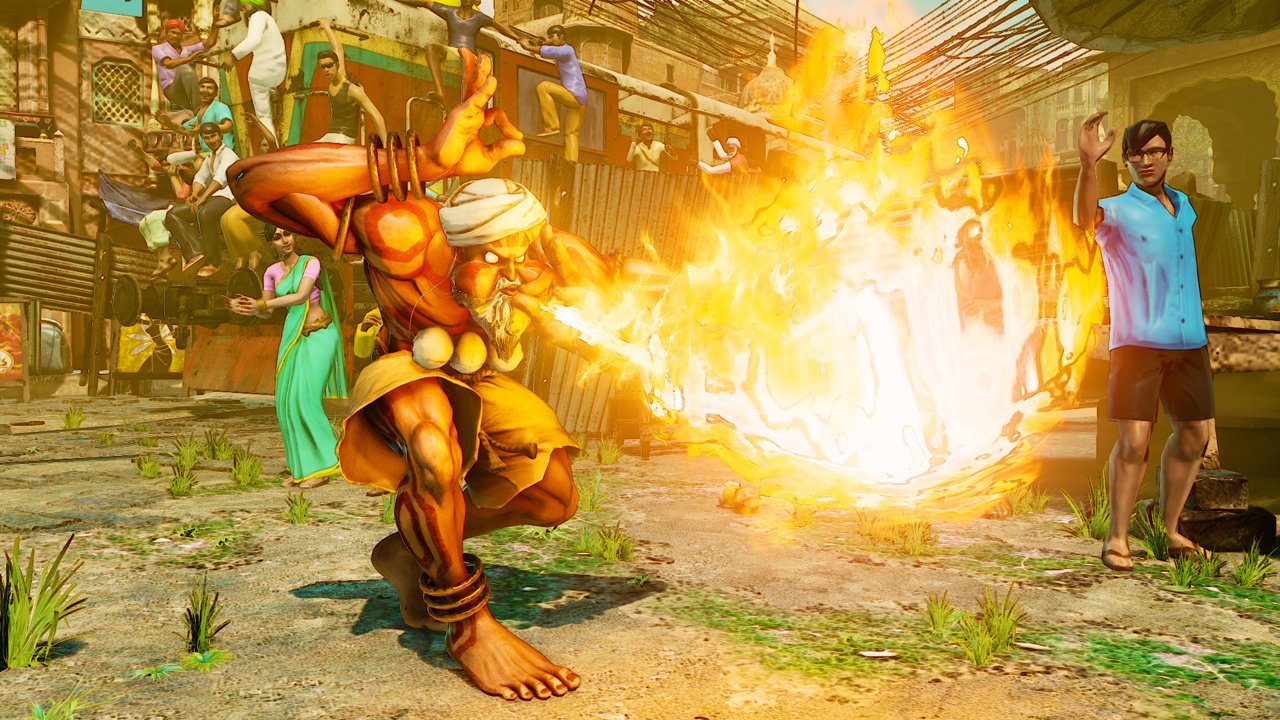 Spectator mode is arriving “soon,” a real Challenge Mode and Daily Challenges are coming in March, and support for larger lobbies is also arriving “shortly after launch.” The game is rather light on other modes at the moment, as you have versus (offline and online), training, survival (a string of opponents where you can exchange points for buffs between rounds), and…that’s it for now.

Most people will be spending their time in the online component, though, and here’s the good news: it works, and when more players start to really use it, it’s going to be great. Capcom has implemented the CFN in Street Fighter V, which is a robust platform that not only allows cross-platform play between the PC and PS4, but also allows you to quickly search for and view replays from other players. With hundreds of replays already available during my review period, this is going to be an awesome way to follow the best players and stay in the meta. Hardcore fans are going to love it, as it’s more of an excuse to stay in the game, rather than theorycraft online. It’s a bit raw, but nonetheless, the skeleton is there — players just need to supply the meat.

Fight Money is also a brilliant concept, if Capcom sticks with it. Just like League of Legends, players can earn in-game currency to unlock additional content, most notably characters, which are coming with a monthly cadence. The idea is to keep people playing to work towards a meta-goal, which, honestly, is what fighting game players do anyway, and there’s still a premium option like before (it’s called Zenny). Right now, the exact rate of accrual isn’t live yet (characters are 100,000 coins, and Capcom claims you can net enough for Alex off of solo content alone), but we’ll continue to cover this system as time goes on to keep you up to date on its happenings. For now, it seems as if it is going to eliminate the need to distribute “Super” and “Ultra” versions, as Street Fighter V will remain one SKU. 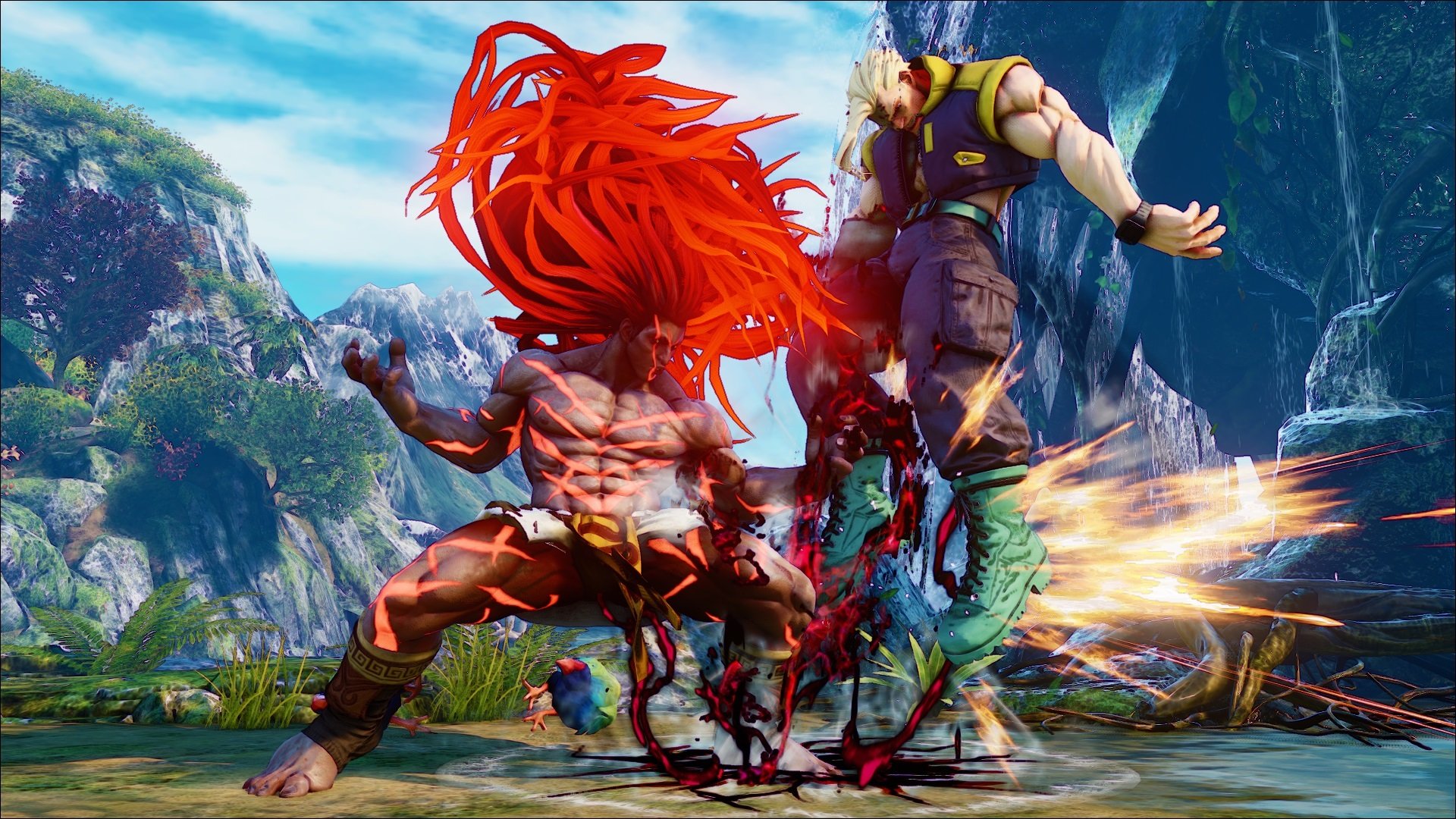 In case you’re wondering, yes, I was able to test out online play over the course of roughly a week, mostly in the ranked arena. While it’s annoying that your Fighter ID cannot be changed (and is rather finicky to begin with when signing up), I haven’t had any other major issues yet. It has been very stable — no doubt as a result of months of beta tests — but it is a pre-release period, so we’ll be sure to report on stability news as it arises. I encountered some slight lag at the start of a few matches, but it was corrected in a matter of seconds.

In many ways Street Fighter V is unfinished, but as a platform, it has strong legs. If Capcom sticks to its word, this could have just as long of a lifespan as IV, if not more.