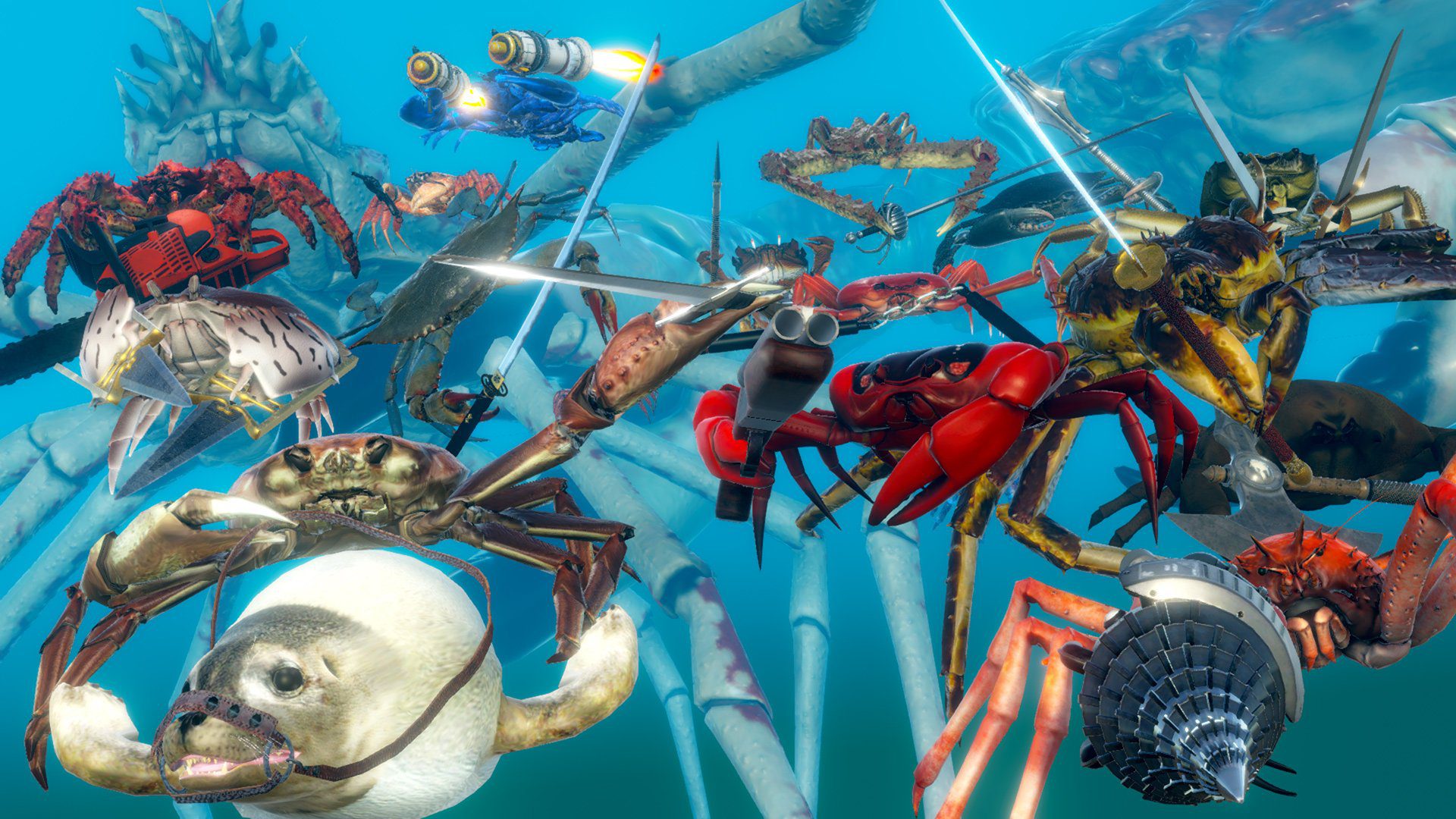 I like crabs. Do you like crabs? I keep a small group of hermit crabs as pets, one has been with me for over a decade now. So, my first question when going into Fight Crab was, “can I play as a hermit crab?”

The answer is no, sadly, but you do have the option of piloting a coconut crab, which is essentially a giant hermit crab. They grow up like hermit crabs — hiding their soft, delicious butts in gastropod shells — but eventually become too big and tough to use them anymore, so they just go naked. They’re the largest terrestrial arthropod in the world and are known for being mischievous.

That’s probably the most intellectual thing I’ll say in this whole review, because Fight Crab is an immensely stupid game, and I mean that as lovingly as possible.

Do you like Goat Simulator? Do you remember Road Rash 64? Did you get your doctorate in Surgeon Simulator? These are all really dumb games that you’ll probably get a lot more enjoyment out of if you don’t take them very seriously. Jump off that building. Spoke jam that hog with a banana. Break open that rib cage with an alarm clock. Have a bit of fun!

Fight Crab closely follows that philosophy. It sounds like every mechanic was proposed with the qualifier, “Wouldn’t it be funny if…”

It’s a game that is exactly what it says on the box. You pick from a growing assortment of crustaceans, then pinch your way to victory. Or maybe your claws aren’t enough for you. There’s also a huge selection of weapons for you to pick from. Everywhere from a sai to a lightsaber. Pick your poison, then duke it out in a number of equally bizarre environments like a medieval dining room, a supermarket display, or a table at a Chinese restaurant.

There’s actually a lot of stuff to choose from. There’s 23 types of crab ranging from the cute little snappers to Lovecraftian horrors from the nightmare corpse city of R’lyeh. If you throw down against them in the main campaign, you can rest assured that you can pilot their crabby carapaces, which includes all the big bosses. Size isn’t always an advantage, so you may need to experiment to figure out which crustacean works right for you.

Once you’ve picked your pinchers and filled them with deadly weapons, it’s time to get down and dirty with Fight Crab’s fumbly, bumbly combat system. Soul Calibur, this is not. Each stick controls one of your claw arms, the triggers are for pinching and punching, and the shoulder buttons are for grabbing and blocking. You move by pressing a direction on the d-pad, which sends your crab scuttling indefinitely until you tell it to stop. Or you can play with motion controls using the Joy-Cons if you hate your arms.

Simple enough, right? It is! Fight Crab is very pick-up-and-play, as there’s very little finesse needed with the controls. The crabs move like they’re submerged in molasses, so there’s a floatiness to all their actions giving you the opportunity to decide whether to go in for the offensive or shell up. Or you can just set your crab to go forward and start flailing; that works surprisingly well, too.

Which isn’t to say there’s no strategy involved here. Most of my online battles resulted in me getting my exoskeleton handed to me by people who have mastered the art of the motorized scooter or know how to combine a jet engine with a katana. There’s a lot of experimentation to be done.

Perhaps because the main event here is watching crabs fight, the campaign weighs in a little light. There are six stages and a trio of extra challenges. The stages can be tackled at various difficulties, adding a bit of replay value, but to get through it once won’t require you to reconfigure your calendar. Through the campaign, you can buy more weapons and level up your favourite crabs, though the leveling system seems a little inconsequential, as I never noticed a difference no matter how many points I crammed into each category.

One feature I appreciated is that most levels in the campaign can be played co-op after a certain point. I got my first chance to play Fight Crab on the same day my husband had a brutal experience at work. A little bit of salt-water brutality was just the ticket to get him cheered up.

It’s a very clumsy game, and that may be by design. Each crab takes some getting used to, featuring not only different weights, sizes, and speeds, but also different claw configurations. It is a lot easier to grab another crab with the fiddler’s big pincher than it is with the coconut crab’s downturned grabbers. Likewise, don’t expect to hit anything by sticking a double-barrel shotgun in the hands of a longarm crab. Those floppy appendages can barely withstand the kickback.

To win a fight, you have to knock another crab onto its back, and the physics behind doing so aren’t easily understood. Sometimes you can clip at the face of your enemy until they roll over, other times you can just bowl into them, sometimes the physics screw up and launch your prey several meters into the air, and occasionally they just refuse to tip like some sort of shelled Weeble. Getting up can be equally unreliable. The game tells you to punch wildly to flip over, but if this has any effect, I haven’t experienced it.

If you plan on taking this game seriously, you’re going to suffer some rage. Facets are janky, others are unreliable. The outcome of the match can be decided by who gets lucky with the physics. Skill definitely does play a factor, no doubt, but it can be easily trumped by misfortune.

Similarly, the game is a bit messy from a technical standpoint. It runs okay, the graphics are fine, and I never had an issue with the netcode, even as I mostly played against people from Japan. The soundtrack is fun, but maybe a bit repetitive. Its worst sin is that the UI is absolutely horrid. It gets the job done, but not without some confusion and ugliness.

If you’re willing to set your brain aside and just get down with some crusty bumping, you can count on having a good time. There’s a lot to be said about the spectacle of sea bugs throwing down with medieval weaponry. It manages to keep things smelling fresh by putting you through some absolutely bizarre situations, and you’ll never forget the first time a lobster comes at you with a revolver. On the other hand, this kind of stupid fun is always fleeting. You’re probably not going to spend a lot of time mastering the art of the death pinch, and once the novelty wears off, you’ll likely molt your old shell and move on.