What am I thinking?

If you know me, you know what a big comedy fan I am. Comedy is kind of my whole life, my passion, my raison d’etre, if you will. Videogames are obviously one of my other passions. So, when the two meet, I tend to be very hopeful, yet cautiously optimistic. Comedy in video games tends to be very hit or miss (as does comedy about games, but I self-aware-ingly digress) but when it works well, it’s a rare thing of beauty.

Stick It to the Man! is a thing of beauty. 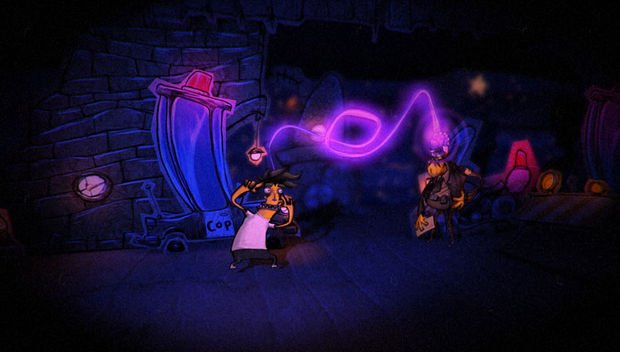 Ray Doewood is a schlub unlike any other. His day job testing different hardhats isn’t exactly spiritually fulfilling, but he’s generally happy, living with his girlfriend Arlene. However, after removing his latest hardhat and heading home during a rainstorm he is struck on the noggin by a strange object, and once he comes to he finds he has a giant pink arm coming out of his head that only he can see. This strange new appendage allows Ray some cool abilities, such as reading people’s thoughts, and taking items or even the very thoughts of people as stickers to use around the world.

The game is deliciously self aware, referencing the fact that the world looks two-dimensional, or even that it may all be paper (a pilot references that he’s flying a paper plane in the rain early in the game, respawn checkpoints are machines called “Mr. Copy” that re-draw Ray into the game). There’s tons of nods not only to general platformer tropes — such as Ray’s house being “all the way to the left” or how much jumping he has to do to get home from work — but also sly references to Mario and Luigi, and even a flat-out mention of Silver Surfer for NES in one characters inner monologue. But the cleverness isn’t only in the scripting.

While at its heart the game performs like a platformer, with Ray’s noodle brain-arm grabbing push pins around the world to get to higher ground or pulling down walls to reveal what’s inside buildings, the majority of the game is puzzle-based. Ray must use his new-found abilities to find clues to solve problems, like helping a family of clowns perfect a high-dive act, or using an Opera singer’s fear of the mob to slip past a road block. Many of the puzzles are inter-woven, so one puzzle’s solution will give you a sticker you need for a puzzle you may have discovered previously in the chapter that you couldn’t solve at the time.

You must do this all while avoiding secret agents, hell-bent on getting whatever it is Ray has in his head that gave him these abilities. See, they know what fell on him, and the shadowy mastermind behind it all known only as The Man — who is actually cleverly NEVER seen out of the shadows — wants it back. Desperately. Luckily, some of these agents are tired, so you can grab their thoughts of sleep to make them snooze briefly, or even Rays face from their thoughts and slap it on another agent to make them chase him while you slip away unnoticed.

The idea of reading thoughts and grabbing stickers formed by those thoughts is fantastic, and that coupled with the art style makes this look like the greatest Psychonauts/Paper Mario: Sticker Star mashup ever. In fact, I had to check a few times to see if Tim Schafer wasn’t involved in this game in some capacity. The dialogue is so sharp and so funny that I actually laughed out loud several times while playing, even replaying several sections to hear certain dialogue points again. 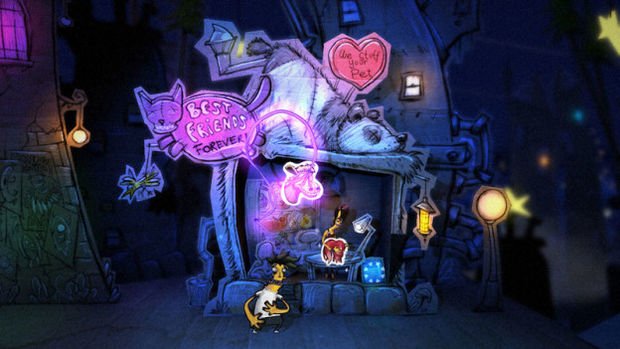 Even the levels are funny, from your standard stroll through a city, to escaping an asylum, and even the eventual trip through Ray’s shattered psyche, each mission is inspired and rife with minds to read and puzzles to uncover. Each character you meet has a cool little backstory and is fully voiced, with some you may need to reads the minds of a few times to fully get what they may be looking for. I spent most of the game just listening in on people’s thoughts…even dead people still had functioning brains you could eavesdrop.

If there is one gripe I have with the game, it’s that sometimes grabbing the right item with the head-arm (arm-head?) isn’t as precise as I’d like it to be. Often I grabbed a pushpin when I was aiming for an agent’s thoughts and popped up behind him and got zapped. I hope that on Vita you can just use the touch-screen to tap your subject to slap a sticker or swing around. That said, it didn’t happen often, and it was really more of being being sloppy with the controls than the controls being sloppy. I just needed to aim better.

If you haven’t caught on, I enjoyed the ever-loving crap out of this game. From the cast of zany characters — many of whom you may think are throwaways only for them to show up again in later levels — to the crazy art style, level and puzzle design, and whimsically hilarious script. Everything is pitch-perfect. And while Stick It to the Man! isn’t a particularly long title (it may only take you between three to five hours to complete the game’s ten chapters) there’s loads to observe and listen in on, and dozens of minds per level to explore, leaving you wanting more. I couldn’t get enough of it.

Filed under... #PSN#PSVita#Stick It to the Man