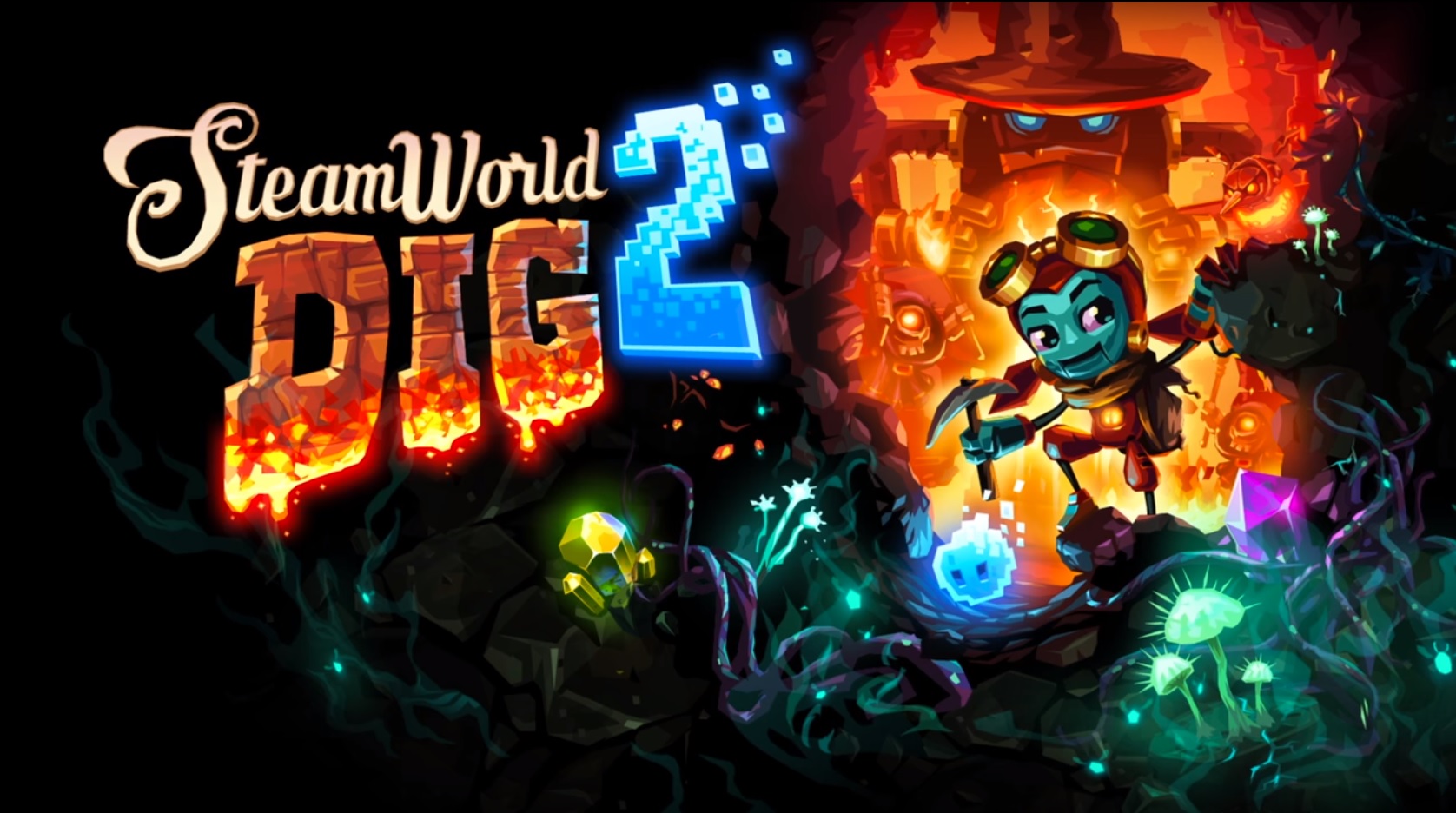 I was pleasantly surprised by 2013’s SteamWorld Dig, a 2D throwback that borrowed some of the best bits of Spelunky and Terraria and combined them into a charming, snack-sized platformer. The main gameplay loop is more fun than it sounds; you dig as deep as you can to find rare and more exotic ores, then sell those ores topside to buy upgrades that help you dig even deeper. 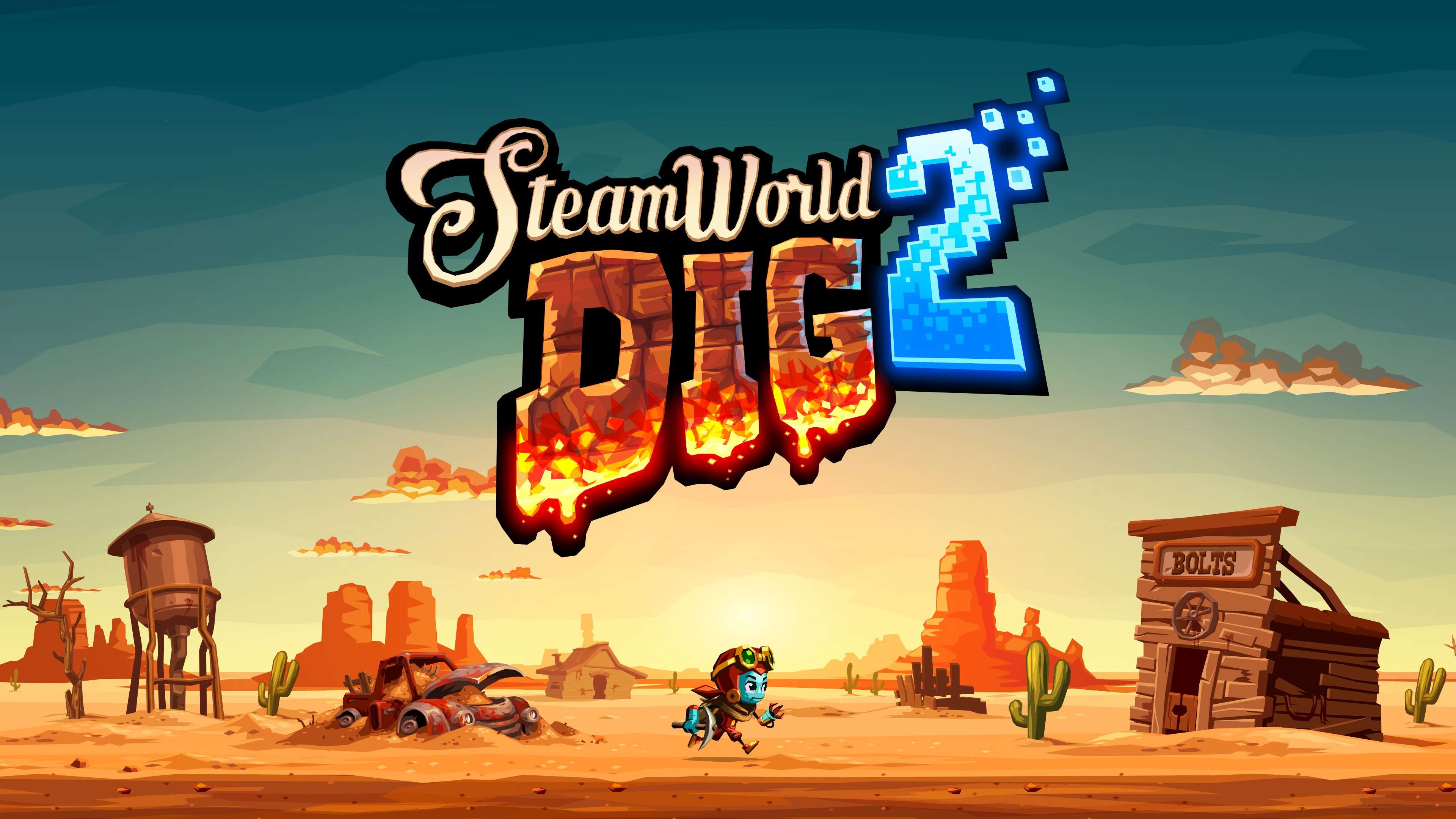 During the first game, Rusty dug his way from the surface all the way down to confront an evil artificial intelligence called Vector, and he hasn’t been heard from since. It’s been months since he went missing, and one of the town’s other residents, Dorothy, takes it upon herself to find out what became of him. Dorothy never ventured down into the mines before starting her expedition, so she doesn’t have access to the same upgrades Rusty picked up along his journey. Fortunately she can find some of her own, and eventually surpasses her predecessor in every way that matters.

SteamWorld Dig 2 takes the same basic gameplay from its progenitor, but expands it in every direction. You’ll still dig deep beneath a steampunk old West town, returning to the surface to sell your glittering treasures and buy upgrades before heading back into the depths. You still find upgrade stations just before you need them, and you’ll still need to manage your health, water, and light levels as you explore the caverns beneath El Machino. The first game borrowed some elements from Metroid-style games, especially the idea of using your tools as keys that let you further explore your environment. SteamWorld Dig 2 really leans into the idea, and borrows much more heavily from Metroid.

This shift is most obvious in the environment you’re exploring. SteamWorld Dig had a map, but there wasn’t much need for it, as Rusty pretty much dug straight down until he found the AI core. SteamWorld Dig 2 has several distinct areas, and they’re all interconnected. Early on, Dorothy meets an AI spirit with an appetite for destruction who serves as a guide and maps everything she comes across. This feature can be turned off for those who want more of a challenge. I noticed right away that there’s more of a focus on horizontal platforming challenges, and Dorothy’s upgrades include two of my favorite platforming tools, a grappling hook and a jetpack.

Once Dorothy finds a few upgrade stations, she can make use of some hidden collectibles called cogs to upgrade her abilities. Cogs can be assigned to blueprints, unlocking perks for the gear they’re assigned to. Some blueprints are trickier to get than others; most you’ll find on your adventure, but others require you to trade for hidden “artifacts” from the world that came before. Cogs and artifacts can be found in hidden locations pretty much everywhere, so it’s always worth your while to go exploring off the beaten path. The cogs can be reassigned anytime at a workbench in town, so there’s no harm in experimenting with a build and changing it later if you don’t like it. There aren’t enough cogs to unlock every upgrade, so choosing whether to prioritize your pickaxe’s attack or making sure you never run out of light is up to you. 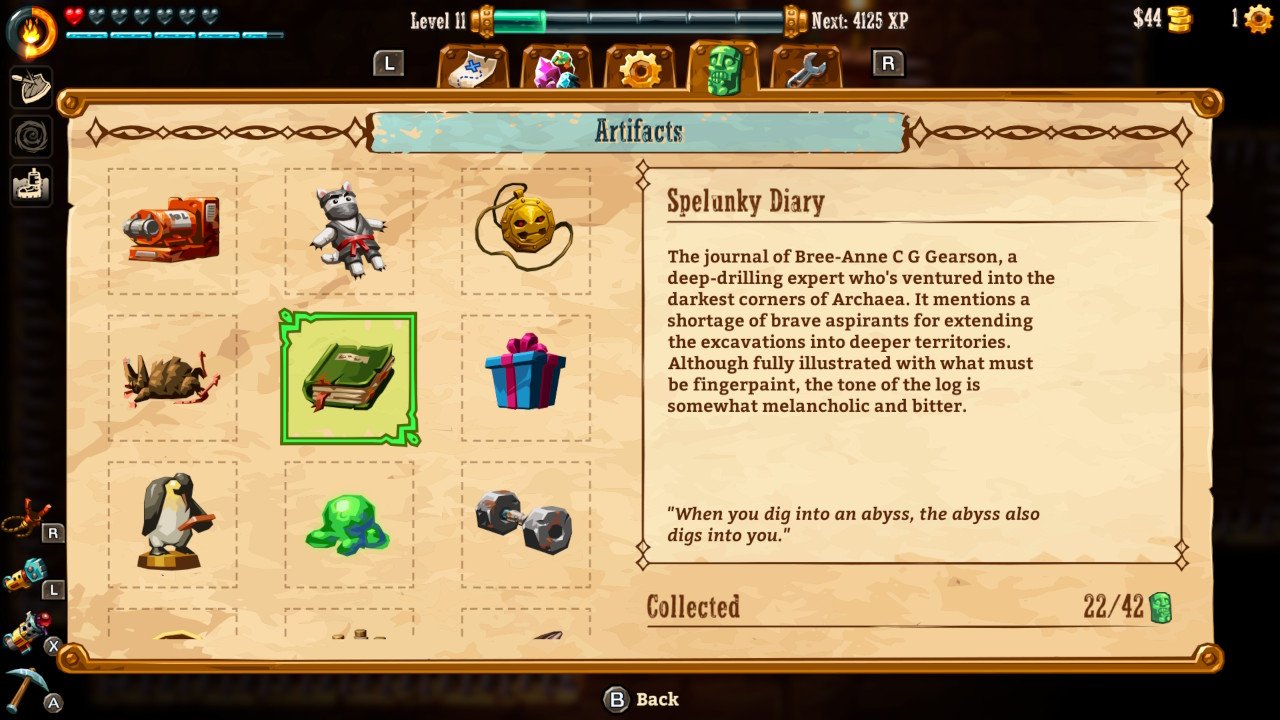 The underground worlds Image and Form created are absolutely gorgeous. The first cavern is an ancient, overgrown temple, but there’s also a dry, dusty mine directly beneath the city, a fungal cavern filled with bioluminescent mushrooms, and a fiery shrine overrun with doomsday cultists. The world’s a lot bigger, but there are lots of pneumatic tubes scattered about Dorothy can use to teleport from area to area. The enemies and obstacles are all vivid and detailed, and I especially enjoyed swatting explosive, poisonous fairies at the crystallized acid jello in the mushroom forest. The ‘bots back in town all have their own personalities as well, and every upgrade and ability has a silly name with a description influenced by pop culture, often based on other games, music, or musicians.

The challenge level felt perfect, though you can grind a bit by bringing every scrap of ore up to the surface and upgrading your systems before you make a descent. Every upgrade you find is incredibly useful, and the caves off the main path allow you to demonstrate mastery of one of your skills in exchange for cogs and artifacts, and usually a nice bit of treasure. Completing a cave will show a check mark on the map, so it’s easy to tell whether or not an area is worth revisiting. Tracking down every collectible earns you the right to tackle an optional bonus dungeon, something I’m struggling with even though I’ve fully upgraded Dorothy’s abilities. 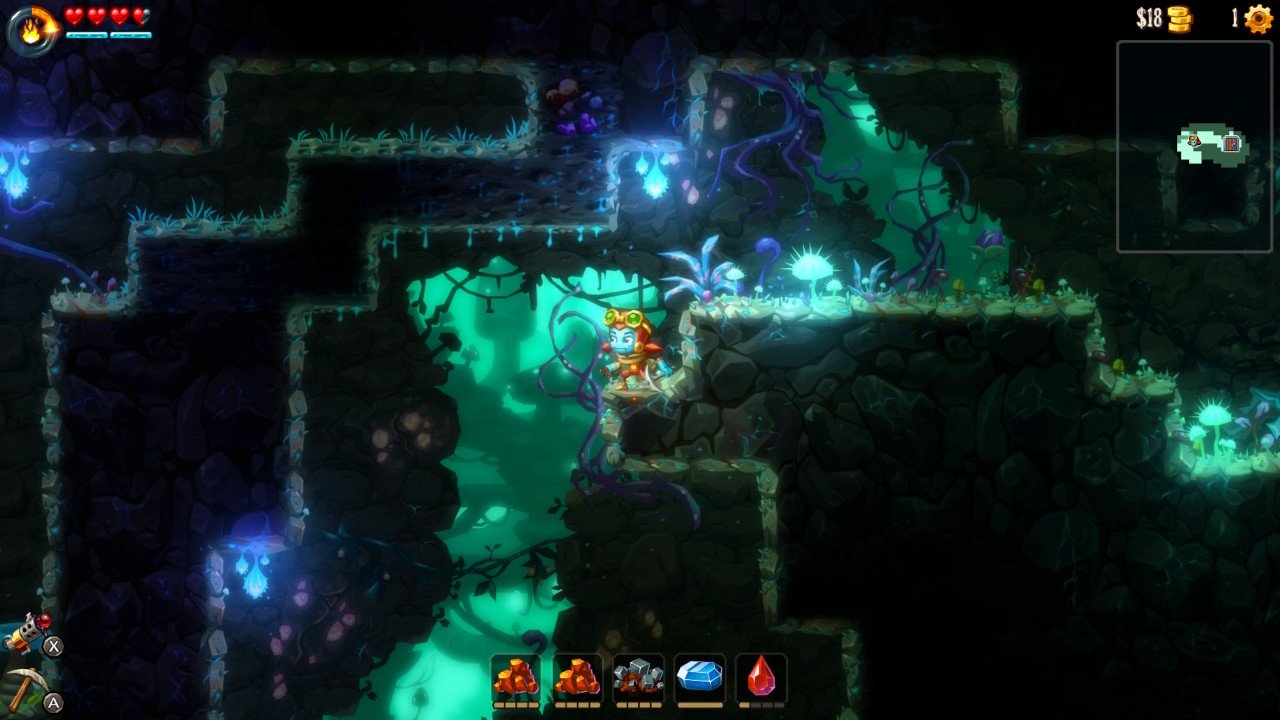 The music is pretty low-key, so it’s a good game to play while listening to something like a podcast. For some reason, the main town’s theme seems to be based on the Five Stairsteps’ “Ooh Child (Things are Gonna get Easier),” and I’m not sure if it was intentional, but it sort of fits the theme of the game. Every upgrade does make your life a little easier, after all. Still, it was hard not to think of Peter Quill challenging Ronin the Accuser every time I returned to town. Someday, we’ll walk in the rays of a beautiful Sun.

There were a few subtle changes made to make the game a little less punishing than its predecessor. Water pockets underground are no longer a finite resource, and explosives are no longer something that needs to be purchased in town. Dorothy doesn’t drop money when she dies, but she still loses some of the ore she has on her. It’s unlikely, but if you die too many times, it’s still possible to get into a situation where you might have to farm enemies for “blood stone” drops to unlock a piece of vital equipment. 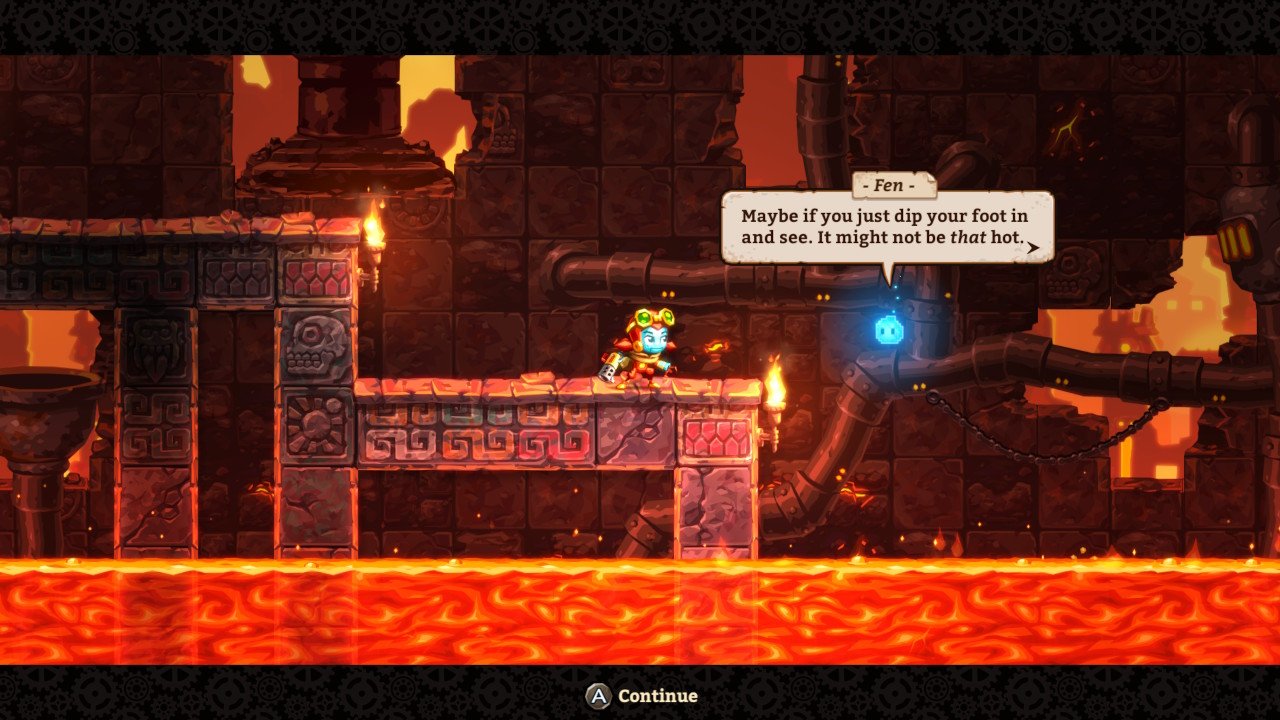 SteamWorld Dig 2 is a worthy addition to any library, but stands out on the Switch because it works great as a portable game and also looks amazing on a big TV. I took about 15 hours to track down every collectible, but it’ll probably take most people around ten for their first playthrough. It’s perfectly playable with the Joy-Con, but I used a Pro Controller for most of the game to take advantage of the cross pad. If you haven’t gotten your fill of Metroid gameplay after playing Samus Returns, you’ll definitely enjoy delving into SteamWorld Dig 2.